These were lunchbox staples back in the day.

In a lifetime as a cookie-lover, dozens (if not more!) of fantastic cookies come and go from the store shelves, for various reasons. The company may go out of business, the cookies didn't sell as well as expected, or the cookie style may change. It can be a real heartbreaker!

Read on to find out which cookies loved us, left us, and aren't ever coming back. Then head to your kitchen and enjoy your favorite store-bought cookie. You never know, it might be the last time you get to eat it.

These fan-favorite s'mores crackers featured a chocolate, marshmallow-flavored filling sandwiched between its classic buttery crackers. More of a cookie than a cracker, these treats were discontinued in 2016. They did make a brief return in 2022, but only as a giveaway.

These bars, which featured cheesy goodness on top of a crunchy cookie, topped with strawberry or other fillings, had enough loyal fans that over 43 thousand of them have signed a petition begging for their return.

These soft shortbread cookies were stuffed with chewy gooey fudge or peanut butter fillings. There have been plenty of petitions to bring the Magic back, but none have succeeded yet.

These delicate, lemony cookies were discontinued when Sunshine merged with Keebler and people have been seeking the perfect copycat version ever since. Try this recipe from Top Secret Recipes.

These cookies, popular in the 1980s, were sort of like vanilla Oreos, but they had smiling faces on them and had both vanilla and chocolate fillings. The faces were a little creepy, but not creepy enough to stop them from being a lunchbox staple. 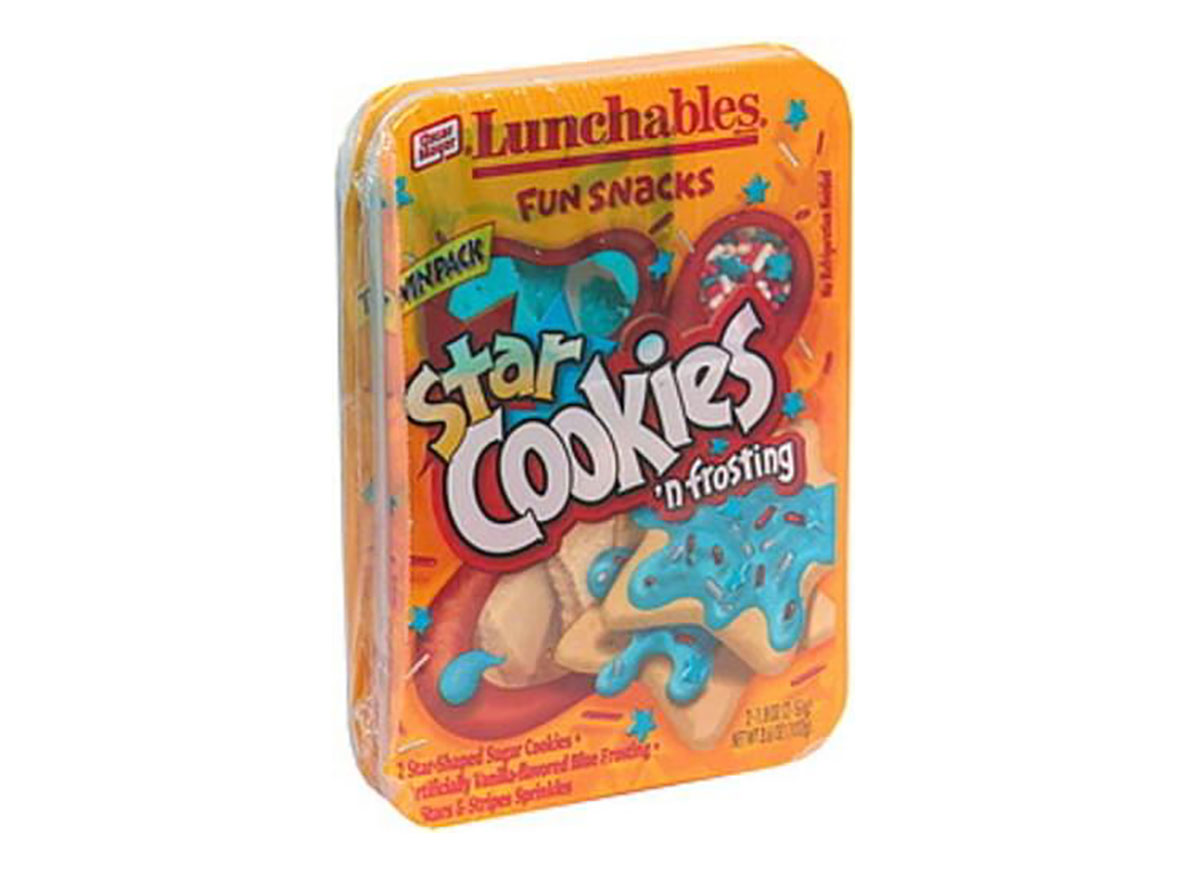 Lunchables are pretty much an iconic lunch box meal from the '90s, and the cookies and frosting packs enjoyed the same success. These decorate-your-own-cookie kits came with two cookies and sweet, spreadable icing you could smear on yourself – chocolate, s'mores and more – but blue icing was the winner.

Oreos seem to make their way into countless dessert recipes, but even the chocolate sandwich cookie brand isn't immune to product cancellations. The mega-sized Oreo Big Stuf cookie isn't on shelves anymore, though you can still get oversized Oreo cookies in products like the Klondike Oreo ice cream sandwich.

This 1970s favorite was a sweet mix of coconut, chocolate, and caramel, somewhat like a Girl Scout Samoa cookie. They were discontinued when Keebler bought up the maker, Sunshine.

These peanut-shaped cookies with peanut butter creme inside were a peanut butter lovers' dream. Despite their popularity, the cookies, which launched in 1992, were gone from store shelves by 1995.

Cookie-shaped versions of the chocolate turtle – cookies studded with pecans and caramel and covered with chocolate – were named after Juliette Low, founder of the Girl Scouts. They were discontinued in 1985 and brought back from 1993 to 1996.

RELATED: You Can Now Get Your Favorite Girl Scout Cookies Delivered

Instead of the soft baked middle of the original Moon Pie, these treats had crunchy cookies inside, with the creamy filling and chocolate covering of the original. The crunch version seems to have disappeared from store shelves over the past few years, sadly.

With vanilla, chocolate, and even peanut butter flavors, Star Wars cookies were similar to Teddy Grahams, though they predated them by several years. They're no longer around, but there's no shortage of merchandise for Star Wars fans, even including an Instant Pot collection.

Fig Newtons still come in multiple flavors, but apple isn't one of them.

Tanya Edwards
Tanya Edwards is a seasoned food and health journalist, who has held roles at Yahoo Health as Managing Editor and at Food Network as Programming Director. Read more about Tanya
Filed Under
Cookies // Dessert // Discontinued // Groceries // Snacks