The 11 Most Heartbreaking Food Recalls of All Time

In food we trust. But we shouldn't.

We all put a lot of faith in our food. We mindlessly add items to our shopping cart without thinking about where they've been, who's touched them, and how they got there. We bite into an apple that we haven't washed or try a supermarket sample without asking questions. We fall in love with certain brands whose CEOs focus solely on profit instead of health impacts, and we try weight loss trends before they've been scientifically backed.

Unfortunately, that blind trust can backfire in multiple ways—one being food recalls—and we only find out about the ill effects of certain foods after they've taken their toll. Companies are forced to cancel sales and take their products off the market only after they've been linked to certain illnesses or after certain foreign objects have been found in their food. As if that's not bad enough, some of our all-time favorite foods can fall from grace and be in danger, too! If you rely on a certain food or restaurant, it can be a little devastating to find out that something is now blacklisted, at least temporarily. We've compiled a list of all the times a food recall has broken hearts and changed lives forever.

If you're the type of person whose go-to meal is pasta and meatballs, chances are we can find parmesan cheese in your refrigerator. And chances are we can find some wood particles in that parmesan. Wait, what? Yes, you read that right. Parmesan cheese brands like Kraft and Organic Valley have come under fire recently for adding wood pulp to their grated parm recipes. Wood pulp is exactly what it sounds like: wood particles ground down to make a pulpy substance. Its cover name is "cellulose" and it's found in the majority of those supermarket parmesan cheeses you love so much. According to experts, an acceptable level of cellulose in food is 2-4 percent, but many supermarket brands tested up to 9 percent cellulose. All hell broke loose in 2012 when the FDA showed up unannounced to Castle Cheese Inc. in Pennsylvania to test the ingredients in their cheese. They found a product that was less than 40 percent cheese and mostly wood particles—yikes! Wood-filled cheese definitely needs to be added to our list of horrifying things found in food. Thankfully, this discovery resulted in massive recalls and recipe remakes for parmesan companies across the nation. But parm lovers were never the same. 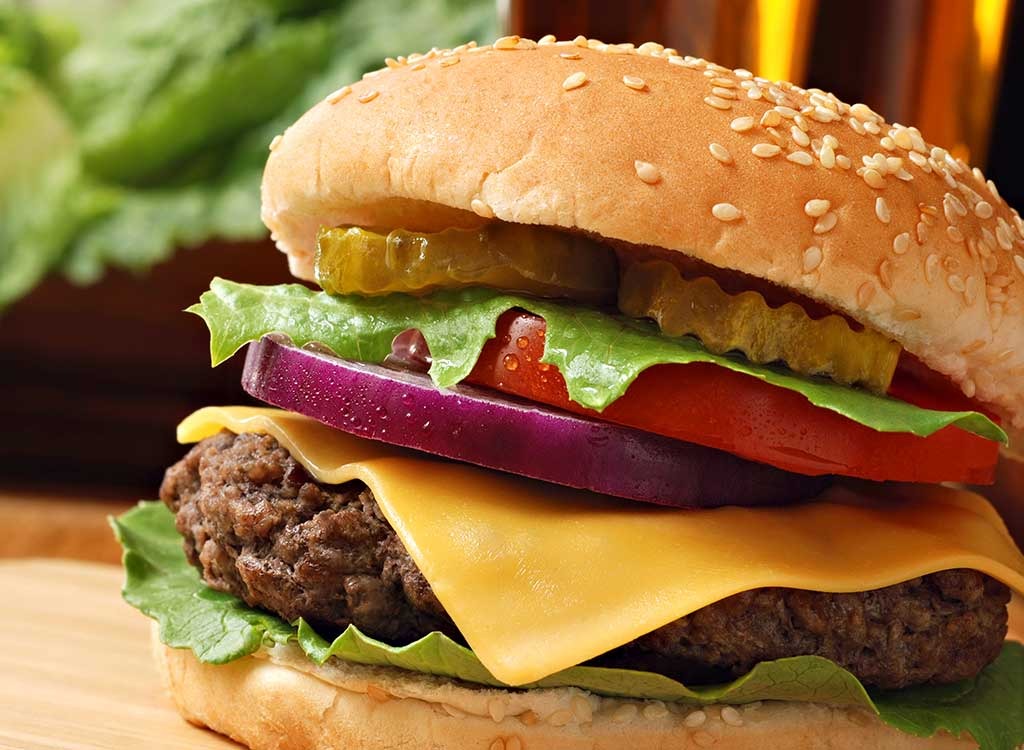 Ready to get really mad? Think back to this recall that ruined your favorite BBQ food forever. People went mad in 2003 after the first American case of mad cow disease was officially diagnosed in Texas. Since then, there have been major recalls on American hamburger meat that has been suspected of contracting Bovine Spongiform Encephalopathy (BSE), aka mad cow disease. When humans consume meat infected with BSE, they can develop a fatal brain disease known as Creutzfeldt-Jakob disease that severely alters behavior and movement. The most recent recall happened in 2014 when over 4,000 lbs of beef products were recalled from supermarkets across the nation—most notably Whole Foods.

The world can be a cold, cold place. Especially when your favorite frozen dessert gets recalled big time for suspected Listeria contamination. A big-name, Texas-based freezer aisle ice cream company, Blue Bell, was forced to recall its products in April 2015 and subsequently lay off many of its employees as a result of Listeria detection in its factory. Listeria hysteria ensued. According to the CDC, 10 people were hospitalized and three were killed in relation to the Blue Bell ice cream scandal. Afterward, other brands came forward confessing their own Listeria crisis. On the mild end of the spectrum, Listeria causes flu-like symptoms, but those more at risk (pregnant women, the elderly, and young children) could suffer from more serious complications. As a result, many reluctantly put the spoon down as they waited out the cone contamination that rocked the ice cream world.

Bonus: If you're still spooked by the ice cream Listeria recall and want a dairy fix, try one of these greek yogurts!

If you're a member of the Chipotle cult, you probably already know about this one. And if you're not, you probably still know about this one. Chipotle seemed to be on track to fast casual sainthood when suddenly it was struck with a string of food contaminations that knocked the chain down, repeatedly. The food born illnesses linked to Chipotle went media viral and became front page news across the country as many mourned the tragedies that plagued their beloved burrito joint. The timeline of Chipotle recalls goes something like this: In September 2015, Minnesota Chipotles were linked to a string of salmonella outbreaks in tomatoes. Shortly thereafter, 43 restaurants in the Pacific Northwest were closed for E. coli contamination. Chipotle's bad luck found its way to the East Coast that December when a Boston Chipotle shut down due to many customers contracting norovirus from the food. More and more E. coli and norovirus cases broke out across the nation and Chipotle hung on for dear life. Thankfully, the company hasn't had any health issues and has to improved sanitary standards to earn their good reputation back. If you're jumping back on the Chipotle wagon, here are some healthy menu tips to get you started. 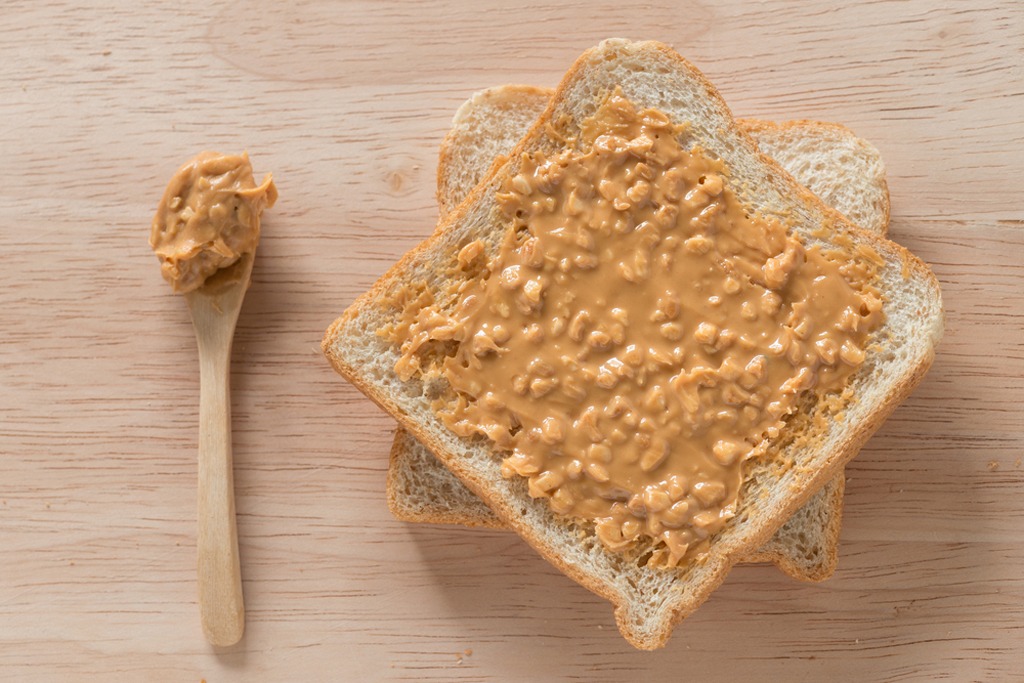 Everybody's go-to bread spread had a pretty scary moment back in 2008. when the Peanut Corporation of America (PCA) was caught distributing salmonella-infected peanut butter across the nation. The recall was the most extensive recall in U.S. history since many of PCA's products were distributed as ingredients to other food companies before being put on the market. Members of its ownership have since been convicted of covering up the contamination that killed 9 people and infected another 714. Since then, nut butters have made a major comeback—but we'll never forgive PCA for bringing such shame to our favorite healthy fat.

This one is a real heartbreaker. The easy, cheesy pasta that everyone loved as a child is going metallic! No. That's not something to get excited about. In 2015, Kraft recalled 242,000 boxes of its classic stove-top mac n' cheese after customers found metal shavings in the boxes. The company believes that a piece of stainless steel got wedged in a piece of machinery and shattered into the mac as it was being packaged. Chomping down on a piece of metal is a surefire way to ruin any fond childhood memories you have of eating mac n' cheese.

Do you want to lick the spoon? Not anymore! One innocent lick of cookie dough can lead to a week of nausea, vomiting, and diarrhea. And, in some, it can result in kidney failure. This past year, General Mills—one of the leading distributors of flour in America—issued a major recall on many of its raw flour-based products (like cookie dough) as a result of widespread E. Coli poisoning. Approximately 10 million pounds of flour were recalled in this food scandal and a grand total of 42 people were infected with the severe illness. Yes, cookie dough might not do the best things for your toned body, but it's hard to picture a world where sneaking a little lick of dough while baking isn't allowed.

This one was truly a loss for foodies across the nation. Everyone's precious creamy dip is yet another product to add to the chronicles of Listeria. Supermarket hummus has taken off in recent years due to its delicious taste and numerous health benefits. Brands like Sabra, Tribe, and Cedar's have gained significant popularity in the specialty foods aisle. However, the popular hummus brand, Sabra, is not only #1 on our list of worst supermarket hummus brands for your health, but it was also contaminated with Listeria in 2015—a bacteria that gives consumers Listeriosis. Listeriosis is an illness marked by flu-like symptoms as well as headaches, stiff neck, confusion, loss of balance, and convulsions. About 30,000 cases of Sabra's classic flavor were recalled under suspicion that they had been contaminated with Listeria. Thankfully, no customers were infected. 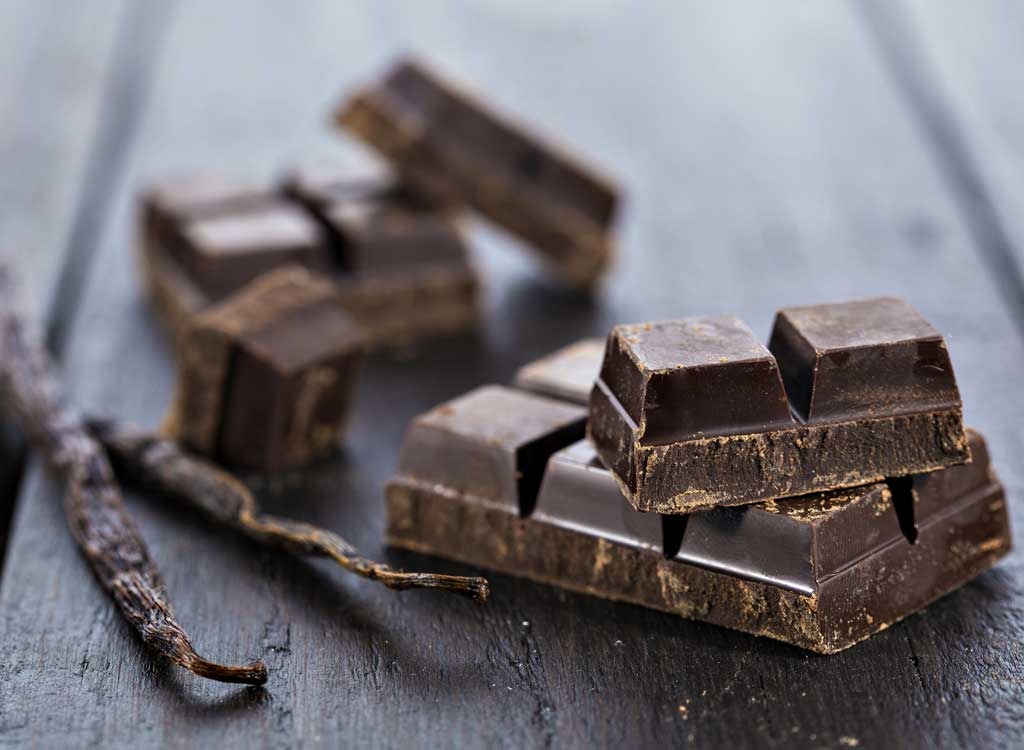 For many people, chocolate is the most sacred indulgence. So, is there anything more devastating than waking up one morning to find that it has been taken off the shelves? Chocolate (particularly, dark chocolate) had been making major strides in the health world, hailed for its high levels of antioxidants and metabolism-boosting effects. But in August 2006, chocolate giant Cadbury recalled more than a million chocolate bars because they discovered that their chocolate had been contaminated with salmonella, due to a pipe leaking in the factory. The recall took a huge hit on the company—which lost about $30 million—but took an even bigger hit on the emotions of chocolate-lovers around the world. 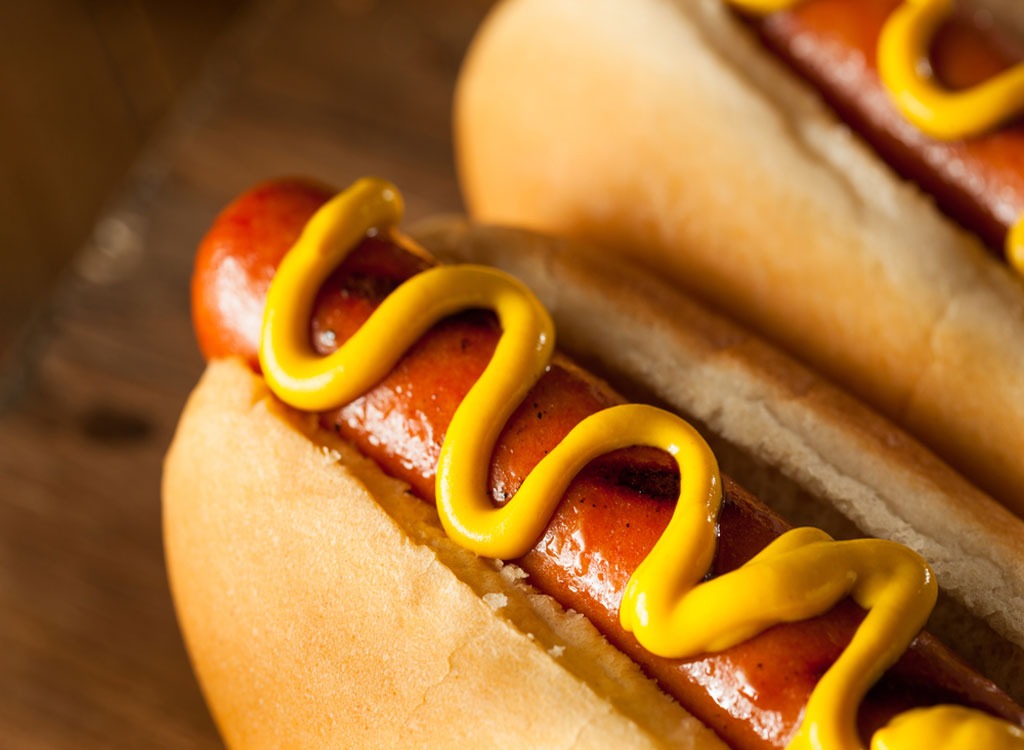 We're throwing it back with this one. In 1998, we saw one of the most devastating product recalls of all time. Some may even say this is the Listeria outbreak that started all the hysteria. In 1998, Sara Lee recalled 35 million pounds of meat—most of which included hot dogs—when it was found that these products were linked to 100 cases of Listeria and 21 deaths. The recall stunned the nation. After all, is there anything more American than a good ol' frank on a bun? Since then, Listeria has been at the forefront of the FDA's priorities as many companies (like Blue Bell and Sabra) have been forced to recall their products based on suspected Listeria contamination. The recall almost knocked Sara Lee out for good, but thankfully we Americans are loyal hot dog eaters (even if they don't help us melt our love handles). The company got back on track and we got right back to eating our franks. 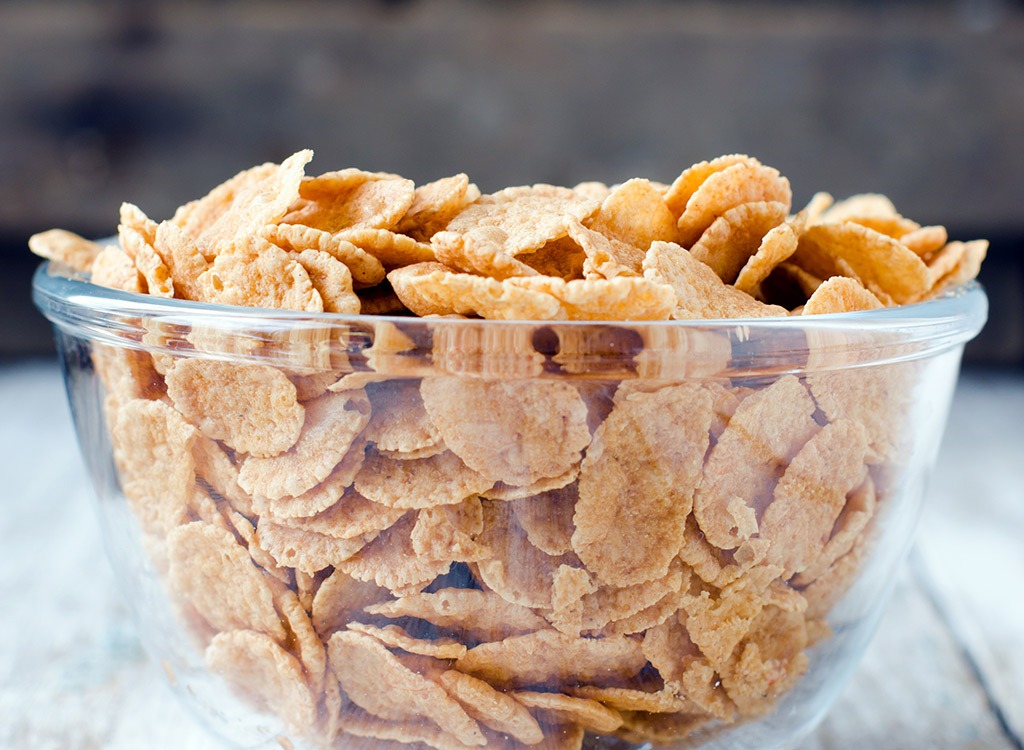 Mmm, who doesn't love a good bowl of cereal for breakfast or before bed? Unfortunately, the days of innocent cereal consumption are over. In 2013, Kellogg recalled 36,000 packages of Special K cereal due to complaints that customers had found shards of glass in their cereal. Hey, we're all about adding stuff to your cereal—especially if it makes it more nutritionally sound. But glass shards? That takes artificial ingredients to a whole new level and sounds really painful!

Bonus: For ways to eat cereal and keep your weight loss progress on track, check out our list of best cereals for weight loss!