20 Foods You Should Never Store Near Each Other

Thanks to a gas called ethylene, your fruits and vegetables could be sabotaging each other—and you wouldn't even know it!

While it may feel like common practice to store fruits and vegetables in the crisper drawer of your fridge or in that fruit bowl on the counter, doing so may actually doom your food from the start. This may seem like the freshest place to store your produce, but every crop isn't alike. There are actually foods you should never store near each other thanks to ethylene, which can actually ruin other foods around it!

Ethylene is a gas hormone that is emitted from particular fruits and vegetables when they are ripening. According to the International Plant Growth Substances Association, ethylene is produced in all higher plants, and typically varies based on the type of tissue the produce has. This is why you'll commonly see fruits as ethylene producers compared to vegetables—because they bloom on trees above the ground.

That's why it is essential to store ethylene-producing crops far away from ethylene-sensitive crops. The best way to do that is by designating ethylene producers to fruits bowls on the counter, and ethylene sensitive foods in the refrigerator. However, this may not always be the case, especially in terms of potatoes and onions (which, yes, should never be stored together). Sometimes even freezing food is the best option!

The United States Department of Agriculture (USDA) Food Safety and Inspection Service, along with Cornell University and the Food Marketing Institute, created an online guide for consumers to easily look up the proper storage time for each item—which we have listed out below. Along with data from the Postharvest Center at the University of California, we were able to determine how this gas specifically affects the produce listed here—both as ethylene producers and ethylene-sensitive crops.

See the 20 foods you should never store near each other. Keeping these foods separate from each other (ethylene-producing foods away from the ethylene-sensitive foods) can help your produce last longer.

Ethylene may sound scary, but don't worry, it's completely natural. It's a gas that helps to ripen fruit or vegetables into that perfect, juicy produce that we all know and love. Here are some of the more common ethylene producers.

Apples are probably one of the most common ethylene producers, so keep them far away from your other produce! However, what's interesting about apples is how ethylene affects it based on how long the apple was harvested. If the apple was picked before reaching a peak in harvest, the ethylene may cause the apple to scald, which makes the skin turn brown. Apples last three weeks in the pantry, 4 to 6 weeks in the refrigerator, or 8 months in the freezer. So if you buy some apples, it may be best to store them in a bowl in the center of your table, all by themselves. It's safer that way!

Avocados don't ripen on the tree, which is why picking the perfect avocado is quite a difficult ordeal. Ethylene production happens after the avocado is plucked from the tree, and will increase as the avocado continues to ripen. An avocado is ripe when it feels tender and the skin color has darkened. They usually only last 3 or 4 days in the refrigerator.

The ethylene in the banana is released from the stem, so you can keep bananas fresh by wrapping the stems with plastic wrap. Because ethylene production happens quickly, it's important for bananas to have little exposure to carbon dioxide in order to delay ethylene from releasing. In order to keep bananas from ripening during transport, special boxes or ripening rooms are used. Once bananas hit your preference in ripeness, they will last 3 days in the refrigerator. Bananas also last 2 to 3 months in the freezer.

Surprisingly, some melons (like honeydew) actually produce ethylene, unlike other melons (like cantaloupe) who are sensitive to it. Honeydew will ripen slower pre-cut, but ethylene production increases once it is cut. It seems shocking that these two fruits are usually served together, right?

Melons can be ripe in the pantry for seven days. You'll know if it's ripe if the fruit is tender. Melons will last 2 weeks in the refrigerator, but if you open up the melon, it will only last 2 to 4 days. It can stay frozen for 1 month.

While ethylene production for a mango is smaller compared to other fruits, it will still ripen from the gas. Mangos can stay in the pantry for 3 to 5 days, or up to 1 week in the refrigerator. You can store them in the freezer for 6 to 8 months.

Similar to mangos, pears will ripen faster when exposed to warmer temperatures, but at a much faster pace. If you want the ripening of a pear to extend for a longer period of time, putting the pear in a colder environment will reduce ethylene production. Pears can last 1 to 2 days once they are ripe in the pantry. They'll last 3 to 5 days in the refrigerator, or 2 months in the freezer.

The ethylene production for these two fruits is very similar. When a peach or a plum is unripe, the ethylene production is very small. However, as the fruits continue to get ripe, ethylene production spikes. Peaches and plums have the same shelf life as a pear: 1 to 2 days once ripe in the pantry, 3 to 5 days in the fridge, or 2 months in the freezer. So if you're looking to ripen a peach for one of these peach recipes, leaving it out for a day or two may be the fastest way to get it ripe. Just don't store it near anything else! 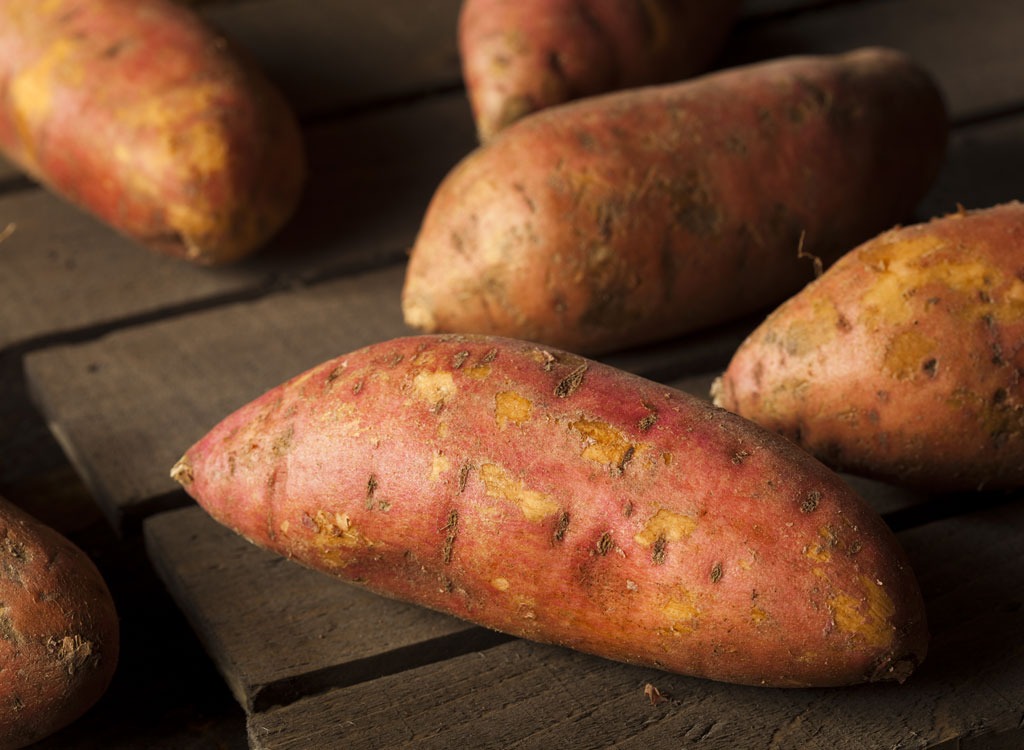 Compared to other ethylene producers, potatoes (both regular and sweet) release a very small amount of ethylene. The ethylene rate will increase if the potatoes are chilled, wounded, or start to decay. Potatoes have a pretty long shelf life. They can last in the pantry for 1 to 2 months, which is actually longer than their 1-to-2-week shelf life in the refrigerator. It's actually recommended to store potatoes in a pantry at room temperature. You can freeze potatoes for 10 to 12 months, but only if they are already cooked.

Because ethylene production for tomatoes happens at a moderate rate, tomatoes can be stored in the pantry up to 7 days once they are ripe. However, because exposure to ethylene can affect numerous vegetables negatively, it's highly recommended to store tomatoes like other ethylene-producing "fruits"—in a basket by themselves. Surprisingly enough, the USDA doesn't recommend storing them in the refrigerator because it may affect the flavor, so don't even bother putting them in the refrigerator door with those other vegetables. If you want them to last, tomatoes can be in the freezer for 2 months.

While some ethylene-sensitive crops can also produce a very small amount of ethylene during ripening, it isn't significant enough to make a difference for that plant. That's why it's important to keep ethylene-sensitive foods away from ethylene producers; it will ripen them quicker. Here's what to keep away from the fruit bowl.

Ethylene accelerates lignification of asparagus, also known as "toughening" of the asparagus spears, and will even cause the vegetable to yellow. Asparagus should always be stored in the refrigerator, and will last 3 to 4 days. They'll last a much longer time in the freezer (up to 5 months).

When exposing broccoli to ethylene producers, the shelf life is reduced by 50 percent. The broccoli florets will start to yellow. When stored separately, broccoli only lasts 3 to 5 days in the refrigerator, so if near an ethylene producer, that's a very short shelf life for this vegetable! However, broccoli lasts up to 10 to 12 months in the freezer, so freezing may be your best bet for keeping this vegetable fresh.

While Brussels sprouts can produce a small percentage of ethylene compared to other green or leafy vegetables, it is more sensitive to ethylene than anything. When exposed, Brussels sprouts will start to yellow and some of the leaves will detach. Stored separately, Brussels sprouts have a similar shelf life to broccoli: 3 to 5 days in the refrigerator, and 10 to 12 months in the freezer.

Similar to broccoli, cauliflower is highly sensitive to ethylene. The vegetable will start to yellow and the leaves will detach themselves from the stalks, so it's highly recommended to store away from ethylene producers like apples, melons, and tomatoes. Cauliflower and broccoli have a similar shelf life with just 3 to 5 days in the fridge, and 10 to 12 months in the freezer. 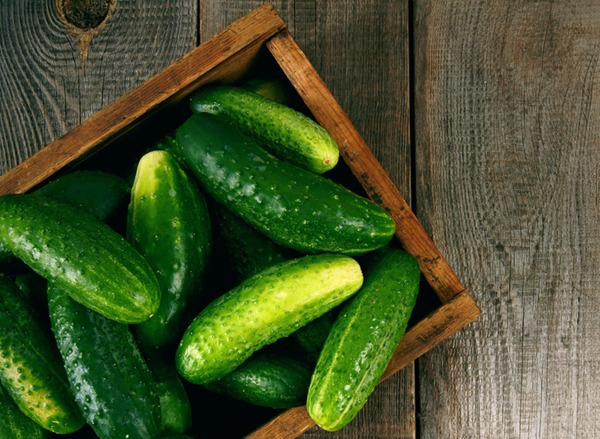 Most gourd vegetables tend to be sensitive to ethylene, including cucumbers. Cucumbers will experience an accelerated yellowing and decay when exposed to ethylene, especially around bananas, melons, or tomatoes. Cucumbers will last 4 to 6 days in the refrigerator, but the USDA does not recommend freezing cucumber. So you better eat up that cucumber quickly!

Some fresh herbs are more sensitive to ethylene compared to others. Marjoram, mint, parsley, and oregano are very sensitive to ethylene. Others such as sage, thyme, basil, and rosemary aren't affected as much. When exposed, herbs will start to yellow, experience epinasty (when the stem curves), and leaves will start to fall the stem. In the fridge, herbs will last 7 to 10 days. They can last 1 to 2 months in the freezer.

Although some types of leafy greens can last longer than others, most are highly ethylene-sensitive. Romaine and spinach will discolor in certain spots, and even experience some spotting. So if you plan on making a salad with leafy greens that mixes with an ethylene producer (like apples or tomatoes), it may be wise to make the salad fresh and consume day-of for the best quality. In terms of proper storage, lettuce will range based on type. Spinach can last 3 to 7 days in the fridge; Iceberg and Romaine can last up to 1 to 2 weeks; Any bagged lettuce—such as leafy greens, spinach, or mixes—will last 3 to 5 days after opening.

Onions have long shelf life similar to potatoes, which is why people tend to store these together. However, because potatoes do produce a small amount of ethylene, onions will start to sprout and even grow a decay-causing fungi. When stored separately, onions last 1 month in the pantry, 2 months in the refrigerator, and 10 to 12 months in the freezer. Because these have a longer shelf life in the refrigerator compared to the potato, it may be best to store your onions there—far away from your taters!