13 Foods to Eat When You're Sick

If you're curled up on the couch taking your temperature every 30 minutes (or know that at some point this season you will be), we've got exactly what you need. Nope, it's not another round of meds. It's expert intel on Mother Nature's fiercest sickness suppressors.

Whether it's Sheryl from accounting or your spotting partner at the gym, someone is going to sneeze near you and make you sick this season. It's only a matter of time. But loading up on meds isn't always the best or the only way to get back on your feet. From coughing and sneezing to sinus drainage and body aches, there are certain foods can act as nature's medicine to squash those symptoms. Some of these healthy bites can even boost your immunity so your body will do a better job at fighting off illnesses in the future!

So, consider the foods below your go-tos when you're feeling under the weather. And if you think your sniffles may have been brought on by allergies, don't miss our special report, Eat This, Not That! to Fight Allergies.

Get this: Swallowing two teaspoons of honey has been shown to keep coughs at bay in those with upper respiratory infections, according to a study published in the journal Pediatrics. Even though the report examined honey's effects on children, there's no reason to believe it won't aid ailing adults, too. If you can't imagine eating the stuff right from the jar, try drizzling honey on a piece of Ezekiel toast, mixing it into your oatmeal, or adding it to hot tea to soothe your throat and reduce your cough.

They may be goofy little guys, but The Minions' obsession with bananas is totally warranted. Not only are they a potent source of the fat-burning nutrient, choline, they're rich in potassium, a nutrient that fends off bloat. The yellow fruit also has a lot going for it when it comes to fighting off illnesses. The main reason: They're high in magnesium, an electrolyte that helps fight pain. The mineral has been studied for its ability to fight headaches, including notoriously hard-to-treat migraine headaches. Because people with migraines often experience stomach problems simultaneously, bananas are a great snack because they can calm your tummy, too.

If you're suffering from a less-severe "regular" headache, check out our guide to the 20 Best and Worst Foods for Headaches.

When you feel like your body is becoming overrun with phlegm, turn to pineapple, which contains the compound bromelain. According to the University of Michigan Health System, bromelain has been shown to thin mucus associated with conditions like sinusitis. Top your morning oatmeal with pineapple or incorporate it into your favorite smoothie recipe to stay hydrated, sneak in a dose of bromelain, and transport your brain to happy, tropical place that's sniffle-free.

Jasmine Rice to Help You Sleep

If you're feeling kind of woozy or having a tough time falling asleep, a cup of rice can be your savior. Not only is rice an ideal food to keep stomach upset at bay, the carbohydrates in the rice spur the body to produce tryptophan, the amino acid that causes sleepiness. But not all types of rice are created equal. A study published in the American Journal of Clinical Nutrition found that jasmine rice is more effective than other rice varieties (such as Mahatma rice) in helping a person drift off to dreamland. For even more food that can help you snooze, check out these 30 Best and Worst Foods To Eat for Sleep!

If you instantly reach for your mom's chicken soup recipe every time you feel the sniffles coming on, that's definitely a smart move. Not only can simmering up a pot give you the warm and fuzzies, it can actually make you feel better. A 2012 study published in The American Journal of Therapeutics found the compound carnosine, which is present in chicken, has the potential to fight the dreaded cold and flu viruses. If you don't have a go-to concoction, try our go-to chicken and rice soup recipe.

Generally speaking, hot tea has the power to soothe aching throats. But ginger tea specifically can soothe the muscle aches commonly associated with illnesses like flu and cold. How's it work? Ginger contains potent anti-inflammatory compounds called gingerols that work to ease that "everything hurts" feeling you can't seem to shake when you're sick. To make the warm drink, simply steep sliced ginger root in boiling water. If you're not a fan of tea, you can also purchase ginger juice "shots" or "gingerade." 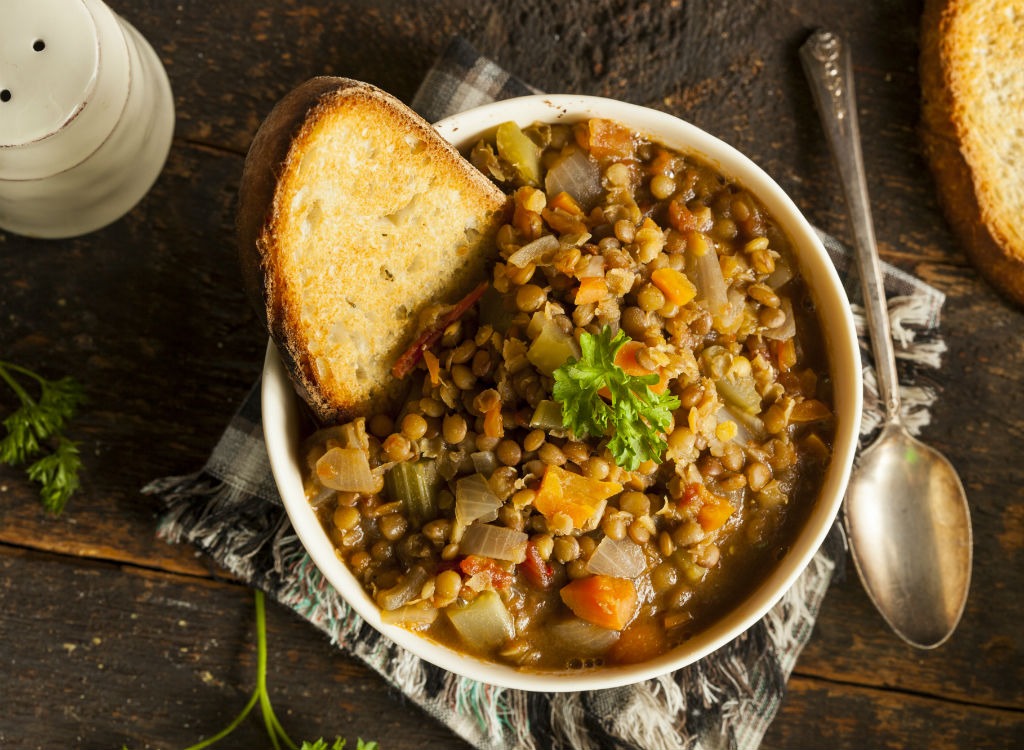 When you're sick, lifting a pencil or sending a text can seem like too much work. Thankfully, eating lentils can help fight off the feelings of fatigue. High in protein and iron, they offer long-lasting energy and even help to boost immunity so you can fight off bugs in the future.

While many people joke about how spicy food clears out their sinuses, hot chili peppers legitimately get the job done. And that's because they have what's known as a mucokinetic effect when consumed, meaning they make mucus thinner and reduce congestion. Chili peppers also contain a spicy compound called capsaicin that irritates mucous membranes and tear ducts, encouraging them to make more fluid, which in turn, helps to thin mucus. (Fun fact: The compound has also been shown to boost metabolism.) Other spicy foods that help ease sinus inflammation include curry, horseradish, and wasabi. Hello, sushi night!

Kefir to Calm Your Bowels

Diarrhea: Nobody likes to talk about it, but everybody's had it at one point or another. If one of your illness symptoms includes the uncomfortable stomach condition, the Cleveland Clinic suggests consuming kefir. The fermented milk drink contains probiotics that can help to promote healthy bacteria in the gut and kill off the bad bugs responsible for your upset stomach. While most dairy products are associated with irritating the stomach when you have diarrhea, kefir is one of the few that fall into the "helpful" category.

Pumpkin Seeds to Reduce the Duration of a Cold

Forget the vitamin C! When you have the sniffles zinc should be your BFF. While there's no cure for the common cold, consuming zinc can reduce its duration, according to the Mayo Clinic. Zinc can also help to prevent cold-causing viruses from further multiplying in your body, giving you an immunity boost. Pumpkin seeds are a great source of the essential mineral and also happen to be very tasty. Eat 'em plain, mix them with your other favorite nuts and seeds to make a trail mix, or add them to oatmeal or an a.m. quinoa bowl along with some cinnamon and pumpkin pie spice.

When you've got the stomach flu, replacing lost electrolytes like sodium, magnesium, and potassium is an important step in your recovery. While you can drink a sports drink to replenish these nutrients, coconut water is a natural alternative that's free of chemicals and in many cases, lower in sugar.

When you have a cold, the flu, or any other illness for that matter, the white blood cells in your immune system go on the defense—which can be a tough job. That said, you'll need to rebuild those immune cells so they're able to keep up the fight until you've fully recovered. How do you do that? By eating foods like carrots and sweet potatoes, which are packed with immunity-boosting nutrients like vitamins A and C. Nuke 'em and top 'em with olive oil and herbs or transform them into mashed potatoes for a nutrient-packed comfort food dish.

H20 to Ward off New Symptoms

No matter what ails you, don't forget the golden rule of overcoming an illness: drink plenty of fluids! Becoming dehydrated can slow your recovery and create a whole new list of problems ranging from weakness and confusion to heart palpitations and dizziness. If you don't like the taste of plain water, consider making a batch of flavorful detox water and sipping that instead.

And Avoid These Things… 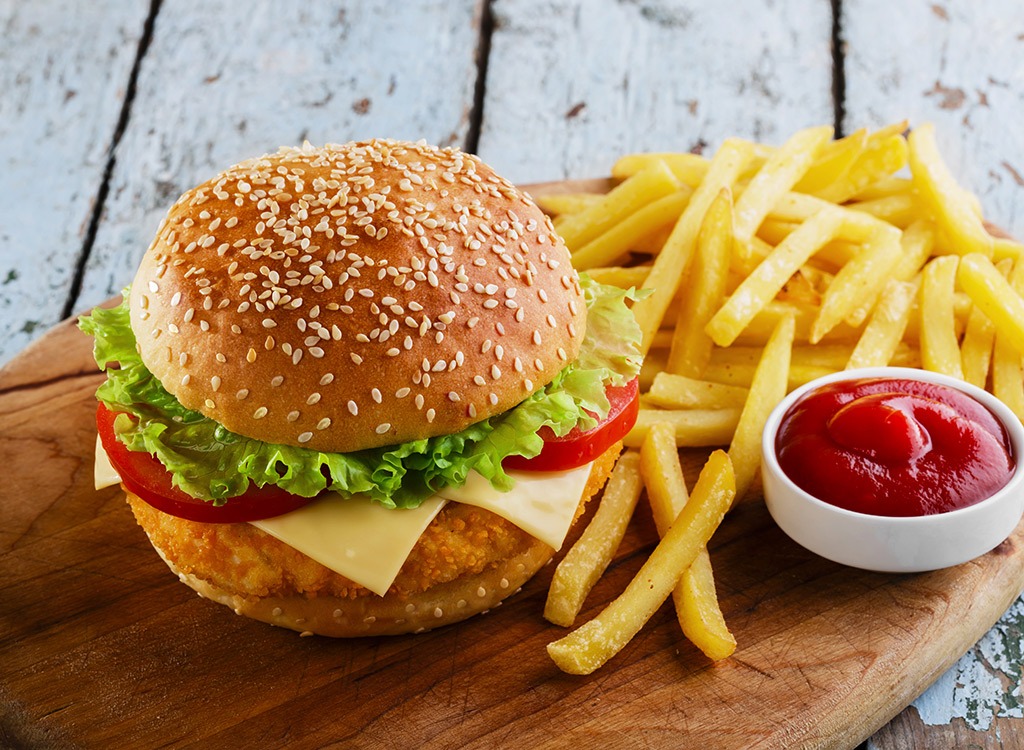 While you're eating to reduce your symptoms, remember that there are actually certain foods that can make you feel worse and zap your body of the energy it needs to heal itself. Things to avoid include alcohol, sugary fare like ice cream and cookies, and high-fat foods like burgers and fries.