The not-so-sweet side of the famous chocolate brand.

Hershey's, one of the most popular chocolate companies in the world, has been producing a whole array of sweets and treats for over a century. Founded in 1894, the iconic brand, which started in Pennsylvania, has created some of the most recognizable chocolates out there. Whether you are a fan of the brand's plain milk chocolate bars or prefer one of its more creative concoctions (Whatchamacallit, anyone?) Hershey's always delivers.

But of course, a company that has been around as long as Hershey's has will inevitably have some secrets it doesn't want the world to know. From its top-secret chocolate lab in Pennsylvania to its founder almost being a passenger on the Titanic, here are 9 surprising secrets about Hershey's.

"Hershey" and "Titanic" may be two words you would have never expected to hear in the same sentence, but, surprisingly, they have a deep connection. According to Hershey Archives, Hershey's founder, Milton Hershey, was supposed to be a passenger on the Titanic. However, Mr. Hershey canceled his ticket at the last minute and decided to return to the States from his European holiday a few days earlier on a different boat. 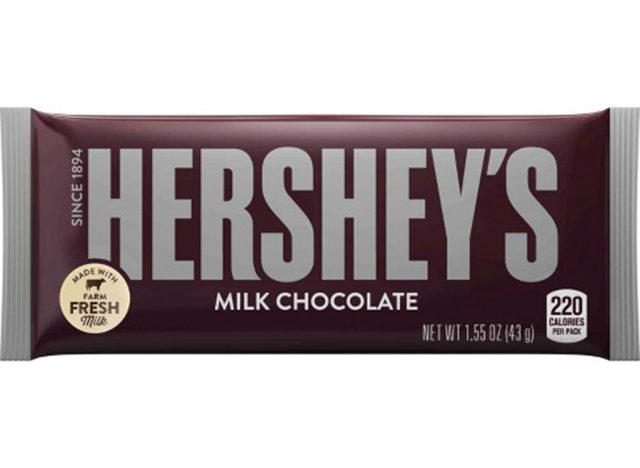 Milton Hershey's father was prone to attempt get-rich-quick schemes which resulted in the family being moved around a lot. Young Milton found himself in and out of different schools so much that by the 4th grade he was done, according to Mashable. He then embarked on several failed attempts of his own to create a viable business.

Hershey's may now be one of the most famous chocolate manufacturers in the world, but this wasn't always the case. As it turns out, Milton Hershey first started out by making caramel with his company known as the Lancaster Caramel Company. He didn't stick with just making caramel for long though—he soon realized that he instead wanted to focus on creating the "perfect" chocolate bar and decided to kickstart The Hershey Company.

In 1909, Hershey developed the Hershey Industrial School, now called the Milton Hershey School, which was a boarding school designed to help white male orphans. When his wife died, leaving Hershey childless, he set up a trust that would divert some of the company's profits to the school. It wasn't until the 1960s that females and people of color were accepted at the school. In addition, a book called The Hershey's Trust was written accusing the school of essentially indenturing the boys to live and work on Hershey's dairy farms. In addition, the book alleges that after the death of Hershey, the board members of the trust have misappropriated funds for their own gain.6254a4d1642c605c54bf1cab17d50f1e

They have a secret chocolate lab

Just a few miles down the road from the famous Hersheypark is Hershey's confidential product development lab. Housed in a nondescript building and closed off to outside visitors, this special place is where the chocolate company thinks up and tests its famous treats before sharing them with the rest of the world. It's all science and sweets here!

RELATED: The Best Chocolate in Every State

Hershey Kisses are not that original

Just the word "Hershey" may conjure up images of chocolate Hershey Kisses, but did you know that Hershey was not the first company to come up with this sweet design? In actuality, Wilbur Chocolate, a fellow Pennsylvania-based chocolate company, came up with this candy, called "Wilbur's Buds," over a decade earlier than Hershey's. Once Hershey's updated their plant to create the individually foil-wrapped treats they began outselling the original.

Hershey's may taste gross to some people because of this one, strange ingredient

Some people may not be a huge fan of Hershey's—and there's a scientific reason behind this. According to reports, Hershey's chocolate may have butyric acid found in it. This fatty acid can also be found in parmesan cheese, butter, yogurt, and (brace yourself) vomit.

Hersheypark may be haunted

If you're interested in all things paranormal then you may want to head over to Hersheypark, Hershey's very own chocolate-themed amusement park located in Pennsylvania. According to reports, this family attraction, which opened in 1906, has had its fair share of hauntings over the years.

Hershey's once made a tasteless chocolate bar suited for war

Through the decades, Hershey's has made different kinds of chocolates for all different occasions—including for soldiers in World War II. In 1937, Army Captain Paul Logan asked Hershey's if the company could make a tasteless, pocket-sized chocolate bar that was both calorie and nutrient-dense, and could also withstand high heat. Captain Logan wanted something that could sustain his soldiers if they found themselves in harm's way with no food. The result was the "D ration bar," which soldiers in war ate during emergency situations.