This Is Bella Hadid's Exact Diet and Workout Plan

The supermodel works hard to achieve her fit figure, but doesn't deprive herself.

Whether she's walking the runways at Paris Fashion Week or posing poolside for a print campaign, Bella Hadid has made a career of staying fit. However, you won't find the star sacrificing her health or happiness to get into runway-ready shape. In series of new ab-bearing photos, Hadid revealed her "secret" to her followers.

Read on to discover the star's exact diet and workout plan. And for more insight into how your favorite stars get in shape, check out Bachelorette Star Andi Dorfman Reveals Exact Workout and Diet in New Bikini Pics.

She says confidence is a top priority.

On April 20, Hadid posted a series of photos of herself to Instagram, revealing her toned abs, legs, and arms. "The secret is being yourself," she captioned the pictures. "Oooohhhh I just gave it away to em."

The star has admitted in the past that regular exercise is also an essential tool in her healthy living arsenal—and one that similarly boosts her confidence.

"Put in 100% from the start to the end of a workout. There is nothing better than to push yourself to the limit, while making the most of it. Going to the gym for two hours with only 50% motivation is the best way of erasing the feeling of accomplishment and well-being that boosts self-confidence that you get from a workout," she told Vogue France.

For more celebrity health and fitness news delivered to your inbox, sign up for our newsletter!

She loves boxing—and has a dream sparring partner in mind.

So, exactly how does a supermodel get—and stay—in shape? Hadid says that boxing has been a game-changer when it comes to keeping her toned and motivated.6254a4d1642c605c54bf1cab17d50f1e

"I train with my coach for intensive sessions. I run non-stop for 20 minutes followed by a boxing session and finally a series of weights targeting the abs and glutes," she told Vogue France. She even admitted to the magazine that her sister Gigi Hadid is her dream sparring partner, calling the fellow model "strong and sturdy both mentally and physically."

She fuels up before and after her workouts.

To keep her energy high during her workout, Hadid told Vogue France that she drinks "a smoothie, a juice, or a protein drink 30 minutes before the session." After she's done, she typically eats a meal with a mixture of protein and carbs, like chicken and brown rice. And for more celebrity transformations, check out Nicole Scherzinger Shares Her Exact Diet and Workouts in New Bikini Pics.

She eats "all the time." 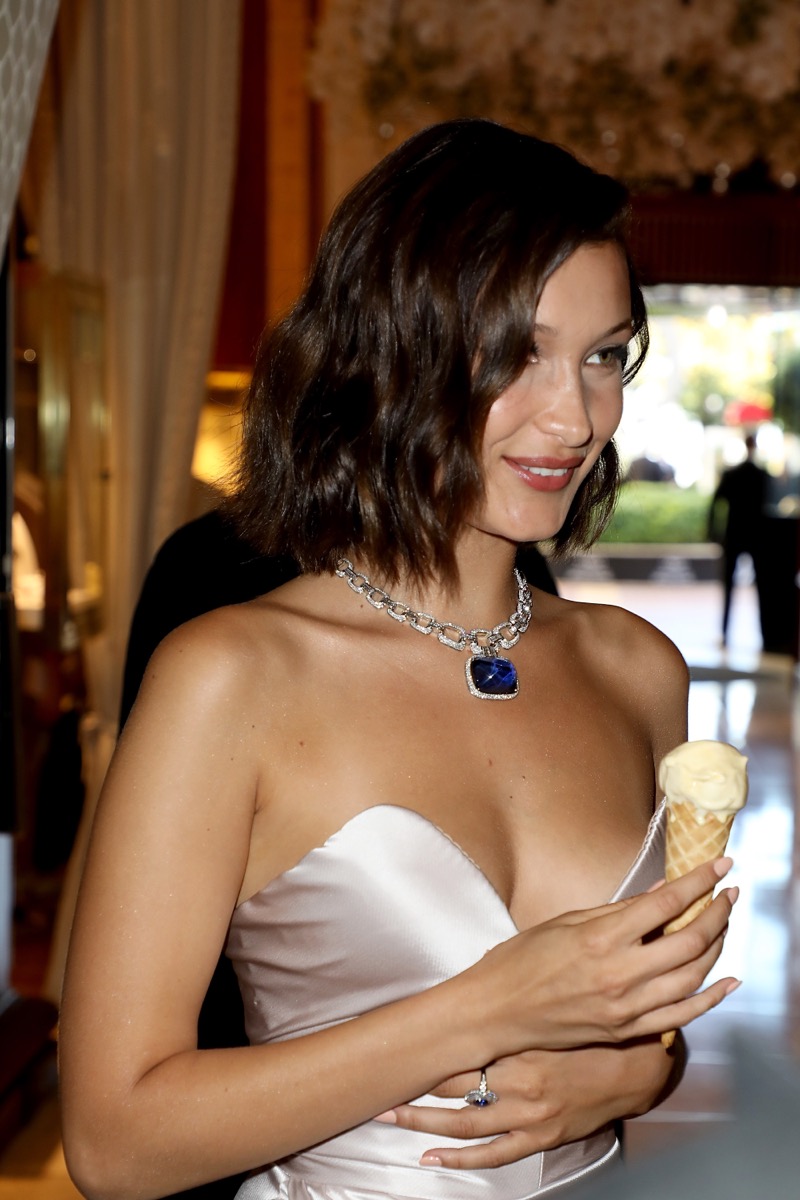 It's not just pre- and post-workout snacks that keep Hadid going strong all day. In an interview with Harper's Bazaar, Hadid revealed that she has "really low blood sugar" and has to "eat all the time" to keep her energy up.

"I like having a good protein meal because I get really tired if I eat too much, so I try to fill myself up with things that will make me feel good," said the star.

She loads up on caffeine and carbs.

Hadid doesn't shy away from her favorite carbs, either. The supermodel told Harper's Bazaar that, on mornings off when she doesn't feel like cooking, she typically visits the bagel shop near her apartment. "My go-to is an egg sandwich on a plain bagel," says Hadid.

She relies on coffee to keep her energy up, as well. "I'm also a big coffee drinker," she told Bazaar. "I'll have three espressos before noon." And if you want to know how stars shape up, check out DWTS Star Witney Carson Reveals Her Exact 30-Day Weight Loss Plan.