The Best Cities in America for Runners, According to New Data

The top 5 locations rated the best for air quality, water quality, traffic congestion, and other factors.

They say you should never run away from your problems. Ironically, though, a regular jogging habit can end up solving many health problems before they even have time to appear. Research published in the British Journal of Sports Medicine even concludes that literally any amount of running is linked to a lower risk of passing away from any cause! That's right, while more is almost assuredly better, researchers report you don't even have to run very hard or for all that long to benefit your body in a multitude of ways.

Besides the well-documented cardiovascular and fat-burning benefits linked to running, did you know that a solid jog can also do a world of good for your brain? This study, released in the scientific journal Neurobiology of Learning and Memory, tells us that running actually offsets the effects of chronic stress on the brain, preserving and protecting memory processes. All the more reason to put on your favorite playlist and hit the pavement the next time you're feeling particularly anxious.

No two runs are exactly the same, however, and the outside environments we expose ourselves to while out jogging are a major component in determining long-term health outcomes. For instance, while out for a run, our lungs breathe in much more air. Well, if you're out exercising in an area with a lot of air pollution, deeply inhaling tiny harmful particles of dust and soot isn't going to do your body any favors. Chronic smog exposure is linked to a long list of health issues.

It isn't just air pollution; a number of important factors help determine just how suitable a city is for running. What's the average temperature? How about the local water quality? Will you be able to enjoy your run without encounterings tons of traffic and congestion at every turn? Luckily, Puma Europe has put together a list of the best cities in America for runners according to six distinct categories: air quality, water quality, traffic congestion, elevation, temperature, and a number of local running clubs.

On the opposite end of the spectrum, the data indicates that Miami is the worst U.S. city for running, mostly due to high levels of congestion and year-round hot temperatures. Following close behind is Fresno, California with poor showings across all six categories. New York City, Los Angeles, and Dallas round out the bottom five. Dubiously, NYC boasts the worst air quality among all considered cities by a considerable margin.

As far as the best cities for running, the top pick may surprise you. Read on to see the top 5. And next, don't miss The Best Tips for Running for Weight Loss.

If you enjoy a jog in a cooler environment, the Mile High City may just be your running home away from home. Capping off the top five, Denver boasts clean air, a high quality of local water, and a fairly reasonable average temperature (50 degrees F). Traffic congestion and elevation levels could be better, but overall the data indicates Denver is still a solid cardio city. 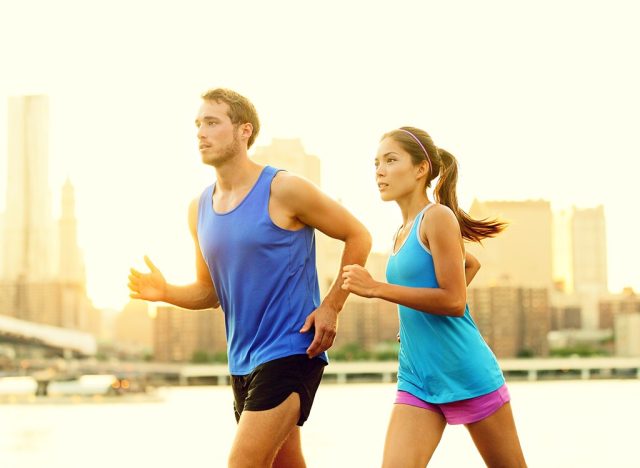 Run to Milwaukee for the low elevation, stay for the minimal traffic congestion. Known for its breweries and baseball, the largest city in Wisconsin also offers runners clean water, lots of running clubs, and brisk jogging temperatures.

The third best U.S. city for jogging may not be as well known as Denver or Milwaukee, but Tulsa is a runner's paradise offering virtually the best of all relevant categories. Clean air? Check. Barely any traffic congestion? Check. Even better, with a very attractive average temperature of 61 degrees F, Tusla is perfect for those who prefer a mild climate.

Coming in at number two is Colorado Springs, Colorado. While the local average temperature is notably a bit chillier (46 degrees F), Colorado Springs' crisp clean air and water, relatively low elevation, and copious local running clubs amply explain why this city is a destination for runners the world over.

Related: This Workout Plan Will Keep You Lean Throughout the Holidays

Many call it the City of Roses, but perhaps that should soon change to the City of Running. Portland is a beautiful town that, besides perhaps a bit too much traffic congestion in some areas, offers an ideal running environment for cardio enthusiasts young and old. There are far, far more local running clubs around Portland than any other analyzed city, for example. Meanwhile, very low elevation and a temperate average climate (54 degrees F) make for great exercising conditions.

And there you have it, the best cities in America for running! For more, check out 10 Ways to Burn More Calories During Every Walk, Trainers Say.