This Beloved Cereal Still Isn't Being Recalled Despite 500+ Illnesses

Nausea, diarrhea, and vomiting are among the symptoms reported

The unlucky streak continues as hundreds more claim they've gotten sick after digging into a bowl of Lucky Charms cereal. For over a month now people have been reporting the "magically delicious" cereal has caused them to have gastrointestinal issues, including nausea, diarrhea, vomiting, and other symptoms.

In early April, about 140 reports started piling up and by mid-month, over 200 people claimed to have gotten sick. As of April 28, the U.S. Food and Drug Administration (FDA) indicated they had 446 cases of illness linked to the iconic breakfast food. Now, that number is up to 500 complaints but a recall that would pull it from shelves and potentially prevent others from getting sick has not been issued.

An FDA representative told Eat This, Not That! in an email on April 28 that it has received "complaints regarding illnesses associated with Lucky Charms cereal and is currently investigating these complaints." In response to the most recent report numbers, however, the FDA says it "didn't have additional details or updates to provide at the time." 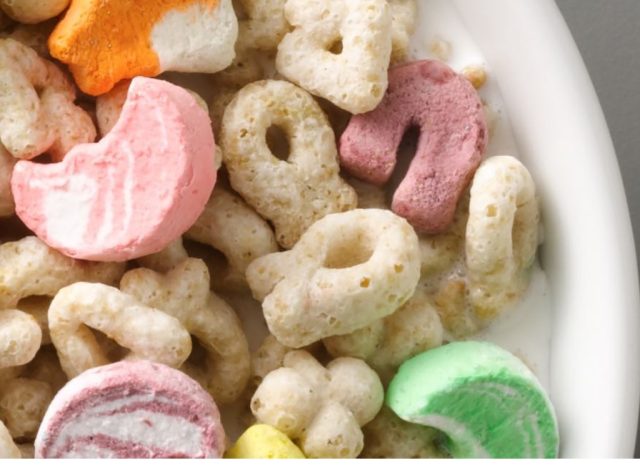 As of May 5, over 500 customer complaints have been issued through the FDA's CFSAN Adverse Event Reporting System. Others posted on iwaspoisoned.com, where thousands of people have told their stories of illness related to the product.6254a4d1642c605c54bf1cab17d50f1e

"My 5 yo daughter has symptoms of food poisoning," one commenter said on the website on May 5. "She eats Lucky Charms a couple of mornings each week and is the only one in our family that does so. This is the second time in two weeks that she has been sick… and we just now made the connection back to the cereal."

Related: These Are Costco's Most Popular Items Right Now

As for why the cereal hasn't been recalled yet, there is some speculation, although the FDA has declined to give a firm response. To date, General Mills—the brand behind Lucky Charms—has said it's aware of the reports but has not found any evidence of illness linked to the cereal after an internal investigation.

In a reply to a complaint on Twitter on April 20, the company said, "We're so sorry to hear about this and we hope you're both ok now. There are no active recalls on this product. We strongly believe it is our responsibility to investigate any concerns and have done so across our Lucky Charms manufacturing facilities."

According to Toby Amidor, MS, RD, CDN, FAND, award-winning nutrition expert and Wall Street Journal best-selling author of Diabetes Create Your Plate Meal Prep Cookbook, and a member of the Eat This, Not That! Medical Expert Board, because there hasn't been hard data yet to link the illness with the cereal, an official notice won't be published.

"As such, a recall cannot be made until that happens," Amidor says.

Until then, Amidor urges customers to avoid the cereal. "As of now, I would recommend holding off on purchasing Lucky Charms cereal. If you do find that you have GI symptoms after consuming the cereal, go to your doctor and report it," she says, adding that you should, "Keep the box as samples [which] can also help determine the issue."

Whether you have a bag of this cereal in your kitchen or not, this room can be a breeding ground for bacteria. Here Amidor shares her two-step method for cleaning and sanitizing surfaces in order to help prevent foodborne illnesses.

Be sure to check out: This National Grocery Chain Is Closing Stores.

Amber Lake
Amber Lake is a staff writer at Eat This, Not That! and has a degree in journalism from UNF in Jacksonville, Florida. Read more
Filed Under
Groceries // Grocery Shopping // Grocery Stores // News