There's a National Shortage of This Coffee Essential

Searching from store to store for this basic condiment has quickly become the norm for many coffee lovers.

Rumors of a shortage probably don't capture your interest unless it directly affects one of your favorite foods or drinks. Well, this week—among the 80% of people who regularly drink coffee—many grocery shoppers have been finding a recent shortage hitting close to home when they've gone to stock up on a basic accompaniment to their brew. If you're headed to the grocery store, here's the coffee staple that you might have to hunt hard for.

Last week, a reader in one of the Mid-Atlantic states reached out to Eat This, Not That! to share that they'd run into a half & half shortage at one location of a regional supermarket chain.

When they inquired with store staff, one employee mentioned there is a growing shortage of half & half and suggested they search at the local big-box store. There, the shopper found the refrigerated shelves in the dairy section mostly bare, except for a single carton of the store's private label half & half that was available. 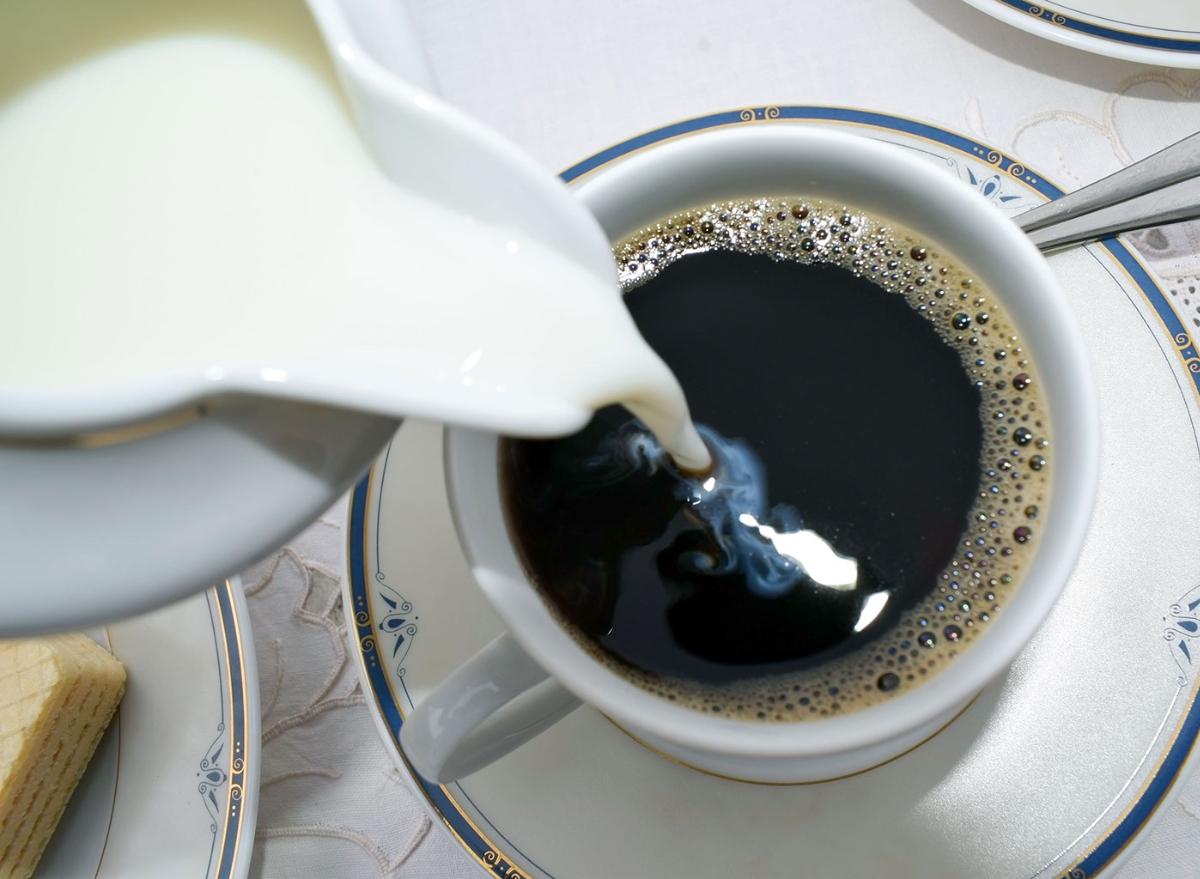 This shortage on half & half seems to confirm recent word of a national dairy shortage, as mentioned in the Pennsylvania Lehigh Valley's Morning Call. "It's a labor shortage issue," Dennis Curtin, director of public relations for Weis Markets, told the outlet. He added that some processors are having trouble staffing their plants, and this creates something of a bottleneck in dairy production.

What might this mean for your morning mug? If you have time to search from store to store, that could be your best bet. Otherwise, according to Curtin, you might have to adapt your tastes slightly for a little while.

He said when issues like this occur, "producers tighten up what they produce. For example, if a company that produces six varieties of one specific product, perhaps in different sizes—they may temporarily focus on the three best-selling products and hold off on producing the three that do not sell as well."

The most important thing to do in the meantime is not to go overboard when you do get your hands on that coveted half & half, according to Alex Baloga, president and CEO of the Pennsylvania Food Merchants Association. "If people continue with their normal buying habits and don't panic, the issue will resolve itself," he said.

Sign up for the Eat This, Not That! newsletter for breaking grocery news you need, delivered daily.

Krissy Gasbarre
Krissy is a senior news editor at <em>Eat This, Not That!</em>, managing morning and weekend news related to nutrition, wellness, restaurants and groceries (with a focus on beverages), and more. Read more
Filed Under
Coffee // Dairy // Groceries // Grocery Shopping // News