One Thing Runners Do That Secretly Leads to Injury, Says Study

If you love running, don't make this common mechanical mistake that leads to pain.

We've known for years that running for exercise can all too often lead to nagging and painful injuries that can have you hanging up your shoes for a while. In fact, according to some statistics, upwards of 73 percent of women and 62 percent of men who run regularly will sustain some form of injury. The knee is the biggest problem area, followed by the Achilles tendon, plantar fasciitis, and stress fractures. Marathoners may suffer from hamstring and calf issues, while female runners are prone to hip problems.

Furthermore, new scientific research is shedding light on just how fragile we are when it comes to running for exercise. According to a new study published in journal Frontiers in Sports and Active Living, runners who change up their routines too quickly or too often—all of sudden running longer or faster, switching up the terrain too quickly, joining a running group when they're used to running solo, changing their type of shoes, and, worst of all, making multiple of those major changes at once—will increase the risk of injury.

Now, an all-new study published in the journal Human Movement Science has found that there's one major form mistake you could be making while you go running that can really cause your body damage over time. Read on for what it is, and how to avoid it. And if you prefer to walk for exercise, make sure you're aware of The Secret Cult Walking Shoe That Doctors and Nurses Are Obsessed With. 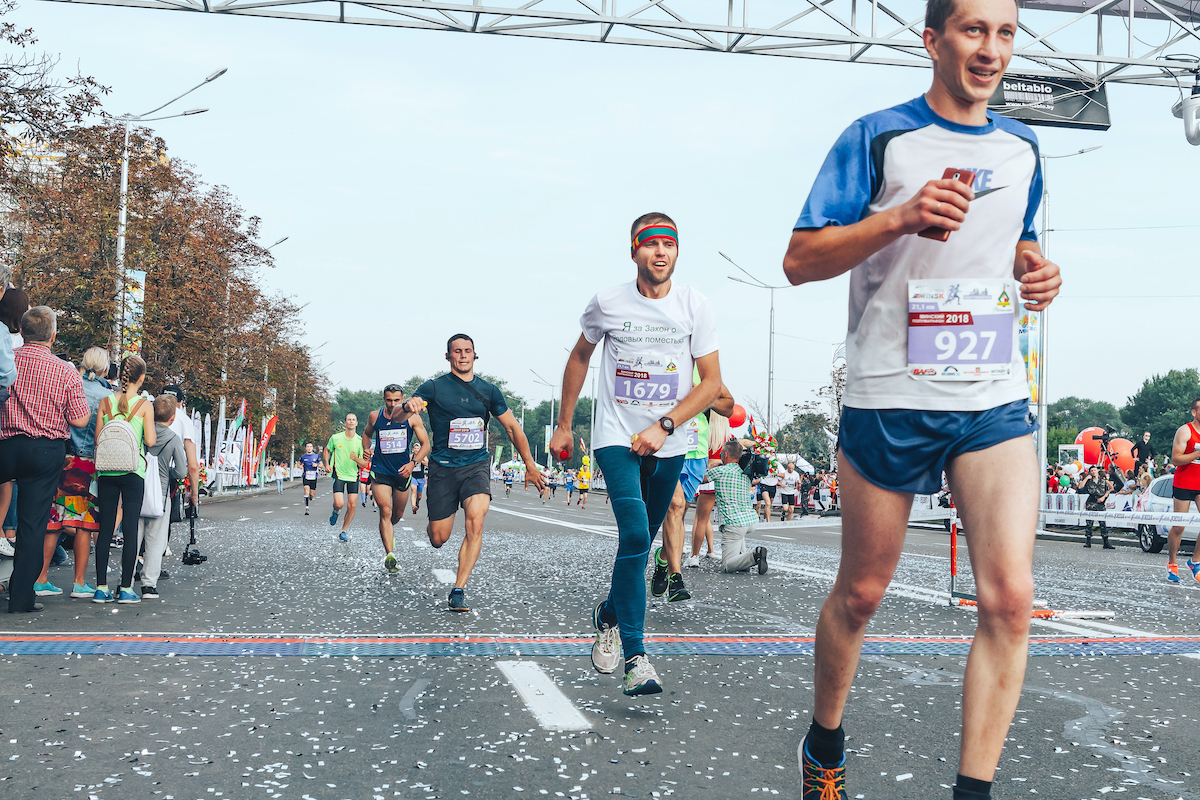 The study was conducted by researchers at the University of Colorado Denver. It was borne out of a single observation. "This was a pet peeve turned into a study," Anna Warrener, PhD, lead author and assistant professor of anthropology at CU Denver, explained in the study's official release.

Warrener had performed a fellowship with Harvard's Daniel Liberman, PhD, who is an avid runner himself. "When [Lieberman] was out preparing for his marathons, he noticed other people leaning too far forward as they ran, which had so many implications for their lower limbs. Our study was built to find out what they were," she noted. And for more on running, don't miss the Surprising Side Effects of Running Every Day, According to Science.

With the help of 23 "injury-free, recreational runners between the ages of 18 and 23," the research team asked the runners to run at varying degrees of trunk flexion—otherwise known as how far you lean forward while you go. The researchers noted how the changes in trunk flexion altered both how their legs adapted and how their ground reaction forces (GRF)—the force of the ground up on the body—changed during their exercise. And if you love to run, don't miss the One Running Trick That Makes Running So Much Easier, Says Science. 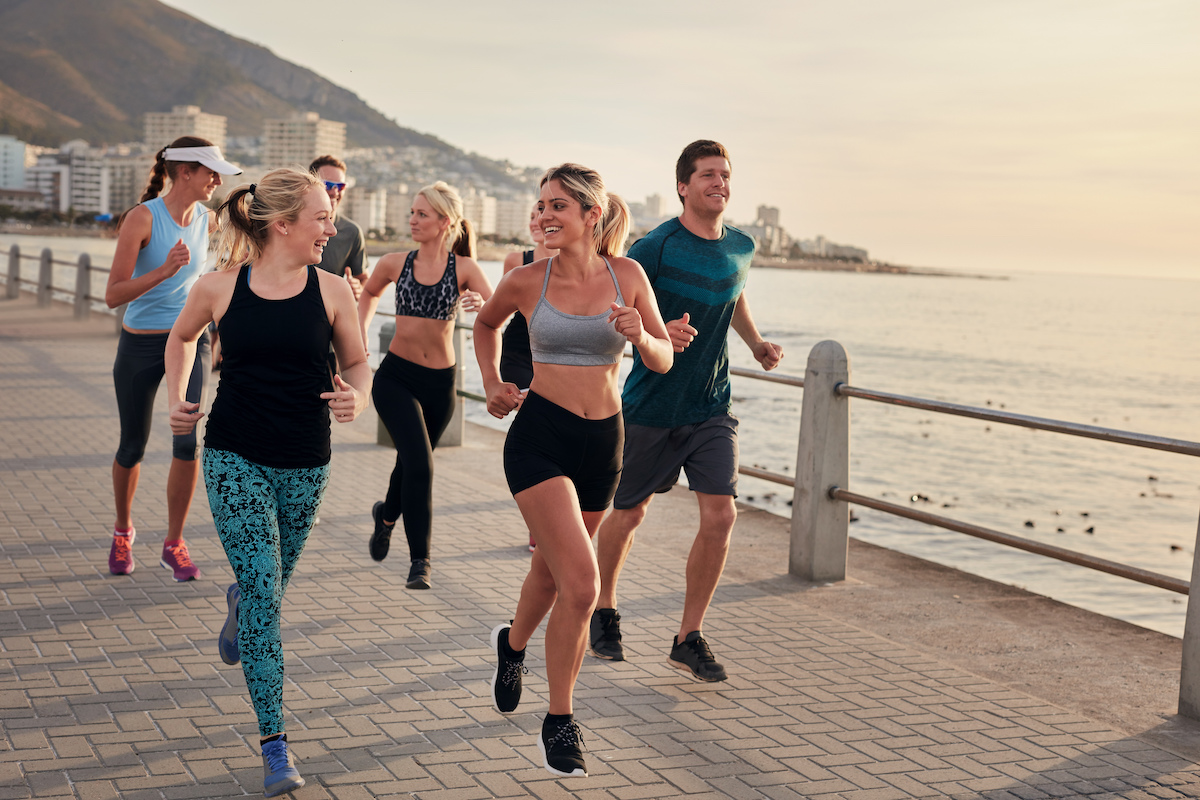 As the runners increasingly bent forward more, their average stride length decreased by 13 centimeters, and they took more strides per minute—going from roughly 86 strides in 60 seconds to roughly 93. The scientists hadn't expected this.

"The relationship between strike frequency and stride length surprised us," said Warrener. "We thought that the more you lean forward, your leg would need to extend further to keep your body mass from falling outside the support area. As a result, overstride and stride frequency would go up. The inverse was true. Stride length got shorter and stride rate increased."

Also, when compared to runners who were running with a "natural trunk flexion," those who were leaning forward had a more bend and flex in both the knees and the hips. They also experienced more ground force reaction. All of this to say: Leaning forward causes you to hit the ground harder every stride, you'll be taking a lot more strides, and your body will be far more inefficient and prone to injury.

"The big picture takeaway is that running is not all about what is happening from the trunk down—it's a whole-body experience," Warrener explained in the release. "Researchers should think about the downstream effects of trunk flexion when studying running biomechanics."

Top running coaches will tell you that running properly is learned—it's not something you're actually born with. One of those coaches is Nicholas Romanov, Ph.D., perhaps best known for his work with the Russian Olympic team, who is widely regarded as one of the greatest minds in distance running. In fact, he's developed a way of running known as "the Pose Method," which many of the top runners in the world swear by. Here's a brief explanation of how it works, courtesy of Men's Journal:

"To land on the efficient side of the spectrum, Romanov advises maintaining perfect posture that keeps the shoulders, hips, and ankles in alignment. Runners should then free-fall forward by moving their hips over the balls of their feet. The knees should always be bent, and the body weight should always be on the balls of the feet, which ideally are pointed straight forward. As soon as you fall, you pick up your support leg. Don't fixate on landing, he says. Instead, focus your mind on pulling up your support leg."

And for more on running, check out How Far You Need to Run to See Visible Changes to Your Body, Says Olympian Runner.

William Mayle
William Mayle is a UK-based writer who specializes in science, health, fitness, and other lifestyle topics. Read more about William
Filed Under
Cardio // News