Take a peek behind the curtain at a franchise in turmoil.

When it comes to company secrets, those unflattering angles that a brand would rather keep hidden, there's no other company that seems to have quite as much to hide as America's largest sandwich chain.

One thing that isn't a secret? Subway's public image has been crumbling before our eyes. Last year saw one controversy after another aired publicly by the chain's insiders. The revelations about Subway seem to show foundational issues with the way the brand operates—something its management doesn't seem to be interested in fixing in a real way.

Subway has had plenty of issues marring its reputation in the past. From Jared Fogle to its iconic footlong sandwich measuring only 11 inches, the chain has faced some serious public backlash (and more than its fair share of lawsuits.) But it could be that its biggest troubles are self-generated—from its exploitative business model to the allegedly sub-par product it sells to millions of customers.

Here are some of the biggest secrets at Subway.

Subway has a strained relationship with its own restaurants

Subway's exploitative treatment of its own operators has been a frequent allegation wagered against the chain. Many owners of Subway restaurants have publicly called the chain out for ignoring their operational issues and providing little support for their struggles.

According to them, attempts at communicating with the chain's CEO John Chidsey go completely unreciprocated, while the company forces them into draconian franchise agreements, money-losing menu decisions, and imposes unfair fees and monetary penalties while their margins are already thin.

The company has allowed rampant oppression and corruption

Unlike many other major fast-food chains like McDonald's and Burger King, the majority of Subway's locations aren't run by restaurant groups or investment firms, but by small entrepreneurs who often make it a family business. But Subway's management has allegedly used oppressive and corrupt tactics on the path to growth, putting many of these vulnerable operators out of business along the way.

A recent lawsuit brought against the chain outlined systemic exploitation of franchise owners, many of whom are immigrants and recruited without the basic knowledge of math and English. They are then easy prey for Subway's Business Development Agents (BDAs), regional managers who have the ability to shut a restaurant down for the smallest violations and, being restaurant owners themselves, eventually take it over.

According to a 2019 article by The New York Times, the regional managers have been known to purposefully target and shut down Subway restaurants with overly harsh inspections so they could assume ownership "at a throwaway price."

Its founder is shrouded in controversy

Insiders have said that the chain began its downward spiral after founder Fred DeLuca passed away, which left Subway without his tight-grip leadership for the first time since it was founded. And while things were allegedly better for restaurant operators when DeLuca was alive, he has been painted as a controlling, overly frugal autocrat who had set up the business so that no one else but him could run it.

According to Business Insider, he was also known for his womanizing tendencies, allegedly seducing the wives of his franchisees and even posing for a semi-nude calendar that was distributed to Subway's employees.

Subway is losing thousands of locations

Based on the number of restaurants it has, Subway has held the title of the largest fast-food empire in the world for some time. But according to most recent data, both Starbucks and McDonald's could soon have a bigger global footprint than the sandwich chain.6254a4d1642c605c54bf1cab17d50f1e

Subway has been shutting down restaurants en masse. In 2020, it allegedly closed more restaurants than any other chain ever in the history of the business (although the exact number of closures, which some say was over 2,000, is disputed by the chain.) Then last year, it lost hundreds more locations, which brought the 40,000-plus store count down even further.

And the restaurants could keep closing in large numbers—according to an insider, many operators are looking to unburden themselves of ownership for "dirt cheap."

"It wouldn't surprise me if another 25% of stores are gone in the next three years since the franchisees whose lease is coming up for renewal are not favorably eyeing this business," said one West Coast franchisee who owns multiple locations.

The freshness of ingredients has been called into question 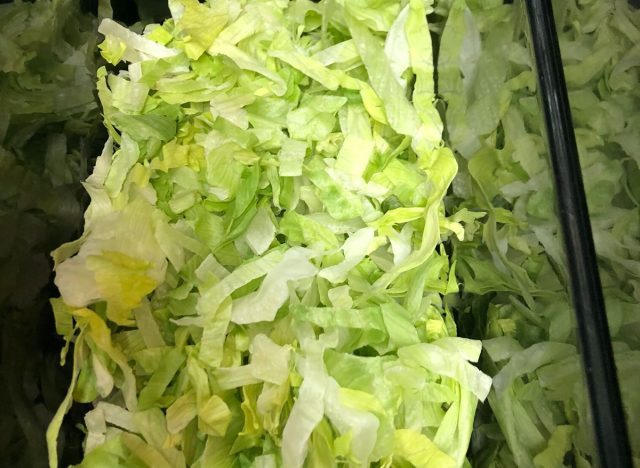 An insider revealed to Eat This last year that all the "fresh" ingredients arrive at individual restaurants pre-cut, pre-processed, and laden with preservatives (and that includes veggies, too.) For example, by the time that lettuce ends up on your Subway sandwich, it may be up to 22 days old.

"People don't even know how many chemicals they're consuming when they're eating at Subway—it's anything but fresh, healthy food," our source said.

The chain's tuna is mystery meat

The contents of Subway's tuna may have been the biggest fast-food story of 2021. It all started with a lawsuit that claimed the chain is defrauding customers by misrepresenting its tuna as actual tuna when in reality it is "a mixture of various concoctions that do not constitute tuna." In fact, the claims went further, stating that a lab test "found that the ingredients were not tuna and not fish."

A subsequent investigation by The New York Times confirmed the claim that, try as you might, you can't actually find any traces of tuna in Subway's tuna. However, deception by Subway was only one possible scenario. Another plausible explanation was that Subway's tuna is simply too processed to turn up any DNA in lab tests. According to an expert Eat This interviewed on the topic, what might be likely is that Subway is using cheap fish leftovers from fish processing facilities, which can include several fish species.

But then the story got even more bizarre: the latest iteration of that original lawsuit made claims that not only is the tuna not tuna, but that it contains chicken, pork, and cattle proteins.

And its bread isn't even bread

While the evaluation of the chain's bread by the Supreme Court of Ireland happened purely for tax purposes, the ruling still stands: Subway's bread does not meet the legal definition of bread in that country because it is too high in sugar.

Menu refresh was a sloppy smoke and mirrors job

Subway's Eat Fresh Refresh, also known as its largest menu overhaul in brand history, may have caused a major uptick in the chain's sales for a few months, but insiders have characterized the "new and improved" ingredients and menu items as having undergone only superficial, cosmetic changes.

"Our turkey may be sliced more thinly now," a source told us, "but it's the exact same turkey we were using before."

It seemed that Subway came up with the idea of the Refresh as a major marketing move, and then scrambled to reverse-engineer the changes that should have been at the heart of it.

The chain had a hard time giving away free sandwiches

In order to promote the Eat Fresh Refresh, Subway promised to give away a million free sandwiches. But according to an insider who spoke to us in July of 2021, many of those sandwiches went unclaimed, demonstrating that even the promise of free food wasn't enough to garner initial excitement around Subway's new products.

It also didn't help that a New York Post writer stated the new sandwiches tasted "as vile as the old ones."