8 Worst Fast-Food Burgers to Stay Away From Right Now

These are currently the biggest offenders when it comes to calorie, fat, and sodium content.

Looking to clean up your diet in 2022? You might agree that there are few temptations more difficult to avoid on your path to healthy eating than a juicy fast-food burger. And with the seemingly endless options now offered by the fast-food industry, as well as our growing proclivity for ordering food online, it has become easier than ever to be seduced by this staple of the American diet.

While we would never tell you to give up burgers completely, we do want to point out that there's a difference between indulging and overindulging. Indulging looks different for each individual—what may be a no-no for you is a more permissible dietary faux pas for someone else—but overindulging looks very much the same, especially when it comes to fast-food burgers. It's the burgers that end up serving you too much of everything: the doubles and the triples loaded with multiple slices of bacon and cheese, with calorie counts over 1,000, and exorbitant amounts of sodium and fat.

"While a hamburger can fit into a healthy diet, many fast-food chains have taken the concept of "burger" over the edge by increasing the portions sizes and piling on high-calorie additions like bacon and creamy sauces," says Amy Goodson, a registered dietitian and certified specialist in sports dietetics.

In order to help you maintain your healthy eating goals, Goodson identified these worst offenders on major national chain menus. Here are the unhealthiest fast-food burgers you should stay away from, listed from bad to absolute worst. And capping off the list, you'll find her recommendations on how to build a healthier burger at home.

For more, check out The 8 Best Healthy Fast-Food Items In 2022: Eat This, Not That! Food Awards. 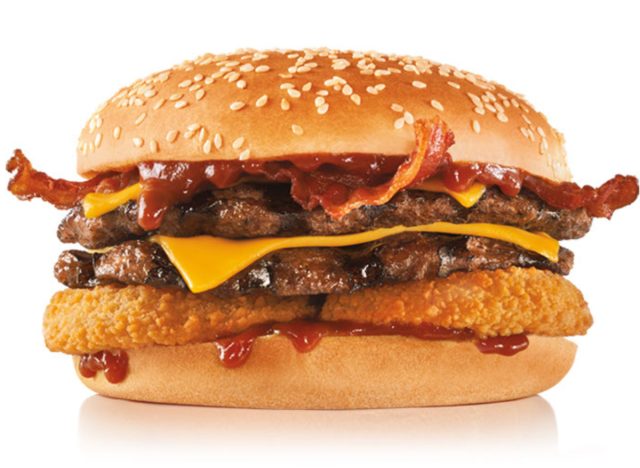 A staple of the Carl's Jr. menu, this is one of the heaviest burgers available at the popular chain—and across the nation. While the sometimes-available iterations like the Spicy Double Western Bacon Cheeseburger and the Triple Western Bacon Cheeseburger pack an even bigger calorie punch, even this base version is bad enough to never be worth ordering.

"Two beef patties, two slices of bacon, two slices of cheese, and crispy onion rings bring this burger to 1,020 calories," says Goodson. In particular, she points to the bacon, onion rings, and BBQ sauce as the culprits for the exorbitant sodium content of 2,020 milligrams—which will get you close to the FDA-recommended 2,300 mg daily limit in just one item.

"If you look at the description of this burger, words like "a pair" or "two" are listed for every ingredient—that's a bad sign," says Goodson of this Five Guys item. "With two beef patties, two slices of bacon, and two slices of cheese, this burger has "two" much of everything!"

Not to mention, this nutrition info is written out for the most basic version of the Bacon Cheeseburger before the toppings. Start layering it with things like mayo, ketchup, BBQ sauce, or more cheese, and you're looking at an additional caloric load on top of the already-high 1,060 calories. And, you're planning to have fries with that, right? Add another 300 to 600 calories, depending on the size of your side.

Some burger chains might have you believe you need a laundry list of layers and toppings within the bun for a truly deluxe burger experience—don't fall for it. While we love Culver's Bacon Deluxe's additions like tomatoes, pickles, red onion, and lettuce, we aren't so crazy about the three beef patties and other things that take the saturated fat content to a whopping 30 grams (medical experts recommend no more than 16 to 22 grams per day for an average diet of 2,000 calories.)

"Burger swag like mayonnaise and a buttered bun add to the overall calories and fat of a burger," says Goodson. "Remember, 'deluxe' might mean deluxe in taste, but typically also means deluxe in calories!"

"The key words that imply added calories in this burger are double, bacon, and mayo," says Goodson. "It's a signal to stay away from this option just by reading its name."

And the nutrition panel confirms our face-value judgment of Sonic's SuperSonic Bacon Double. At 1,140 calories, 77 grams of fat, and 2,020 milligrams of sodium, this double cheeseburger clocks in as a worse option than some triples.

"A good rule of thumb when choosing burgers is to skip anything that says "Really Big" in the name," says Goodson. "With three patties, cheese, and a high-calorie creamy sauce, this burger packs in way too many calories for one meal."

Just looking at the image of this Wendy's burger will tip you off about its indulgence. Yes, those are three burger patties (almost a pound of red meat), three slices of cheese, a bunch of bacon and crispy onion rings, and gooey bourbon bacon sauce that looks a lot like maple syrup—all the components that Goodson labels as "high calorie-offenders."

And while this cornucopia of salty, sweet, and crunchy makes for an explosion of pleasure on your taste buds, the rest of your body will fare slightly worse. Just look at the sodium and saturated fat content.

"At 1,300 calories, 36 grams of saturated fat, and 1,830 milligrams of sodium, the Triple Whopper with cheese is a serious calorie monster that provides more saturated fat than you need in a day based on a 2,000 calorie diet," says Goodson. "The problem here? The portion size!"

At the top of our Worst Burgers list sits another Wendy's culinary gem: the Big Bacon Cheddar. Listen, this burger, just like most others, is a perfectly reasonable indulgence in a single-patty form (which has 810 calories.) But turn it into a triple and you're consuming almost a pound of beef, three times the cheese.

Other not-so-great elements of this item? The addition of creamy cheese and bacon jam, fried onion rings, bacon, and a cheesy bun.

"Adding both bacon jam and bacon to a large burger tacks on more calories and fat," says Goodson. "Not to mention, the serving size is way too big and provides more sodium than the average healthy American is supposed to have in a day."

How to Build a Better Burger

A burger doesn't have to set you back with a whole day's worth of calories or more, according to Goodson. It can actually be made much healthier with a few simple tweaks at home.

For example, choose a lean cut of beef for your patties—ideally 90% lean with 10% fat, she advises.

"It's important to note that lean ground beef is a nutrient-rich source of high-quality protein providing you with ten essential nutrients," says Goodson.

Also, watch the serving size: 4 to 6 ounces of lean beef is more than enough for a delicious burger.

When it comes to all the bells and whistles, opt for lower-fat cheese (Goodson recommends 2%), and deck your burger out with crunchy veggies instead of bacon. As for the sauce, Goodson suggests mashing some avocado in lieu of a creamy sauce or using a low-cal option like mustard. And skip the buttered white bun—try a 100% whole grain bun or "thins" bun to increase the fiber and nutrients, she says.