Popular Sodas That May Be Linked to Liver Damage, According To Science

It's no surprise that soda is unhealthy, but certain cans are more likely to affect your liver than others.

If you've been waiting on a sign to kick your soda habit, let this be it.

Soda is even more dangerous to your health than you might realize. Many popular sodas have a high amount of high fructose corn syrup (HFCS), which has been linked to several health risks—most notably those that affect the liver. That's why there's been a targeted approach in recent years to teach consumers how to look for and avoid high fructose corn syrup in products, particularly processed foods and drinks.

Among its many risks, high fructose corn syrup has been found to increase the risk of non-alcoholic fatty liver disease. Yes, soda can cause similar health problems as alcohol. A 2020 study in Nature Metabolism found that mice who were fed high fructose corn syrup over longer periods of time showed signs of deterioration in the intestinal wall barrier and inflamed livers.

"Unfortunately, many processed foods contain HFCS and most people cannot estimate how much fructose they actually consume," said Michael Karin, lead author of the study.

Are you consuming too much high fructose corn syrup? If you have a habit of drinking any of the following popular sodas, you may want to consider finding healthier alternatives sans HFCS. And for more healthy tips, be sure to check out our list of the 108 Most Popular Sodas Ranked By How Toxic They Are.

Coca-Cola is one of the most popular sodas on the market. Every second, more than 10,000 Coca-Cola drinks are consumed globally. Unfortunately, many of these sodas, particularly in the U.S., contain high fructose corn syrup as the second ingredient, right after water. The company switched from cane sugar to HFCS in 1980, and it is still the main ingredient—second only to carbonated water. It's not made like this everywhere, though. Many people today prefer to buy Coca-Cola made in Mexico, as the drink is made with sugar instead of HFCS in this country and others.

Whether your soda is made with cane sugar or HFCS, though, you'll want to enjoy it in moderation, as fructose consumption in any form could cause metabolic disease.

Coca-Cola's primary competitor is also a global brand with high fructose corn syrup as one of its main ingredients.

But even a regular Pepsi with dinner or on your lunch break can become problematic. One study from Duke University Medical Center found that high fructose corn syrup can lead to fibrosis of the liver, or liver scarring. The lead author, Dr. Manal Abdelmalek also warned that patients with non-alcoholic fatty liver disease, which has been linked to HFCS in recent studies, have increased risk of further liver damage, including "liver failure, liver cancer, and the need for a liver transplant."

Don't you want a Fanta? No, probably not. This is another popular soda with a variety of fruity flavors and high amounts of HFCS to lure in consumers.

Another study in Hepatobiliary Surgery and Nutrition found that human trials of HFCS were linked to both metabolic abnormalities, such as diabetes, and non-alcoholic fatty liver disease, which on its own can increase the risk of cirrhosis and heart disease. (Related: Easy Ways You Can Prevent Heart Disease and Diabetes, According to a Registered Dietitian)

Owned by Pepsi, Mt. Dew is well-known for being chock-full of sugar, but you might not realize that the sugar is actually in the form of high-fructose corn syrup.

In fact, a 12-ounce can of this neon soda contains a whopping 46 grams of sugar, far more than the recommended daily amount.

As researchers learn more about the connection between HFCS and liver damage, it makes it that much riskier to drink these sugary beverages.

Dr. Pepper prides itself on its "signature blend of 23 flavors," despite most of that flavor actually coming from the second listed ingredient: high fructose corn syrup.

A study on HFCS and metabolic syndrome found that sodas are a leading source of HFCS in U.S. diets and that this ingredient can lead to further health risks, including hypertension, insulin resistance, and dyslipidemia, an excess amount of lipids in the blood. 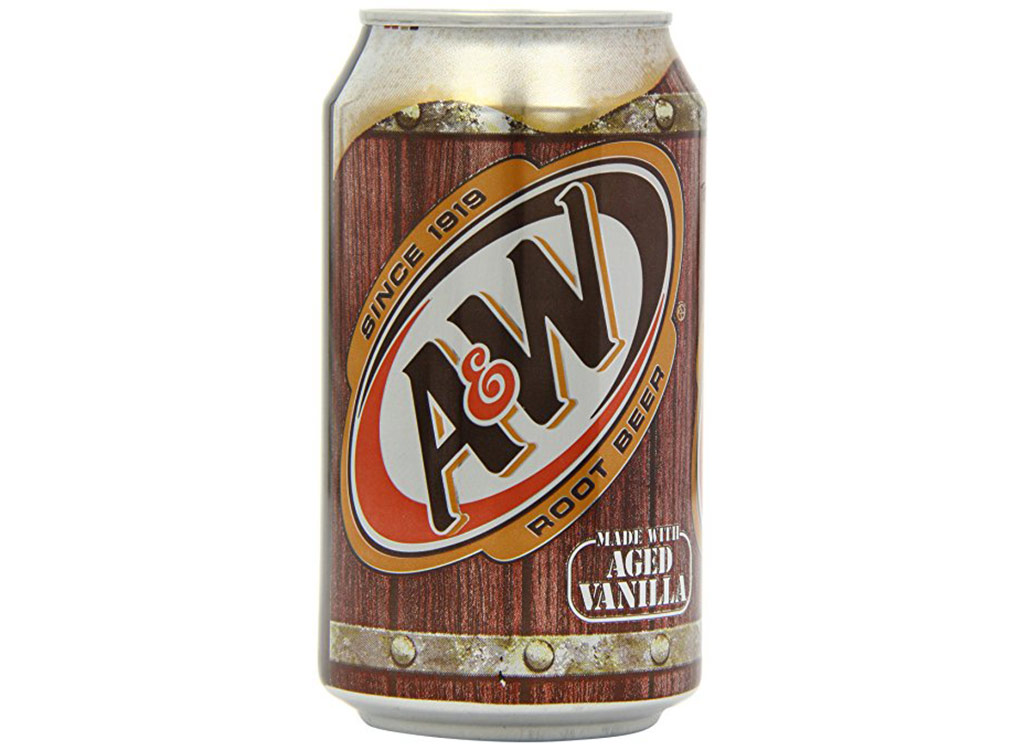 With 45 grams of sugar in a 12-ounce can, it's not surprising that drinking a lot of A&W Root Beer can be detrimental to your health.

According to Harvard Health, the average person in the U.S. during the early 1900s consumed about 15 grams of fructose from natural sources, like fruits. With the rise of high fructose corn syrup in the 1980s, our consumption of this ingredient has risen. Today, it's about five times what it was in the earlier part of the last century.

That dramatic shift in diets has led to about 30% of people in the U.S. having non-alcoholic fatty liver disease.

7Up is a popular lemon-lime soft drink that is sometimes touted as a beverage that can help when you have a stomach ache.

But with the amount of HFCS in each can or bottle, it's hardly doing you any favors. Harvard Health explains that HFCS as well as an excess of sugar in any form are not just dangerous for the liver but can also cause problems for the heart and arteries.

Like 7Up, Sprite is a refreshing, lemon-lime soda is often enjoyed just for the sake of enjoying or specifically to ease an upset stomach. Because it doesn't contain caffeine, this is also a beverage that parents will often allow kids to have.

But like the rest of these popular sodas, one of the main ingredients in Sprite is high fructose corn syrup.

According to the University of San Francisco California, about 13% of children in the U.S. have non-alcoholic fatty liver disease, which can lead to inflammation and steatosis, or scarring. Some people who have liver damage have a risk of going into cirrhosis, which if not treated promptly with a liver transplant, can lead to death.

So while a soda here and there might be fine as a treat, it's best to find healthier alternatives for your favorite soft drinks to avoid serious and even fatal health implications related to high fructose corn syrup consumption. On top of ditching your can of soda to protect your liver, you may also want to consider giving up these Drinking Habits That Cause Liver Damage, According to Science.

Paige Bennett
Paige is a Los Angeles-based editor and freelance writer. In addition to writing for Eat This, Not That!, she works as the content editor for Inhabitat. Read more
Filed Under
Health Tips // News // Soda // Tips