5 Unique Citrus Fruits That You Should Be Eating Right Now

Research has shown that citrus flavonoids protect against diabetes and heart disease, help to lower cholesterol, and fight against cancer, among many other benefits.

Right now is the best time to eat them, too.

Sure, you can find regular ol' oranges and grapefruits almost any time of year. But there are many other more interesting seasonal varieties, which are only available for a short time. January through February is prime time for these healthy, flavor-packed dynamos.

"The more variety you can get when it comes to citrus (or any fruit for that matter), the better," says Lyssie Lakatos, RD, CDN, who along with sister Tammy Lakatos Shames, RD, CDN, are known as the Nutrition Twins. "While pink grapefruits and navel oranges are great and have their own benefits as well, scientists are discovering different phytochemicals in different produce, and each has a separate benefit that positively affects health in a different way, so the more beneficial compounds you can consume, the better!"

Start your delicious, flavonoid-fueled adventure by seeking out these exceptional varieties, which won't be around for long. 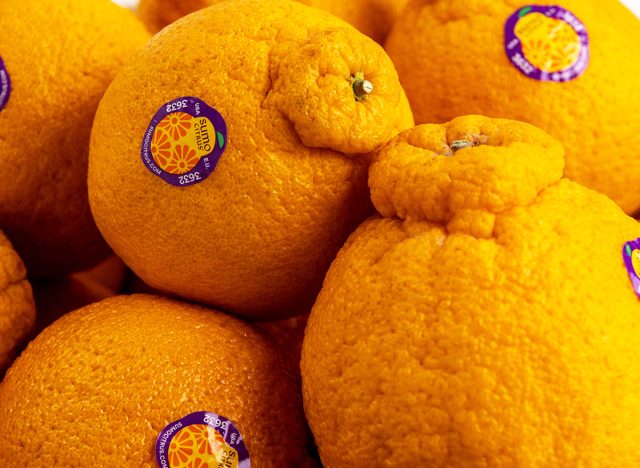 Known in its native Japan as the Shiranui, this jumbo-sized mandarin hybrid has been produced in California since 2011 and gets more and more popular every year. "It is hands-down the best-tasting citrus that's ever been developed world-wide," says Roger Smith, a fourth-generation California citrus grower, nurseryman, and variety expert. Branded the Sumo based on its Japanese origin and unique appearance—"squatty thing with a top knot on it, it kind of looks like a Sumo wrestler," says Smith—the fruit is easy to peel, easy to segment, and a lot less messy than other varieties. They're also highly aromatic and super sweet. "It just explodes in your mouth with flavor that's really unrivaled by any other citrus," says Smith.6254a4d1642c605c54bf1cab17d50f1e

"Sumo oranges are vitamin C superstars, packing in 163% of the daily recommended value for vitamin C, compared to 92% in a traditional orange, mainly because of their large size," according to the Nutrition Twins. That's especially helpful for protecting against cancer, heart disease, and other chronic diseases, as well as keeping skin youthful since vitamin C is essential for collagen formation, they add.

Originally from Italy, blood oranges (the Moro variety being the most common in America) have been around for a while, but are still considered underused in America. What makes them unique is their dark-colored pigmentation from the anthocyanins within. These flavonoids are uncommon in other citrus and are thought to have powerful, cancer-fighting antioxidant effects, according to the Nutrition Twins.

"The blood orange makes juice great and has a completely different kind of flavor, with a lot more acidity, than a Sumo," says Smith.

Hailing from Venezuela, the Cara Cara is a navel orange mutation that stands out for its pink flesh. That unique pigmentation is due to its carotenoids, which include lycopene, one of the most potent antioxidants, per the Nutrition Twins. Lycopene may play a role in preventing heart disease, cancer, and macular degeneration.

"The health benefits of a pink-pigmented fruit are superior to other ones," agrees Smith, who describes the flavor as "very consistent." Unlike a traditional navel orange, of which there are many different strains, the Cara Cara is a singular strain unto itself, he adds. That's a big reason why it is so uncommon to find it out of season.

The granddaddy of all citrus, the hulking pummelo can weigh as much as two to four pounds. "You're never going to find anything bigger citrus-wise in the grocery store," Smith says. Similar to a grapefruit, but larger and less messy, the pummelo is also one of the trickiest types of citrus to eat, thanks to the thick membrane between the pulp and the rind. "You have to cut them apart and slowly remove the segments by hand," says Smith, adding that they're nonetheless "great in salads" and fun to try in general.

Research has shown that the pummelo may be very powerful when it comes to preventing cardiovascular disease as well as cell damage that comes with aging, thanks in part to the powerful antioxidants it contains like vitamin C, gallic acid, hesperidin, and naringin, according to the Nutrition Twins. "Interestingly, the pulp color of the pummelo varies from pale to bright red, and the more pigment in the pulp, the more carotenoids, mainly lycopene, it has."

A cross between a grapefruit and the mandarin orange, the Minneola Tangelo is juicy and tart with "a little more spiciness" than other citrus, Smith says. Seedless and easy to peel, the fruit has a lot of health perks, too.

"With 100% of the daily requirement for vitamin C, Minneola Tangelos provide an antioxidant boost that helps to fight oxidative stress and inflammation in the body," note the Nutrition Twins. "Flavonoids like hesperidin found in tangelos and other citrus fruits have been found to reduce the risk of stroke, heart disease and neurological disorders and to help reduce the symptoms of Irritable Bowel Syndrome (IBS) since they're low in FODMAPs (fermentable oligo-, di-, monosaccharides, and polyols, which are types of carbohydrates). Tangelos fit in the low-FODMAP diet, while some other citrus fruits, like grapefruit, don't."

Chris Shott
Chris Shott is the Deputy Editor covering groceries for Eat This, Not That! Read more about Chris
Filed Under
Fruit // Grocery Shopping