These soups are unsuspecting high calorie, sodium, and fat bombs you'll want to keep out of your shopping cart.

Look into most people's kitchen pantries, and there's a good chance you'll find a few canned soups. They last for quite some time, pack a lot of flavor, and are ready in just a few minutes. Plus, who doesn't love a warm bowl of soup? Making a batch from scratch is ideal, but that's not always possible. So that's where the trusty canned versions come in.

While soup makes for a delicious comfort meal, it's important to note that some canned types are far better for you than others. You might just be surprised to uncover some canned soups are true sodium and fat bombs!

To help you best navigate the grocery aisles, we've rounded up some of the worst canned soups out there so you know exactly which ones to avoid. And for when you're ready to spend some time in the kitchen, check out 100 Easiest Recipes You Can Make. 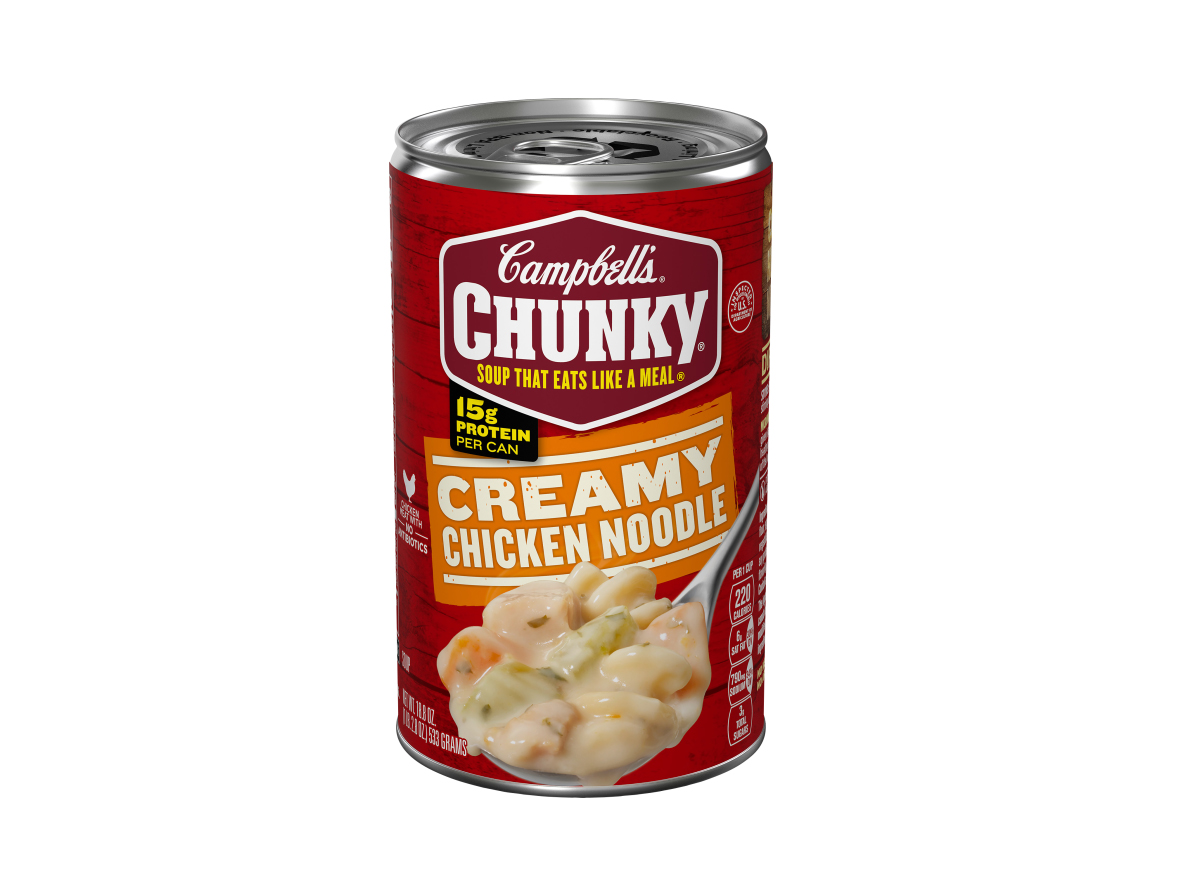 A creamy version of the classic chicken noodle sounds rather decadent, doesn't it? While Campbell's Chunky Creamy Chicken Noodle does serve up a solid 15 grams of protein per can, that seems to be the only upside to this soup. Overall, it has a high amount of calories, fat, saturated, and sodium. This one can has more sodium than you would get if you ate 151 Lay's Classic Potato Chips.

If you see something labeled as "rich and hearty," that is often a red flag. Here, corn chowder is mixed with chicken and bacon that is said to create a soup that "warms the heart." Well, the fact that you'll be slurping on 1,800 milligrams of sodium is reason enough to keep away—and that decision will best help your heart!

The American Heart Association recommends most adults consume no more than 2,300 milligrams a day, with hopes of moving toward an ideal limit of no more than 1,500 milligrams per day. So this soup is not helping that cause, in the slightest! 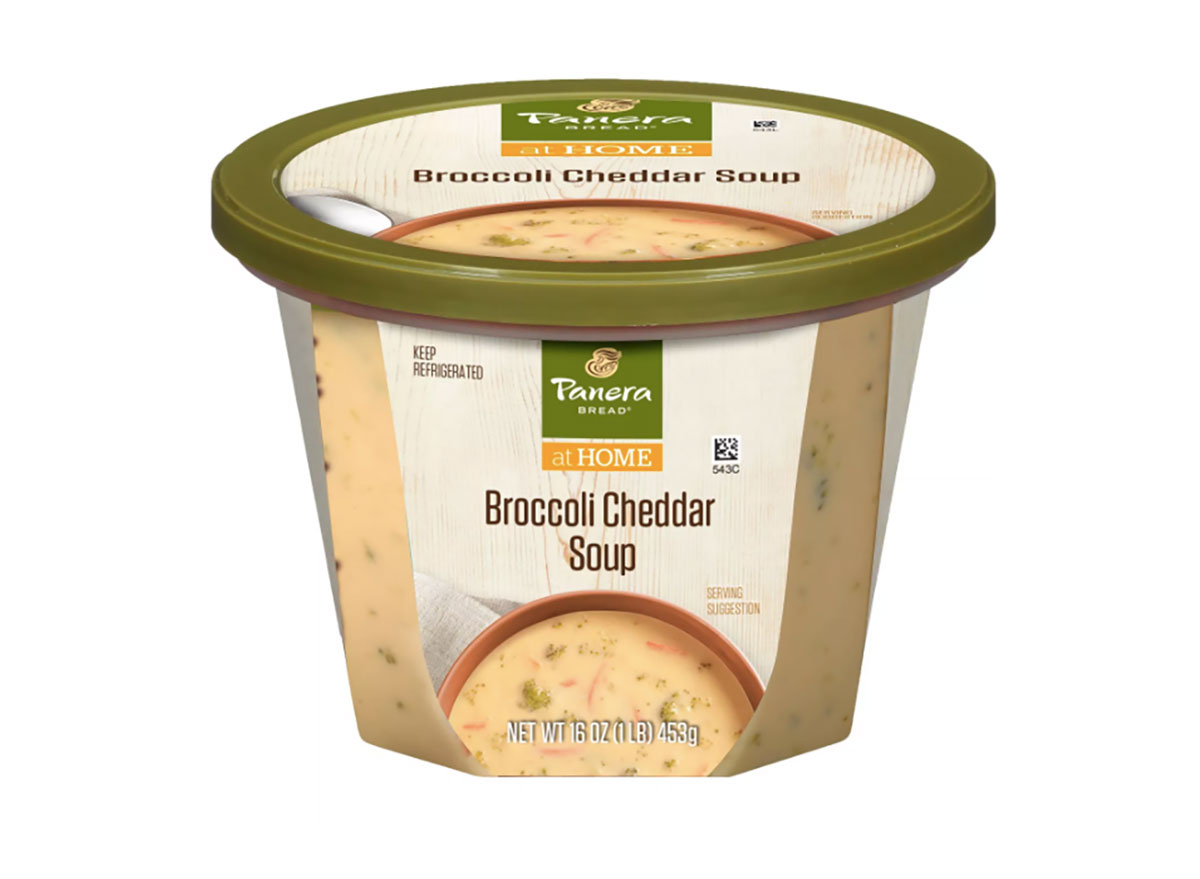 So technically this soup doesn't come in a can, but all it takes is a few minutes in the microwave, and you're able to have a Panera Bread staple at home, so we had to include it. It's no secret that Panera's Broccoli Cheddar Soup is iconic, but that doesn't mean it's necessarily healthy.

This high-calorie creamy soup is not only packing when it comes to sodium, but it even has one gram of trans fat. This type of harmful fat is simply bad news. It not only lowers your HDL levels (aka your good cholesterol), but promotes inflammation, and can even trigger heart disease, stroke, diabetes, and other chronic conditions, according to Harvard Health.

And just so you know, this is the way to make healthier comfort foods.

While this tomato soup from Amy's seems harmless as it's much lower in calories and fat than other options, again, the sodium is high. One can has as much sodium as you could get if you ate from 134 pretzel sticks! Plus, this soup has 25 grams of sugar, too. So it's both a sodium and sugar trap—no thanks!

Campbell's Homestyle line of soups might be rich and creamy, but you'll want to avoid picking up any of these. The New England Clam Chowder, for example, has more than 1,900 milligrams of sodium. If you ate two cheeseburgers and a small order of fries from McDonald's, you would consume 290 milligrams less of the salty stuff than if you ate this soup.

Don't think Progresso's take on a broccoli and cheese soup is any better than Panera's! This soup includes smoky bacon bits and is only serving up 40 milligrams less of sodium than Panera's. A major downside of eating salty foods often? You just might start packing on the pounds, or find it hard to lose weight. Researchers at Deakin University found that consuming excess salt can lead you to not only crave more fatty foods but ultimately eat more of these foods, too.6254a4d1642c605c54bf1cab17d50f1e

Campbell's chicken and dumplings soup takes the comforting southern classic to new levels, but not in the best way. See, while this can is packing in fiber and protein, the more than 1,900 milligrams of sodium is troublesome. If anything, just know that cream-based soups are never a safe choice.

Jennifer Maldonado
Jennifer Maldonado is a senior editor at Eat This, Not That!, specializing in food and health content. Read more about Jennifer
Filed Under
Groceries // Soup // Unhealthy