The Fattiest Restaurant Meals in America

Save your heart, waistline, and ultimately your life by staying away from these menu items at all costs!

Americans are notorious for consuming too much of everything: calories, sodium, carbohydrates, and yes, fat. Contrary to what many may believe, big-chain restaurants are often times the host of larger-than-average, unhealthy meals—more so than fast-food restaurants even. So that means, to the American consumer's misfortune, a lot of meals served at these famed sit-down chain restaurants comprise far too much fat and there's a chance you might just be chowing down on some of the fattiest restaurant meals in the country.

See, the 2015-2020 American Dietary Guidelines say that you should limit your fat intake to 35 percent of calories on a daily basis for a healthy lifestyle. So for the average person, that's about 78 grams of total fat per day. The team at Eat This, Not That! set out to discover the fattiest restaurant meals out there so that way you can basically avoid ordering these dishes the next time you head out to dinner.

In order to compile a list of the fattiest plates served at full-service restaurants, we assessed the nutritional content of roughly 60 dishes from some of the nation's most popular full-service restaurants. On this list, seven restaurants are the culprits of producing 20 of the most fat-laden meals you can order. Just how fat-filled are they? The meal with the least fat contains 129 grams of the stuff and one-quarter of the dishes on this list contain at least double your daily recommended value of fat. Check them out, ranked from least worst to the absolute worst. It all might just make you decide to cook dinner at home and skip dining out as much…

Fish is without question one of the healthiest foods you can eat. However, this dish covers everything that was healthy with batter and oils. Not only is the fat content of 121 grams a day an a half's worth of your daily dietary recommendation of 78 grams, but it also packs a gargantuan amount of sodium. For context, you should consume a max of 2,300 milligrams of sodium per day, and this meal exceeds that value by over 600 milligrams.

This bowl of pasta has southern soul food written all over it. Unfortunately, this fried, creamy plate of heaven is not something to be praised. Just one serving contains 4 grams of trans fat, which raises your bad cholesterol levels known as LDL, according to the American Heart Association. 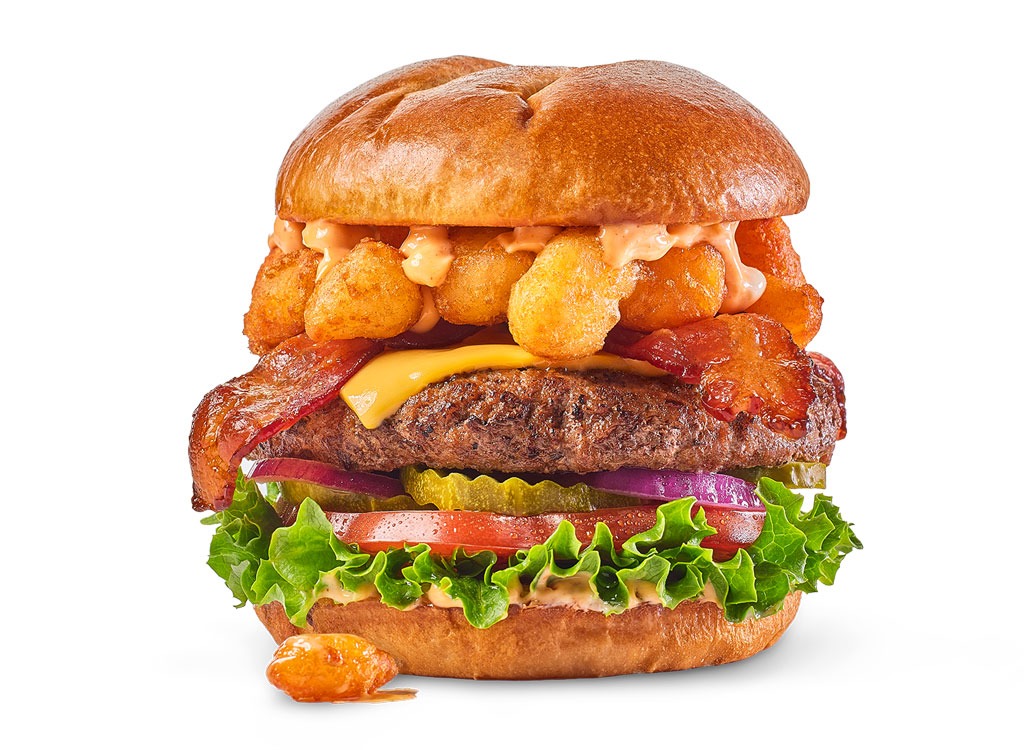 Buffalo Wild Wings may be known for its, well, expansive list of chicken wings, but it also offers calorie-packed burgers such as the one above. The cheese curd and bacon-filled burger packs a whopping 145 grams of total fat, which is comparable to eating about 85 of Lay's chips.

Don't let this photo fool you. While the portion sizes of this decadent chicken parmesan, lasagna bolognese, and fettuccine Alfredo appears to be modest, they're most certainly not. If eaten in one sitting, the meal exceeds your entire day's worth of calories by about 100 calories as well as your daily allowance of fat by just over 50 grams. Yikes!

Who doesn't love a carb-laden bowl of creamy pasta? Unfortunately, like many dishes from the Cheesecake Factory, this one is chock-full of the bad stuff such as excess saturated fat, sodium, and even too much protein. All of which put extra stress on the heart. Do yourself a favor and skip the crispy beer battered shrimp pasta and opt for a more sensible menu item that costs you a quarter of the energy and nutrients!

It's utterly shocking to see a plate of French toast with a side of bacon accumulate 131 grams of fat. You could satisfy your day's worth (plus some) of every macronutrient with this meal order.

Say hello to this artery-clogging burger. But seriously, there's 245 milligrams of cholesterol in the juicy burger, which is almost your entire's day worth at 300 milligrams. Those with a high risk of heart disease should especially steer clear, because this meal surpasses their daily recommended allotment of just 200 milligrams.

Clocking in at 137 grams of fat is Chili's bacon ranch and beef quesadilla. For context, 137 grams is nearly double the amount of fat in an entire pint of Häagen-Dazs chocolate ice cream, which amounts to 68 grams of fat. This quesadilla is also chock-full of saturated fat, coming in at a whopping 46 grams. And for reference, only a mere 10 percent of the calories you eat per day should be saturated fat.

O'Charley's Nashville Hot Baby Back Ribs (With Fries and Broccoli)

Is it just us or do these ribs appear to be glistening in this photo? Not so fast though! Before sinking into a slab of these bad boys you should be warned—the fat content is sky-high at 142 grams, as is the sodium content at 5,510 milligrams. That's more than double the daily recommendation of just 2,300 milligrams of sodium!

Talk about double trouble. As if one generous helping of cheese wasn't loaded in fat on its own, Uno Pizzeria & Grill decided to amp up the fat content with this double grilled cheeseburger.

OK, but is this burger really going to make you happy? We would argue that's not the case. This bacon-stacked burger contains an off the charts number of calories, fat, sodium, carbs, and even protein. To put into perspective just how much 82 grams of protein is, the typical woman (who does not exercise) should consume about 45 grams a day—that's nearly double her daily necessary intake! Men who lead sedentary lifestyles should only consume 56 grams, which also falls well below the protein this burger offers.

Just when you thought the cheesecake was the fattiest food item on the menu at the Cheesecake Factory, they offer a meal such as this. The sandwich packs 145 grams of total fat, 65 grams of which is pure saturated fat. Sorry buddy, but this one may take a toll on your heart if ingested on the reg.

The Cheesecake Factory strikes out yet again with another fat-laden meal. The restaurant's pasta carbonara with chicken houses nearly 70 grams of saturated fat, well above the recommended 13 grams the American Heart Association says is safe for heart health.

Even though this behemoth dish is reserved for Cheesecake Factory goers in Hawaii, we're still shocked the chain would even offer something like this. It's packed with fat, sodium, and protein. Beware though, this seemingly harmless chicken and rice dish is not something you want to indulge, especially all at once!

This isn't your ordinary breakfast sandwich. A sandwich of this caliber is absurdly unhealthy clocking in at 147 grams fat, 4,220 milligrams sodium, and 92 grams protein. That's right, it actually makes McDonald's bacon, egg, and cheese sandwich at 550 calories and 25 grams fat look healthy.

Um, excuse me Cheesecake Factory? Why does your plate of fettuccini Alfredo contain a whopping 83 grams of saturated fat? A stick of butter is only 58 grams!

Is it just us or does this broccoli look extremely out of place on this plate of deep-fried shrimp, bay scallops, clam strips, and flounder? Opt for a grilled variety of seafood to blast belly fat—not add more of it!

This dish doesn't exactly embody the heartiness of a bowl of Thai chicken curry. In fact, it couldn't be more different in terms of health benefits. At a staggering 2,790 calories and 172 grams of fat, this is one of the fattiest dishes you can order from a restaurant chain in the United States.

That nutritional information also includes the side of chile-garlic toast, garlic dill pickles, homestyle fries, and roasted street corn—as if three different meats wasn't enough. Meat lovers surely appreciate this heart-stopping platter for one. This heart attack on a tray costs you nearly three times your daily amount of sodium, not to mention double the amount of total fat.

There is over one entire pound of meat between this bun. At 3,510 calories, 252 grams of fat, and 8,690 milligrams of sodium this sandwich (that is made for one person) is undoubtedly the most unhealthy of its kind. This burger has as much sodium as just over 48 slices of cooked bacon. Anyone else need a detox after reading all this?