17 Worst Foods to Eat During the Pandemic

Sorry, but eating veggie chips isn't going to help meet your vegetable serving for the day.

The world is still living through a pandemic and even though most cities are easing up when it comes to certain restrictions, most people are still choosing to spend most of their time at home. And that means you're probably still cooking and eating most of your meals at home, too. There's a chance you're continuing to feeling motivated to eat the healthiest foods you can. After all, you're still not able to head to the gym! So while you're stuck at home, you want to be able to at least the best food choices that will keep you, well, your healthiest, as you want to do all you can to not get sick or catch any unwanted germs.

Here, we rounded up the foods you'll easily find at the supermarket that you simply just shouldn't eat during a pandemic. What makes them so bad? Well, they don't provide you with valuable nutrients, and can even lead to weight gain—something you surely don't want to happen!

Bread is obviously one food that makes sense to stock up on during a time like this, and there's a chance you're grabbing the whole wheat bread. It must be healthier, right? Well, unfortunately, many loaves are actually packed with high fructose corn syrup and molasses, serving up unnecessary sugars, and have ingredients lists that are miles long filled with ingredients you most likely don't recognize. Be sure to avoid any bread marketed as "honey whole wheat" to avoid those added sugars and instead choose a sprouted bread such as Ezekiel.

Ice cream is just one of those foods you can't help turn to, as it's the ultimate comfort binge. But ice cream—even the ones that are deemed better for you—is basically one of the worst foods to be eating a lot of during this time. And why is that? Well, ice cream can cause inflammation in the body because of the high amounts of dairy and sugar, and when inflammation is high, "it taxes the immune system leaving us more susceptible to disease and illness," Sydney Greene, MS, RD, told us in a previous article.

It's no secret we're big peanut butter fans here, and it is a health food full of heart-healthy monounsaturated fats and muscle-building protein. But you want to make sure you're buying the right peanut butter. See, popular processed peanut butters often have added sugar and unhealthy oils and those low-fat peanut butters aren't any better. They too have tons of added sugars to make up for the fat. Always go for the jars of natural peanut butter.

Granola isn't healthy all the time, either. Some granola brands not only use processed oils, but they're packed with sugar, thanks to the dried fruit and chocolate chips you'll find mixed in. Plus, a cup of the stuff can clock in with a high amount of calories and fat.

Whipping up a bowl of oatmeal is a solid way to start your day, if you're doing it right. Choosing instant, flavored oatmeal might save you time and seem like you're making a healthy choice, but you're just eating a ton of sugar. Just one packet of Quaker Maple and Brown Sugar Oatmeal has 12 grams of sugar in it—no thanks! Instead of sugary oatmeal, try making any of these healthy overnight oats recipes for weight loss!

Shelf-stable milks might seem like a better choice than the dairy variety right now, but those favorite flavored soy milks might just be worse for you. Soy milk is often heavily sweetened, as a cup of Silk brand's chocolate soy milk has 15 grams of sugar, with 14 grams being—you guessed it—those dreaded added sugars.

Egg substitutes are mostly egg whites, but eating the whole egg is actually much better for you, overall. Egg yolks contain tons of vitamins, including vitamin D, which an American Journal of Clinical Nutrition study has linked to lower rates of obesity and reduced abdominal fat. And when you're spending more time inside not moving your body around as much, you're going to want to do all you can to stay on track with your health goals.

During a time when you're stocking up on canned foods, you might grab some beans, as they are generally healthy for you. But the same can't be said of baked beans. A half cup of Bush's Original Baked Beans has 150 calories and packs 560 milligrams of sodium and 12 grams of sugar—that's more sugar than in one Reese's Peanut Butter Cup. 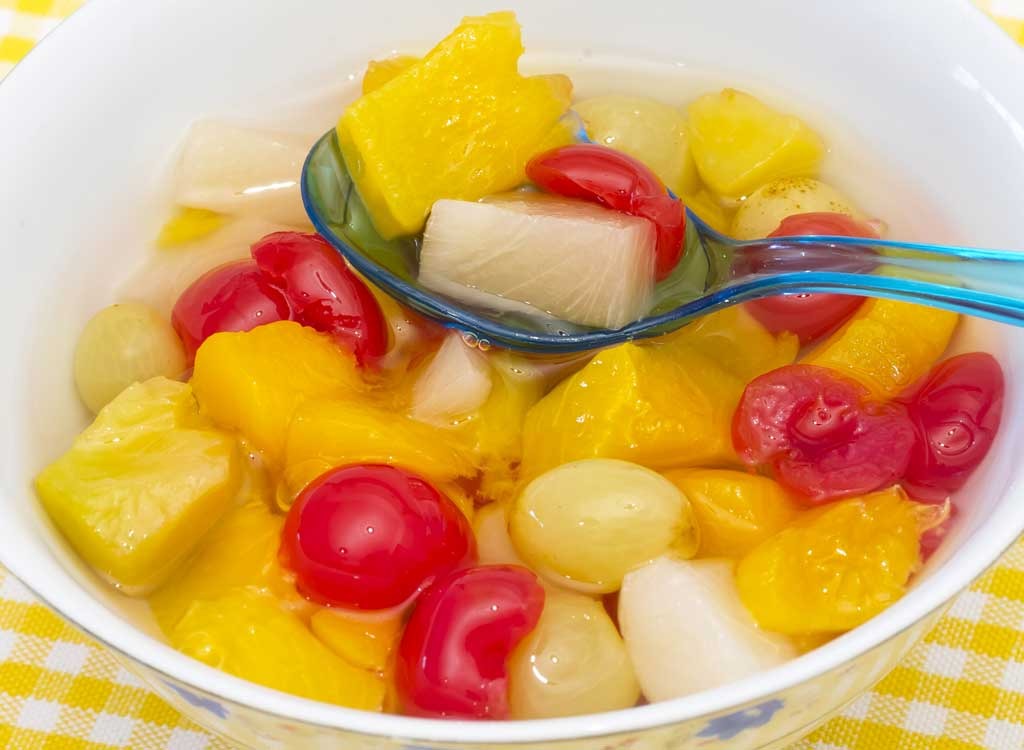 Fruit is obviously a great addition to any diet, but now, you might not have as much access to fresh fruit. Fruit cocktail isn't the alternative you should be having instead, though. Typically, they are as long as you're not soaking it in syrup, which means, yes, more sugar. Take Del Monte's 100 calorie fruit cocktail for example clocks—it has 21 grams of sugar in one can.

Rice cakes are truly a weight loss staple that will last in your pantry for a while. But they are known for being high on the glycemic index (GI). So why is this a bad thing? Well, high GI foods might give you a rush of energy, but a few hours, later, you'll be hungry again, craving more food. Not ideal for when you're living the quarantine life!6254a4d1642c605c54bf1cab17d50f1e

Again, don't let the low-fat label fool you into thinking this is a "healthy" food to stock up on. Low-fat salad dressings often have plenty of adding sugar, high fructose corn syrup, salt, and additives and preservatives, things you're going to want to avoid consuming while you're home, trying to eat the best you can.

A bottled smoothie might seem like an easy way to get your daily fruit and veggie fix, but those bottled smoothies are doing is just adding serious sugar and calories to your diet. For a better deal, blend up your favorite frozen fruits and whip up your own smoothies.

Dried fruit makes for a quick snack or a tasty addition to your oatmeal or cereal that lasts for quite a long time, making it an ideal food to have on hand during this time of a pandemic. But you might want to second-think munching on them as (this really shouldn't be a surprise) they're really just adding tons of sugar to your diet. You're going to find that most commercially-prepared dried fruits are coated with added sugar and are preserved using sulfites, one of the most common food allergens.

Noticing a bit of a trend here—just because it has "vegetable" in the name, doesn't mean it's actually all that great for you. The problem with vegetable oil is that partially hydrogenated vegetable oil can raise bad cholesterol and increase your risk for heart disease. And you don't want to be doing that during this time!

The probiotics in yogurt are what makes it a gut-friendly food. So yogurt is great to have in your fridge, as long as it's not the flavored versions that have high amounts of sugar. Some will cost you 20 grams or more per serving! Instead, go for plain Greek yogurt.

Veggie chips are a great way to get your vegetable serving during a time when fresh veggies are harder to come by, right? Not so fast! These veggie chips aren't going to increase your fiber and antioxidant intake quite like the real stuff, as they often contain veggie powders, which lack the same nutritional value as actual vegetables, along with being high in sodium content.

We're not talking about the fresh-squeezed stuff that is 100% fruit juice, as that is a healthy drink option. But a lot of the fruit juices you'll find on store shelves have high fructose corn syrup and are packed with added sugar. You'll want to steer clear as many of these juices are made with fructose, which is a type of sugar that according to a study in the Journal of Clinical Investigation has been associated with the development of visceral adipose tissue. Yes, that is belly fat. No thanks!

Eat This, Not That!
Inspired by The New York Times best-selling book series, Eat This, Not That! is a brand that's comprised of an award-winning team of journalists and board-certified experts, doctors, nutritionists, chefs, personal trainers, and dietitians who work together to bring you accurate, timely, informative, and actionable content on food, nutrition, dieting, weight loss, health, wellness, and more. Read more about Eat This
Filed Under
Foods To Avoid // Unhealthy