The Best & Worst Gravy Options on the Shelves—Ranked!

Turkey isn't as delicious without a coat of gravy—but not all jarred brands get our stamp of approval.

Eating a Thanksgiving bird sans gravy is a lot like going to Orlando with the kids and not stopping by Disney World to meet Mickey. It's practically a sin! And in the case of the turkey, one that's dried-out and lacking in flavor.

While turkey is undeniably a potent source of nutrition, many people consider it to be the most boring thing on the holiday table. (Admittedly, the competition is pretty stiff!) And cooking a turkey with all of the trimmings, sides, and desserts is enough to make even the most dexterous cook want to throw in the spatula and serve at least a few pre-made dishes—which is precisely how so many people wind up with store-bought gravy on their table.

But you'll want to tread carefully in the Thanksgiving aisle, friends. While gravy may be a condiment for a very wholesome source of protein, it can vary quite dramatically in terms of ingredient and nutritional quality—and we should know. In honor of the upcoming holiday, the Eat This, Not That! team inspected all of the top-selling varieties one by one and ranked them from best to worst. Read on to learn what we discovered about each one. (Plus, find out which are The Unhealthiest Thanksgiving Side Dishes.) 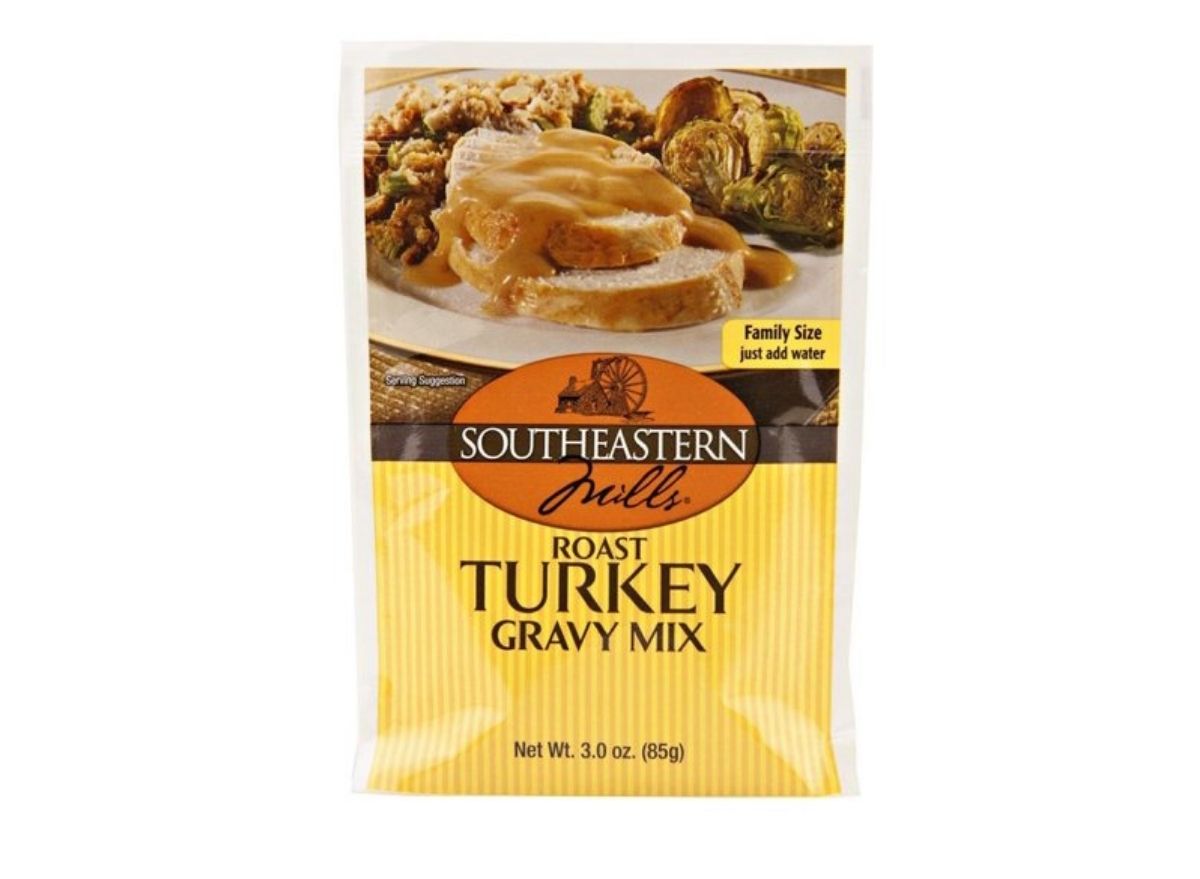 The fact that Southeastern Mills is trying to pass off a blend of 40 chemicals and ingredients as a wholesome gravy worthy of your holiday table is downright despicable. There's no need for trans fat, TBHQ (a type of butane), or stomach-irritating carrageenan to be hanging out in your gravy bowl—especially since other brands have proven it's possible to make a tasty gravy without the stuff.

RELATED: Sign up for our newsletter for more healthy eating tips. 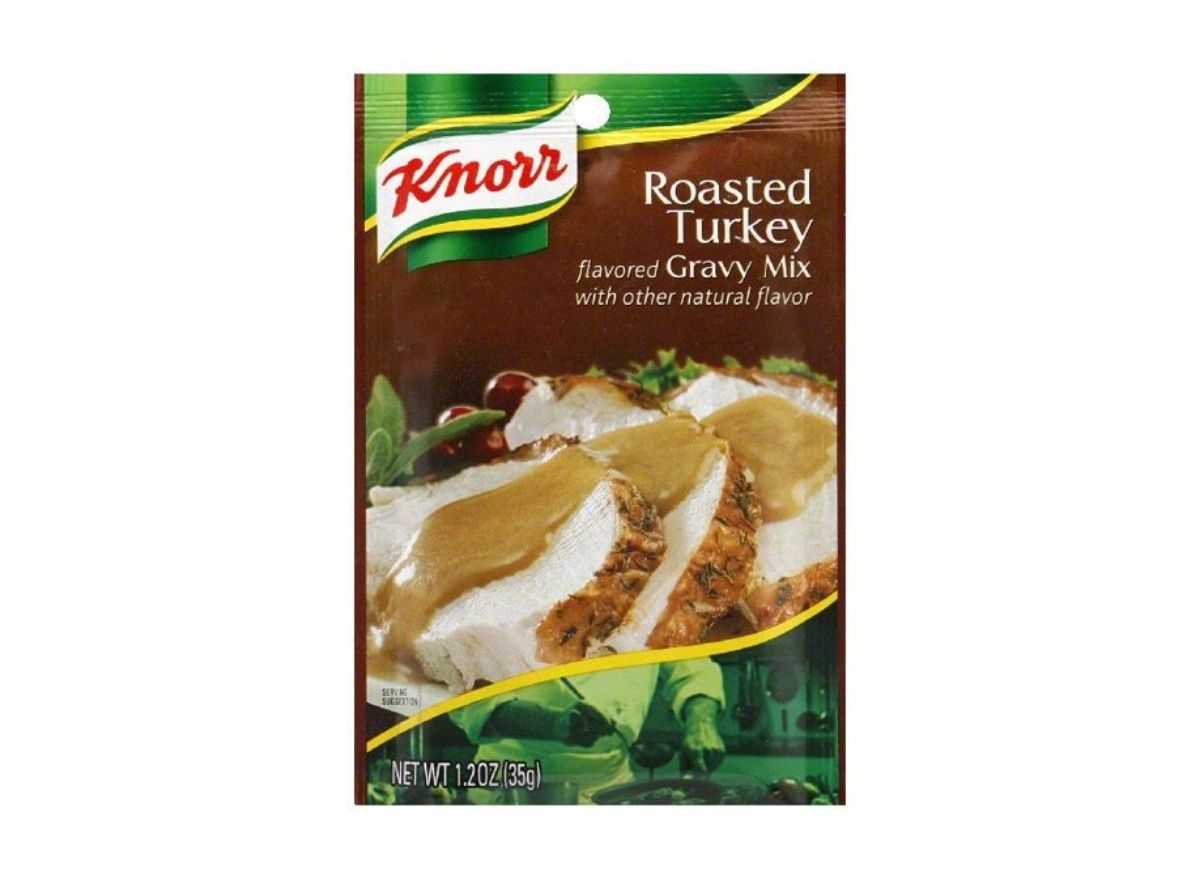 This product may not contain enough fat for it to be listed on the nutritional panel, but that doesn't change the fact that partially hydrogenated soybean oil is used in Knorr's recipe. The manufactured trans fat has been shown to contribute to heart disease more so than saturated fat (it's in a number of these worst foods for your heart), and its artery-clogging effects extend beyond the ticker. Reduced blood flow can impact everything from brain function to sexual function. While most health organizations recommend keeping trans fat consumption as low as possible, a loophole in the FDA's labeling requirements allows processors to add as much as 0.49 gram per serving and still claim zero in their nutrition facts—which is exactly what's going on here. Sneaky! We suggest skipping it since there are better options readily available on supermarket shelves.

RELATED: The Best Homemade Gravy Recipe to Elevate Your Thanksgiving 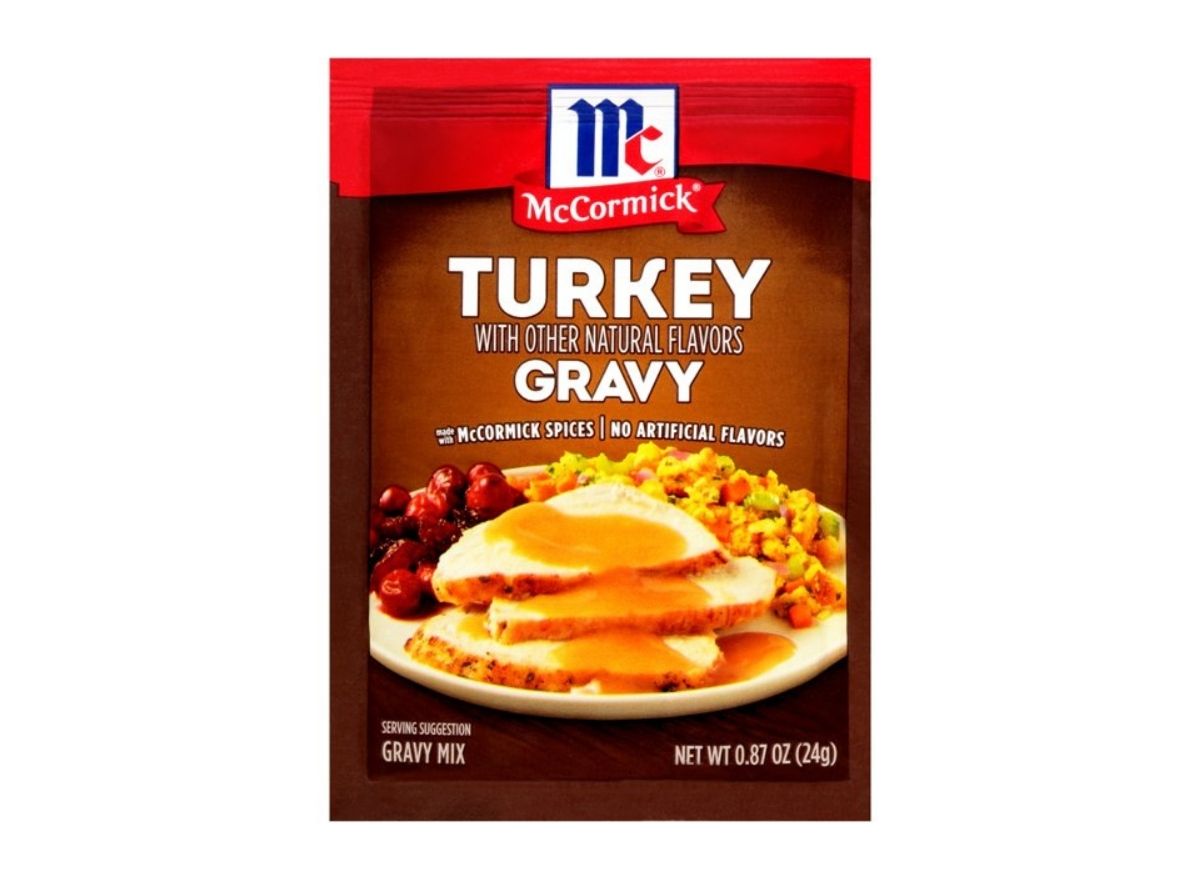 McCormick may be a trusted brand you know and love but you should really think twice about using a gravy mix that relies on caramel coloring and multiple sneaky cousins to MSG to enhance its flavor and appealing brown hue. 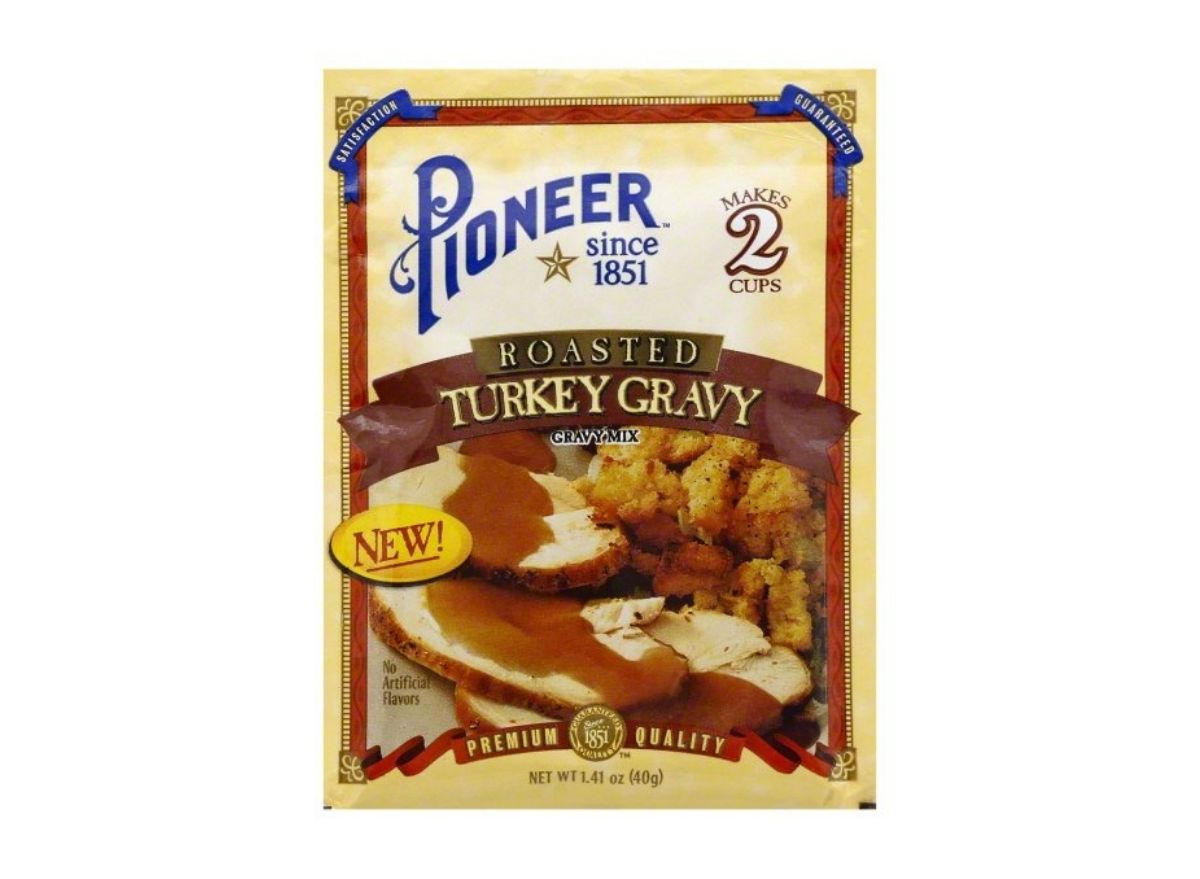 Traces of trans fat, caramel color, and MSG are hiding in this packet of spices and flavors—and we can't say we're too surprised. Are you sensing a pattern here? Because we are. If it's possible to make a gravy sans junky additives, why not do it?

RELATED: The Best Turkey-Cooking Tips, From an Expert 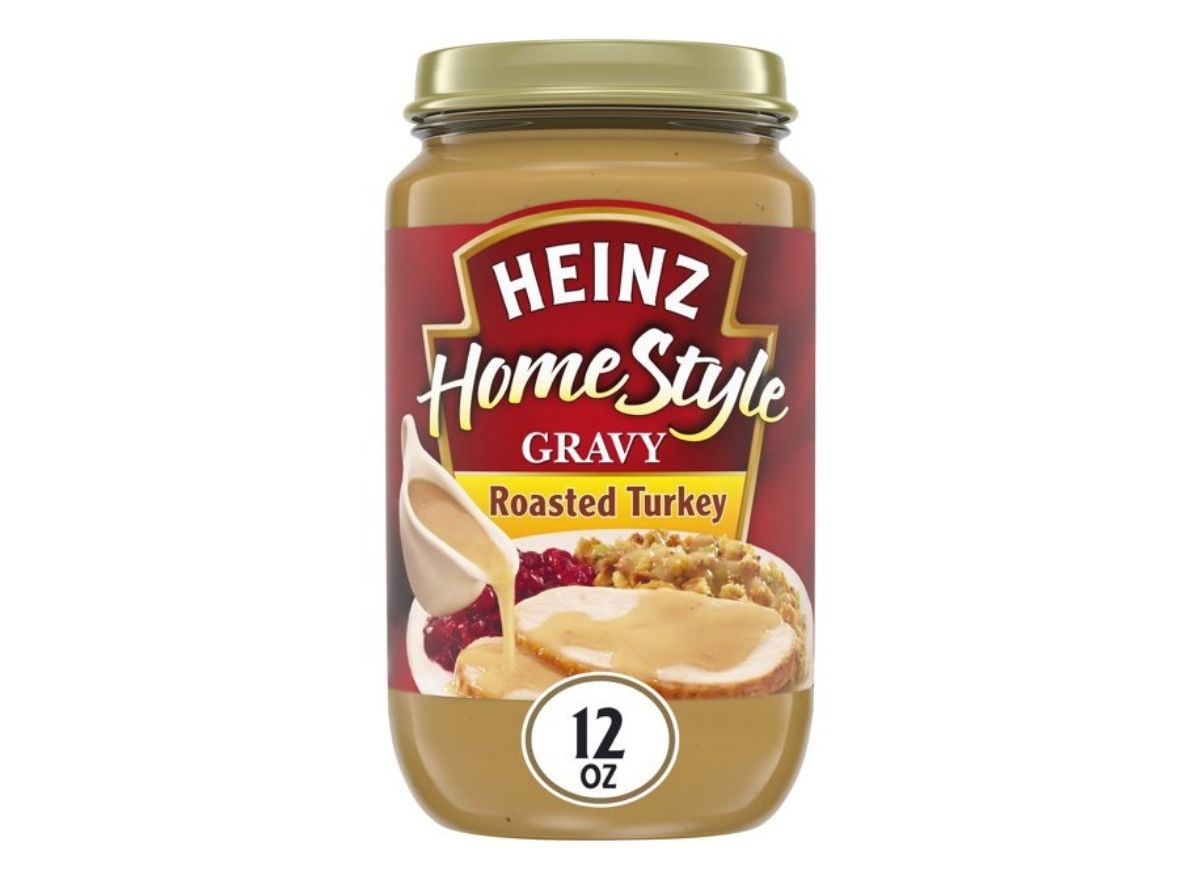 The bulk of this sauce is made of turkey broth and cornstarch—two harmless ingredients. However, we can't ignore the fact that it also contains caramel color and soybean oil. While the former contains a compound that may cause cancer, the latter has been connected to weight gain. When you're already filling your plate to the gills, that's the last thing you want to put into to your body. 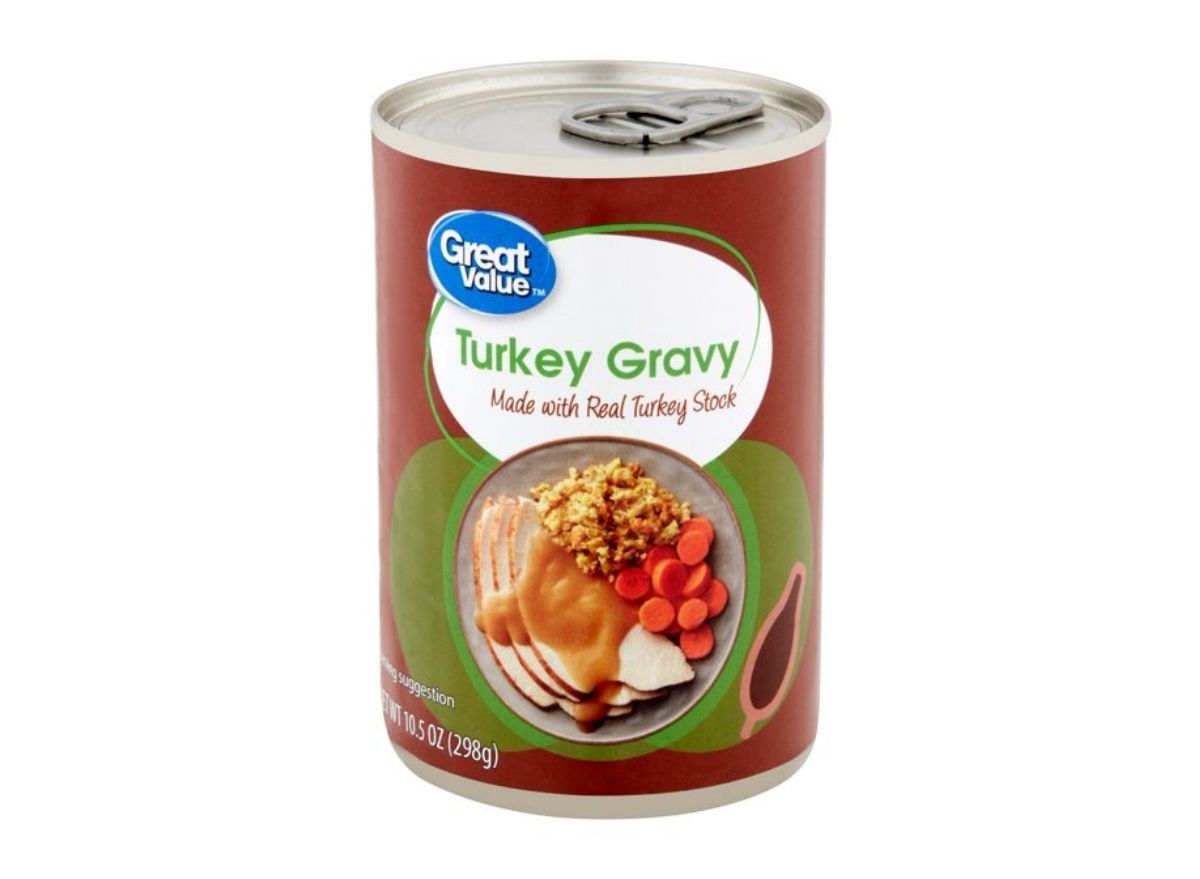 You may be mentally prepared for the food coma that's sure to follow your Thanksgiving meal, but if you indulge in this gravy, you may suffer a throbbing headache, too. It's made with hydrolyzed soy protein, a commonly used flavor enhancer. That may sound innocent enough, but after examining its chemical composition—which is made up of amino acids—it's clear to us that it's anything but innocent. The reason: One of the acids, glutamic acid, can release free glutamate. When this glutamate joins with free sodium in your body (which you have a ton of on T-Day), they form monosodium glutamate (MSG), which is known to cause adverse reactions like headaches and nausea in sensitive individuals.

RELATED: Is MSG Actually Bad For You?
11 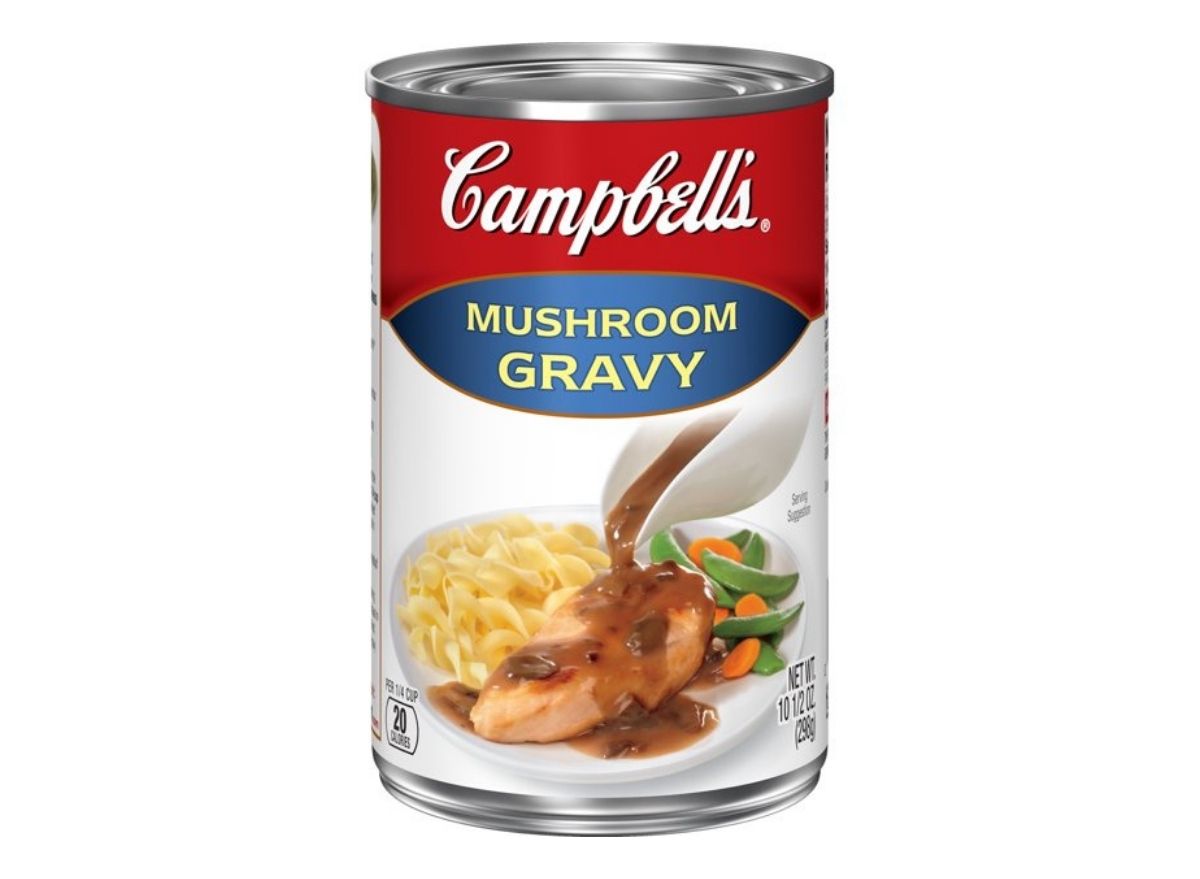 When you see things like monosodium glutamate, caramel color, and hydrolyzed soy protein (a form of MSG) printed on the nutrition panel, know that the product is an automatic Not That!—and this product is no different. Skip this chemical-spiked gravy and pick up one of our more wholesome suggestions instead. 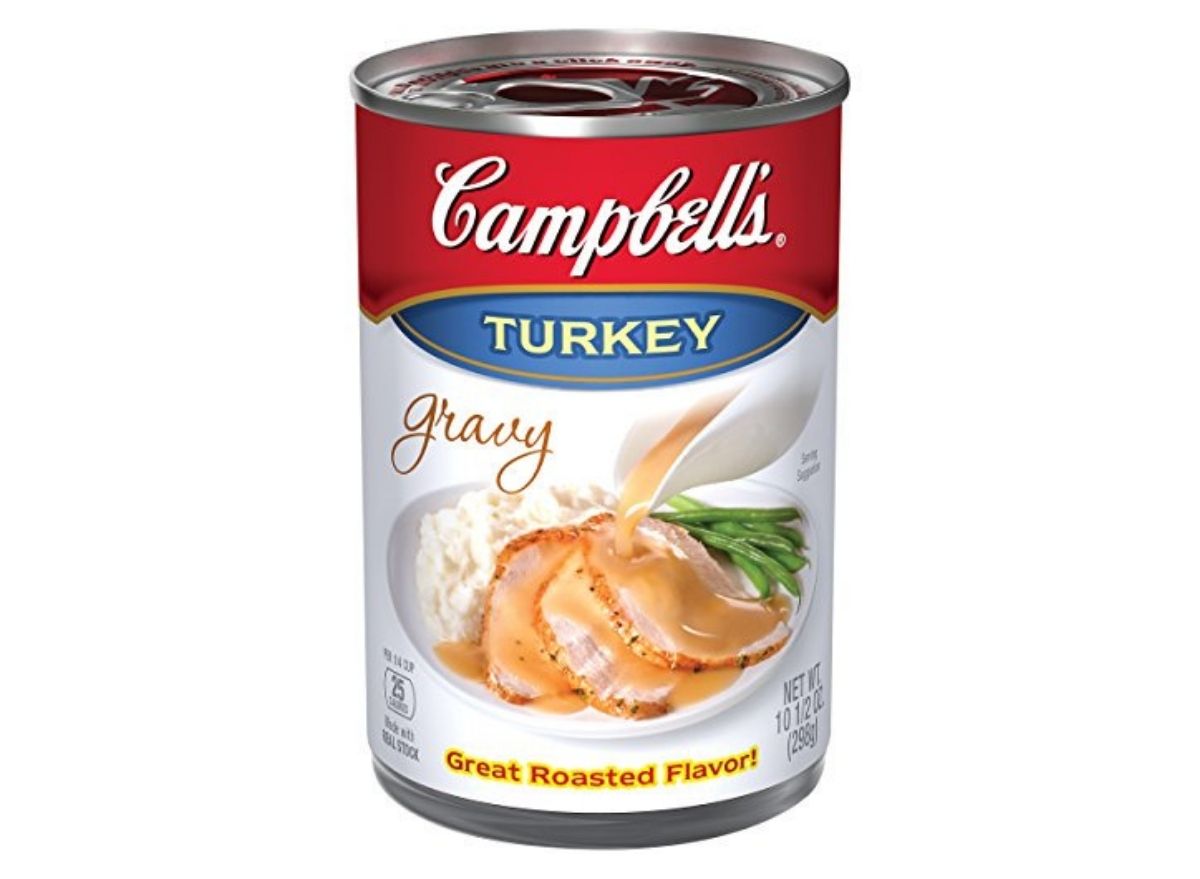 It may have a short ingredient list, but Campbell's—the unofficial Soup King of America—relies on caramel coloring to give its turkey topper a rich golden hue. Buy it if you must, but know that there are better options out there.

RELATED: This Turkey Recipe Has a Citrus and Herbs Twist (Trust Us, You Won't Miss Gravy)
9 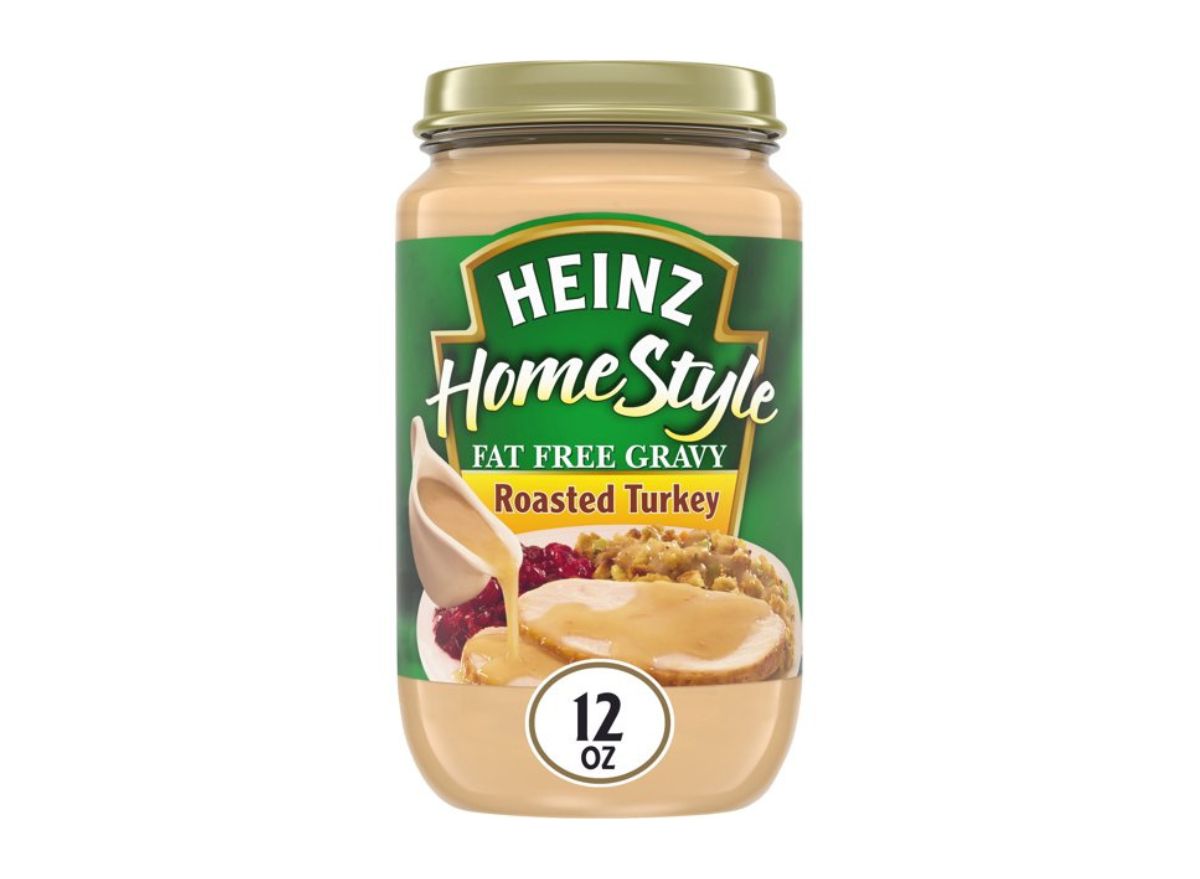 There are a few good things about this gravy—and a few not-so-good things, too. First of all, it has 13 fewer ingredients than its full-fat sibling. And when it comes to packaged food, fewer ingredients usually yield a more wholesome product. It's also lighter in calories, which is another bonus. But the bottom line is that the ingredients just aren't up to snuff. Crammed with powdered turkey meat (which just sounds gross), caramel color, and disodium guanylate (a chemical version of MSG that fuels the body's desire to continue eating), it's still a jar you're better off leaving on the shelf. 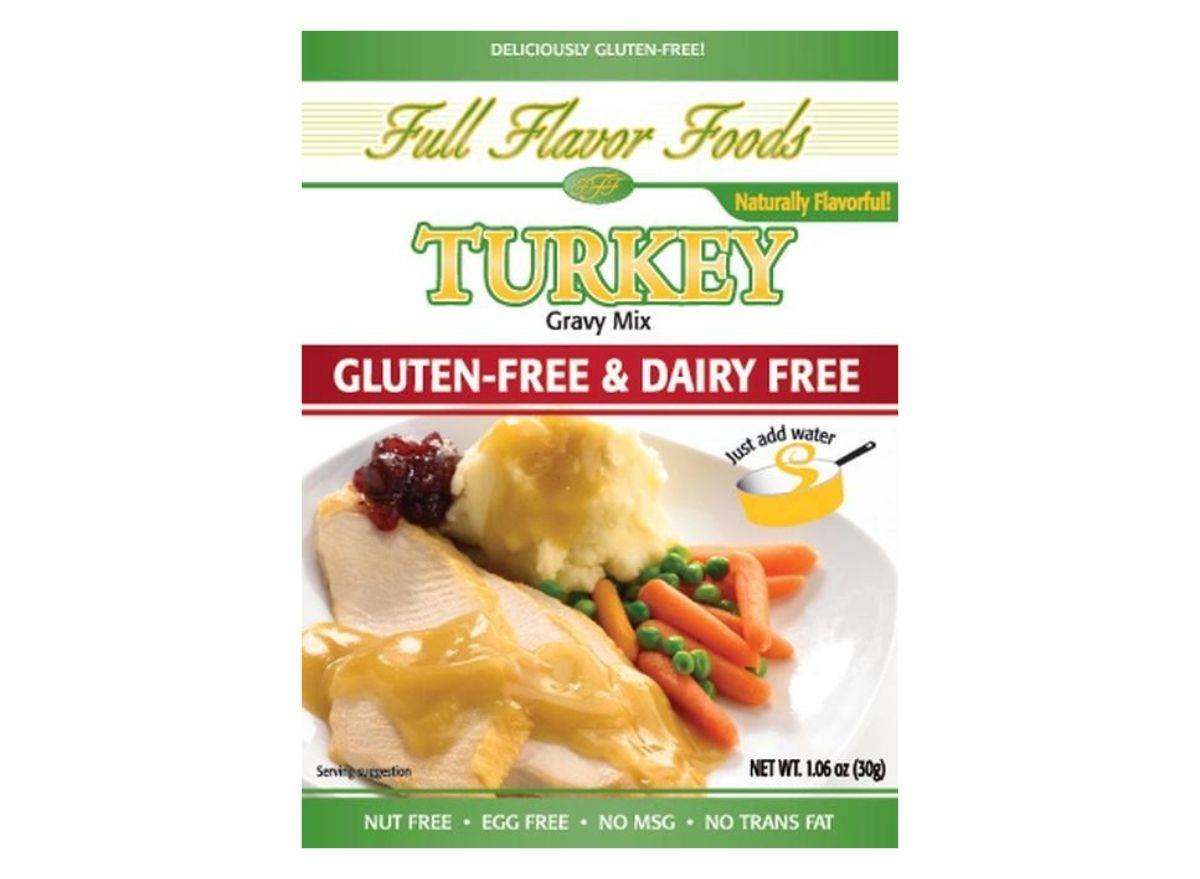 The MSG is the only thing holding this one back because otherwise this onion, turmeric, celery and black pepper-infused gravy mix isn't half bad. While we give Full Flavor Foods props for keeping additional scary ingredients from its recipe, it's not quite clean enough for us to give it the bright green light. 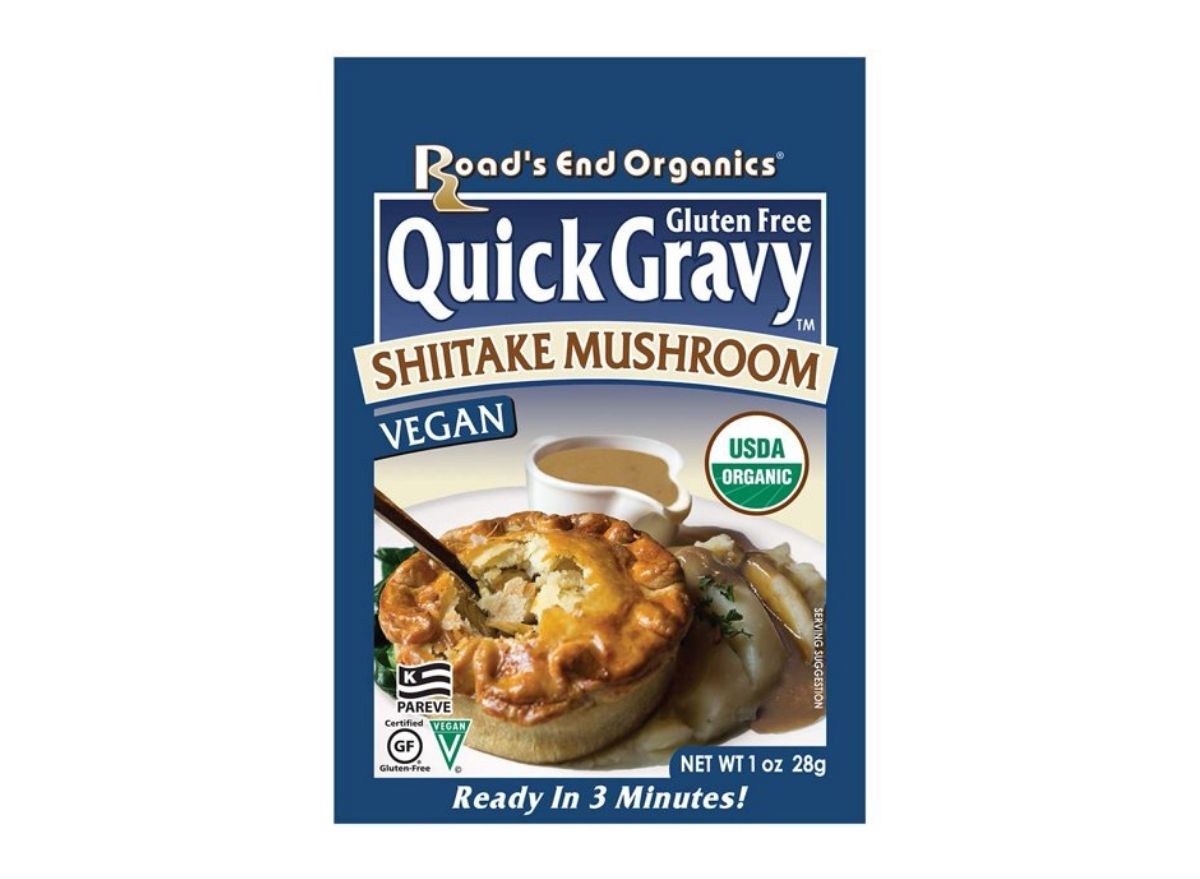 From the brown rice flour and tamari powder to the onions and shiitake mushrooms, nearly everything that goes into this packet is something you'd find in your own kitchen. 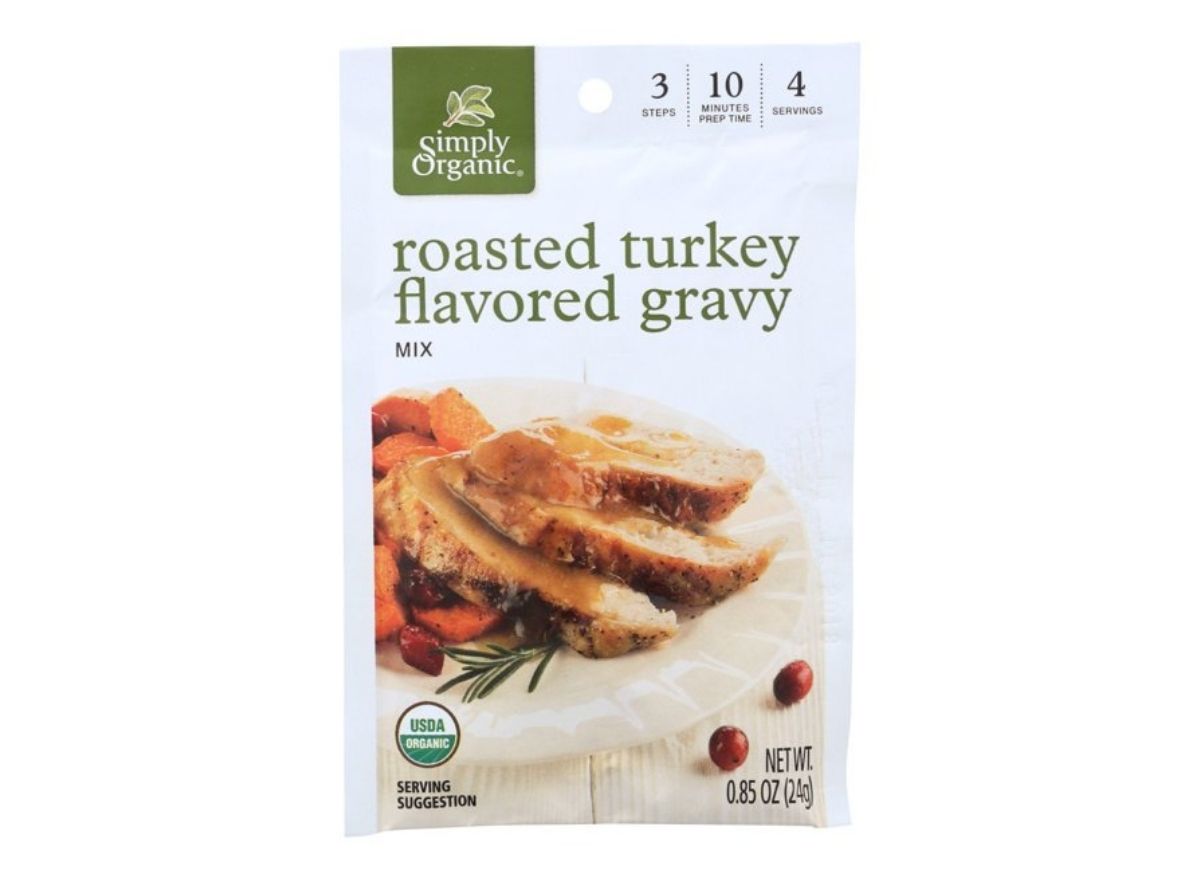 This product's fairly straightforward ingredient panel and relatively low salt content earn it a spot on our Eat This list. Another thing we love about this poultry topper? It's flavored with sage, black pepper, onion, and, of course, organic turkey and chicken, which creates a home-cooked taste we all crave around the holidays. 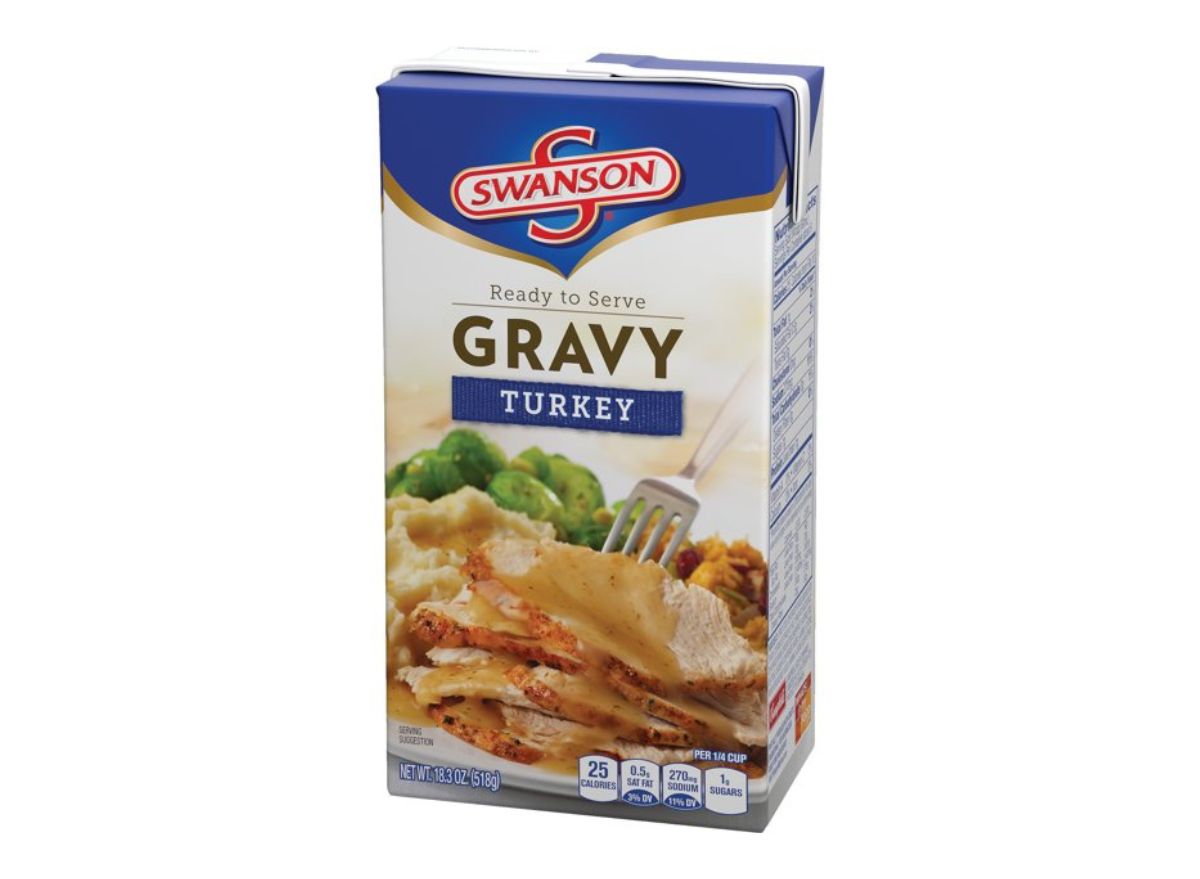 Relatively low in sodium and free of anything icky, Swanson's heat and eat turkey topper is a safe (and delicious) bet for your bird. The best part? It can be found everywhere from Amazon and Walmart to your local grocery store. 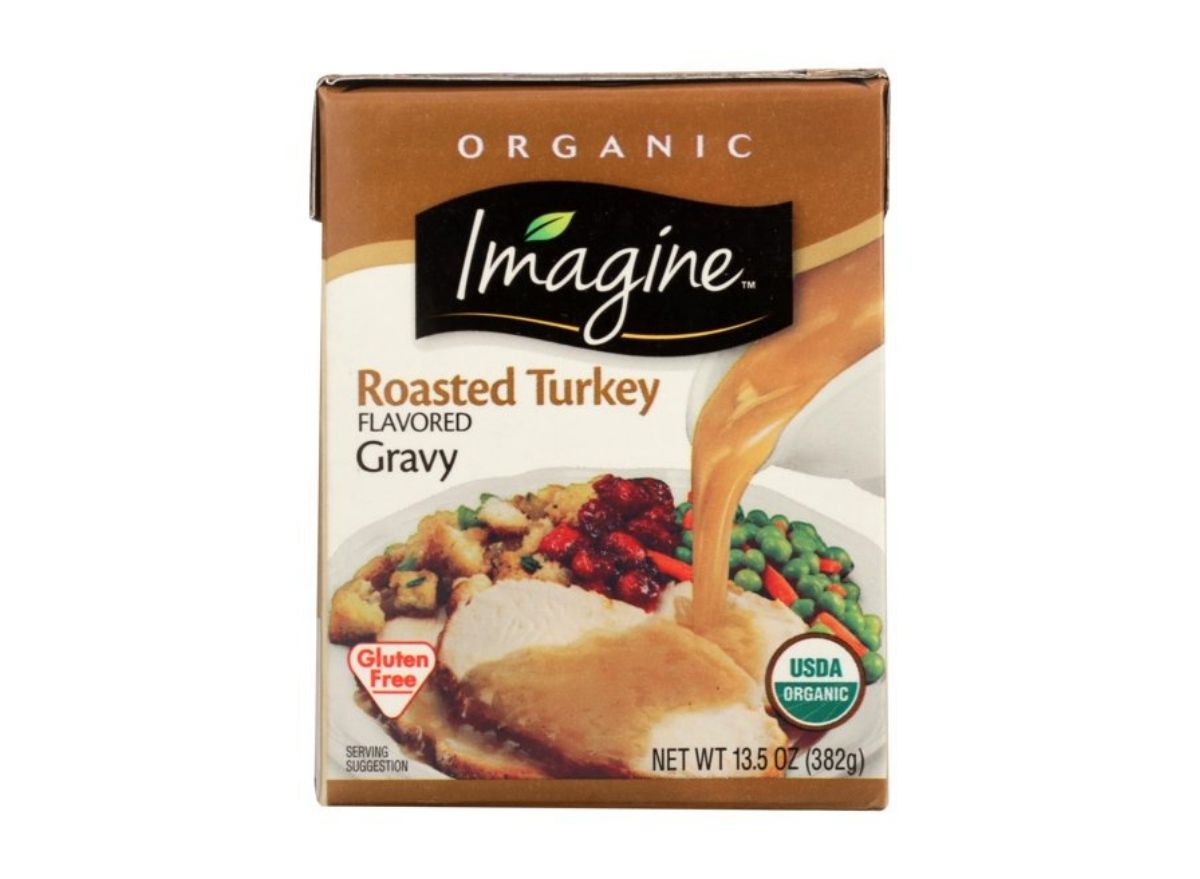 After digging through mounds of gravy cans, we can confidently assure you that this one has one of the lowest calorie counts we've ever seen. Its ingredients are top-notch, too, earning it the Eat This stamp of approval.

RELATED: 47 Healthy Thanksgiving Side Dish Recipes You Need To Make 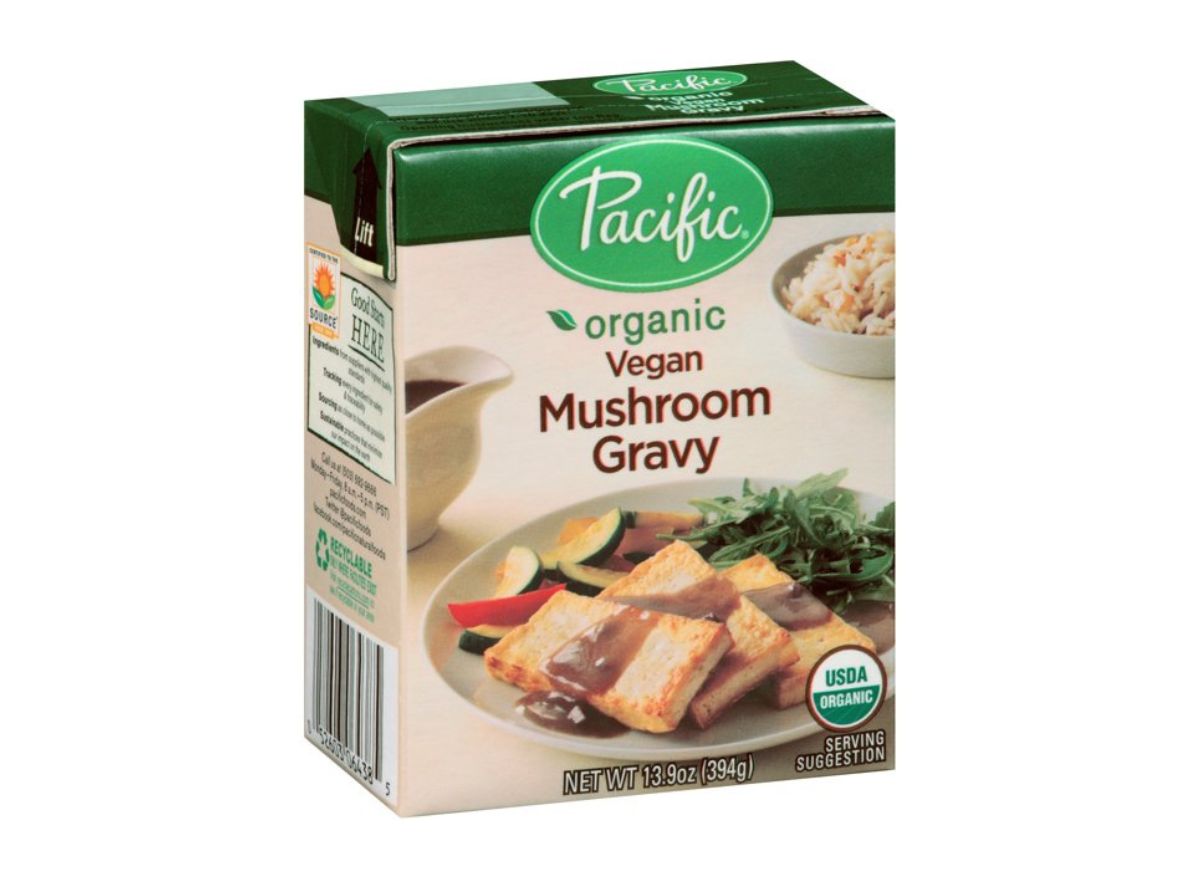 This low-sodium gravy is free of meat, which makes it great for turkey lovers and vegans alike. Made with mushrooms, rice flour, olive oil, veggies, spices, and almond butter (yes, almond butter!), this product is a clear winner in our eyes.

Brown rice flour joins together with sautéed mushrooms, soy sauce, and a plethora of flavorful seasonings to create this low-calorie, low-sodium flavor enhancer. There's nothing shady here, so go ahead and drizzle it on as liberally as you please. 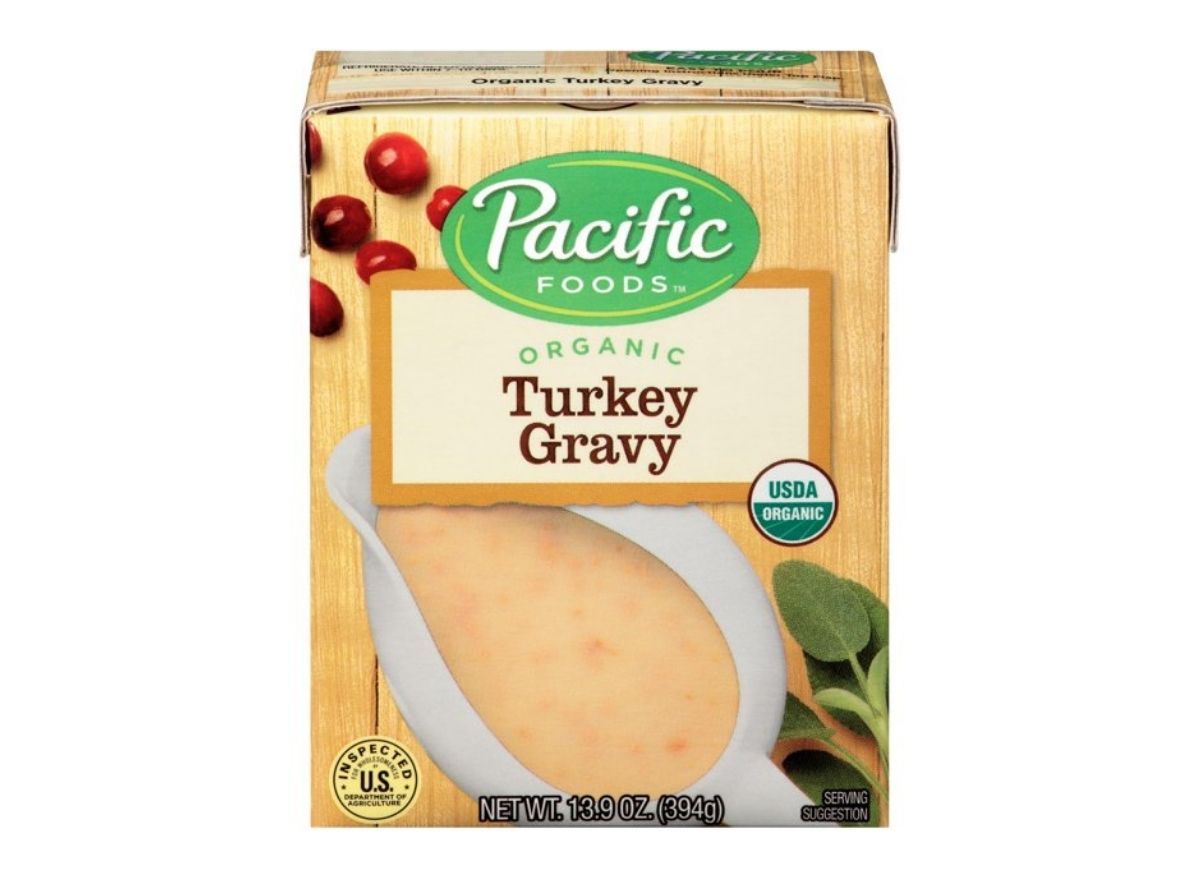 Made with turkey broth, flour, turkey fat, cream, sea salt, and rosemary extract, the ingredient panel of this ultra-clean gravy box reads nearly identical to dear old grandma's recipe. It may be more caloric than some other varieties, but the quality can't be beat. If you're worried about calories, don't be so heavy-handed with the pour.

Get more tips for a healthier Thanksgiving: