Whether you're sober, trying to cut back on booze, or just started a dry month, these non-alcoholic beers will deliver all the flavor but without the booze.

Non-alcoholic beers like O'Douls are nothing new. According to NPR, they first came onto the market in the 1980s. But with the rise of the sober curious trend in recent years, the market for NA beers has been booming. Sales of non-alcoholic beer are expected to surpass $25 billion by 2024, according to research firm Global Market Insights.

Why the rise in interest in non-alcoholic beer now despite its decades of slow growth? "In general, I think we're seeing non-alcoholic beer trending especially among millennials because of health and wellness reasons," says Amber Pankonin, MS, RD, LMNT, registered dietitian and owner of Stirlist.

And of course, "Dry January" is also a thing you hear floating around during the beginning of every new year. "During the month of January, I think we see non-alcoholic beer trending because of New Year's resolutions and the surge of Dry January, a campaign that encourages folks to give up alcohol during the month of January for health reasons," says Pankonin. Although, you can try a dry month any time of the year!

Whether you're interested in learning more about what non-alcoholic beer is, whether it's healthy, or if you want to just cut right to the chase to see a list of non-alcoholic beer, we have all the bases covered.

What exactly is non-alcoholic beer?

"Non-alcoholic beer is regular beer that has had the alcohol removed through a heating process and then had carbon dioxide added," says Keri Gans, MS, RDN, CDN, registered dietitian nutritionist and author of The Small Change Diet.

However, some alcohol may still be in there.

"Most brands still contain at least 0.5% alcohol by volume (ABV), so it might not necessarily be alcohol-free," says Pankonin. "However, some brands do claim to offer 0% ABV."

Going alcohol-free, or trying to drink less alcohol, are both noble health pursuits that could have health benefits.

There are a few reasons why someone may want to try non-alcoholic beer, according to Pankonin:

To determine whether drinking non-alcoholic beer is healthy, you need to assess your starting point. "The benefits of going dry only stem from what your relationship with alcohol was to begin with and how much or how little you were actually drinking," says Gans.

If you don't drink beer already, adding non-alcoholic beers to your diet isn't necessarily healthy. They're still a source of carbs and empty calories.

If you do currently drink beer, you may reap some benefits of switching to non-alcoholic beer. They're generally lower in calories than beer, which can help decrease your calorie intake and help with weight management. If you tend to drink more than a couple servings of alcohol per day, you'll also reap benefits of non-alcoholic beer. Too much alcohol can cause health damage, including to your liver and brain.

It's worth noting that you don't have to cut out alcohol completely to be healthy. "Alcohol actually comes with health benefits. For example, it may help decrease the risk for heart disease, stroke, and diabetes; but of course, moderation is key," says Gans.

13 of the best non-alcoholic beers worth trying

Not all NA beers are created equal, so it's important to read labels and make an informed decision. For the best non-alcoholic beers, "I would seek out brands that have no more than 100 calories per bottle," says Gans.

And if you're looking to go completely alcohol-free, be sure to read the label.

"I would suggest looking at ABV and making sure that if you want to go to completely alcohol-free that you purchase 0.0% ABV," says Pankonin. "Most non-alcoholic beers might still contain a small amount of alcohol. Also, because the alcohol has been removed, we often see those calories being replaced by carbohydrates. So overall calories might be lower or slightly lower in non-alcoholic options, but might have a higher carbohydrate content compared to those beers that contain alcohol," says Pankonin.

Here are 13 NA beers that you should give a shot. And while you're making healthier choices, be sure to check out: Eating Habits to Lose Abdominal Fat As You Age, Say Dietitians. 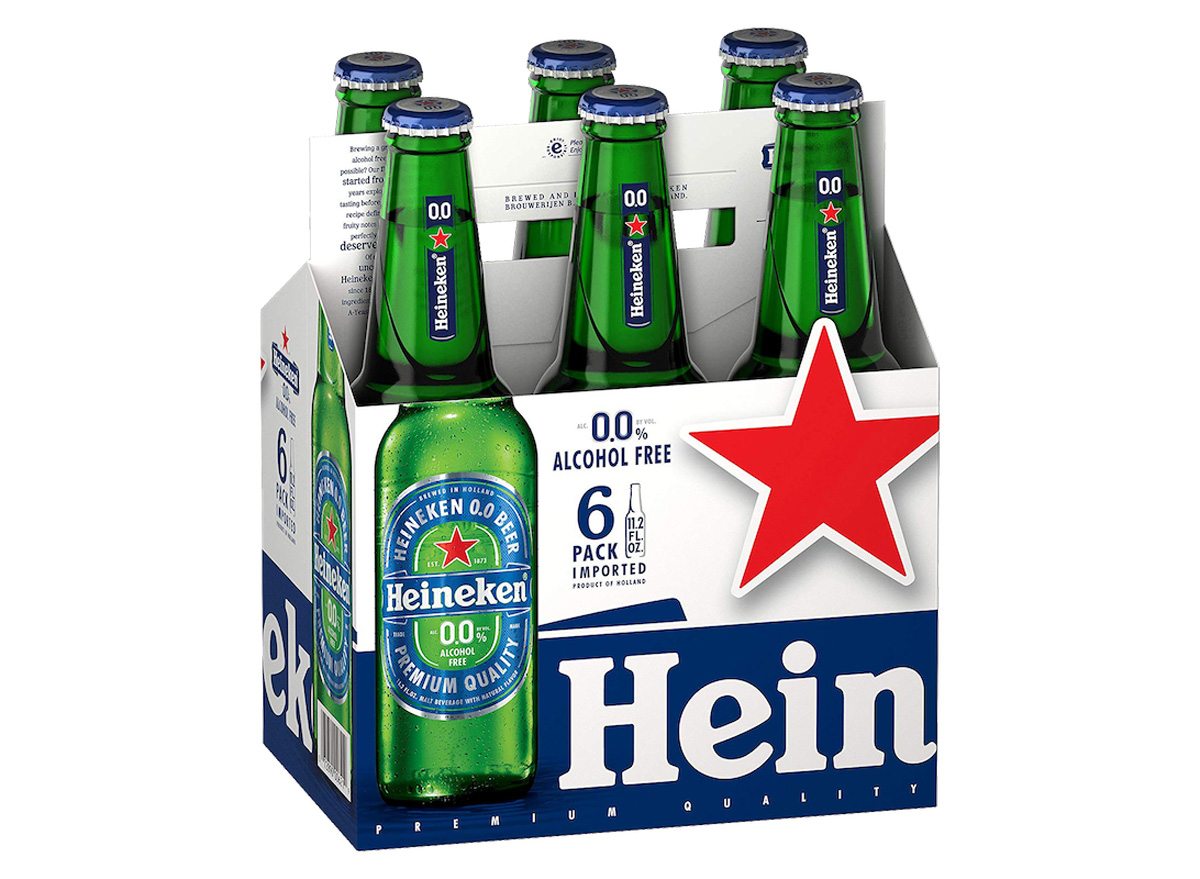 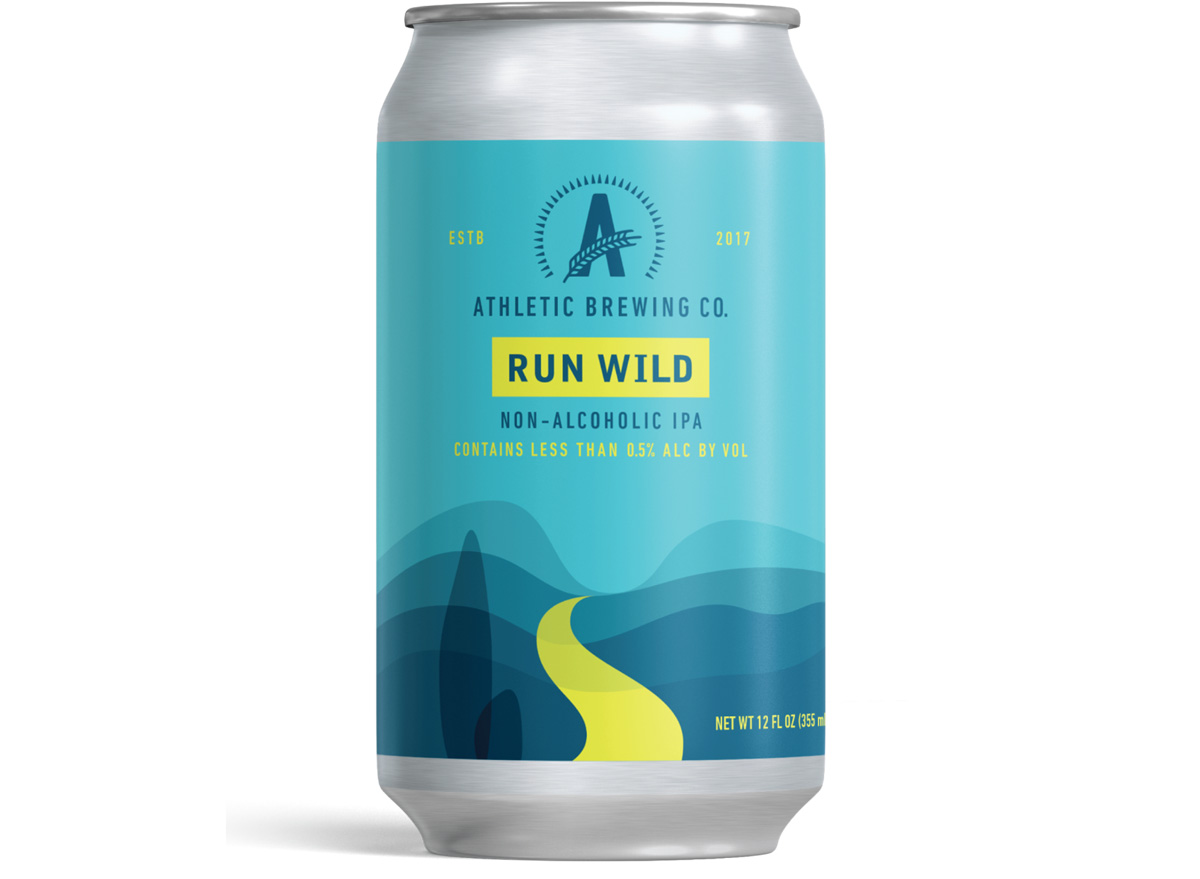 The Run WIld IPA is Athletic Brewing Company's best seller. It has less than 0.5% ABV, and only has 70 calories. Taste-wise, it's brewed with five Northwest hops and has "an approachable bitterness to balance the specialty malt body."6254a4d1642c605c54bf1cab17d50f1e 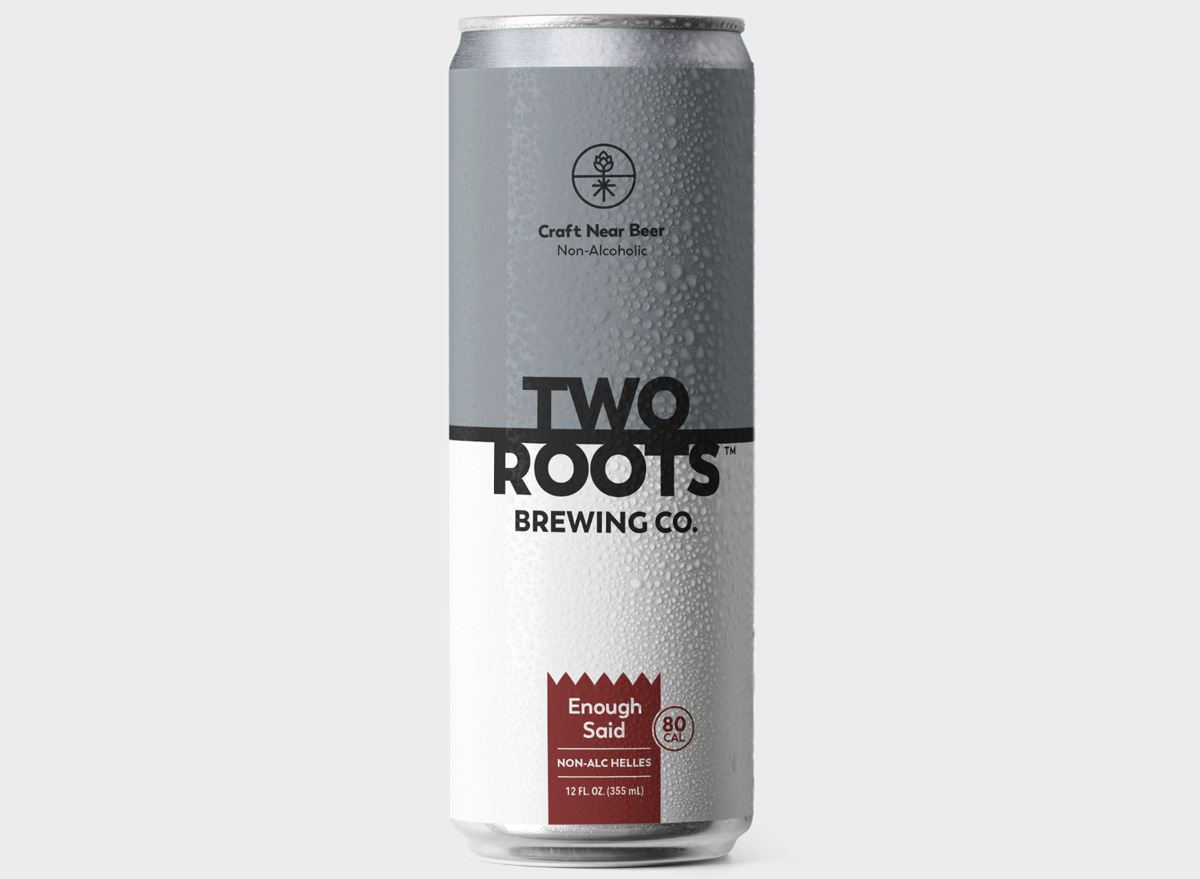 Two Roots Brewing CO. offers craft beer that is vitamin B12 fortified and filled with electrolytes. The "Enough Said" beer is a "golden non-alcoholic helles made with only Pilsner Malt and Hallertau Hops," and has 80 calories. 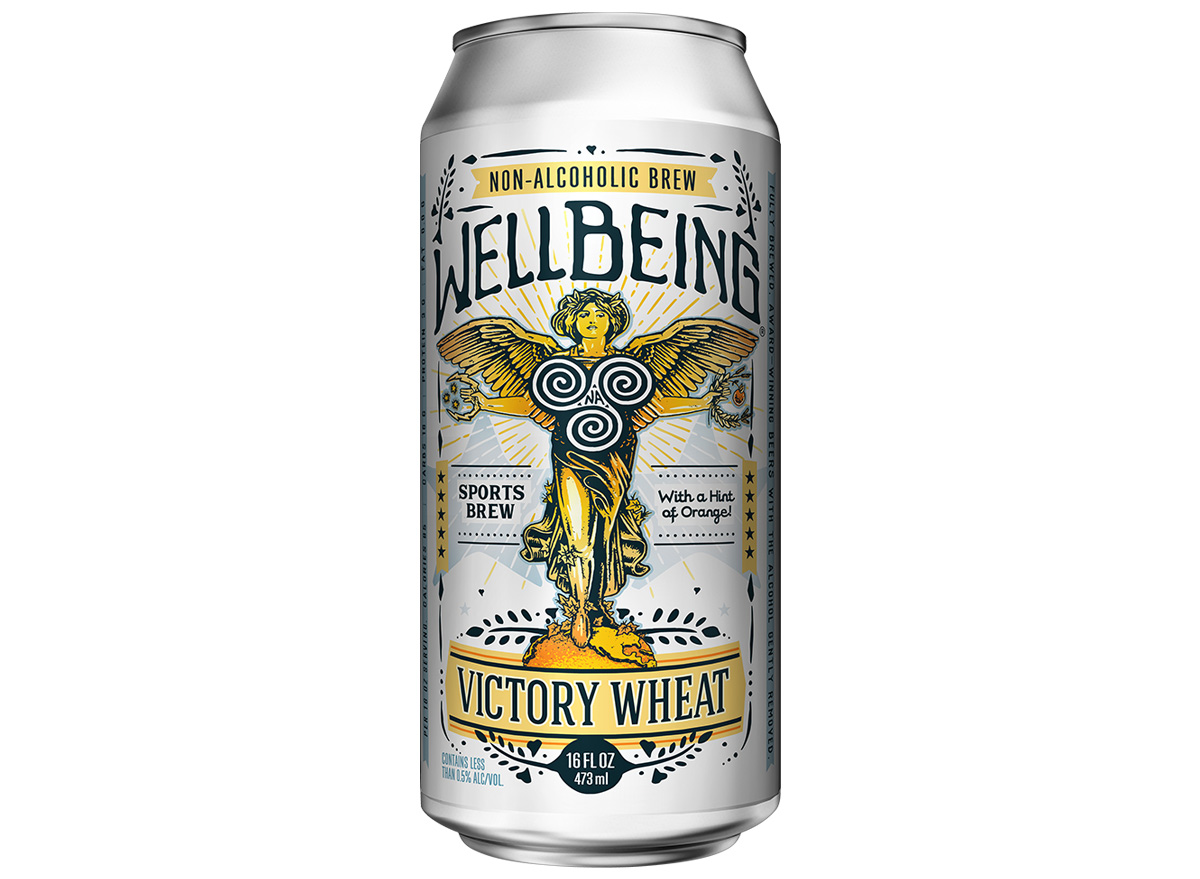 Wellbeing Brewing from Missouri stays true to its namesake: the Victory Citrus Wheat (brewed with orange zest) offers "a full spectrum of all-natural electrolytes, vitamins, protein, antioxidants, and anti-inflammatories." One can has 0.19% ABV and 85 calories. 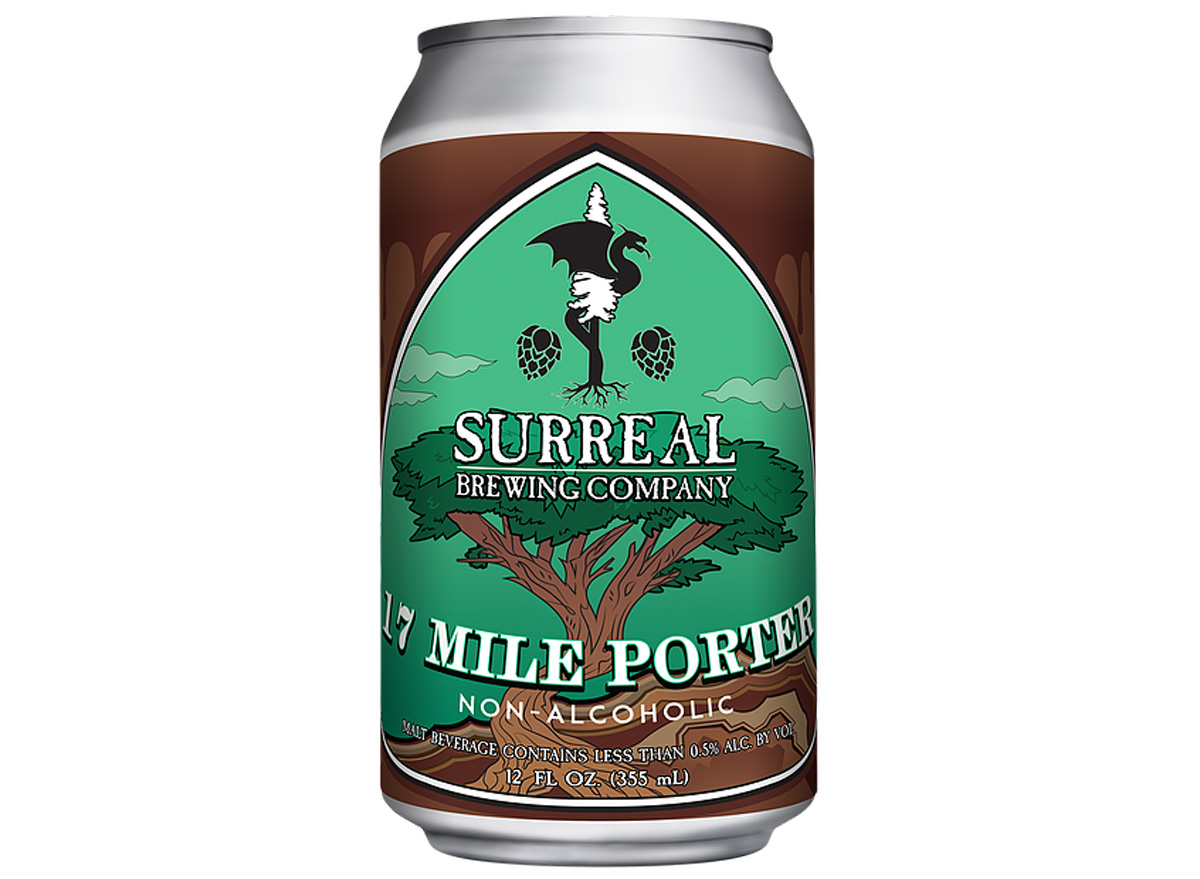 California-based Surreal Brewing Company specializes in all-natural, non-GMO, non-alcoholic craft beers. The recently released 17 Mile Porter is brewed with wholesome ingredients and is touted as a great recovery drink. One can contains less than 0.5% ABV and has only 50 calories. 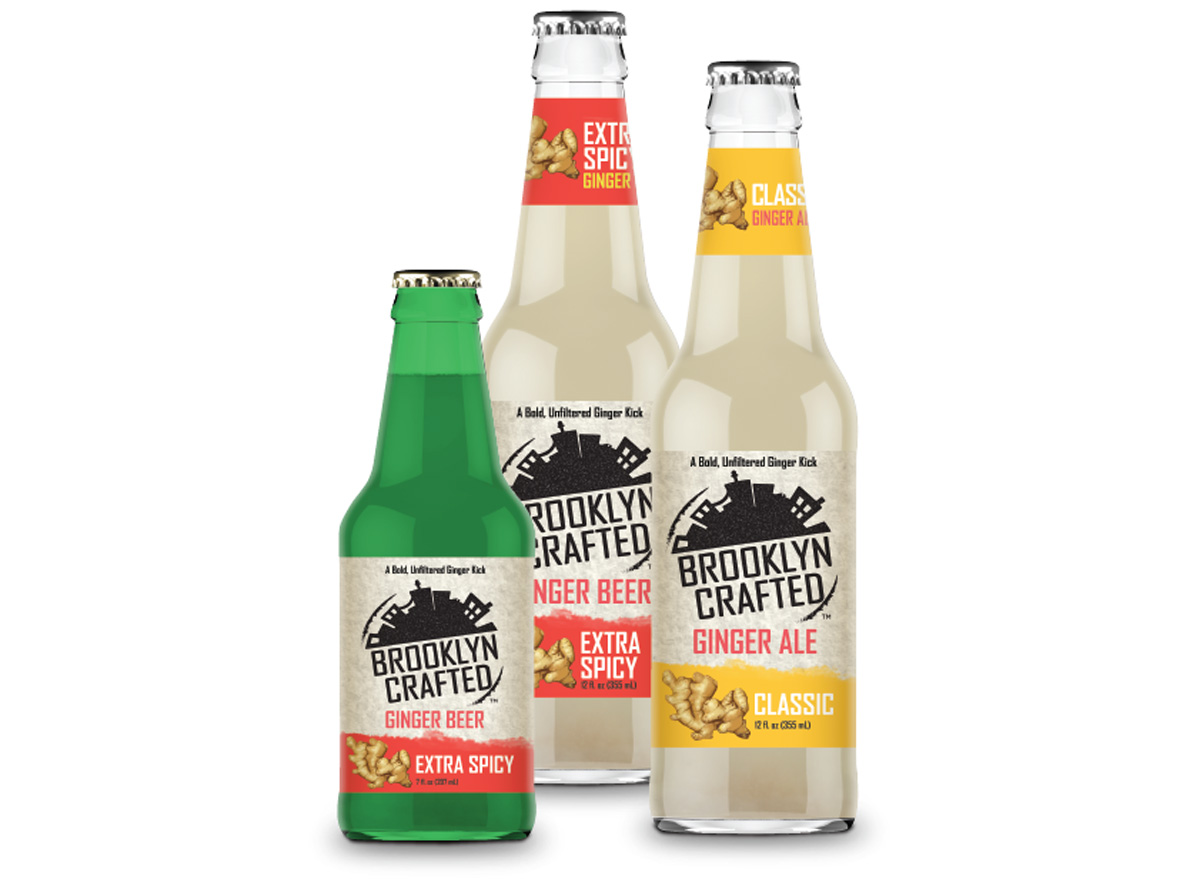 Brooklyn Crafted's non-alcoholic ginger beer is made with pure cane sugar and fresh, 100% unfiltered ginger pieces. It also features no artificial sweeteners, additives, or preservatives, and is both vegan and gluten-free. 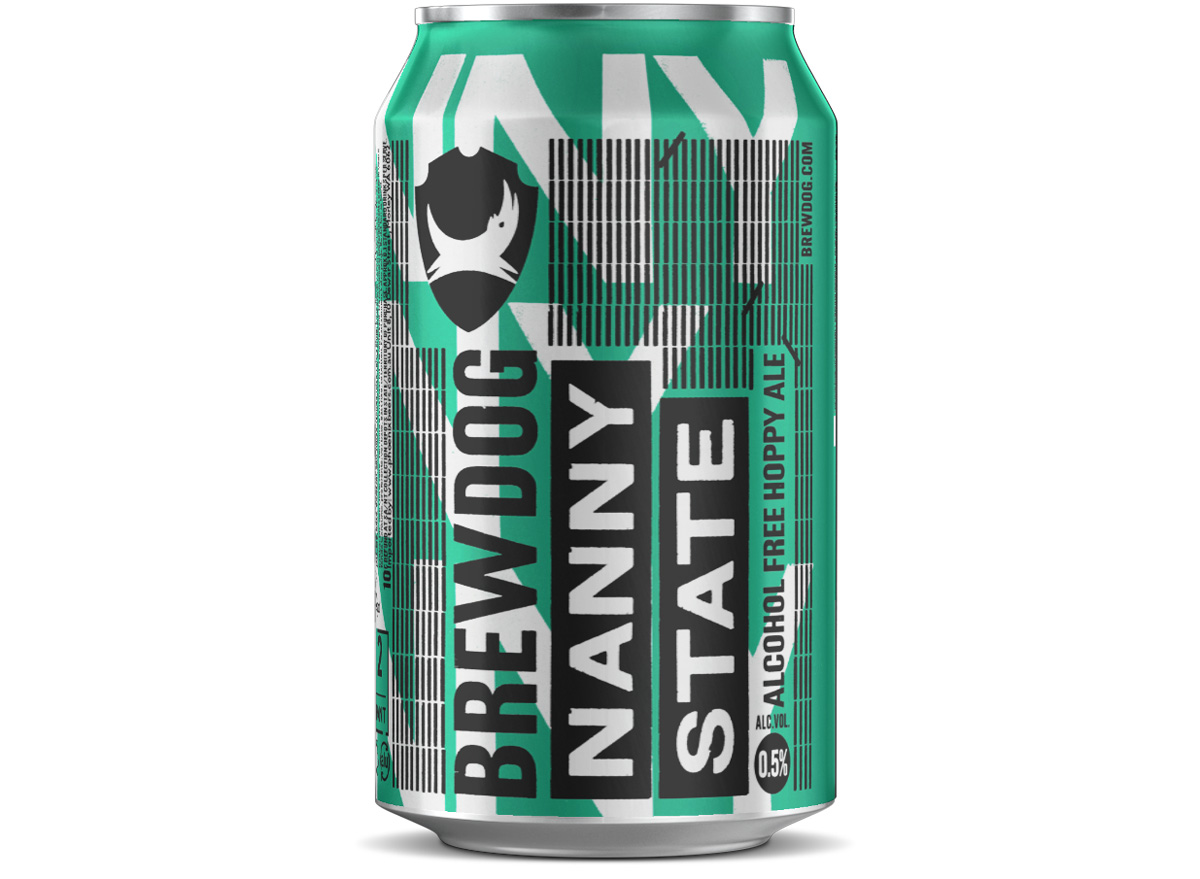 BrewDog's Nanny State is a pale ale with less than 0.5% ABV that's described as "bitter, hoppy and light", and only has 26 calories per serving. 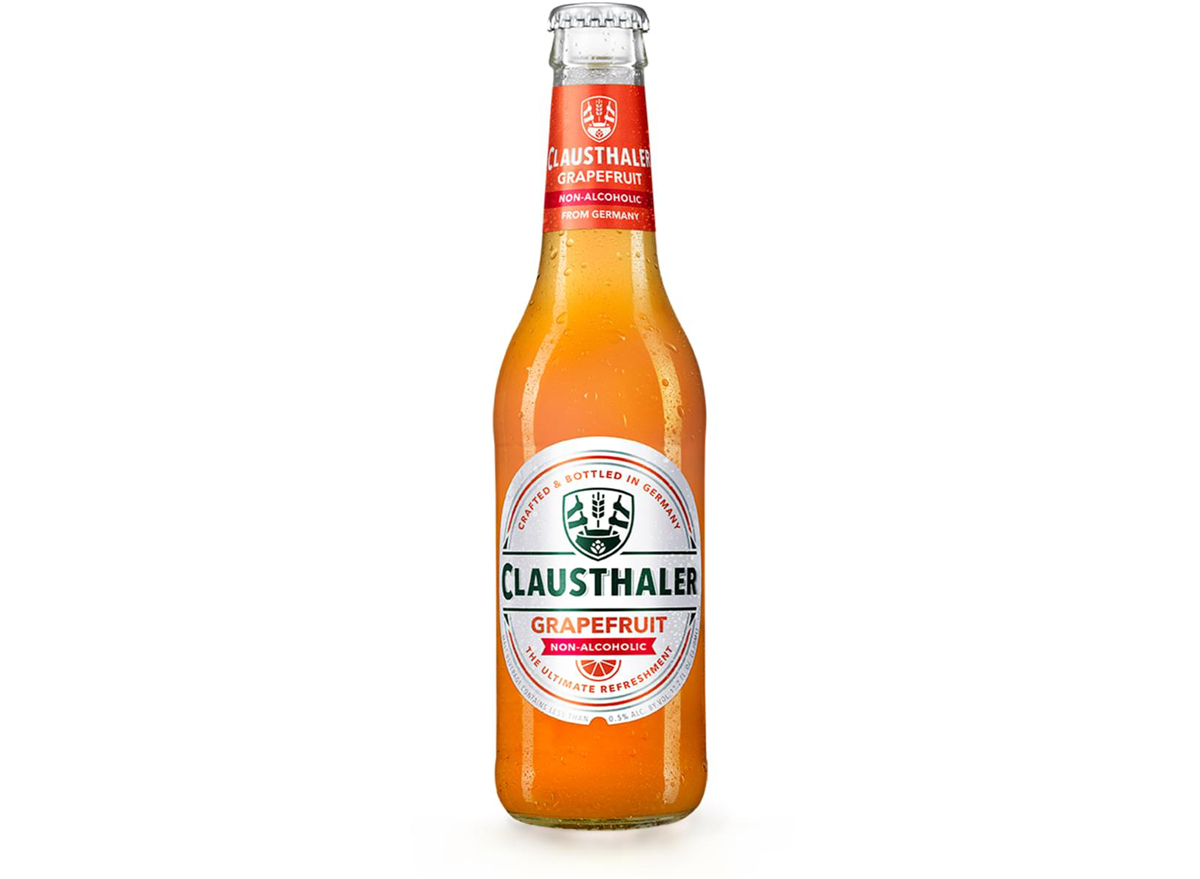 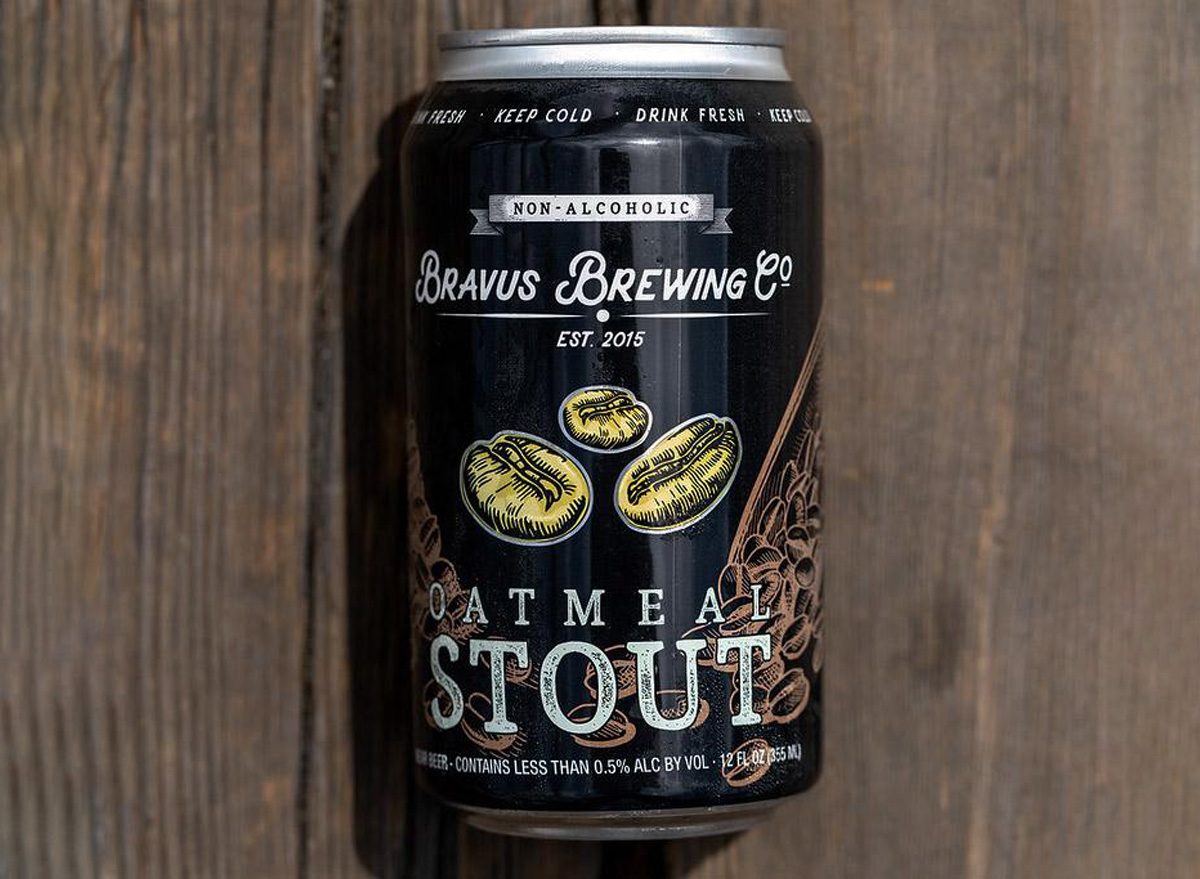 This super dark stout from California's Bravus Brewing Co. has hints of chocolate, caramel, and smoke for a super-rich taste. It's less than 0.5% ABV and one can has 110 calories. 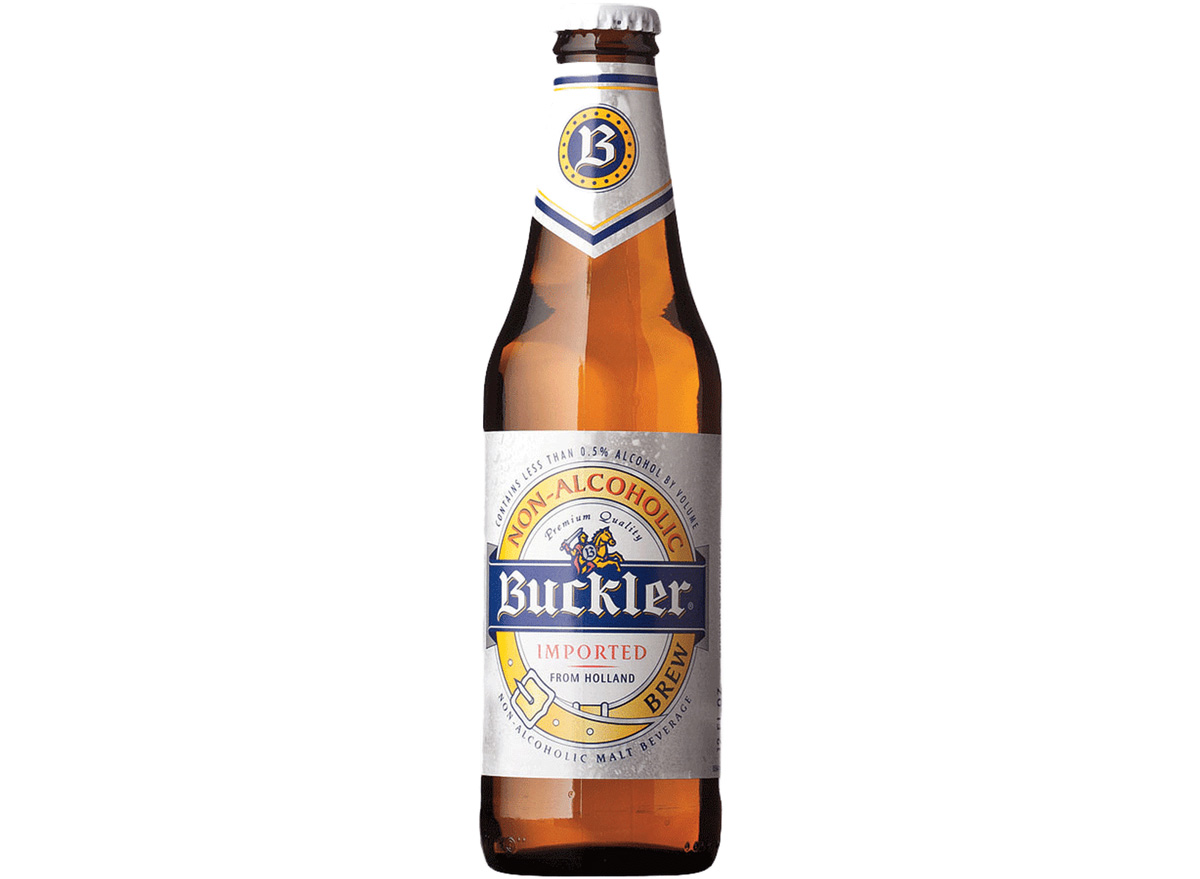 This pale lager from the Netherlands is described as a "sweet, grainy aroma with hints of lemongrass and husky corn," and has 80 calories per bottle. 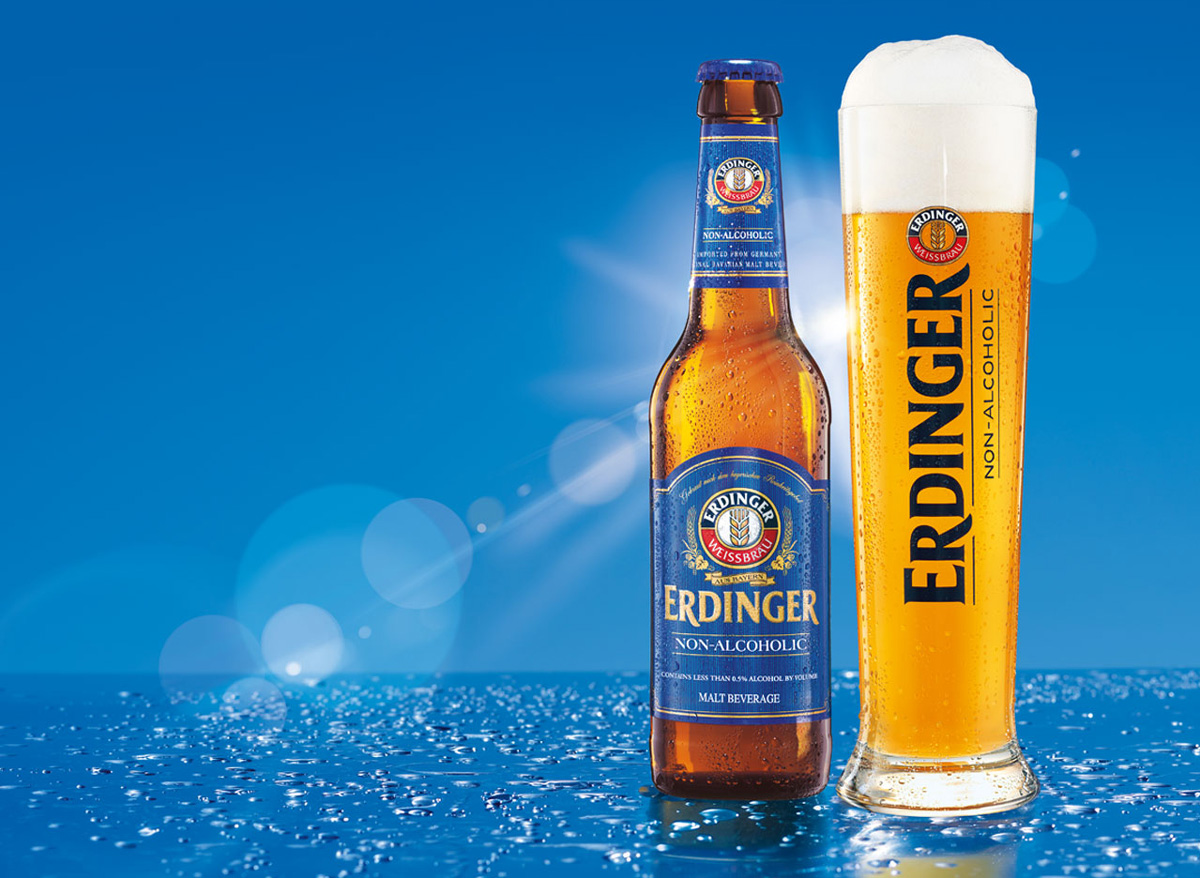 This NA beer from Germany is touted as an isotonic recovery drink that's loaded with vitamin B9 to help support a healthy metabolism and support your immune system. One bottle has less than 0.5% ABV and only has 82 calories. 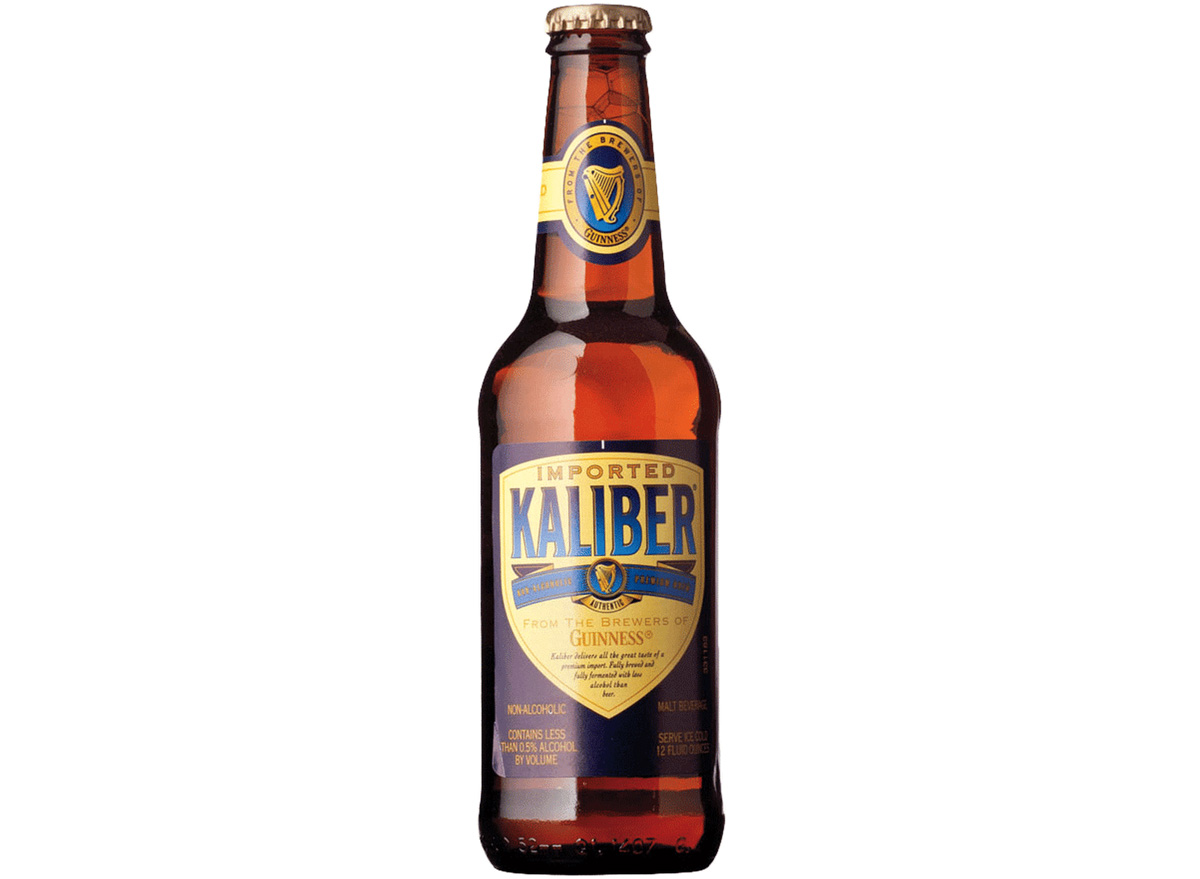 Kalibur is a European pale lager from the makers of Guinness, hailing from Ireland, and has "aromas of sweet grains, honey, caramel malts, and toasted bread." It has 0.5% ABV and has 66 calories per bottle. 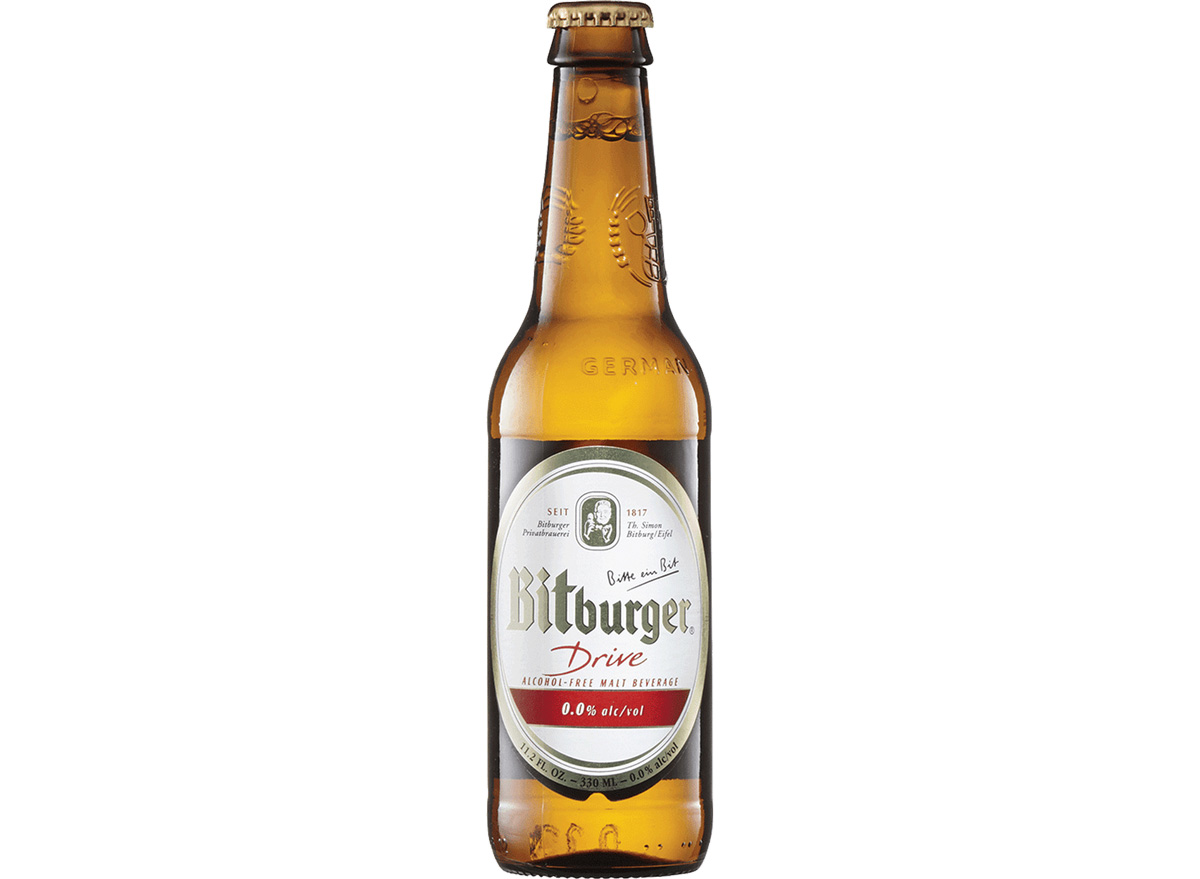 Germany's Bitburger Drive has 0.0% alcohol and is a fully-fermented lager with a super crips taste. One serving has about 92 calories per bottle.