We Tried 5 Frozen Turkey Burgers & This Is the Best

Time to change up your grilling choices this summer!

Remember when your only options for burgers were ham- or cheese? Yeah, it's unimaginable to us, too, as relic-like as those mythical "before the Internet" days. When it comes to summertime grilling now, there are a wealth of options. In beef alone, you can choose from different fat levels; various cuts; grass- or grain-fed; onions and cheese in the blend—the list goes on and on. Then there's chicken, salmon, bison, plant-based options, and of course, the gateway meat to this whole burger revolution: the turkey burger.

Invented by Cornell Corporation Board Member Robert C. Baker, whose other contributions toward modern-day staples include chicken nuggets (can you believe these didn't exist until 1963?!), turkey has become a go-to first step for those looking to take a healthier approach to their all-American diets. In fact, it was such a popular move that between 2015 and 2017, demand and consumption increased by 20% in limited-service restaurants!

Now, whether this is actually a healthier swap comes down to the patties you buy. Nutritionally, side by side, the turkey burger's profile isn't too far off from beef's—part of what's made it such a natural swap. Sure, you sacrifice a little protein, iron, and zinc from the red meat choice, but you get more B vitamins for energy metabolism, fewer calories per average serving in most cases, and less saturated fat.

That said, turkey burgers are a smart choice if you have a hard time processing red meat or prefer the taste of poultry, and—most importantly—want to bring home the good stuff. And this taste test is how we can help you do the latter.

We selected five widely available, national brand, all-white-meat varieties of simply seasoned low-fat frozen turkey patties and grilled them simultaneously on a countertop George Foreman grill. All were cook-from-frozen types for convenience, and we tried them first plain and hot, then with simple classic burger toppings like American cheese, ketchup, lettuce, tomato, and sliced red onion on multigrain rolls to see how they played with others.

Without further ado, let's talk some real turkey. And for more, be sure to check out: 22 Meals to Melt Belly Fat in 2022. 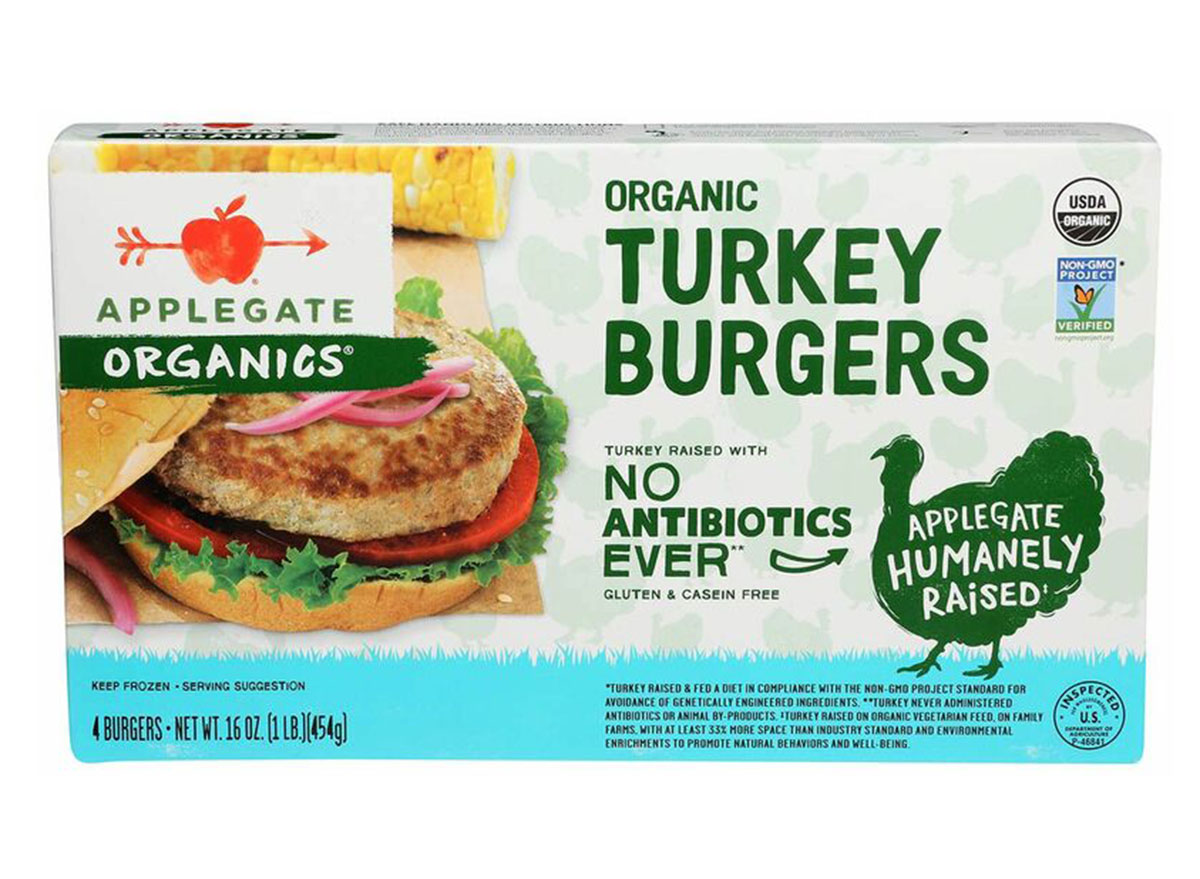 Humanely raised, certified organic, non-GMO, Whole30-approved, and vegetarian-fed, this salt-, gluten-, and casein-free turkey burger had a lot of fancy claims on the box. Plus, it had the least amount of calories per four-ounce serving. All of that added up to the most expensive per patty of the bunch.

First off, the box wasn't recloseable, which was an immediate detractor, and neither was the inner bag sealed. Not ideal! The dark pink patties were frozen between sheets of paper wraps and bore a striking similarity to the "pink sludge" its popular cousin, the nugget, was made of. But we all know appearances can be deceiving, so we threw it on the grill, to which it promptly stuck.

Cooked, the hue went from mauve to dark gray like imposter meat. It also became intensely tough to cut through. "This is a rubbery pancake," remarked one tester of the dense patty, an impression that wasn't helped by its bland flavor and a weird, artificial aftertaste that followed every chew. With toppings, a turkey-er flavor emerged, but a very gamey rendition that felt uncomfortable.

Overall, we recommend budgeting your hard-earned dollars and caloric limits toward any of our other selections, as this fell incredibly short of the rest of the competition. 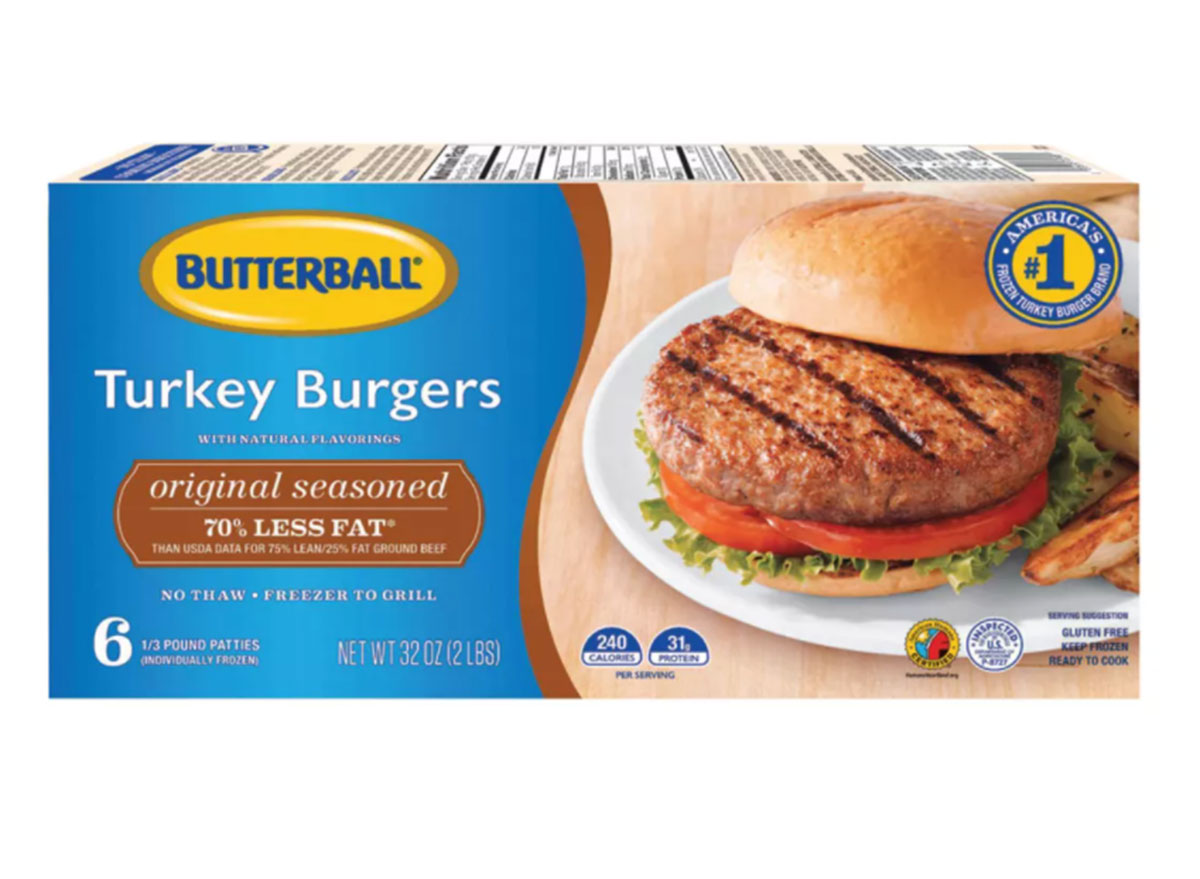 Fortunately, the "bad" burg streak ended right here, because it was all gravy, baby, starting with this iconic brand's basic recipe.

Butterball is the brand leader in retail sales, and after testing this burger, we don't begrudge this ranking one bit. The white meat-only lean turkey patties boast no nitrates, nitrites, gluten, or artificial ingredients. All they're made of is ground turkey, sea salt, and some other natural flavors, which we're suspecting may include celery—a common preservative in "cleaner" processed meat products—based on the little peek-a-boo of flavor we got from our first bite.

The patties come in two four-packs, formed in perfect, but disarmingly white rounds. These also stuck a bit to the grill but didn't lose too much moisture through the breaks. In fact, the burgers stayed very juicy. These were the most general "poultry"-tasting burger, starting out with the light flavor of ground white meat chicken and ending with a turkey one. Between bread and under some veggies, it was a neutral vehicle for all its accouterments. Only lightly salted, this is a rather clean choice that will please any palate and serves as a great base to build upon. 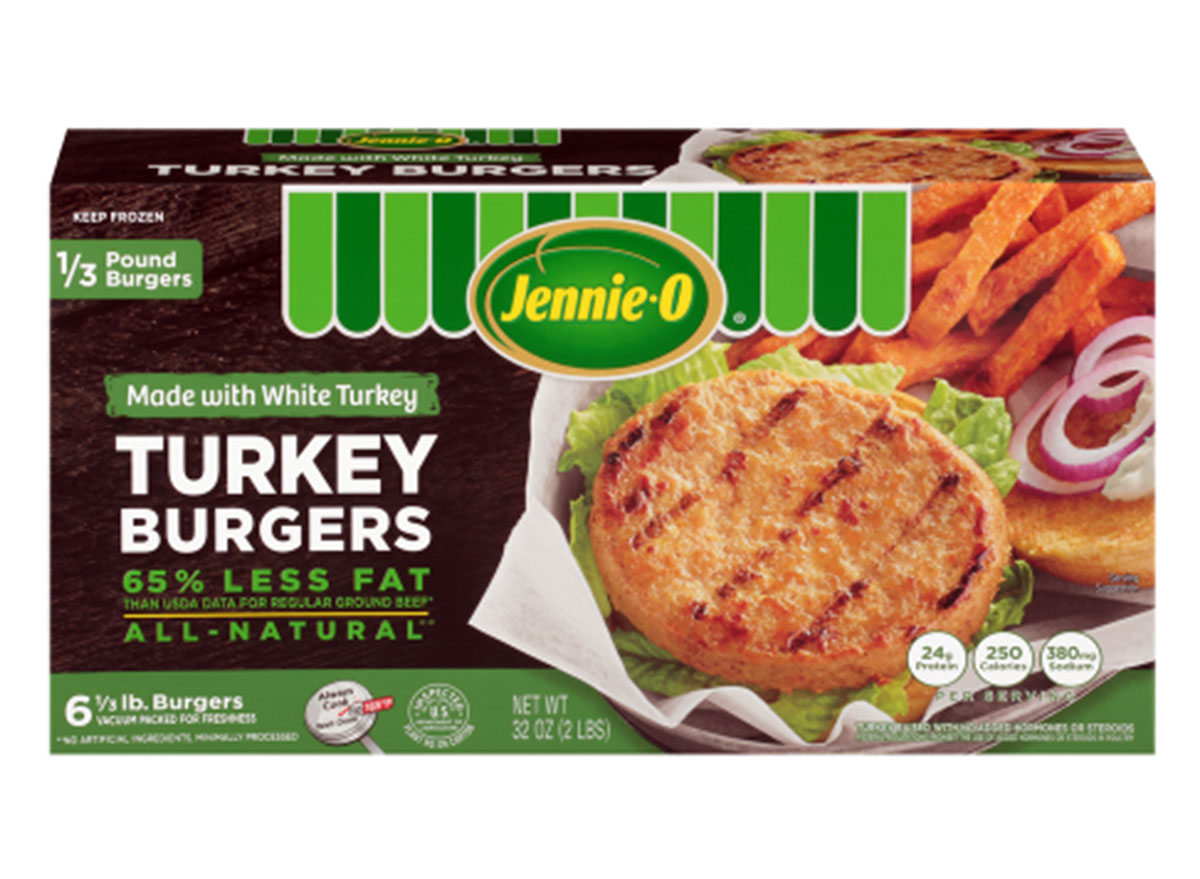 For those who feel that one burger is never quite enough and two may be too much, these ⅓-pound patties might just be their Goldilocks. The fact that the burgers are individually wrapped and sealed is also a huge plus; you're not committed to opening and eating more than you absolutely need.

Aside from weight, adding to their heftier feel is the fact that they're very dense—not overly so, like the Applegate, but enough that it feels substantial, necessitating more chew. The burgers do start off juicy when right off the grill but get drier faster than expected, which was good in that it forced us to slow down.

These tasted more like straight-up white meat turkey accented with little bursts of salt flecked through it. Although they were full-bodied and meaty, they weren't gamey, finishing without any lingering aftertaste. Additionally, they were more than willing to take a back seat to play well with others when turned into a burger, remaining remarkably sturdy for toppings and standing up well to them.

RELATED: We Tasted 9 Hummus Brands & This Is the Best One! 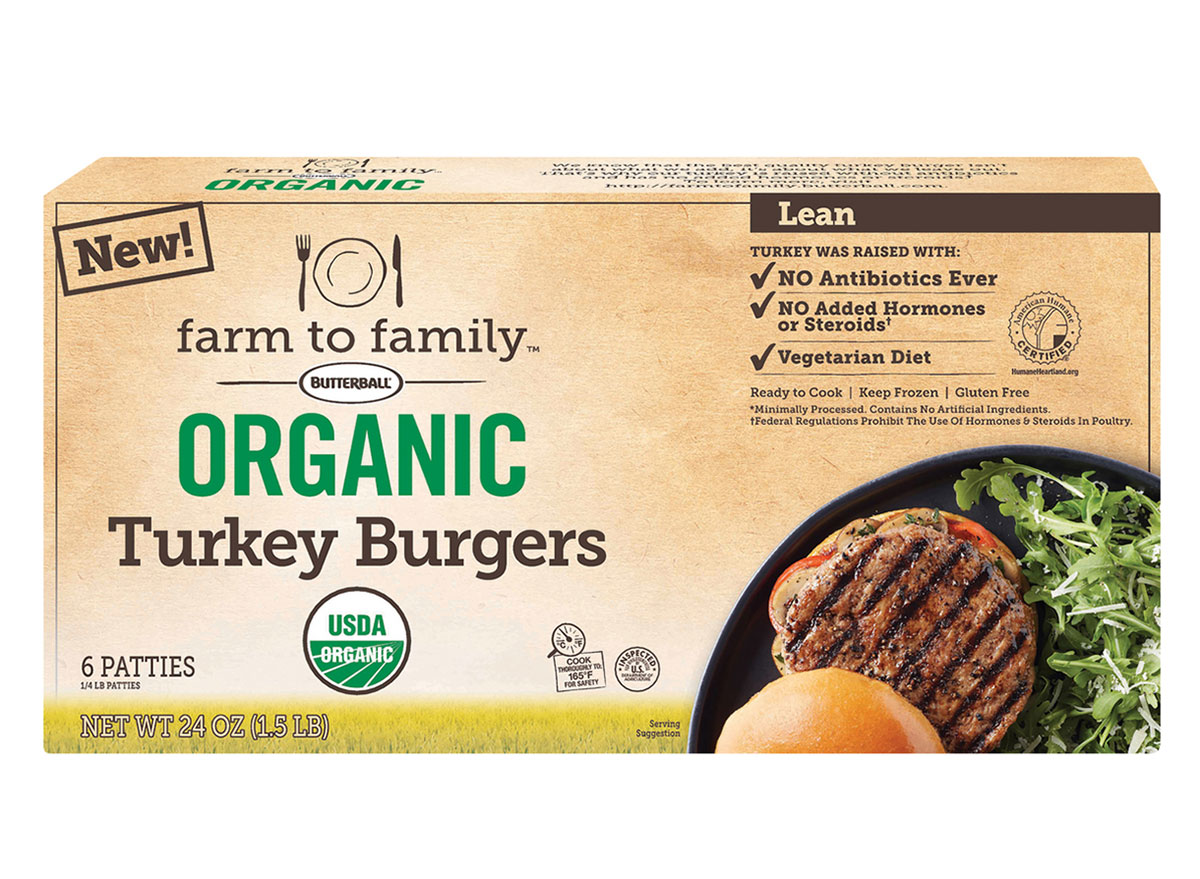 This new-to-the-lineup is the upgrade to the turkey giant's standard burger. They're made with all-white meat, accented only with sea salt, and disclose rosemary extract instead of just "natural flavoring." They're also enclosed in two easy-open four-packs, which is always a bonus. You'll notice the bright white meat has visible air pockets that indicate that it was more lightly pressed and therefore, wouldn't be tough.

This assumption proved to be true. The burgers offered a moist bite every time with great texture that crumbled in your mouth but not on the grill or before you started chewing. The overall flavor was, once more, closer to chicken than turkey, but distinguished itself with a more assertive saltiness. The meat itself was more neutral, however, with no gaminess at all. Nor did it leave any remaining shadows of turkey flavor to hang around and get sour in your mouth, as can sometimes happen with turkey. It became an immediately satiating sandwich that was seasoned just enough to hold its own against toppings and a bun without being forceful with its character.

RELATED: We Tasted 5 Greek Yogurts & This Is the Best 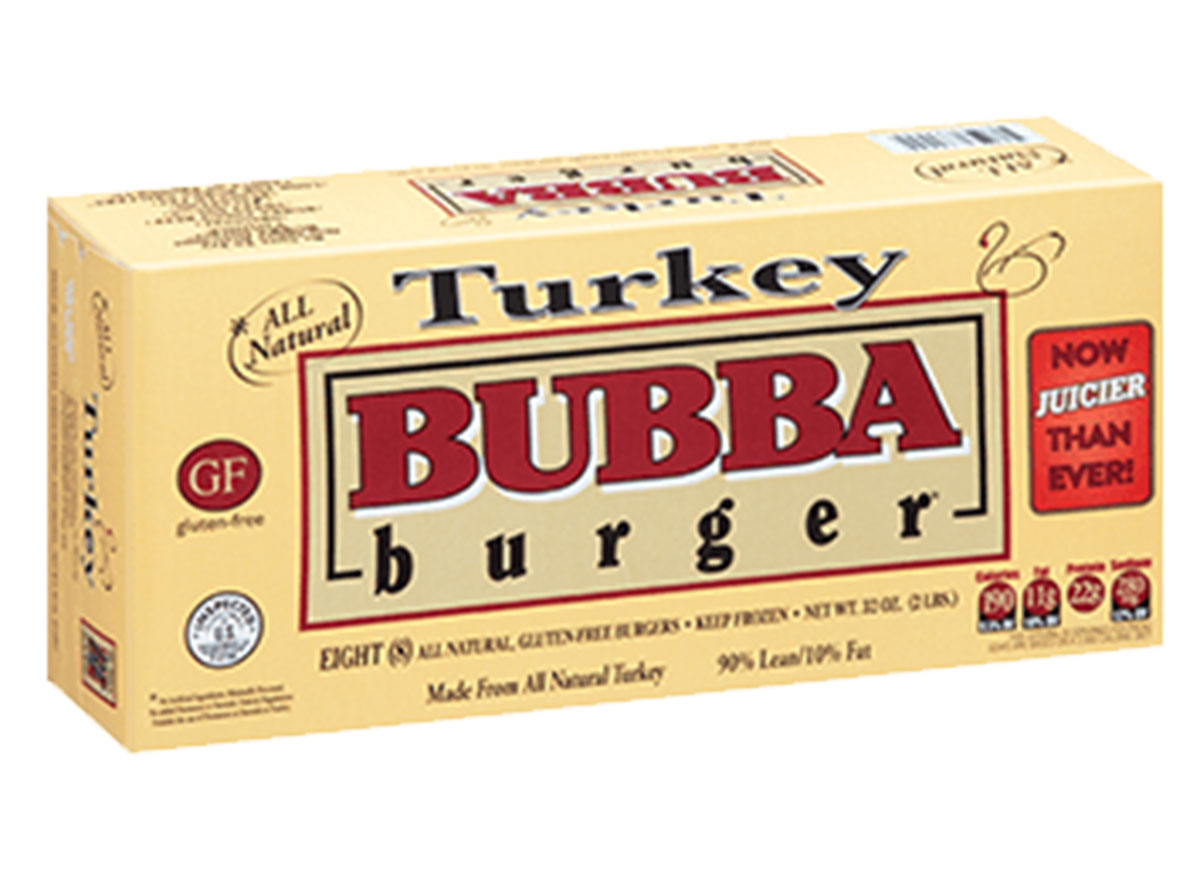 Even without the claim of being "juicier than ever" being announced on the box, we expected it to be so since it has the advantage of having 3% more fat than its competitors. And it was! And we say this with much surprise and delight since the outside of these irregularly-formed, amoeba-shaped burgers developed a grill mark-friendly crust sooner than the others. Because of this, we thought it'd reach well-done status too quickly, but these rosy-pink patties were protected by a thick, meaty density that kept the centers from losing too much liquid.

They were full-flavored and robust. Plus, the thick, heavy construction of the patties just invited us to pile on the toppings. What really set these apart is that they finished off with a sweetness that pleasantly persisted even after the bite was gone, with a richness that wasn't found in the other turkey burgers. For a toothsome texture, balanced flavor, and overall satisfying turkey burger that will feel like an option and not a sacrifice, this is the one to pick.

We Tasted 5 Chain Restaurant Burgers & This Is the Best

We Tasted 4 Plant-Based Burgers & This Was The Best

Su-Jit Lin
Su-Jit Lin is a food and lifestyle writer whose work has been featured in Real Simple, HuffPost, and more. Read more about Su-Jit
Filed Under
Burgers // Groceries // Grocery Shopping // taste test