There's a reason you can smell a Cinnabon from a mile away.

Bet you can't think of Cinnabon without having delicious, fluffy cinnamon rolls come to mind. For almost four decades, Cinnabon has been the king of cinnamon rolls. What started out as a shop in a Seattle mall in the 1980s has grown into a global brand with over 1,500 franchise locations in 45 countries. Cinnabon now exists as a household name—you've probably enjoyed one of the chain's treats while visiting an amusement park or have picked some Cinnabon up while shopping at your local mall.

However, Cinnabon isn't all sugar, spice, and everything nice. From baking with an ingredient that is made from algae to using a trick to attract customers into its stores, read ahead for some of Cinnabon's secrets they probably don't want you to know. And yes, there is a reason why there are so many Cinnabons in malls and airports.

Cinnabon uses a trick to lure customers in

No, you are not imagining it, you can smell the inside of a Cinnabon shop even before you open its doors. And there's a reason for it. According to the Wall Street Journal, Cinnabon uses scent as a strong marketing tool. In between baking batches of cinnamon rolls, store operators will heat baking sheets of brown sugar and cinnamon to keep the smell of freshly made rolls in the air longer.

In addition, the ovens are located at the front of the stores for a reason.  According to Mashed, they also instruct franchise owners to get the least effective over hoods legally required so that the scent permeates the space. Talk about smart marketing!

Cinnabon's Classic Roll has over 800 calories

Brace yourselves. Cinnabon's Classic Roll, which is probably the treat that people associate most with the popular chain, has a whopping 880 calories. Even more shocking is that this tasty dessert is also packed with 1150 milligrams of sodium, 37 grams of fat (16 grams saturated), 129 grams of carbs, and 61 grams of sugar! But, the worst offender is the Caramel Pecanbon with 1090 calories, 51 grams of fat (20 saturated) ,149 grams of carbs, and 77 grams of sugar! That's over three days' worth of recommended sugar for the average woman. P.S. that without an extra side of frosting which will add an additional 220+ calories and 23+grams of sugar.

RELATED: Subtle Signs Your Blood Sugar is Too High

They got into trouble with a tribute to Princess Leia

After Carrie Fisher passed away, Cinnabon posted a tribute to the actor drawn in cinnamon with an insensitive caption that read: "RIP Carrie Fisher, you'll always have the best buns in the galaxy." This was in reference to her iconic, cinnamon bun-like hairstyle in the original Star Wars. Fans on social media were offended by the apparent use of her untimely death to promote the company.

The secret ingredient isn't so much of a secret anymore

Replicating Cinnabon's cinnamon rolls from scratch at home may be difficult, but it can be done. This is because its secret ingredient is not so secret anymore. Perhaps unsurprisingly, Cinnabon's most precious ingredient is cinnamon—but not just any old cinnamon. The cinnamon the brand uses is called Makara, which is a very sweet cinnamon taken from cassia trees in Indonesia. According to Taste of Home, Cinnabon trademarked Makara cinnamon back in 1996. This means you can only buy this sweet spice that is perfect for home baking through the famous chain.6254a4d1642c605c54bf1cab17d50f1e

But the real 'secret' has never been revealed.

When Rich Komen called on recipe developer Jerilyn Brusseau to craft the perfect cinnamon roll for his Cinnabon concept, he required many things: The rolls needed to bake for half the time of traditional ones, the cinnamon needed to be perfect, and they needed to stand out. They got very close to perfection, but something was missing. " I started thinking about my grandmother," Brusseau told a radio station. "What would she have done? And the big idea came, and that was the day. That's Cinnabon's secret!" However, she will not reveal what that is.

One of its cinnamon roll ingredients is made from seaweed

One of the ingredients in Cinnabon's Classic Roll comes from a pretty unexpected source–seaweed. According to Mel Magazine, Cinnabon uses an ingredient called sodium alginate in its recipe. This natural polysaccharide is created from brown algae and is used in the food industry as a thickener and stabilizer. The more you know!

No, you don't have to track down a Cinnabon shop to enjoy one of its cinnamon rolls 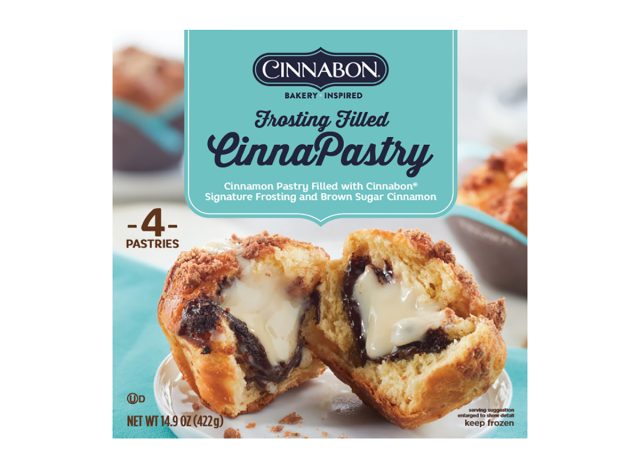 If you think you have to track down a Cinnabon shop every time you get a craving for one of its ooey-gooey frosted cinnamon rolls, then think again. Cinnabon now has a whole line of frozen items available at your local Walmart. The best part is that the beloved brand offers so much more than just cinnamon rolls—you can expect other fun creations including Frosting Filled CinnaPastry and CinnaBiscuit Chicken Sandwiches, right in your frozen food section, too.

If you realized you've never come across a standalone Cinnabon shop before, then you are not alone. This is because Cinnabon is usually found stationed only in crowded areas, such as malls, amusement parks, and airports. According to Mashed, Cinnabon does this so they can be located in high foot traffic areas where people are guaranteed to be, which all comes back to that irresistible smell…