What's Really in Cool Whip Will Shock You

Cool Whip, as in whipped cream, right? Not quite. Skim milk is only the fifth ingredient in this topping.

Move aside swan pool floats; Cool Whip is summer's hottest accessory. Whether it's paired with a peach blueberry crumble, jello, pie (or even in pie) this chilled topping complements almost every summer treat. And although you ceremoniously grab a tub of this topping before every barbeque, have you ever taken a second to think what exactly this container is full of? We break it down below.

Kraft Cool Whip's first ingredient is water, followed by hydrogenated vegetable oil, high fructose corn syrup, corn syrup, and — finally — skim milk. From its name, you would think that the cream part of this "whipped topping" would appear higher on the list. Alas, Cool Whip is mostly just syrupy oil.

In fact, when it first debuted in stores in 1966, Cool Whip was actually a dairy-free product! Kraft only started adding skimmed milk and light cream in 2010.

Beyond skim milk, Cool Whip contains less than 2 percent of light cream; sodium caseinate (protein derived from milk); natural and artificial flavor; emulsifiers which include xanthan and guar gums, Polysorbate 60, and sorbitan monostearate; sodium polyphosphate (another emulsifier whose main component, phosphate, has been linked to chronic kidney disease and weak bones when found in high levels in the blood, according to Kidney Research UK); and beta carotene (a vitamin that adds color). Is this starting to sound less than appetizing yet? 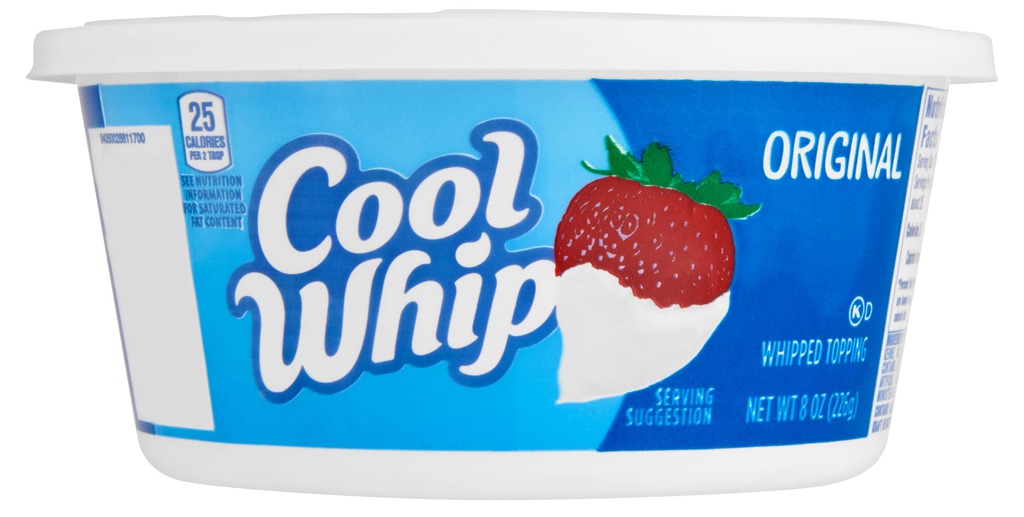 This topping's nutritionals shows you it's mostly just fat and sugar. But it's interesting to compare it to Reddi wip. You know, the red-capped cannister of real whipped cream? You may assume that because Cool Whip has less dairy, it would be a lower-calorie alternative. But you'd be wrong. Take a look below:

Opting for the real whipped stuff will actually save you 10 calories, 0.5 grams of fat and 1 whole gram of saturated fat, as well as 1 gram of sugar. What's more, you'll also be consuming a product whose first ingredient is cream — not water — and is free of high fructose corn syrup, hydrogenated oils, and artificial ingredients.

That being said, Reddi-wip doesn't quite hold up to whipping your own heavy cream at home. Reddi-wip contains mono- and diglycerides, which Isabel Smith, MS, RD, CDN, and founder of Isabel Smith Nutrition, tells us are considered to be a class of trans fats that have escaped FDA classification as trans fat, and are therefore not included in the trans fat ban. "Avoid them anytime you're able to!" Smith advises.

Although Kraft is the most common store-bought brand, you should also be checking the ingredients of any generic "whipped" topping out there. And if you need a substitute for Cool Whip, look no further than real whipped cream! No blender? No problem: Place a small Mason jar in the freezer for 15 minutes, pull it out, add a cup of heavy cream, a tablespoon of sugar, and shake! You'll have a freshly whipped topping — and toned arms.

Olivia Tarantino
Olivia Tarantino is the Managing Editor of Eat This, Not That!, specializing in nutrition, health, and food product coverage. Read more about Olivia
Filed Under
Dessert // Food & Nutrition // Foods To Avoid