These wacky breakfast cereals are gone, but not forgotten.

Once considered fabulous and healthy breakfast foods, cereals back in the day were typically loaded with sugar and colors that didn't even exist on Newton's color spectrum. Of course, the crazier the cereal, the more kiddos loved them. And while there are still plenty of sugary breakfast cereals on grocery store shelves and in pantries across America, many old brands fizzled and disappeared. But they still have a cult following, and some of these cereal boxes are pricy collector's items—unopened with the cereal still inside. Read on to discover (or remember!) nine discontinued breakfast cereal brands we can't believe ever existed.

The "O" stood for oats and the "K" was for Kellogg's—and OK's was Kellogg's answer to Cheerio's. Big Otis the Scotsman was the mascot in 1959 and 1960, reaching out to "lads and lassies" to urge their parents to buy the cereal. Why a Scot? Apparently to make a connection between Scotland and oats. Let's just say Yogi Bear got the A-Ok to take over as mascot before the cereal ended its run around 1962.

Ralston was the brainchild of Cecil the grumpy robot, this cereal's mascot who would spit out (or vomit) boxes of the happy face-shaped cereal whenever he was made to laugh by four goofballs: Grins, Smiles, Giggles, and Laughs. The cereal debuted in the '70s but it was no laughing matter—it didn't last long in the cereal aisle.

Nerds in cereal form just wasn't popular. The small, tangy, crunchy, sugary cereal even tried to be gimmicky to win the popularity contest in the cereal aisle—the Nerd cereal box included two separate flavor pouches, orange/cherry and strawberry/grape, which was thought of as a cool, novel packaging idea. But this cereal debuted on cereal shelves in 1985 and was discontinued about a year later.

Marketed as the cereal option with more vitamins and iron and less sugar, Quaker Oats King Vitaman corn and oat cereal brand ruled for many years, debuting in 1968. It was officially dethroned in 2019. To be honest, we don't remember this one even though it was still being sold until several years ago, so we're amazed it lasted that long.

Gimmicky at its best, the hot pink Breakfast with Barbie cereal box transformed into a girlie vanity. In fact, the cereal was marketed directly to parents of daughters. The cereal debuted in 1989, and claimed to have less sugar than some of its 1989 competitors, and also "natural fruit flavors," "wholesome grains," and cereal pieces shaped like hearts, stars, and cars.

Mr. T was the first licensed ready-to-eat cereal manufactured and marketed by the Quaker Oats Company in 1984, piggybacking on wrestler Mr. T's popularity in The A-Team and Rocky III. "Team up with Mr. T, It's cool!" and "I pity the fool who don't eat my cereal!" were the slogans for this sweet corn and oat cereal shaped in the letter 'T'. It was a big hit in the '80s before it was ultimately pinned and defeated.

This cereal boasted that it contained 10 percent real juice—as if that was a good thing! The cereal box featured cattleman O.J. Joe, who loved to lasso oranges, and his grab line was "wholesome goodness of real orange juice." Kellogg's introduced it in 1985, touting that it had the equivalent vitamin C of a 4 oz glass of orange juice. But Kellogg's didn't squeeze much success out of the cereal—it soured after about a year.

RELATED: This Beloved 1990s Cereal Is Coming Back to Grocery Store Shelves 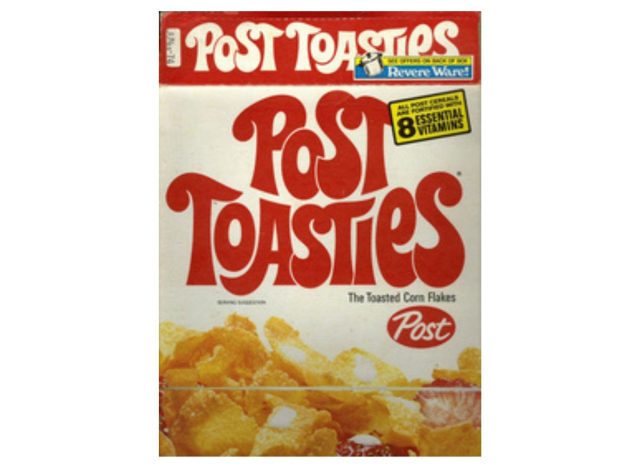 This corn flakes cereal goes way back. To 1904, to be exact. Biblical Prophet Elijah was featured on the box, sitting on a rock feeding the cereal to a raven.

But, apparently, ministers and church groups weren't overjoyed about Elijah, the cereal's mascot. And "Cerealizing America" quotes C.W. Post, who was not too happy about the protesting against his new cereal: "Perhaps no one should eat angel food cake, enjoy Adam's ale, live in St. Paul, nor work for Bethlehem Steel…one should have his Adam's apple removed and never again name a child for the good people of the Bible."

Ultimately, the cereal was renamed Post Toasties in 1908, and eventually, Mickey Mouse replaced the Prophet on the box.