These are the science-backed side effects of eating the country's most iconic fast food burger regularly—and they're not pretty.

Eating a Big Mac sandwich from McDonald's every day for years may have absolutely no measurable negative impact on you—save for some special sauce on your shirt—if you consider Don Gorske as proof of the pudding. The 65-year-old from Fon du Lac, Wisconsin, has attacked at least one Big Mac every day since 1972, consuming more than 30,000. His 28,788th earned him a Guinness Book of Records title in 2018.

Gorske, who is 6 foot 2 and weighs 195 pounds claims he's in good health and has even supplied his medical records to newspapers as proof of his healthy cholesterol levels, well below the recommended 200.

Another Big Mac aficionado made news a few years back for losing 7 pounds after eating a Big Mac a day for 30 straight days. The personal trainer says he was trying to make the point that there's no such thing as a "bad food" if you live a healthy lifestyle.

Obviously, these gents are anomalies. Dozens of studies have strongly linked the consumption of fast food to weight gain, obesity, and obesity-related diseases. The Centers for Disease Control and Prevention estimates that one-third of Americans eat fast food every day, and it's not likely a coincidence that 72% of Americans are overweight and over one third are considered medically obese.

"When you eat unhealthy foods like these you reduce your ability to enjoy life in the moment due to increased fatigue, low-grade health complaints, obesity, depression and more," says Mark Hyman, MD, Head of Strategy and Innovation of the Cleveland Clinic Center for Functional Medicine and a 13-time New York Times bestselling author. Plus, "the costs of medical visits, co-pays, prescription medications, and other health service skyrocket."

"If you only consume processed or fast food very occasionally, your risk of adverse effects is low," says Jessica Cording, MS, RD, CDN, INHC, author of The Little Book of Game-Changers: 50 Healthy Habits For Managing Stress & Anxiety. But what happens when you make it a regular habit like those anomalies above—and 33 percent of all Americans? In all likelihood, what we detail just beyond. And while we may be a bit harsh on the Big Mac here, by no means is this iconic fast food burger the worst thing you can consume. Take a gander at the 20 Shocking Foods With More Calories and Fat Than a Big Mac.

Dietary fiber not only keeps cholesterol in check, making your heart plumbing run clear, it keeps you regular. Since a Big Mac delivers just 3 grams of fiber per serving, eating a regular diet of the sandwich and its sidekick fries may plug up your digestive plumbing. The same goes for the 15 Foods That Make You Constipated.

You may become overweight

There are worse foods to order at McDonald's (stay clear of the Double Bacon Smokehouse Burger at 1,130 calories, 27 grams of saturated fat, and 3 grams of trans fats), but the Big Mac still weighs in at a hefty 550 calories. And if you do as most folks do, pair it with a large fry and large regular Coke, you've just elevated your meal into the stratosphere at 1,350 calories. That's half of the government recommended daily calories for middle-age adults—2,600 for moderately active men and 2,000 for moderately active women. "That kind of high-calorie intake can lead to obesity, which puts you at risk for developing chronic diseases," warns Jim White, RD, ACSM, owner of Jim White Fitness & Nutrition Studios.

Your veins may narrow

Even one fatty fast food meal can have an immediate impact on your arteries, according to a small study published in the Journal of the American College of Cardiology. Researchers monitored 14 healthy adults after they ate a high-fat meal containing the amount of fat roughly equivalent to a Big Mac: large fries and a large milkshake. Three hours after participants ate the meal, researchers tested their endothelium, the inner lining of their blood vessels, to determine its ability to expand and increase blood flow. They found that subjects' blood vessels were less flexible after the meal than before the meal, suggesting that even one fast food meal can cause arteries to become stiffer. Speaking of milkshakes, if you want to reduce your fat intake, you'll want to avoid the 21 Unhealthiest Restaurant Milkshakes.

Your blood pressure will likely go up

If you put a blood pressure cuff when you sat down to eat a Big Mac, you'd probably see a jump in your blood pressure reading after finishing the meal, suggests a study in the Journal of Nutrition. In the study, researchers from the University of Calgary in Canada measured blood pressure readings and found they increased 1.25 to 1.5 times higher in subjects who ate just one high-fat meal and underwent a standard stress test compared to subjects who ate a low-fat meal. If you have high blood pressure, consider trying the DASH diet, officially called the Dietary Approaches to Stop Hypertension Eating Plan, developed by researchers at the National Institute of Health's National Heart, Lung, and Blood Institute.

The special sauce may make you fat

Big Mac's "special sauce" is delicious. Some might even call it addictive. One of the things that makes it so enticing is the high fructose corn syrup (HFCS) that's used in the relish, which many studies indicate can lead to insulin resistance, obesity, type 2 diabetes, and high blood pressure if eaten regularly. Only your liver cells can process this sweetie. "Fructose goes straight to your liver and starts a fat production factory," says Hyman. "It triggers the production of triglycerides, cholesterol, and increases metabolic disturbances that drive increases in appetite, weight gain, diabetes, heart disease cancer, dementia and more." Special sauce isn't the only food causing you to gain weight in your midsection, there are also these 13 Foods You Didn't Realize Are Causing Belly Fat.

The special sauce may punch holes in your gut

Satisfying an occasional Big Mac attack won't do that. But daily? In addition to all the other HFCS-laded foods and drinks that you're consuming every day? High doses of HFCS "can punch little holes in intestinal lining causing what we call a 'leaky gut' allowing foreign food proteins and bacterial proteins to enter your bloodstream," says Hyman. That triggers the inflammation that we know is at the root of obesity, diabetes, cancer, heart disease and, even non-alcoholic fatty liver disease, he says.

If you order a Big Mac Combo Meal (that's with a medium fry and medium Coke), you'll swallow 1,375 mg of sodium. Not only will you still be thirsty after that Coke, you'll be nearly at the ideal limit of 1,500 milligrams per day recommended by The American Heart Association. Plus, you're more likely to experience belly bloat.6254a4d1642c605c54bf1cab17d50f1e

It may make your asthma worse

Eating fast food burgers three or more times per week was associated with a 39% increase in the risk of severe asthma in adolescents, plus an elevated risk of severe eczema and rhinoconjunctivitis, according to the Asian Pacific Society of Respirology. By contrast, eating fruit three or more times a week reduced the prevalence of severe asthma in adolescence by 11% and 14% in younger children, the Australian researchers found.

You may develop depression

The pro-inflammatory saturated fats, carbohydrates, and cholesterol in abundance in fast foods like the Big Mac have been linked to clinical depression. Researchers from Manchester Metropolitan University's Bioscience Research Center analyzed data from 11 studies encompassing more than 100,000 people and found that eating the typical fast-food diet makes you around 40% more likely to develop depression, according to their report in Clinical Nutrition. "These results have tremendous clinical potential for the treatment of depression, and if it holds true, other diseases such as Alzheimer's, which also have an underlying inflammatory component," said lead researcher Dr. Steven Bradburn. "Simply changing what we eat may be a cheaper alternative to pharmacological interventions, which often come with side-effects."

You may be ingesting chemical toxins 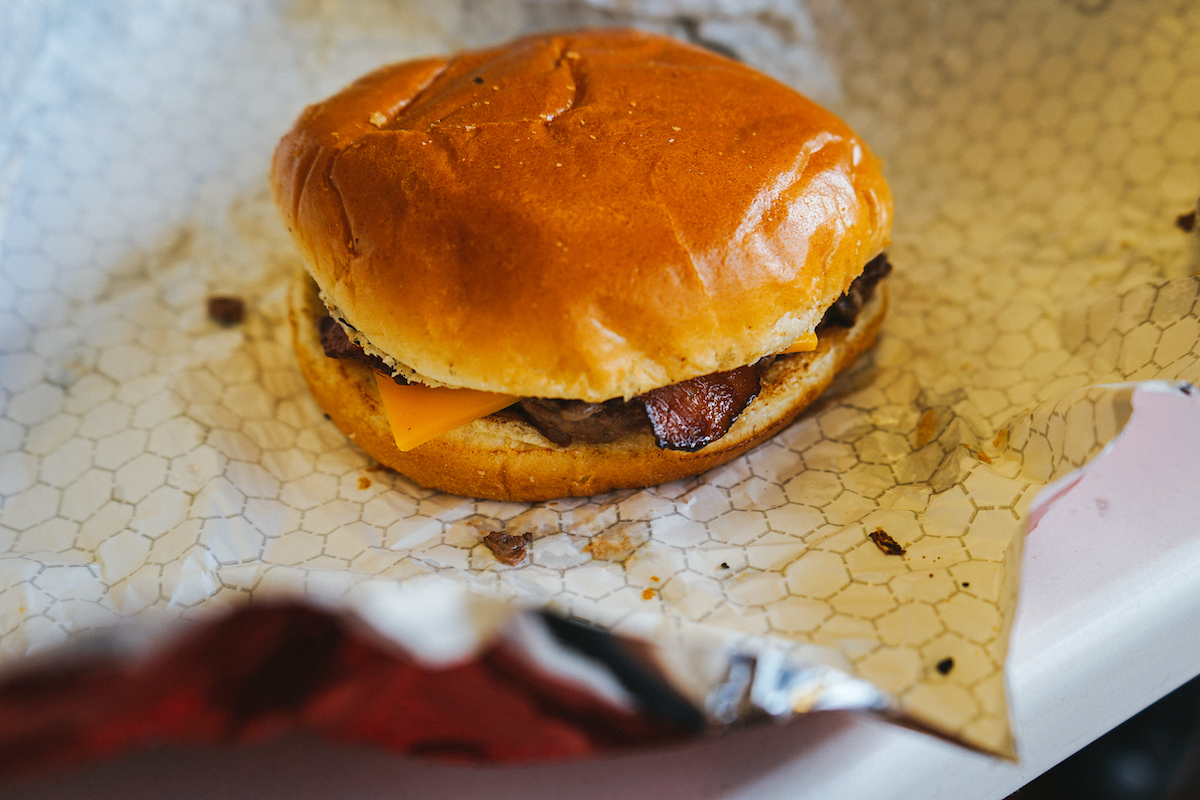 Chemical toxins that can mess with your endocrine system have been used in fast food and beverage packaging for years. Now a new study conducted by environmental advocacy groups Toxic-Free Future and Mind the Store found that "Nearly half of all food packaging samples tested positive for fluorine above the screening level, including for fast-food favorites such as McDonald's Big Mac, Burger King's Whopper, and Sweetgreen's salads and warm bowls." These toxins, which are used to make packaging materials grease- and water-resistant, have been associated with increased inflammation, and metabolic syndrome, a cluster of symptoms related to obesity, type 2 diabetes, and heart disease.

It can lower your 'good' cholesterol

HDL (high-density lipoprotein) is called the "good" cholesterol because it absorbs blood fats and carries them back to the liver, which then flushes it from the body. You want more HDL than LDL "bad" cholesterol in your blood; more means greater protection against heart disease and stroke. Fast food can bring HDL down, especially if it contains Trans Fatty Acids. Trans fat is the worst type of fat you can eat, say cardiologists. The more you eat, the greater your risk of heart and blood vessel disease, according to the Mayo Clinic, because trans-fat lowers your HDL and raises your LDL. Artificial trans-fat is found in partially hydrogenated vegetable oil. A Big Mac contains just 1 gram of the stuff, according to McDonald's nutrition facts, which doesn't sound like much, but experts recommend keeping your intake of trans fat as low as possible—no more than 2 grams per day. You can reverse these negative side effects by stocking up on the 17 Foods That Lower 'Bad' Cholesterol.

Eat This, Not That!
Inspired by The New York Times best-selling book series, Eat This, Not That! is a brand that's comprised of an award-winning team of journalists and board-certified experts, doctors, nutritionists, chefs, personal trainers, and dietitians who work together to bring you accurate, timely, informative, and actionable content on food, nutrition, dieting, weight loss, health, wellness, and more. Read more about Eat This
Filed Under
McDonald's // Unhealthy