After reading this, you'll start to question why anyone thought to call it a "Happy Meal."

Fast food. It's cheap, convenient, and predatorily marketed to us when we're young in the hope that we'll be consumers for life. For many companies, that strategy has paid off: more than 1 in 3 American adults consume fast food on a given day, according to the CDC.

But there's a wrinkle in that math. If we eat too much of this stuff, that frequent consumer's lifespan could be a lot shorter than if he'd eaten more food unassociated with clowns, colonels, kings, and freckle-faced girls with red pigtails. Studies have found that the higher the ratio of fast-food restaurants and convenience stores to grocery stores and produce vendors near home, the higher the prevalence of obesity and diabetes, which increase your risk of early death, in those communities.

See, in many cases, fast food is highly processed and contains large amounts of carbohydrates, added sugar, unhealthy fats, and sodium. These foods are almost always high in calories while offering little in the way of nutrition. And when fast food frequently replaces nutritious whole foods in your diet, it can lead to all sorts of bad health outcomes. Derailing your weight loss goals is just one.

Here are 17 serious side effects of a fast-food diet—all of which can happen to your body in a relatively short amount of time. And while you're making healthier choices, be sure you're stocked up on The 7 Healthiest Foods to Eat Right Now.

Your skin will deteriorate

Eating fast food may cause skin issues such as acne. "No, it isn't the chocolate or fried components," says Amy Shapiro, MS, RD, CDN, founder of Real Nutrition NYC. "It's the simple sugars, white flour, and empty carbs like French fries that can be blamed."

STAY INFORMED: Sign up for our newsletter to get the latest food news delivered directly to your inbox.

Some foods naturally contain higher amounts of sodium, but sodium is also added to many food products. Some of these additives are monosodium glutamate (MSG), sodium nitrite, sodium saccharin, baking soda (sodium bicarbonate), and sodium benzoate, which are used as flavoring or preservatives. Regarding dietary sodium limits, it's suggested that adults stay under 1,500 milligrams per day, and should never consume more than 2,300 milligrams day. A single fast-food meal can actually exceed 2,300 milligrams. Too much sodium causes your body to retain water, making you feel bloated and puffy.

Your memory and cognitive function will decline

Fast foods like bacon burgers, some fried foods, and milkshakes are often high in saturated fats. "It's been long established that saturated fats can negatively impact the heart, but there's also research that suggests high saturated fat intake may negatively impact brain function and memory," says Moore. She adds that higher intakes of saturated fatty acids may impair memory speed and flexibility and prospective memory (your ability to remember to do what you intended). You intended not to pull into the drive-thru, remember?

You'll increase your risk of obesity

If you switch from a balanced diet of whole foods to one of fast food, the most obvious difference you'd register would be the enormous uptick in (largely empty) calories you'd consume per meal. Hello, belly fat. And what's worse: "The high-calorie intake can lead to obesity, which puts you at risk for developing chronic diseases," warns Jim White, RD, ACSM, owner of Jim White Fitness & Nutrition Studios. Adults who reported eating fast food on at least one of two days they were surveyed by researchers had a higher body mass index (BMI) than those who did not eat any fast food, according to a study published in the Journal of the American College of Nutrition. The researchers concluded that frequent fast-food consumption may contribute to weight gain.

The high calories in fast food are accompanied by low nutritional content. Too much of that and your body will begin to lack the necessary nutrients it needs to function properly. "Your body is temporarily full with empty foods that don't provide nourishment, so even though you may have eaten a lot of calories, you won't be satisfied for long," says Shapiro.

Phthalates, a class of endocrine-disrupting chemical toxins, are used to line plastic food and beverage packaging. Unfortunately, they're not good for your health. One 2018 Environment International study found that people who often ate fast food had 35 percent higher levels of phthalate metabolites than people who mostly eat food bought at a grocery store and prepared it at home. Bad news for all-day-breakfast lovers since an Environmental Science & Technology study found phthalates to be associated with inflammation, and another study in Environmental Health connected higher exposure to phthalates with metabolic syndrome: a disease also commonly associated with increased levels of inflammation. Inflammation can cause a myriad of health problems from obesity to nutrient deficiencies.

Your teeth will decay 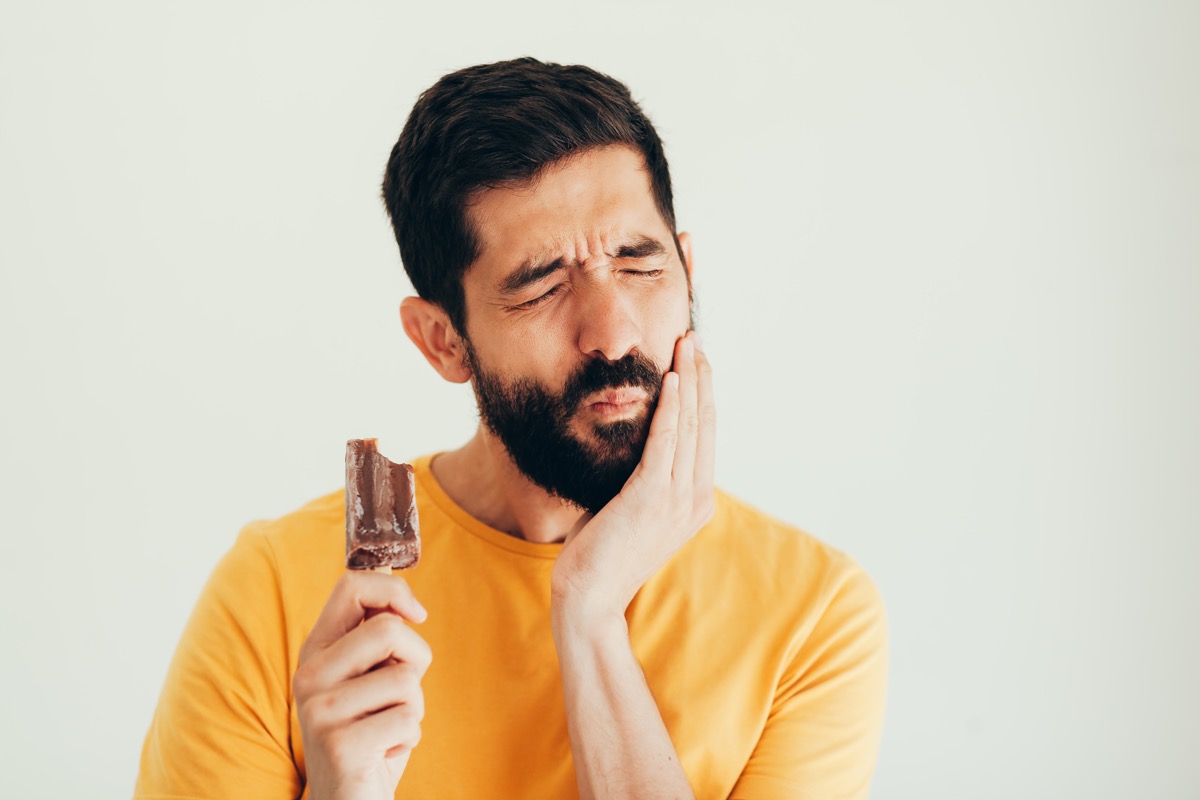 Frequent soda intake can lead to poor oral health, says Leah Kaufman, MS, RD, CDN. Drinking large amounts of soda increases the amount of acid in your mouth, which eventually causes tooth decay and cavities. "Some of your fast food desserts, such as McFlurries or Frosty, may also add to this," she says. And that's not all.

Your mental health could decline

Recent research shows that eating fast food may cause a higher rate of depression, Shapiro says. One study indicated that people who ate fast food were 51 percent more likely to develop depression than those who didn't.

Your kidneys and stomach will suffer

Your blood sugar will spike

Eating high-carb fast food increases your blood sugar. As you consume white-flour-based foods—such as the bun from a burger, or French fries with your sandwich—your body takes in a large amount of white sugar. "Frequent consumption of these foods may lead to diseases such as obesity—which the American Medical Association has indicated is a clinical diagnosis—and diabetes," says Kaufman.

There's a lack of omega-3 fatty acids in fast foods. Shocker! A dearth of those good fats can create a more anxious mental state. But it's not just what fast food lacks that can cause anxiety. This stuff is also high in refined carbohydrates, which can lead to fluctuations in blood sugar. If your blood sugar dips into hypoglycemic levels, you can experience anxiety, trembling, confusion, and fatigue.

Your cholesterol levels could skyrocket

Many fast foods served are derived from animal products, deep fried and served with cheese and high-fat dipping sauces. "The high fat content in fast food can contribute to high cholesterol, which can also lead to atherosclerosis. That occurs when plaque builds up in the arteries and prevents the flow of blood to the heart and organs," says White. What's more, fast food can lower your good (HDL) cholesterol, further putting your heart and your health on the line.

You may increase your risk of cancer

PhIP is short for 2-Amino-1-methyl-6-phenylimidazo(4,5-b)pyridine. According to the Physicians Committee for Responsible Medicine, this catchy-sounding chemical appeared in over 100 samples of fast food grilled chicken that were tested in a 2008 study published in Nutrition and Cancer. The organization says the substance, which forms when meat is heated to a certain temperature, is associated with human breast, prostate, and colon cancers. After a class-action lawsuit was filed in 2009, the Daily News reported that Burger King settled the suit and agreed to post warnings in its California restaurants.

Plus, you'll also find sodium nitrate and sodium nitrite in fast food meats. These additives are used to maintain meat color and to inhibit bacterial growth. Both chemicals can break down into nitrosamines, substances with the potential to cause cancer, according to a meta-analysis published in the journal Nutrients.

Fats commonly found in fast food are made up of saturated fatty acids. Those are fats that are solid at room temperature, often derived from animals and some plant oils, such as palm oil. You'll find it abundant in, say, a cheeseburger or french fries. White warns that these fats can raise your "bad" LDL cholesterol levels, which leads to an increased risk of cardiovascular disease.

Your bones could weaken

As we mentioned, fast food is typically loaded with sodium. One Big Mac has 970 mg of sodium, well over one-third of the daily recommended allowance. A high sodium intake can cause your bones to weaken, leading to possible osteoporosis, Shapiro warns.