Exercises You Shouldn't Do Anymore After 60, Say Experts

Well, no exercises are "off-limits." But here are some you'd be wise to avoid, say trainers.

Age, as they say, really is just a number—especially when it comes to your fitness. After all, if you're living a sedentary lifestyle at age 27, you probably shouldn't step into a gym and start doing tons and tons of high-impact burpees. At the same time, you can be ultra-fit at age 65 and bang out several of them. In short, with the right level of fitness—which is entirely relative and changes person-to-person—no exercises are 100% off-limits to you.

That said, if you're the average person over the age of 60, chances are your body goals will require a change, and your workouts should reflect that. You likely won't be chasing six-pack abs anymore—you'll be chasing better health and a higher quality of life. "The highest priority exercises for seniors are ones that help maintain bone density, muscle mass, and balance," Leann Poston M.D., M.B.A., M.Ed., of Invigor Medical, told us. Among the exercises she advises include "stretches to maintain flexibility to help relieve pain and maintain flexibility," along with "light strength training that can help maintain muscle mass and strength." (If you're new to weightlifting, she advises you to "start with light weights or even soup cans and increase the weight as you are able.")

On an individual level, you'd be wise to seek out your doctor and experienced personal trainers to get an exercise plan that's right for you. You may learn that there are some exercises you should either avoid, or you should tweak them in some way to fit your body. "Mine told me not to do Zercher squats, because of where he put my ulnar nerve," says Robert Herbst, a 63 year-old personal trainer and 19-time world champion powerlifter. "If someone has arthritic shoulders, for example, they could still bench press doing partial movements or dumbbells."

But on a general level, there are certain exercises that most trainers are in agreement that anyone over 60 should think twice about before doing them. Read on for what they are. And for more exercises that you should do, don't miss The Best Exercises for Building Stronger Muscles After 60, Say Experts.

There's nothing wrong with a senior partaking in a boot-camp class if he or she exercises within themselves and doesn't push their body to fatigue. Also, they can be super fun. But experts say that all of these high-impact moves aren't great for the typical over-60 body.

"Nothing is off-limits if you have no issues that can get worse from the activity, but if I had to list some things that are not all that great for older folks, it would be a hardcore boot camp-style class—or HIIT done with lots of jumping, or even something like cardio boxing," says Kim Evans, AFAA, ACE, USATF, a trainer and group instructor in Michigan. "If you haven't prepared your body to slam into the ground, or punch something or kick something, it can be a disaster."

As we age, she says, training should be done smarter, not harder. "As long as you work all sorts of aspects of training, strength, range of motion, cardiovascular and incorporate the basic moves such as squat, lunge, hinge, rotate, push, pull, plank—you are getting a complete workout." And for more reasons to exercise, don't miss this Secret Side Effect of Exercising More After 60, Says New Study.

Weight Lifts in Which You're Under the Weight 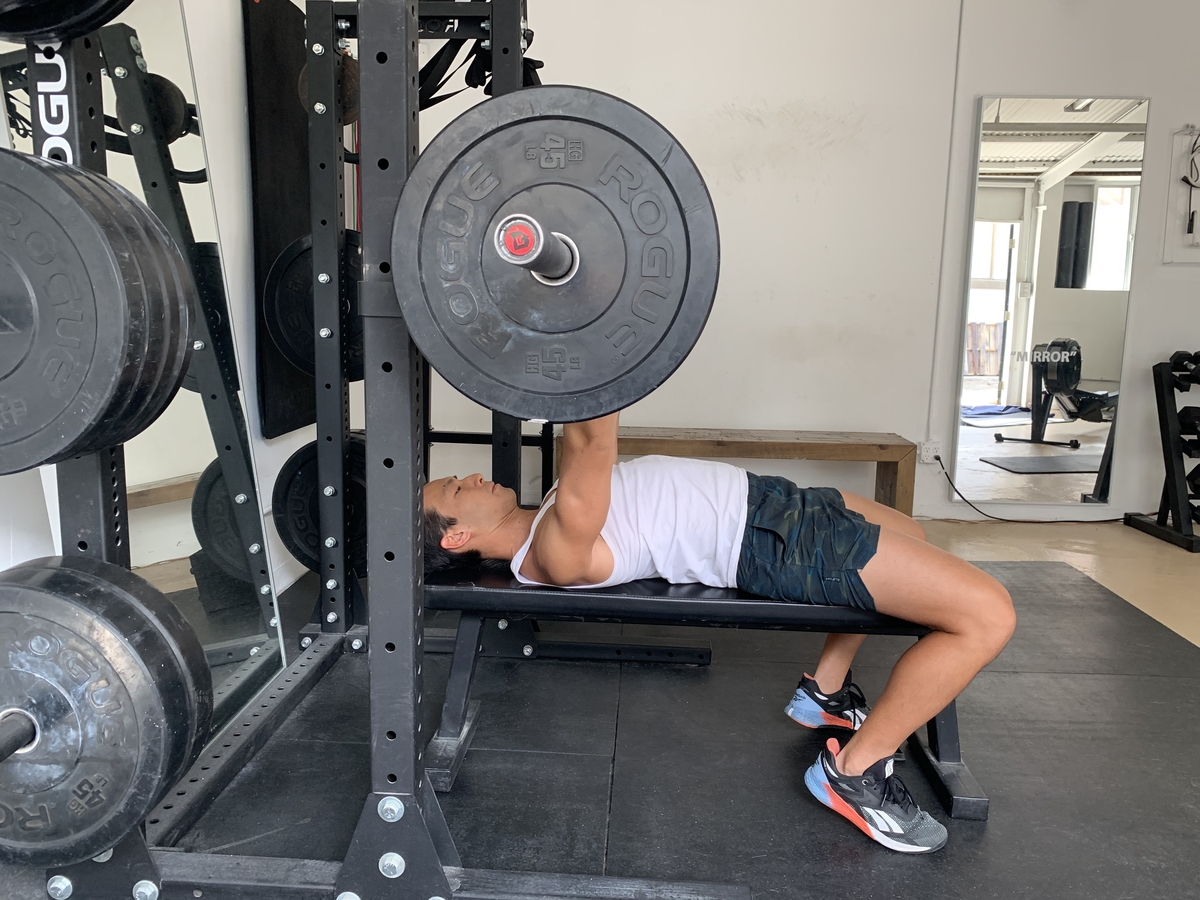 "Once you're over 60, the injury risk is not worth the reward," says Dave Durell, MS, PTA, a former collegiate and NFL strength coach and proprietor of Strength After 50. "Any exercise where you will be under the weight—without any barrier to catch the weight to prevent you from getting stuck under it—[should be avoided]." What exercises fit the bill? "Examples include the barbell bench press, and barbell squat," he says. "I recommend safer alternatives, such as the chest press machine." 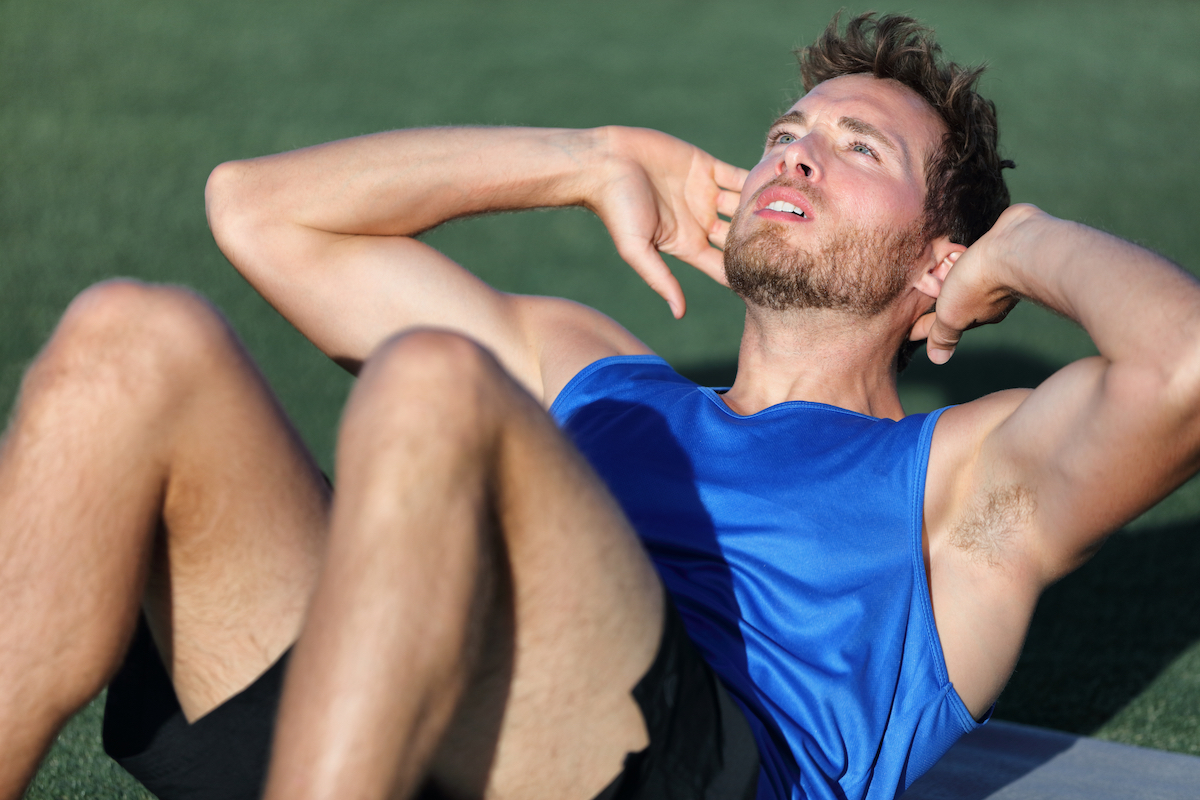 Let's face it: Crunches can be avoided at any age—and research suggests that they should be. But this is especially the case for people over 60, say trainers. "While training your core is important in old age, abdominal crunches should not be part of your exercise routine," says Isaac Robertson, a trainer and co-founder Total Shape. "Abdominal crunches involve repetitive spine curving, which can cause spinal injuries and back pain, especially if done with incorrect form."

Other trainers would advise you to cut out floor exercises altogether. "When working with clients who tend to be older, I try to limit how many floor exercises they do, especially early in the morning," says Jack Craig, CPT, of Inside Bodybuilding. "With age, spinal flexibility suffers, which means a person can have a hard time getting up from laying down on the floor. Prolonged time on the ground can cause lasting injury or health problems, so it's best to avoid these types of exercises altogether if the client cannot get up on their own."

Moves that Put the Weight Behind Your Head or Neck

Fact: Your shoulders can have a major impact on your quality of life you in your older years, and having strong, healthy shoulders—with a good range of motion—is crucial to getting through your days and continuing to live an active, healthy life. And it's simply a fact that tearing your rotator cuff, and injuries like shoulder impingement (when your tendons rub against the bone), are increasingly more common after 60.6254a4d1642c605c54bf1cab17d50f1e

"If you want your shoulders to stay healthy, don't put anything behind your neck," says Durrell. "Examples of this include barbell squats, behind the neck pulldowns/shoulder presses. I'd recommend safer alternatives such as under hand grip pulldowns to the front, machine or dumbbell shoulder presses." For more on keeping your shoulders healthy, don't miss these Shoulder Moves You Should Never Do After 60.

Long-Distance Running in the Morning

"People in their older years may want to avoid running first thing in the morning, especially if they haven't always been a runner," says Steve Stonehouse, a USATF-Certified Run Coach and Director of Education for STRIDE. "That's not to say you can't train up to being a runner, but waking up and running on pavement without a lot of prior experience or properly warming up can have a lot of impact on your joints."

He advises those over 60 and older to walk or take a light jog. "Doing so on a treadmill can also help alleviate some of the impact of running outside," he says. And for more great exercise advice, don't miss the Secret Side Effects of Lifting Weights for the First Time, Says Science.