What Is Ezekiel Bread, and Why Are People Obsessed With It?

There's a lot more to Ezekiel bread's grainy goodness than what meets the eye.

We get it—cutting bread out of your diet is just not an option (hey, some of us love it as much as Oprah does!) and with Food For Life's Ezekiel bread, you really don't have to. It's got the best of both worlds: it's tasty and nutritious, which means you can get your sandwich fix without the guilt.

One slice of Ezekiel bread is only 80 calories and loaded with micronutrients and macronutrients that'll keep you satiated and can help you lose weight or stay healthy. Plus, its ingredient list is totally pronounceable because it contains 100 percent wholesome good-for-you ingredients.

"When you're reading an ingredient list, you should be looking for the word 'whole grain,' which means that the grain is still intact and hasn't been processed and essentially re-fortified," says Jessica Crandall, a Denver-based RD, Certified Diabetes Educator, and National Spokesperson for the Academy of Nutrition and Dietetics. Since the loaf's first ingredient is organic sprouted wheat, Ezekiel definitely fits the bill!

Find out more about one of the best store-bought breads that's consistently an Eat This! option: Ezekiel 4:9 Bread.

What are the nutrition facts for Ezekiel 4:9 Bread?

For comparison, a slice of Pepperidge Farm Soft Sprouted Grain Bread serves up the same amount of fiber, but contains four times the amount of fat, 0.5 gram of saturated fat, more than twice the sodium, and 40 more calories, ringing in at 120 calories per 39-gram slice.

What ingredients are in Ezekiel bread?

Ezekiel bread is made with 4 types of cereal grains.

Soybeans contain magnesium and fiber, while lentils have been linked to everything from fighting cancer to promoting gut health to aiding weight loss. Get more of the mighty legume in your diet by whipping up some easy and wholesome lentil recipes.

All the whole grains and legumes used in Ezekiel 4:9 bread are sprouted.

All of the grains and legumes found in Ezekiel bread are sprouted—which means that they're better for you. Sprouting is the natural process that involves these seeds germinating and the plant sprouting out of its shell when coming in contact with water.

So, when foods like Ezekiel bread are labeled "sprouted," this simply means that this natural process was mimicked, leading to a ton more nutrients and healthful benefits. Sprouted grains and legumes are much lower in gluten, and because the sprouting process breaks down enzyme inhibitors, the bread is, therefore, easier to digest and much more nutrient dense (more on that later).

Unlike most commercial bread loaves, which contain added sugars disguised by titles like high fructose corn syrup, date syrup, and even honey, the Ezekiel Flax Sprouted Whole Grain bread doesn't contain even one gram of the saccharine carb.

On the other hand, competitor Pepperidge Farm adds brown sugar and molasses to their sprouted grain bread for a total of 2 grams of added sugar per slice. That means you'd consume at least 4 grams of sugar in each sandwich you make with this bread.

The fact that Ezekiel bread has no added sugars is good news because consuming too many added sugars can help you pack on belly fat. "When rats are drinking high-fructose corn syrup at levels well below those in soda pop, they're still becoming obese—every single one, across the board," says psychology professor and appetite and sugar addiction specialist Bart Hoebel in a press release about a study investigating the link between the consumption of high-fructose corn syrup and obesity.

There are no additives or preservatives listed in the ingredient list.

Nope, no artificial sweeteners, dyes, preservatives, or shortenings. Rest assured that Food For Life harnesses the natural powers of the mighty grains and legumes in their purest, most natural form—which we're totally on board with!

No, Ezekiel bread is not gluten-free. The ingredient list includes "Wheat Gluten". Plus, there is also naturally-occurring gluten found in the Sprouted Organic Wheat.

You may have heard that people who are gluten sensitive (but not gluten intolerant) don't experience the same digestive issues with sprouted bread that they have with other loaves of bread. According to Food for Life, their "unique sprouting process activates enzymes, which naturally metabolize starch, carbohydrates and gluten protein. This may explain why so many gluten sensitive people may tolerate sprouted grains."

Why do you find Ezekiel bread in the freezer aisle?

Most stores keep preservative-free Ezekiel loaves in freezers in order to prevent molding and retain that bakery-made taste. That's because there are no preservatives in the bread. Without artificial preservatives, Ezekiel bread will go through the natural process that happens to all real food: spoiling! Freezing delays that process.

Where should you store your loaf of sprouted bread?

Although some stores sell Ezekiel bread at room temperature, the best place to store sprouted bread is in the freezer.

According to Food For Life, your loaf of bread's shelf life depends on storage:

Freezing the whole loaf and toasting a slice whenever you want will ensure your bread's taste is always up to par. So, if you can't find the sprouted loaf in the bread aisle of the grocery store, hit the freezer section! And while you're there, check out these other best weight loss foods to buy frozen.

What are the health benefits of Ezekiel bread?

1. It's high in fiber and may help lower cholesterol.

This bread is higher in fiber than many of its competitors. It has four grams of belly-filling fiber in only one slice. "Ezekiel bread is a non-processed, high-fiber, healthy whole grain bread that tastes great when paired with all-natural peanut or almond butter," says Moskovitz.

Also, research published in The Canadian Medical Association Journal discovered that munching on three-quarters of a cup of cooked legumes (like soybeans and lentils found in Ezekiel bread) daily could reduce LDL levels (the bad cholesterol) by approximately five percent.

2. A slice is high in protein.

"Since Ezekiel bread is made from sprouted grains, it's higher in protein, which will help to promote satiety and balance blood sugar," explains Isabel Smith, MS, RD, CDN, and founder of Isabel Smith Nutrition. In fact, sprouting legumes increases their protein levels by a whopping 50 percent! Ezekiel Bread contains five grams of protein per slice. Even better is that it contains all nine essential amino acids, which makes it a complete protein.

3. Ezekiel bread is teeming with nutrients.

Ezekiel bread is a great source of zinc, vitamin B6, folic acid, calcium, magnesium, iron, and more. Additionally, sprouting grains erodes their anti-nutrients, starches, and gluten. Translation: Your body digests this bread is more easily and allows you to absorb more nutrients. According to the American Journal of Plant Nutrition and Fertilization Technology, sprouting the grains and legumes ups their vitamin synthesis by six to 10 times—especially vitamins B2 (AKA riboflavin), B5, and B6, as well as activating vitamin C production. Still don't believe bread can help you reach your weight loss goals? Sprouting grains decreases their fats and carbs by up to 25 percent. Plus, millet's high fiber and magnesium levels can help "regulate blood sugar levels, which is helpful for diabetics and those trying to lose weight," says Lori Zanini, RD, CDE, Spokesperson for the Academy of Nutrition and Dietetics.6254a4d1642c605c54bf1cab17d50f1e

Because most of America's soy products are genetically modified, it's especially important to choose organic when consuming soy (like soybeans found in Ezekiel). Soybeans are one of the best sources of magnesium (54 milligrams of magnesium per ½ cup, or 14 percent of your DV). The problem is that processing and genetically modifying the beans strips them of their high magnesium levels. Opting for organic soybeans is your best option.

Vegans, rejoice! This loaf doesn't contain a trace of eggs, butter, or milk. Plus, it provides many nutrients vegans may be deficient in, such as iron (4% DV) and protein (8% DV).

Finally—diabetics can enjoy a slice or two of bread without the dreaded sugar spike! Ezekiel bread lands among the best foods for diabetics because it's low-glycemic. The Glycemic Research Institute also awarded the bread the Diabetic Friendly Seal. Food For Life shares that eating Ezekiel bread as part of a healthy diet may help to:

How did the sprouted bread get its name?

If you were wondering why the bread's name seems formatted like a Bible verse, it's because it actually is one! According to the New International Version, Ezekiel 4:9 states, "Take wheat and barley, beans and lentils, millet and spelt; put them in a storage jar and use them to make bread for yourself."

What other products does Food for Life make? 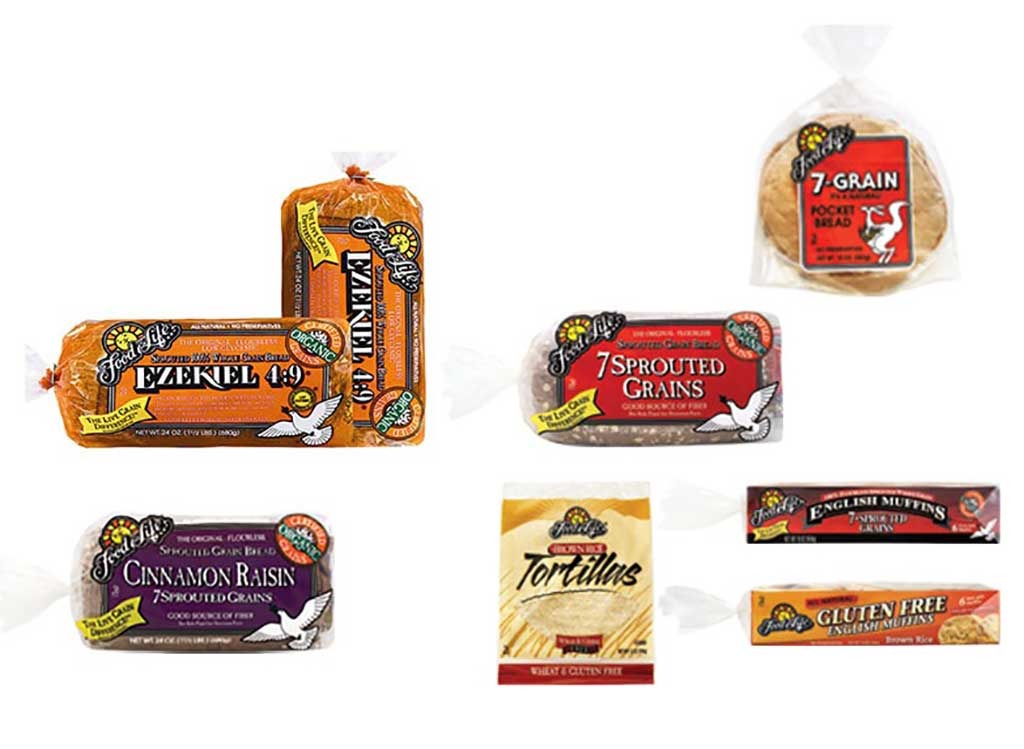 Food For Life doesn't just stop at Ezekiel bread; it makes other sprouted products such as English muffins, buns, tortillas, pocket breads (like pita bread), waffles, cereal, and pasta. It's never been easier to replace refined and processed grains with wholesome sprouted products. For more good-for-you items you should stock up on, check out these foods busy—but healthy!—people keep stocked.