What Happens To Your Body When You're Hangry

Here's why you're likely to get angry when your blood sugar's low.

One minute you're out for a walk, happily engaged in conversation—and the next, you've turned into a crazy monster with a grumbling stomach who snaps when your friend accidentally brushes against you. Or you're at the deli, finally next in line, and that woman's indecisiveness makes you want to scream in a fit of rage "JUST PICK SOMETHING!"

Sound familiar? If it does, you're not alone. You've likely experienced hanger—anger fueled by hunger—a phenomenon where people become grumpy and short-tempered (Read: turn into ravenous, crazy people) when they're overdue for a snack and their blood sugar is running low. It feels like your stomach is about to eat itself, your brain feels like it's in a fog, and your body feels drained. Not only is hanger extremely uncomfortable (for you and whomever the poor soul is who happens to be near you at the time), but it can also lead to heightened food cravings, putting you at risk of reaching for an unhealthy snack and making less-than-optimal food choices.

So, what is it that makes us like this and what's really going on when we're hangry—let's find out!

Your Body Freaks Out About Where Its Reward Is 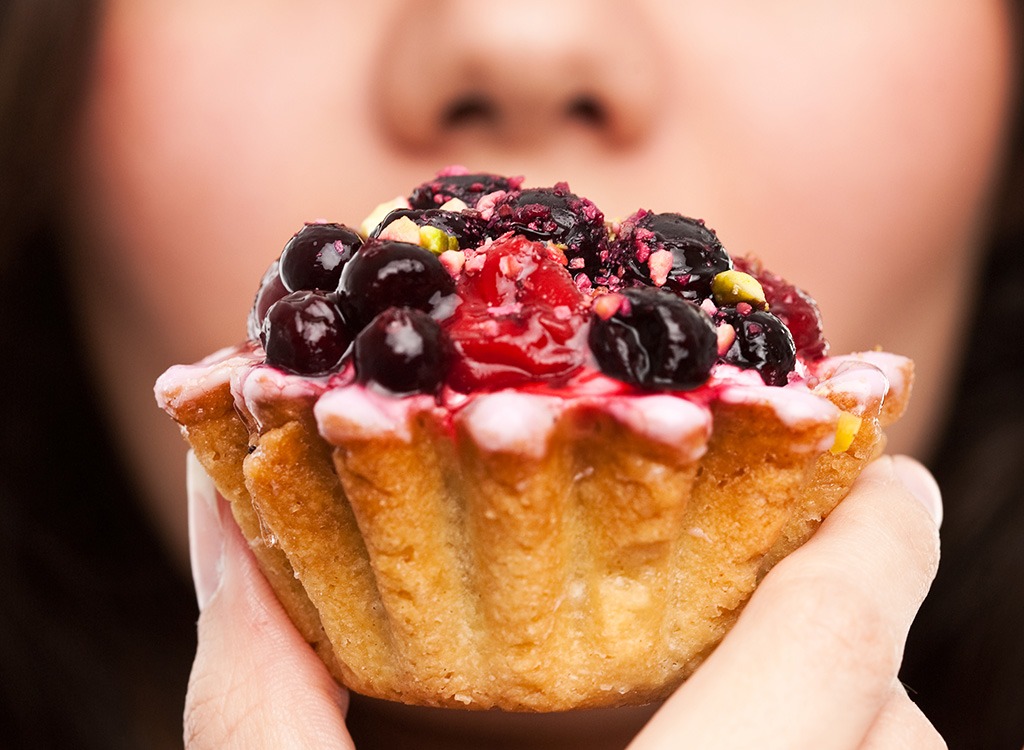 When we eat food, the region of our brain that processes pleasure and reward lights up as the fats and sugars of the meal release chemicals known as opioids that bind with receptors in the brain. You read that right. These are the same type of signaling chemicals as drugs. In turn, this triggers the release of dopamine, one of the feel-good hormones that regulate things like emotion, behavior, alertness, and impulsivity. It's the same hormone that is released when we fall in love, gamble, have sex, and partake in drugs and alcohol (and what ultimately plays a part in addiction). So, because consuming food is related to making you happy, your brain wants you to continuously repeat that pleasurable feeling. And you're keeping it from doing that. (Psst! When you do finally eat, check out these 23 Foods That Happy People Eat!)

Your Stomach Yells at Your Brain to Eat 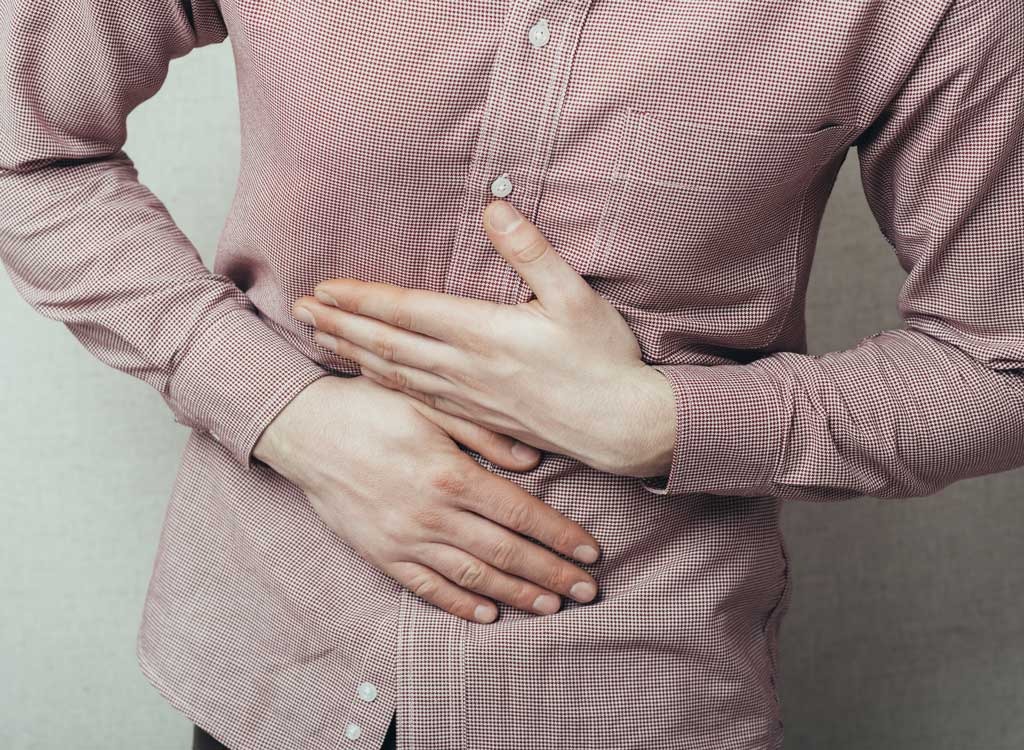 What happens when you don't get food? It all starts with ghrelin. When the stomach is empty, it releases ghrelin, the hunger hormone. Ghrelin is produced in the gut in response to your standard meal schedule—as well as at the mere sight or smell of food—and is designed to signal your brain that your body needs more energy or food. When ghrelin hits the brain, it hits areas that control your body's automatic processes, metabolism, and the reward center we just mentioned. When ghrelin causes all that stimulation, your brain has to listen. And it usually does so by making you eat food. So when you're depriving that sensation, you're really ticking off your brain.

Ghrelin's role in controlling the reward center of your brain is pretty powerful, and, as it turns out, might be one of the contributing factors to your hangriness. According to a study in the journal Neuropharmacology, when researchers stimulated mice with systemic ghrelin (which should tell their brains to eat) but did not actually provide any food for them to nosh on, the dopamine levels in their brain didn't just stay the same, they actually decreased.

Because dopamine is a neurotransmitter that aids in improving mental function and concentration, just that slight change in dopamine levels that you might experience by depriving yourself of food can affect your ability to concentrate and focus on daily work. Furthermore, this neurotransmitter is also in charge of keeping emotions in check, so low dopamine can mean you have less control over your anger.

Other people who have decreased levels of dopamine? People who are going through alcohol or drug withdrawals. And they commonly experience irritability, mental confusion, anxiety, agitation, and slowness in thought. So when you try to ignore your body's messages that you need to eat, your hanger may be coming from a place of addition and withdrawal.

Another reason you get hangry is also tied to the hunger hormone. After ghrelin is produced in the gut and travels to the brain, the brain then commands the release of a second hormone called neuropeptide Y, which stimulates appetite. This natural brain chemical has several functions, including increasing food intake as well as regulating anger and aggression, and it seems like the two are linked. According to a study in the journal Biological Psychiatry, people with high levels of neuropeptide Y in their cerebrospinal fluid had more measures of aggression and impulsivity as well as impulsive aggression. So it certainly makes sense that high levels of nY caused by hunger can lead people to become a bit hangry.

You're Low in Brainfood

While many hormonal changes contribute to hanger, basic body functions do as well. After we eat, our bodies digest food into its basic parts: protein to amino acids, fats to fatty acids, and carbs to glucose. Glucose is our body's primary unit of energy (followed by fatty acids or lipids). As our body digests glucose, it enters into the bloodstream to help feed our organs and tissues. After around 6 hours, your blood glucose levels become too low to provide adequate energy. While other organs can use different nutrients to continue to function, your brain critically depends on glucose. In fact, 25 percent of the energy you get from food is used for your brain alone. So when the sugar in your bloodstream goes down, so does your brainpower. Feel like you're lacking in mental acuity? Don't miss out on these 10 Best Brainpower-Boosting Secrets.

Even Your Brain Gets All Hangry

Low blood sugar can have a particularly large effect on high-level tasks and emotions that require the most amount of energy, like self-control and anger. When your brain lacks adequate fuel, the part of the brain responsible for curtailing angry impulses doesn't have enough resources to exert self-control. For example: In a study published in Proceedings of the National Academy of Sciences, researchers found that married couples get increasingly angry and mean towards one another—via pin pricking a spousal voodoo doll and blasting opponents with loud noises—when their blood sugar was low.

It's not just married couples either. Researchers at Florida State University who reviewed studies on the subject were able to link glucose with being the primary source of self-control. They found depressed glucose levels were associated with increased irritability around others, over-the-top anger, and general anxiety, while restoring glucose levels through either giving participants a sugary snack or upping their levels of insulin—the hormone which helps your body store glucose—were able to sufficiently improve self-control.

Your Levels of Stress Hormones Increase

If your blood-glucose levels fall far enough, your brain will perceive it as a life-threatening situation. In turn, your brain instructs several organs in your body to synthesize and release hormones that increase the amount of glucose in your bloodstream. This effect, called the glucose counter-regulatory response, causes your body to increase production of hormones that can directly signal the conversion of stored glycogen into glucose, like the hormone glucagon, but also the stress hormones adrenaline (aka epinephrine aka the fight-or-flight hormone) and cortisol—known as "the belly fat hormone" for its ability to trigger hunger and pull lipids from the bloodstream and store them in our fat cells.

These stress hormones are released in all sorts of stressful situations, not just during the stress of low blood glucose levels. And just as you might instinctively shout out in anger at someone when your stress hormones are heightened during a dangerous situation, the flood of adrenaline you get when you become hangry can promote a similar response. Feeling stressed in general? Don't miss these Teas for Weight Loss That Combat Stress!

Even though your brain is attempting to use all of these hormones to alleviate your hunger, your body might not even have the proper building blocks to make these hormones. Dietary nutrients such as tyrosine, tryptophan, and choline provide the building blocks for certain mood-regulating neurotransmitters. The catch? Your body can only get these nutrients from food. You're probably familiar with choline, a nutrient found in egg yolks which is required to synthesize acetylcholine, the neurotransmitter that plays important roles in arousal, attention, motivation, and muscle-activation. High tyrosine levels allow neurons to manufacture dopamine, which we've already covered, and tryptophan is the precursor for serotonin, a calming neurotransmitter whose low levels are associated with aggressive behavior.

We're Not Eating Properly In General 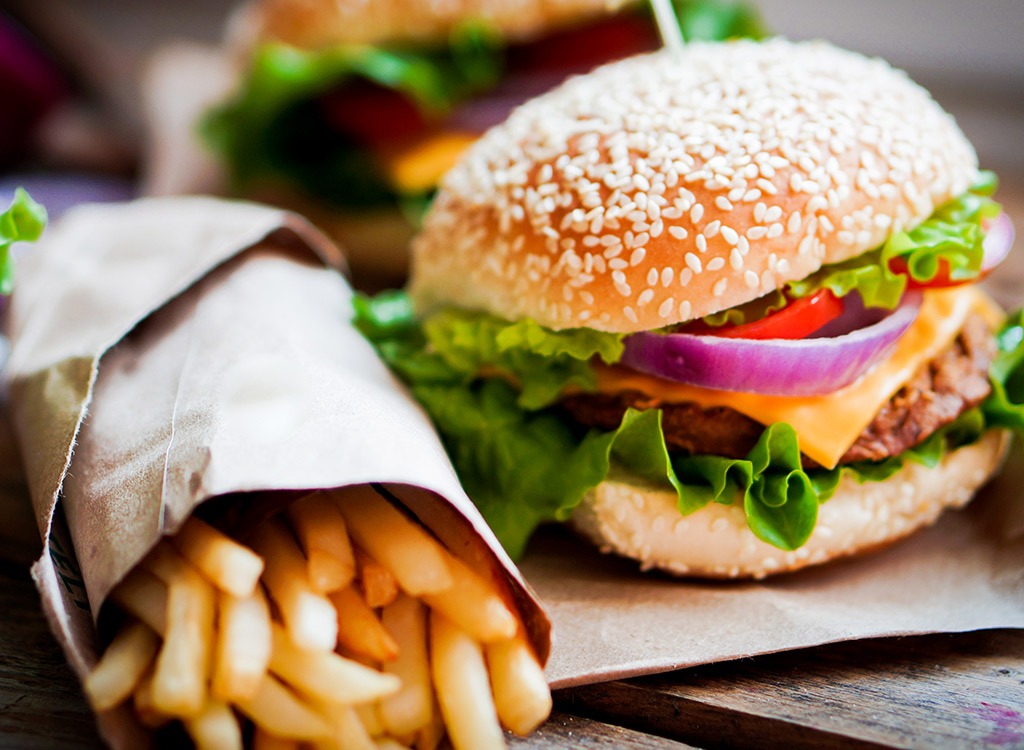 Our bodies, like cars, need the proper fuel to survive and run efficiently. In this analogy, you probably guessed correctly that fuel is food, and in particular, the unit of energy is glucose. When we put the wrong types of fuels into our bodies, like highly processed foods such as refined sugars and carbs, we're not giving our body the proper nutrients it needs to function properly. If you rely on pro-inflammatory foods like fast food and processed junk, your body is most likely depleted in antioxidants and phytonutrients from fruits and veggies that help our bodies rid themselves of toxic metabolites.

The moment our digestion stops, our body goes through a period of "cleaning" where our tissues release toxic substances into circulation for removal. Without free-radical-fighting antioxidants to clear them out, your cells have to store these toxic products that build up in the body. A study in Nutrition Journal found that people who were on a low nutrient diet were more likely to feel hungry after a meal and were also more irritable when hungry, as opposed to those on a high-nutrient diet. The researchers speculated that our bodies can become addicted to these toxic metabolites, so when some people feel weak, headachy, tired, or mentally dull after a meal they might confuse it with hunger, but what they really could be experiencing is withdrawal symptoms.

So What Can You Do About It?

As you can see, there are several different pathways and mechanisms at play that might be contributing to your anger when you're hungry. But lucky for you, the only thing you need to focus on is stuffing your face! While you may have a hankering for the fastest, easiest kind of fuel—like soda or chips—know that grabbing a smoothie or handful of nuts is just as easy. Junky, processed foods may satisfy you right away, but they'll unavoidably lead to spikes in blood glucose levels that come crashing down—fast. Leaving you even hangrier. Be sure to reach for nutrient-rich, satiating foods high in healthy fats, protein, and fiber.

RELATED: Are You Unhappy? Walk This Far Before Breakfast, Says Science

Olivia Tarantino
Olivia Tarantino is the Managing Editor of Eat This, Not That!, specializing in nutrition, health, and food product coverage. Read more about Olivia
Filed Under
Food & Nutrition // Tips