Our Guide to the Best Healthy Cheeses

You know what stinks? It's not the Limburger, the Époisse, or the Taleggio. No—it's the fact that a lot of people assume cheese doesn't deserve a place in a healthy diet.

Well, we're here to tell you those people are wrong! The assumption stems from the (admittedly correct) belief that many kinds of cheese pack in a lot of calories and fat in just a couple of bites, so those looking to lose weight certainly have to be wary of portion sizes. That being said, when this dairy product is made with simple ingredients, is relatively unprocessed and naturally preserved, and is full of a variety of nutrients, it can still be part of a healthy lifestyle.

In fact, cheese is actually quite nutritious: It's full of protein, healthy fats, bone-building calcium, vitamins A and B12, and minerals like zinc and phosphorus.

But not all cheeses are created equal. And with the thousands of varieties of cheese, figuring out which is best can take as much skill as a sommelier selecting a glass of wine to pair with each course of a Michelin-starred dinner. Instead of leaving you high and dry in the cheese section, we've consulted experts and dug through mountains of research to uncover which cheeses are best for your bod. (We aren't trying to create a comprehensive cheese guide that rivals those of cheesemongers; we're just trying to give a nutritional viewpoint and suggestions for those who may be unfamiliar with cheese.) Arming yourself with this guide and these 50 Best Weight Loss Tips will help you trim down and tone up in no time.

Although many people have avoided cheese in the past because of its high levels of saturated fats, it's important to note that a large meta-analysis of hundreds of studies spanning decades of research published in the American Journal of Clinical Nutrition concluded that there's a lack of significant evidence connecting saturated fats to the development of coronary heart disease and cardiovascular diseases. That being said, fat is still a very calorie-dense macronutrient and should still be eaten in moderation.

Best for A Post-Workout Snack

Per calorie, low-fat mozzarella and cottage cheese are two of the best high protein foods; they even beat out chicken for grams of protein per calorie! After an iron-pumping workout, you want to eat a snack that's full of energy-restoring carbs as well as muscle-building protein. These two cheeses are high in protein and are versatile enough to pair with other foods. Try cottage cheese on top of rye bread and avocado or mozzarella with a slice of tomato and basil!

Zinc is an essential mineral that's involved in countless roles in our body, from metabolism to wound healing. One important role it plays is in regulating your immune system. In fact, a recent study conducted by Ohio State University researchers found that the mineral can effectively mute the severity of a cold if taken once you begin to feel your nose go. Swiss cheese earns a stop in the top 15 foods for providing zinc, ringing in with 1.2 mg (or 8 percent of your daily recommended intake) per 1 ounce serving. Besides munching on some Swiss, you can also stock up on these 13 Foods to Eat When You're Sick if you feel a cold coming on.

Best for Those Watching Their Weight 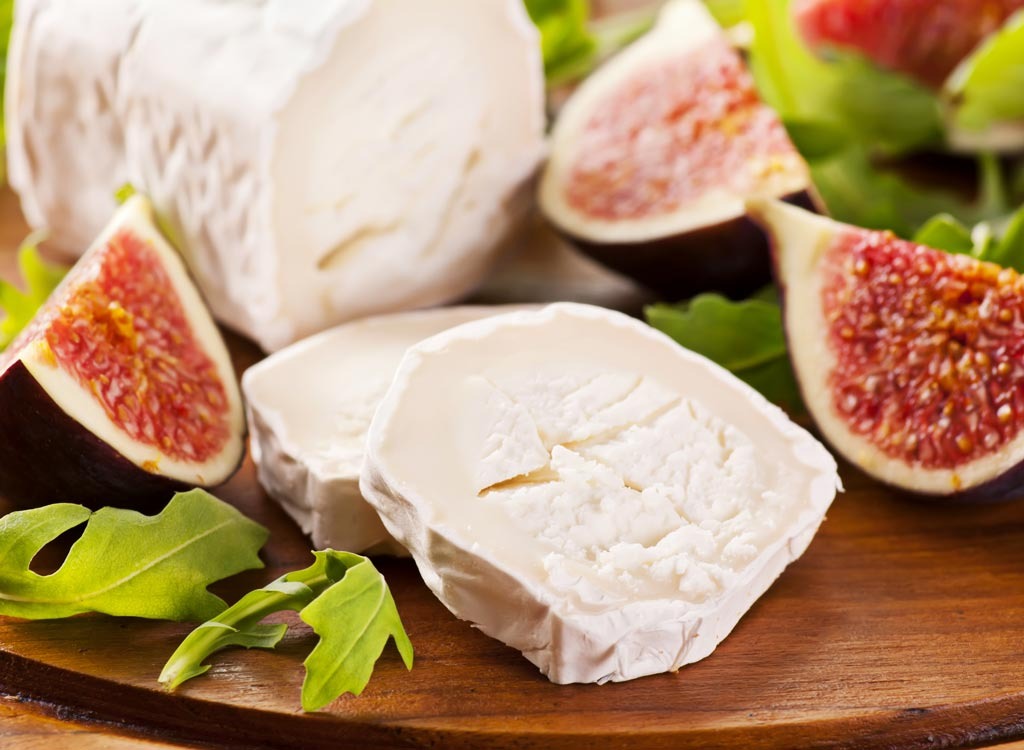 Eat This: Goat's milk cheese, such as Greek feta or goat cheese

Nutrition might not be the first thing on your mind when you're picking out a cheese, but even if cheese seems like an indulgence, it actually isn't that bad for you—especially if you pick a goat cheese. Compared to other cheeses—like 75-percent fat triple-crème brie, which has over 130 calories per ounce—tangy goat cheese only has 75 calories per ounce. Besides allowing you to indulge without exceeding your tight calorie budget, goat milk is nutritionally stellar in another way: According to research published in the Journal of Dairy Science, goat milk increases one's absorption of iron as well as improves bone formation and the bioavailability of certain minerals more effectively than cow's milk.

Cheese is one of the top dietary sources of vitamin B12—a vitamin that many vegetarians are deficient in as it's only found in animal products. This water-soluble vitamin plays an important role in energy metabolism, maintaining the nervous system, and formation of blood cells. Swiss cheese provides the most vitamin B12 out of all cheeses with 14 percent of your recommended daily intake in just 1 ounce.

Best for the Lactose Intolerant


Not That!: Ricotta, Colby, and American (which all have up to 5 percent lactose)

For 65 percent of the world's adult population, eating certain cheeses can be accompanied by nausea, cramps, and even vomiting. That's because these people have difficulty digesting lactose, the naturally occurring sugar present in milk that also is found to a lesser degree in most dairy products. The simple act of aging cheese can help with this issue, as the longer a cheese ages, the more time the added bacteria has to convert lactose into lactic acid. Additionally, aged cheese has less moisture and are drained more than fresher cheeses, meaning more lactose will be separated out with the whey.

Many also experience intestinal discomfort from cow's milk because its proteins are very large. Simply choosing a goat's milk or sheep's milk cheese can fix this because their smaller proteins are more easily digestible.

Best for A Late-Night Snack


Not That!: Whole-milk cottage cheese

You don't have to completely avoid food before bedtime in fear that your body won't metabolize it. In fact, going to sleep hungry can actually be bad for your weight loss goals by disrupting a restorative night's sleep. Instead, have a little cottage cheese before hitting the hay. Not only is it rich in casein protein—a slow-releasing milk protein that will keep a rumbling tummy at bay through the night—it also contains the sleep-inducing amino acid tryptophan. Just be sure to opt for a low-fat cheese before bed. Eating high-fat foods (like a whole milk cottage cheese) before bed can cause bloating and indigestion that interferes with a sound night's rest. For more go-to nighttime choices (and those you should avoid), don't miss our exclusive guide: The 30 Best and Worst Foods to Eat Before Sleep.

Best for Those Allergic to Penicillin


Not That!: Aged, moldy cheese (Blue cheeses like Roquefort, Gorgonzola, and Blue Stilton) or bloomy rind cheeses (such as Brie and Camembert)

According to the American Academy of Allergy Asthma & Immunology (AAAAI), it's possible that those who are allergic to the medication penicillin can also be allergic to penicillium mold. In which case, eating certain cheeses that are aged with bacterial strains similar to penicillin may (but will not always) cause you to have an allergic reaction. Although a study published in Applied and Environmental Microbiology found that the species of mold used in blue cheese Penicillium roqueforte and in other creamy soft cheese Penicillium camemberti or Penicillium glaucum don't possess the same antibacterial activity as the medicine itself (which comes from the Penicillium chrysogenum strain), consuming these cheeses may still cause an allergic reaction to those who have an allergy to the medicine penicillin.6254a4d1642c605c54bf1cab17d50f1e 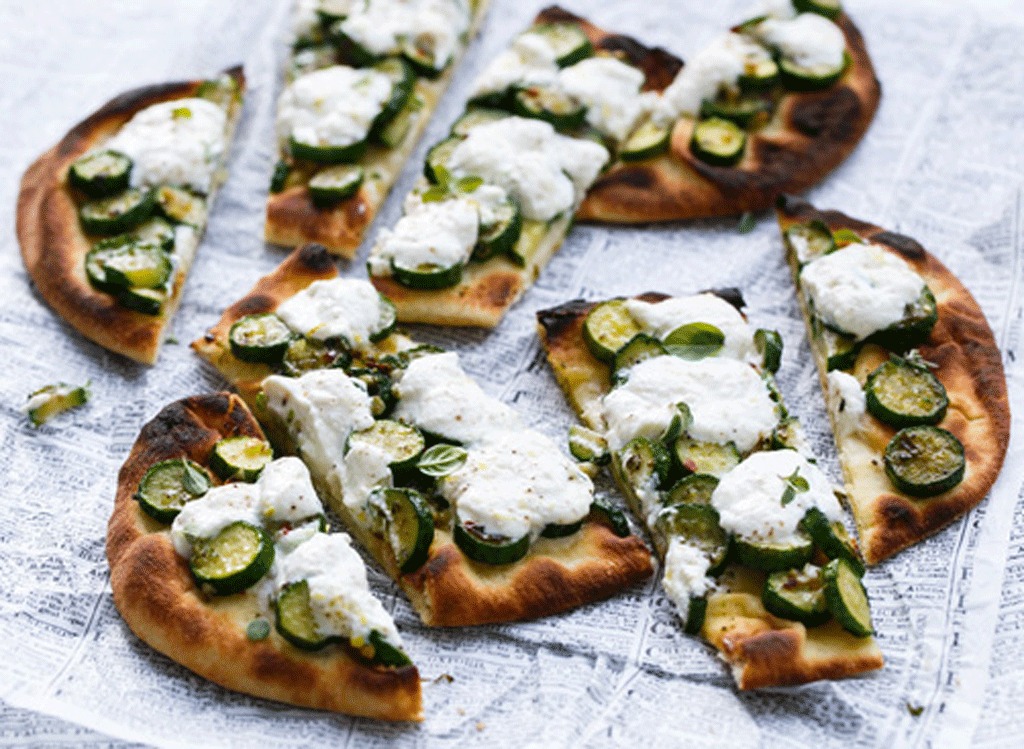 
Not That!: D.O.P. (Denominazione di Origine Protetta, the Italian equivalent of protected designation of origin) Parmigiano-Reggiano

It may surprise you to hear that not all cheeses are vegetarian. That's because of an ingredient used in many cheese-making processes: rennet. Harvested from the stomach lining of young cows, rennet is a coagulant that helps to separate curds from the watery whey. Luckily, scientists have developed vegetarian alternatives. You can look out for a "vegetarian" label to be sure your cheese follows your diet, or you can simply make your own ricotta at home (it only requires milk, vinegar, and salt!). On the other hand, steer clear of any European and Old-World cheeses, such as Italian certified Parmigiano-Reggiano. Because this cheese is D.O. (designation of origin) protected, cheese-makers have to follow an exact recipe and method to make it, and it includes animal rennet.

Best for Those Looking to Improve Their Gut Health

Many cheeses are created by adding live bacteria cultures, which ferment the milk's natural sugars into anti-inflammatory lactic acid. Aged, soft cheeses—like brie—are usually the only type of cheese that will maintain the beneficial bacteria. The longer the cheese ages, the more beneficial bacteria for your belly. Bloom cheeses, in particular, have extra bacterial cultures added to their rind. Results are preliminary, but a recent study published in the journal Food Microbiology has found evidence that some of these cultured bacterial strains found on aged cheese may provide probiotic benefits.

This aged Italian cheese is teeming with the bone-building nutrient, providing 360 mg of calcium per ounce; that's 15 percent of the FDA's recommended daily intake. Calcium isn't just great for preventing osteoporosis, it can also help you lose weight! The combination of calcium and protein found in dairy products has been found to increase thermogeneis—the body's core temperature—and thus boost your metabolism.

Want to impress your friends or test your taste buds? Try a raw milk cheese! You probably shouldn't drink unpasteurized, raw milk (due to the risk of harmful bacterial contamination), but eating raw milk cheese is perfectly safe. In fact, the United States requires any raw milk cheese to be aged for a minimum of 60 days to allow the acids and salt in the cheese to destroy harmful bacteria. What's unique about raw milk cheeses is that they have a more diverse flavor profile. When you pasteurize milk, which requires bringing up the liquid to a high enough temperature to kill any bacteria, you end up killing off good bacteria that will eventually infuse the cheese with natural, exotic flavors that aren't easily replicated by synthetic bacterial cultures.

Serena Williams may get most of the credit for her dominance in the tennis world, but we'd bet her success would not have been possible without the help of her older sister, Venus. The same thing goes for calcium. The mineral is famous for its role in maintaining bone health, but it wouldn't be able to do its job without Vitamin K2 (i.e. Venus).

Also known as menaquinone, vitamin K2 is essential for allowing your bones to take in calcium, hence why it's connected to improving bone mineral density. Studies have underscored its importance: postmenopausal women who consume the most amount of vitamin K2 have the lowest risks of bone fractures and for every 10 micrograms of K2 consumed per day, your risk of heart disease decreases by 9 percent. There currently is no daily recommended intake for vitamin K2, but a Journal of Nutrition study has found that 97 percent of Western populations are deficient. Luckily, eating a slice of cheese can help! According to vitamin expert, Dr. Rheamue-Bleue, Gouda—as well as Brie and a Norwegian cheese called Edam—contains about 75 mcg of vitamin K2 per ounce.

For the same bone benefits, a fermented soybean dish known as natto clinched a spot on our list of 50 Healthiest Foods for Women.

Olivia Tarantino
Olivia Tarantino is the Managing Editor of Eat This, Not That!, specializing in nutrition, health, and food product coverage. Read more about Olivia
Filed Under
Cheese