These Plant-Based Brands Are Crushing Sales—and Their Meaty Competition

Meatless alternatives are showing up the real stuff via demand and nutritional value.

Trivia time! What do the earth becoming warmer, heart disease continuing to be the leading cause of death in the U.S., and water becoming scarce all have in common? Believe it or not, these issues can all be linked back to meat consumption. Thankfully, consumers have demonstrated awareness of these problems by purchasing less meat, and instead, opting for meatless alternatives.

According to the Plant Based Food Association and The Good Food Institute, retail sales of plant-based alternatives hit $5 billion in 2019—an 11.4 percent increase from the year before. Health-forward brands have increasingly found ways to make plant-based versions of eggs, meat, and seafood, and shoppers have continued to exhibit interest in getting in on the meatless trend.

By this point, you've likely heard of big-name brands such as Beyond Meat and Impossible burger. However, there are myriad other newcomers that incorporate healthful ingredients and deserve a shoutout too.

Here are three such lesser-known brands that sell excellent meatless products, and how they compare to three popular meat-based brands. What you'll find? The meaty competition doesn't stand a chance (nutritionally, speaking, of course). 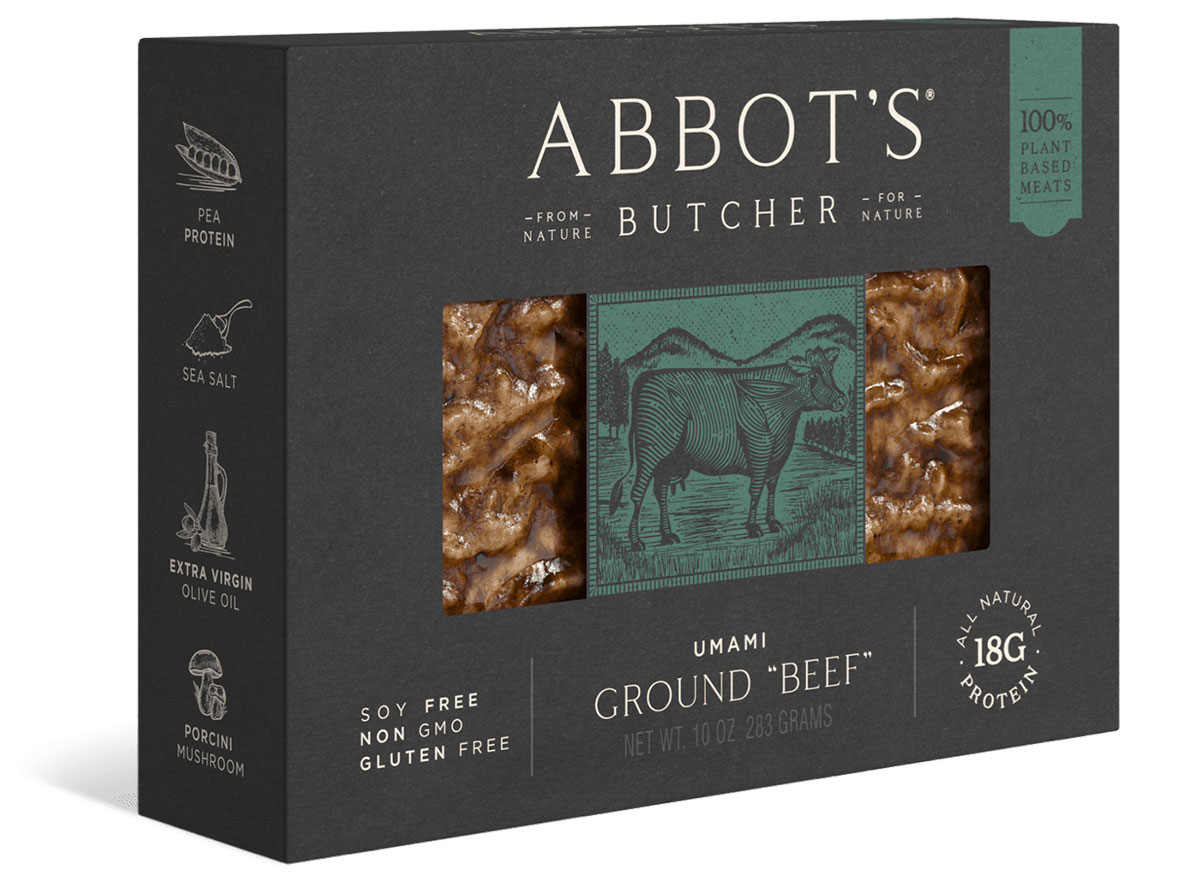 What gives this faux ground beef its distinctive umami flavor? Porcini mushrooms, of course. The meatless ground beef is also made primarily from pea protein, which is what gives it that meat-like texture. Unlike most plant-based meat alternatives, Abbot's Butcher's meatless products are all soy-free (and this particular one is even gluten-free). The sodium and saturated fat contents are both low, yet just one serving still lends 18 grams of satiating protein.

RELATED: The 15 Best Packaged Products That Prove Plant-Based Diets Can Be Delicious.

Note that this is a larger serving size, but still, 11 grams of saturated fat in just one burger? If you follow a 2,000-calorie diet each day, that's half of your day's worth of saturated fat. What's worse, this patty also packs trans fat, which lowers the good kind of cholesterol (HDL) while simultaneously elevating harmful, artery-clogging LDL. 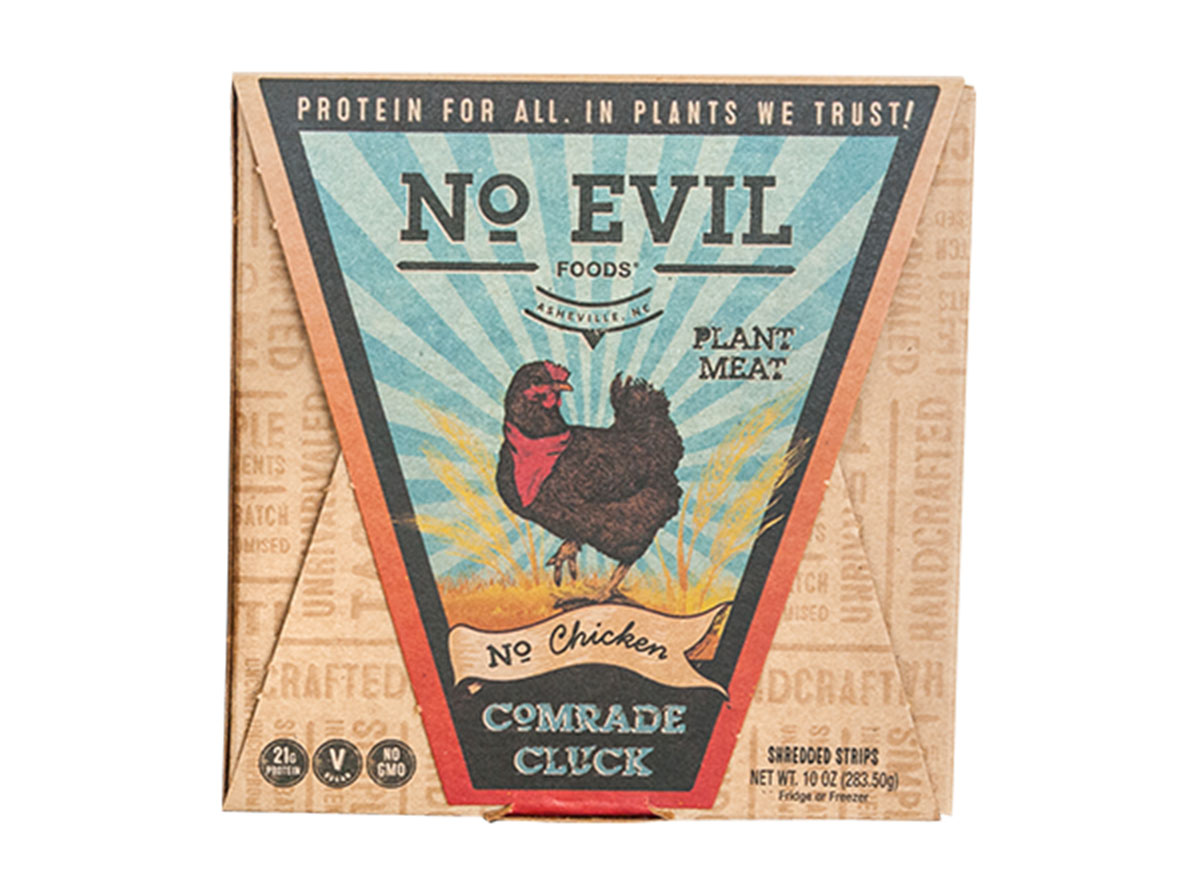 One serving of No Evil Foods' shredded faux chicken contains absolutely no saturated fat, yet packs an impressive 21 grams of protein and even 2 grams of fiber. The secret? Its chewy texture is achieved through a combination of wheat gluten and chickpea flour. The taste is accentuated with organic Shoyu, a sauce made from soybeans and wheat, nutritional yeast, and garlic powder. 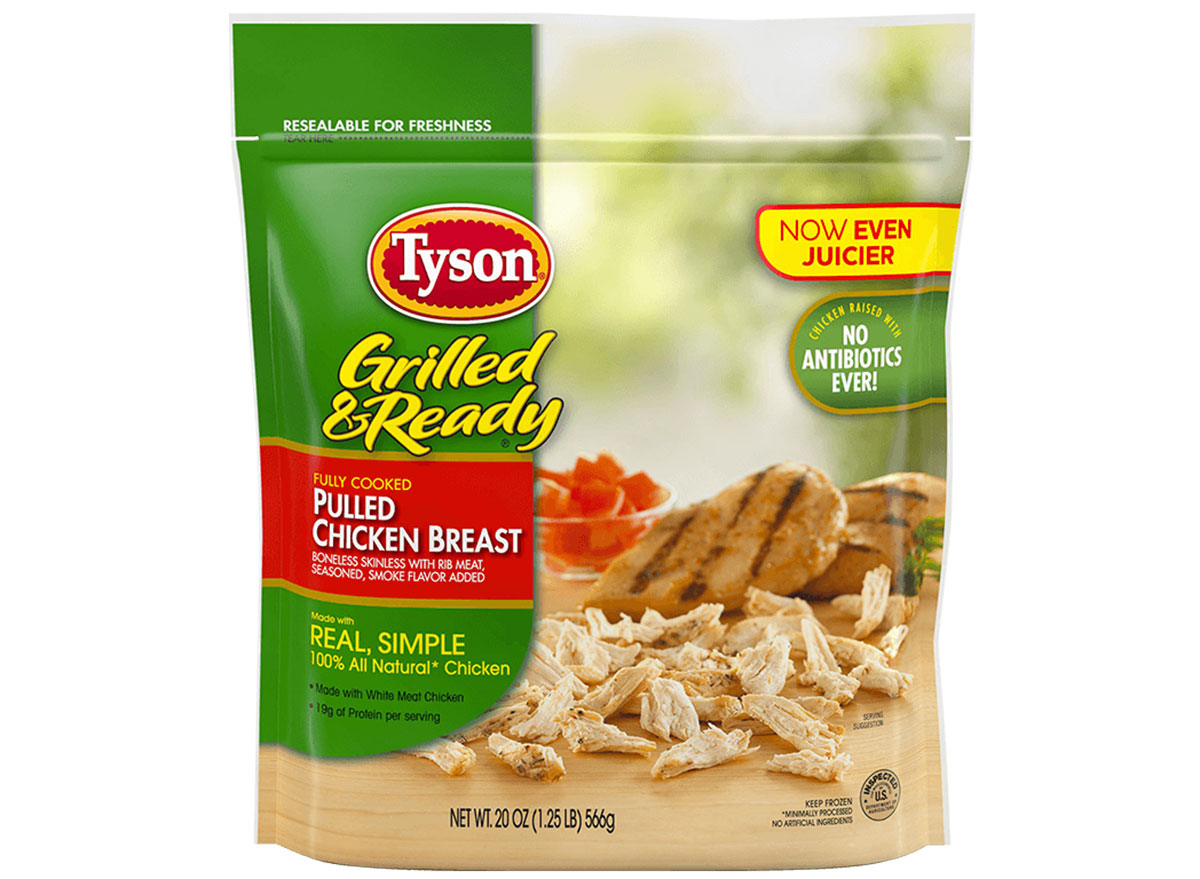 We do appreciate this bag of Tyson indicated the chicken was not fed antibiotics, however, it still lacks in comparison with No Evil Foods Comrade Cluck. This product does contain more saturated fat and sodium yet less protein and, naturally, no fiber. We would argue that based on these reasons alone, chicken—with the exception of it being an inherent source of B-12—may just be nutritionally inferior to its plant-based counterpart. 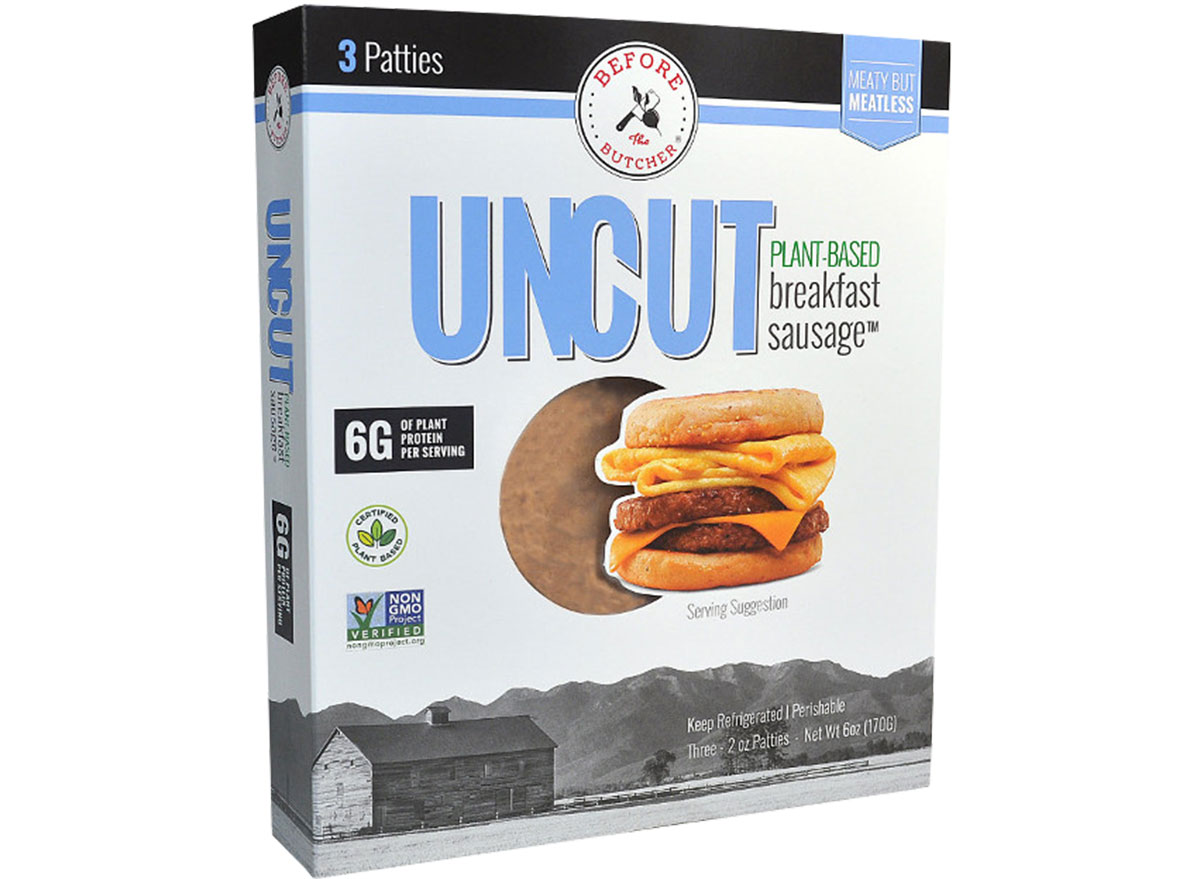 Next time you want to prepare a breakfast sandwich, consider swapping out the sausage patty for a plant-based one like Before the Butcher's. Made with soy protein concentrate and refined coconut oil, you'll still get that desirable sausage-like consistency and rich flavor, just without all of the calories, fat, and sodium.6254a4d1642c605c54bf1cab17d50f1e 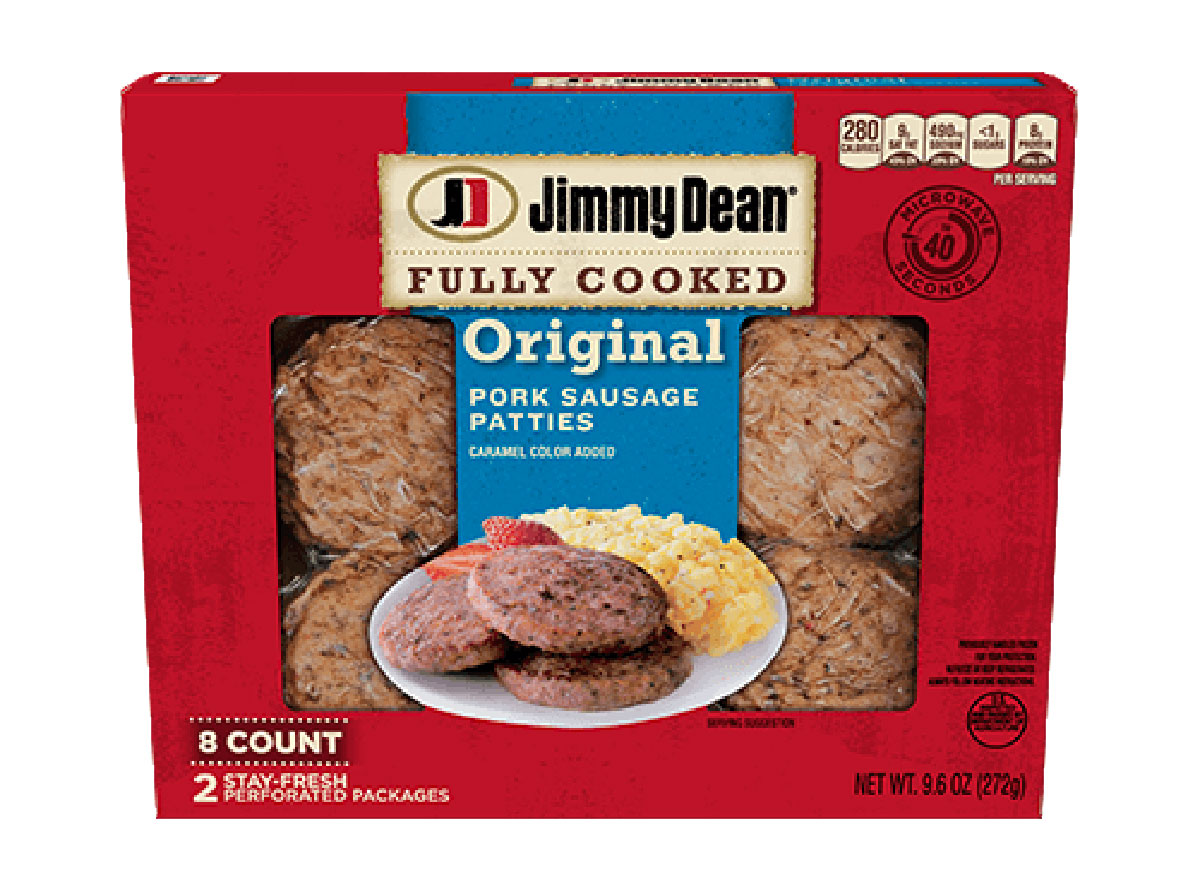 Just two sausage patties contain 9 grams of saturated fat and nearly 500 milligrams of sodium, which is more than 20 percent of the suggested daily sodium intake. Yikes.

Bottom Line: Meatless products are coming to the forefront of sales for a reason. Often, they're much healthier than their meat counterparts.