Even those who've been living with chronic anxiety for a decade reported significant relief by doing this.

Anxiety, or an overwhelming feeling of nervousness, tenseness, and impending doom, as the Mayo Clinic describes it, often feels like it's lurking just beyond every dimly lit corner and unchecked email. Indeed, we're living through uncertain times, and daily bouts of anxious feelings have never been more common. Did you know that as many as one in five Americans believe they're living with an undiagnosed anxiety disorder, according to a 2019 poll?

Many blame modern technology and today's constantly-connected lifestyle for high anxiety rates. It's hard to unwind and relax when breaking news, work emails, and a never-ending stream of social media posts are just a few clicks away 24/7. That being said, it's also likely that certain people are more prone to anxiousness and anxiety disorders than others. For example, this study published in Psychiatric Genetics concludes social anxiety may be genetic.

Whatever the root cause, anyone who has dealt with intense anxiety will agree it's a problem well worth addressing. Anxiety can make even the simplest of tasks feel like climbing Mount Everest. Unfortunately, fighting anxiety can be a challenge. One research project published in The Journal of Affective Disorders actually found that many people living with chronic anxiety tend to become more stressed out and anxious when trying out relaxation techniques like meditation or yoga.

On a positive note, new research conducted at the University of Gothenburg in Sweden and published in The Journal of Affective Disorders strongly indicates there is an all-natural, effective way to fight anxiety after all—even for those living with a chronic anxiety disorder. Keep reading to learn more, and don't miss 3 Major Secrets to Living to 99, According to Betty White. 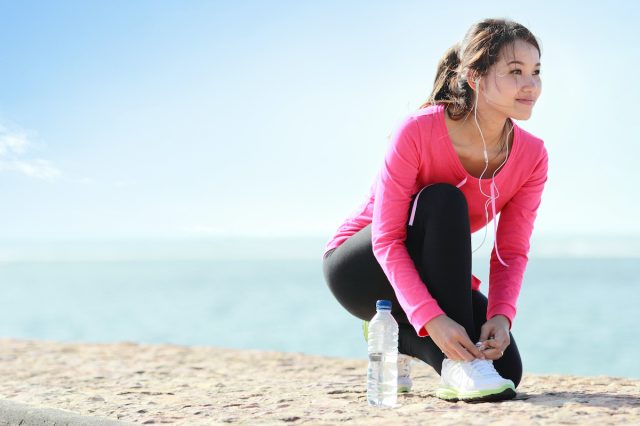 The study authors in Sweden brought together a collection of Swedish adults, all of whom had been diagnosed with an anxiety disorder. After a three-month experimental period in which a portion of participants were instructed to exercise regularly, the ensuing results were compelling. Across the board study subjects who had been exercising routinely reported a major decline in anxious feelings and related anxiety symptoms. Even those who had been living with chronic anxiety for around a decade reported significant anxiety relief.

Importantly, the relationship between exercise and reduced anxiety held up for both moderate and strenuous exercise. You don't necessarily need to work out for hours on end or set your treadmill to the top speed to gain some anxiety relief via exercise.

Related: For the latest health and fitness news delivered to your inbox, sign up for our newsletter!

A total of 286 participants took part in this work, with about half having lived with anxiety for at least a full decade. Most (70%) were female, and the median age was 39 years old. Subjects were randomly separated into three experimental groups. One cohort was instructed to work out at an intense rate three times per week for a total of 12 weeks, and another was told to exercise moderately according to the same schedule. The third cohort served as a control group, and was only given optional recommendations on how often to work out.

Both exercise groups attended tri-weekly 60-minute guided exercise sessions led by a physical therapist. The workouts weren't just a few jumping jacks either. Both cardio and strength training were covered in each session. Each workout began with a warm-up period followed by 45 minutes of circuit training around 12 stations. After that, each session ended with some stretching.

Related: This Workout Is Better for Your Health Than Running

While both varieties of exercise resulted in fewer anxious feelings among participants by the end of the three-month period, more intense exercise does appear to be more beneficial. Those who exercised at a lower intensity level saw their chances of anxiety relief rise by a factor of 3.62. On the other hand, more intense exercisers had better odds (a factor of 4.88).6254a4d1642c605c54bf1cab17d50f1e

"There was a significant intensity trend for improvement—that is, the more intensely they exercised, the more their anxiety symptoms improved," explains first study author Malin Henriksson, a doctoral student at Sahlgrenska Academy at the University of Gothenburg and specialist in general medicine in the Halland Region.

So, if you don't feel like your current exercise routine is helping with anxiety, consider ramping up the intensity gradually. You may find that a harder workout results in more relief.

An all-natural and effective solution

Anxiety is a universal problem, but exercise may be the universal answer. Most anxiety patients today are either prescribed medication or enrolled in cognitive behavioral therapy (CBT). The issue with those solutions is that such drugs don't work for everyone and often come with side effects. Meanwhile, most CBT courses today have long waiting lists for new patients.

Exercise may not necessarily be a 100% cure-all for all anxious feelings, but it does represent an all-natural, easy-to-implement avenue toward anxiety relief.

"Doctors in primary care need treatments that are individualized, have few side effects, and are easy to prescribe," writes study leader Maria Åberg, an associate professor at the University of Gothenburg's Sahlgrenska Academy and specialist in general medicine in Region Västra Götaland's primary healthcare organization. "The model involving 12 weeks of physical training, regardless of intensity, represents an effective treatment that should be made available in primary health care more often for people with anxiety issues."

For more, check out these 5 Foods That May Naturally Lower Anxiety, New Study Suggests.