4 New Menu Items You Can Try at McDonald's Right Now

Festive treats are back!

Things are taking a festive turn at America's most popular fast-food chain. Several holiday favorites are making their anticipated annual return, and you can catch them at your local restaurant for a limited time.

Here's what's new on the McDonald's menu right now. And for more, check out We Tried Every Burger at McDonald's & This Is the Best.

The popular seasonal mocha flavor is back at McDonald's for a limited time. The caffeinated treat can be ordered hot or cold and follows a tried-and-true flavor formula: coffee + peppermint chocolate syrup + whipped cream + more syrup on top.

Although the drink usually makes an appearance on the McDonald's menu every year, 2019 was an exception. Instead of the beloved mocha, the chain opted to test out a different holiday beverage with the Cinnamon Cookie Latte, which prompted rumors that the mocha was a discontinued seasonal menu item. But we're happy to report that this isn't the case.

With the return of the festive winter season comes a new pie flavor, too. The Holiday Pie started popping up on McDonald's menus in Illinois, Texas, and Ohio, while the chain confirmed on Twitter last week that it "won't be long" before it makes a nationwide return. The pie is a seasonal treat beloved by many, and just like Santa, it only makes one appearance a year—in December.6254a4d1642c605c54bf1cab17d50f1e 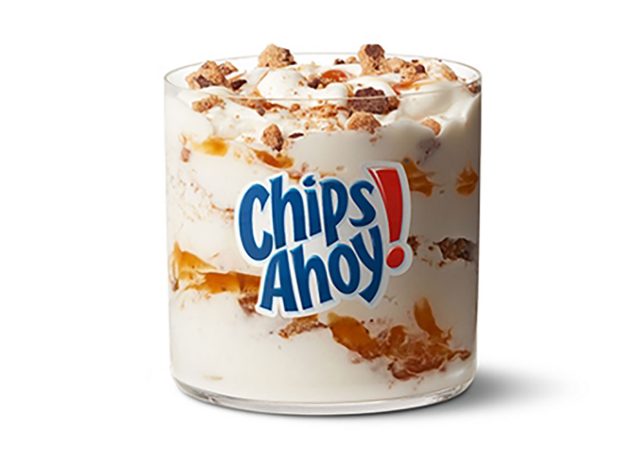 When it was first introduced in 2020, the Chips Ahoy! McFlurry quickly became a customer favorite. In fact, the chain experienced a shortage of the popular dessert only a few weeks later. Luckily, Mickey D's decided to bring it back for an encore in October of this year, and by the looks of it on Twitter, the Chips Ahoy! McFlurry is still a highly sought-after item (some have even speculated it might be the best McFlurry flavor ever.) While this is a limited-time offer, it's still available at some of the chain's locations nationwide.

After a long wait, McDonald's first foray into plant-based meat is here. The McPlant is currently being tested at eight restaurants, including in Irving and Carrollton, Texas, Cedar Falls, Iowa, Jennings and Lake Charles, La., and El Segundo and Manhattan Beach, Calif. Pending a successful operational integration into the chain's kitchens, we can expect a nationwide rollout of the new burger soon.