Walmart Was Just Ranked Dead-Last In This Customer Survey

When it comes to the pageantry of the American Customer Satisfaction Index (ACSI) retail study, big names compete in different categories and are judged by customers. The General Merchandise category has sprung winners like Costco, Target, and Nordstrom. Best Supermarket typically goes to Trader Joe's, which customers adore for its rotating selection. Walmart, however, isn't winning anywhere.

The department store giant came in last place in ACSI's categories for General Merchandise, Drugstores, Supermarkets, and Online Retailers — suggesting thousands of customers are less than satisfied with Walmart's shopping experience. On average most supermarkets and grocery stores received a score of 76. Walmart's score was only 70 in that category, even managing a -1% change from last year. In Online Retail, which Walmart scored the highest (72), the average was 77 for other brands.

Related: These Are Costco's Most Popular Items Right Now

In the General Merchandise Retailers category, Walmart scored a 71, with an average score for most retail stores at 75. Only Kroger tied in last with the mega-store giant here, which lost its one-point advantage from last year. Costco, however, took home the win, topping the charts at 81 points. 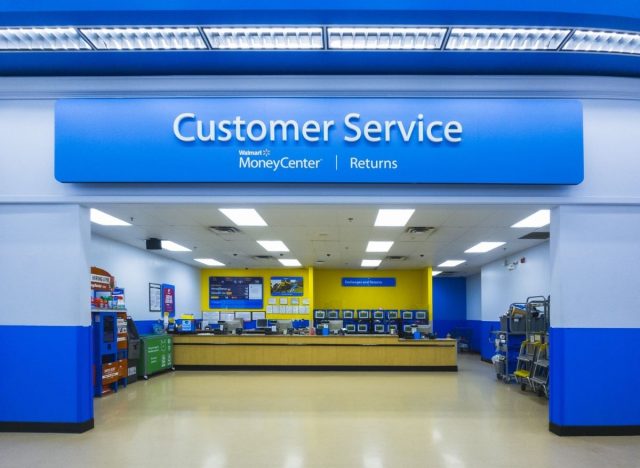 The American Customer Satisfaction Index retail study is based on interviews with 36,517 customers, chosen at random and contacted via email between Jan. 11 and Dec. 20, 2021. Scores are an average are calculated by considering different weights for parameters and industry standards. Parameters include customer expectations, perceived quality and value, customer complaints, and customer loyalty.

Walmart is the world's largest retailer, with an expansive number of stores spread across the United States. There are nearly 5,342 Walmart locations of varying sizes and styles in America. Compared to Target, which has fewer than 1,931 stores, convenience is a big draw to the store. If Walmart's popularity keeps dropping, however, customers may find themselves driving a little further to get to the Target or Costco stores they love.

All is not quiet on the retail front. Check out: Walmart Is Closing Some Locations For These Reasons.

To get all the latest Walmart news delivered right to your email inbox every day, sign up for our newsletter!

Amber Lake
Amber Lake is a staff writer at Eat This, Not That! and has a degree in journalism from UNF in Jacksonville, Florida. Read more about Amber
Filed Under
Groceries // Grocery Shopping // Grocery Stores // News // Walmart