We Tested 11 Protein Bars, and This Is The Best

Discover which of your favorite protein bars should be barred from your diet.

Protein bars have easily become the portable, dessert-like treats that have gotten you through the worst of times (when your tummy develops that baritone roar) and the best of times (when you crushed your squat PR at the gym). But not all bars are created equal, and if you choose the wrong one, you may as well be eating a Snickers. Some bars have as much sugar and fat as a candy bar, and others contain more calories than you should eat between meals. In order to help you make the right choice for your healthy snacking needs, we rounded up the best and the best of the worst bars and graded them based on Nutrition, Clean Ingredients, Appearance and Texture, and Taste.

Read on to find out which portable proteins made the cut, and then check out why some bars (along with other sneaky culprits) made our list of unhealthiest foods on the planet.

Here are the four metrics we used to determine each bar's final grade.

Protein bars can work as excellent meal replacements, post-workout muscle fuel, or even as high protein snack that gets you through the 2 p.m. slump. But some grab-and-go picks are packed with enough sugar to cause a crash or way too many calories to be considered a snack. That's why we've outlined each bar's nutritionals for you to decide if they fit with your goals.

Many bars contain a bunch more than just "chocolate peanut butter" or "salted caramel cashew," which is why the ingredient police is here to summon all the fattening offenders out of your lunch bag, and dangerous additives.

If you don't want to look at it, why would you want to taste it? We all have some sort of expectations regarding whether the bar is embellished with a chocolate drizzle or just happens to melt in your mouth like meringue.

This one's a given. We can't rate a bar too high if it scores A+ in nutrition, clean ingredients, appearance and texture, and then falls flat for taste.

Ranked From Worst to Best 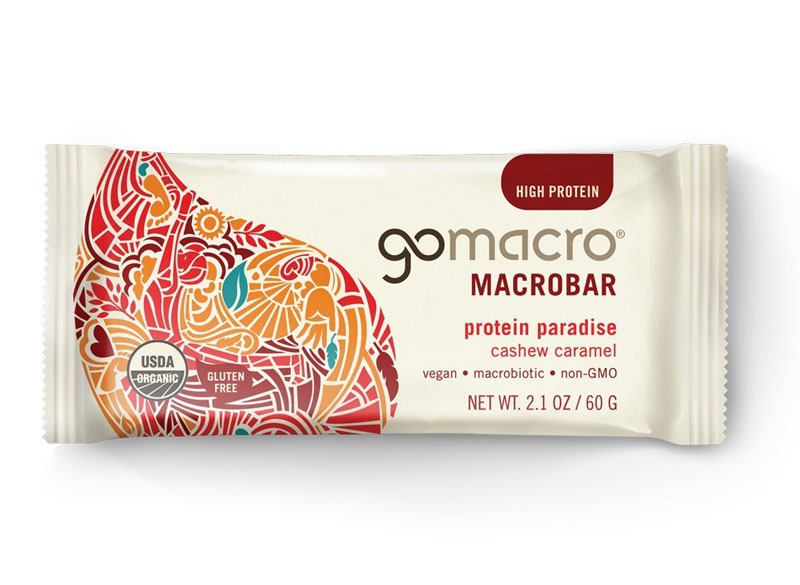 Appearance & Texture: This bar is flatter and wider than all of the others tested and was noticeably chewy and hard to break apart, which means that it's probably not meant for sharing.

Taste: Before biting into this bar, we noticed that its smell was quite reminiscent of Ikea's cinnamon rolls. It tastes like creamy cashews with a hint of cinnamon, although it wasn't very sweet despite the 11 grams of sugar it packs in.

GoMacro Macrobar Protein Paradise in Cashew Caramel didn't exactly deliver the tropical escape it promised. It lacked memorable taste and totally missed out on any smooth caramelly flavor notes. What bummed us out most was that organic brown rice syrup (a modified sugar with an obesity-inducing glycemic index of over 100!) is the first ingredient listed. Another not so sweet factor? This gluten-, soy-, and GMO-free pick boasts a high 30 grams of carbs, of which only one gram is fiber and 10 grams are sugar—the equivalent of a Krispy Kreme Original Glazed Doughnut! 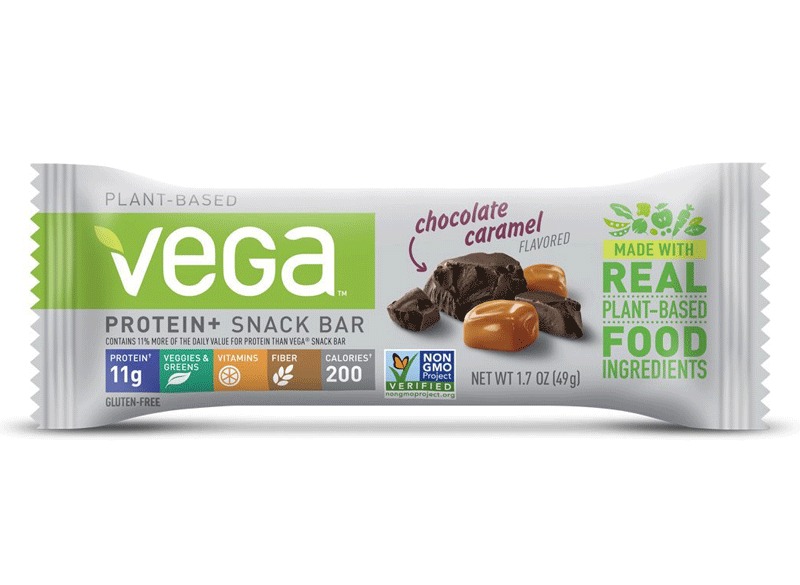 Appearance & Texture: The first thing we noticed is that the Vega Protein+ bar had a chocolate drizzle and scattered nut pieces on top, which obviously looked yummy, but the artificial caramel scent deterred me from wanting to take a bite. Once I did, it was very chewy, just like real caramel.

Taste: Rather than boasting a chocolatey taste, this pick had a distinct peanutty caramel flavor that was accompanied by a chalky aftertaste.

The lack of chocolate was disappointing and so was the inclusion of brown rice syrup and agave syrup, which has a high fructose content (and that's linked to liver and kidney disease, high blood pressure, and even premature aging). For just 11 grams of protein, you can find a better bar that won't potentially tax you with the aftermath of funky ingredients. 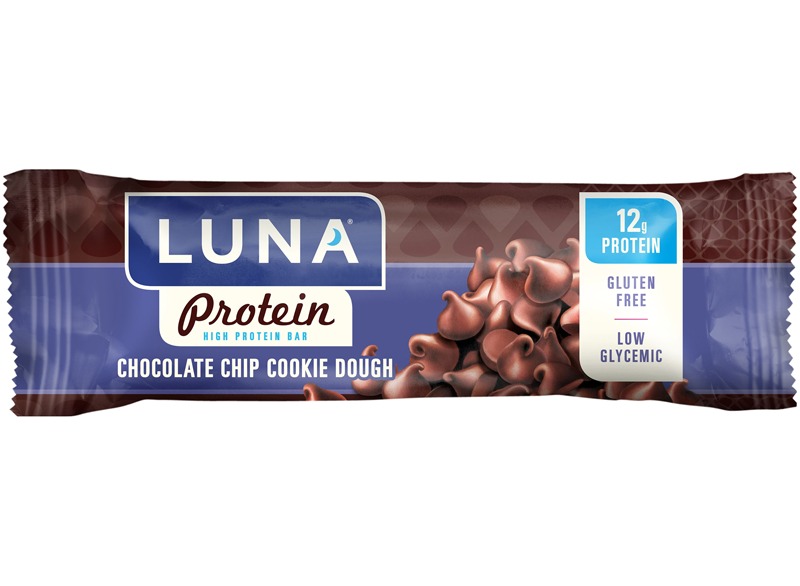 Ingredients: This bar is primarily made with soy protein isolate, with extra protein coming from whey protein concentrate and macadamia nut butter. It's sweetened with organic cane syrup and organic dried cane syrup.

Appearance & Texture: The fact that this looked like a Twix bar was already building sky-high expectations—and the super chewy, teeth-sunk-in texture delivered.

The over-sweetened cookie dough flavor fell a little flat and we didn't like that Luna threw in multiple types of sugar, including dried cane syrup, which is one of the worst sweeteners as well as alkalized cocoa (AKA "Dutch processed") which basically means that the cocoa's natural acidity is reduced by an alkalizing agent, which also minimizes its flavonoid and polyphenol content significantly. 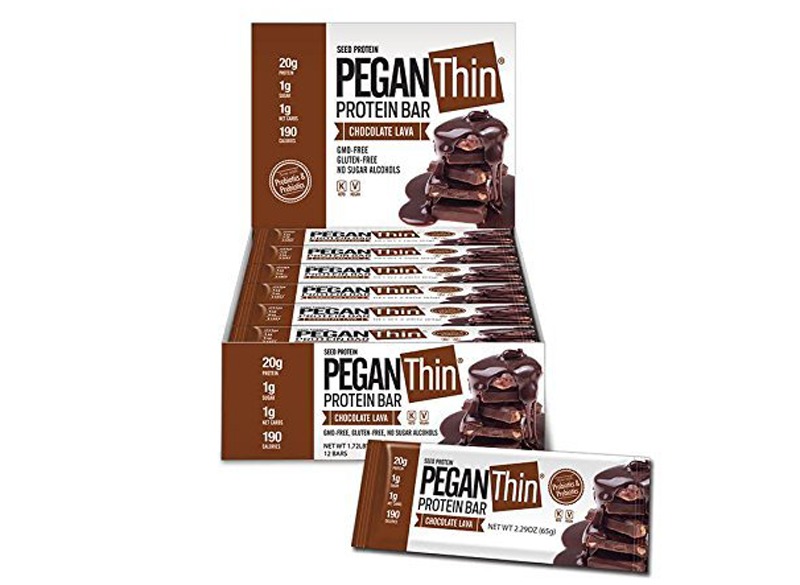 Appearance & Texture: One thing that was super odd was that this bar was oil-slicked and almost slipped out of its packaging. (Since when are protein bars greasy?!) Another drawback: it looked as dense as its texture.

Taste: Just like many chocolate protein powders, Pegan Thin has a very chalky flavor and harsh sweetener aftertaste. The worst part is probably the fact that it lacked any true cocoa flavor.

Although it boasts an impressive 20 grams of protein and even more striking 26 grams of fiber, in addition to gut-balancing probiotics, we're sad to report that it tasted nothing like molten lava cake. (insert crying emoji here.) If you can stomach the odd powdery taste for the sake of this bar's bountiful benefits, we're giving you the green light. 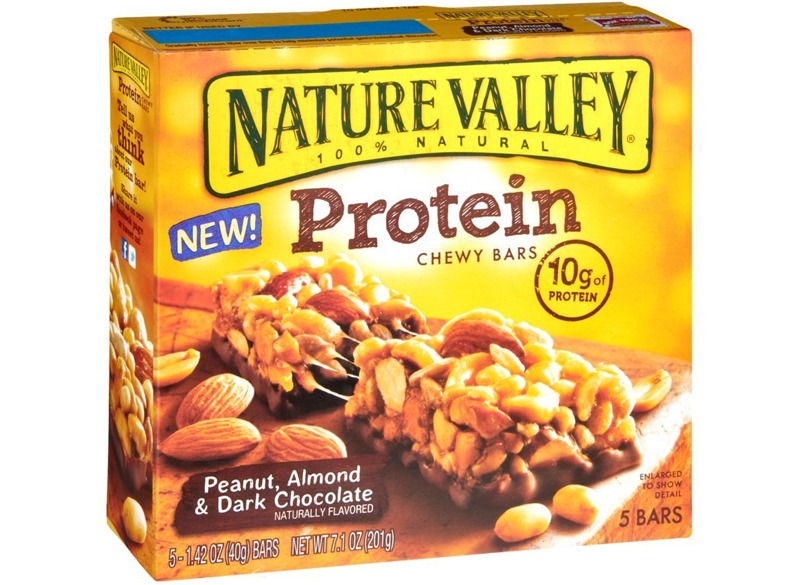 Ingredients: This bar is primarily made out of peanuts, almonds, and sunflower seeds, with extra protein coming from soy protein isolate and whey protein concentrate. It's sweetened with sugar, corn syrup, fructose, glycerin, and dextrose, and bound together with a blend of vegetable oils.

Appearance & Texture: This had an appealing chocolate layer supporting the nutty layer on top. It also delivered a satisfying crunch thanks to the roasted peanuts, almonds, and sunflower seeds.

Taste: I didn't expect to like this compressed trail mix so much as I did: it balanced both the sweet and the salty as well as packed in a rich, chocolate foundation that was absolutely delicious.

While we're complete fans of the flavor, this bar didn't really impress us with its addition of dextrose or fructose, which turns into fat, inflammatory compounds, and causes metabolic disorders such as insulin resistance, high cholesterol and triglycerides, belly fat accumulation, and heightened blood pressure. Plus, Nature Valley blends a slew of belly-busting vegetable oils that aren't any better than the sea of added sugars. 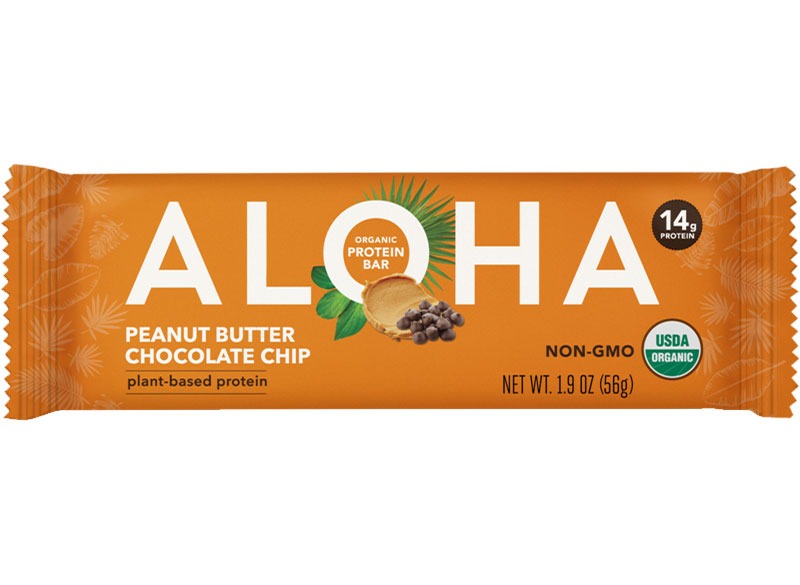 Ingredients: This bar is made primarily of organic peanuts and organic pumpkin seed protein as well as organic pea protein. It's bound together with organic tapioca syrup and sweetened with organic semi-sweet chocolate chips and organic date paste.6254a4d1642c605c54bf1cab17d50f1e

Appearance & Texture: As of the moment I unwrapped this Aloha bar, I was hit with a whiff of peanut butter—which obviously isn't the worst thing in the world. The texture was as rich as jelly's salty BFF and even had delightfully crunchy pieces of peanuts and chocolate chips throughout.

Taste: This PB-colored bar tasted exactly like its first ingredient and lacked even the slightest cocoa hints.

The PB flavor overpowered the chocolate significantly to the point where Aloha should've just omitted the missing flavor to cut down on sugar. Overall, it's a bit too high in calories, sugar, and sodium for us to rank it any higher. 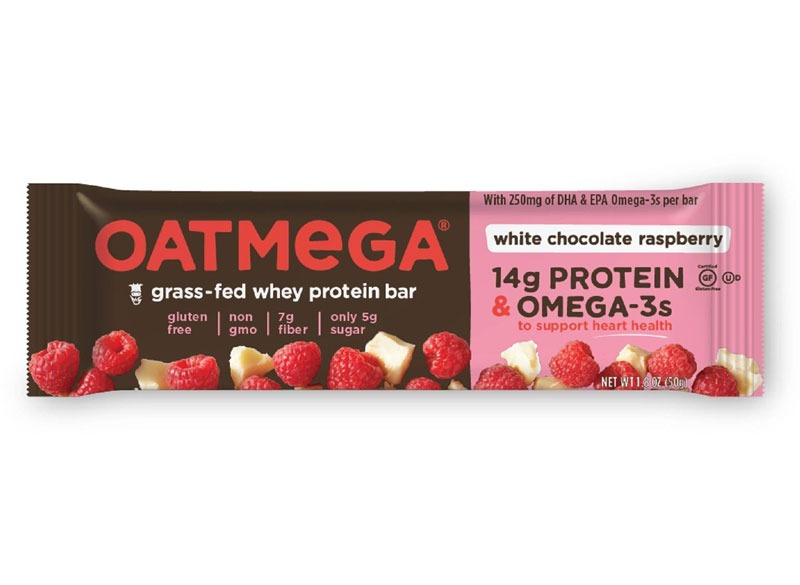 Appearance & Texture: Woah, that squint-inducing artificial fruit scent had me convinced this treat would taste more like a Sour Patch Kid, despite its crispy texture.

Taste: rather than white chocolate, Oatmega's bar tasted like artificially sweetened vanilla and nothing like antioxidant-rich raspberries.

Taste-wise, this pick didn't please our critical taste buds. Nutrition wise, we like that it packs in pasture-raised, grass-fed whey and a decent amount of fiber and protein for under 200 calories. Oatmega also throws in heart-friendly omega-3s, so if you're not a fan of this flavor, don't knock it before you try the brownie crisp or chocolate coconut crisp! 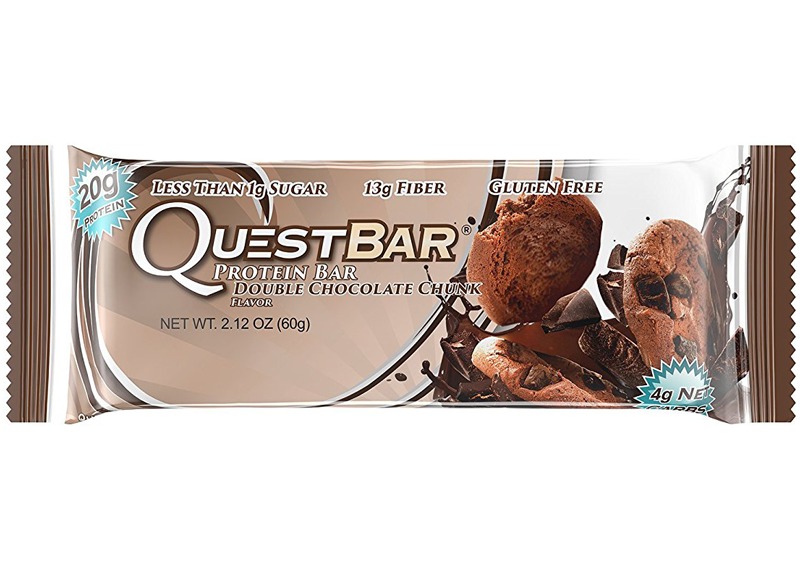 Ingredients: This bar's protein blend is made of milk protein isolate and whey protein with extra protein coming from almonds. It's sweetened with erythritol and stevia.

Appearance & Texture: It resembled a bean-based brownie and proved to be consistently dense without any pop of crunch or silky smoothness you'd expect from chocolate. The texture was crumbly sans chocolate chunks.

Taste: If this is Quest's version of a brownie, it really didn't follow through. The taste wasn't necessarily unpalatable, we just expected a more indulgent chocolatey kick that wasn't so similar to gritty protein powder.

Although erythritol sounds like the product of an odd science experiment, this sweetener is actually good for you! Since it's naturally found in nature (in grapes, pears, melons, and even mushrooms), this fructose-free sweetener doesn't cause the same digestive problems as other sugar alcohols or raise blood glucose levels. Although this all sounds dandy, the flavor wasn't so much so, but we'll snack on this impressive fiber- and protein-packed bar any day. 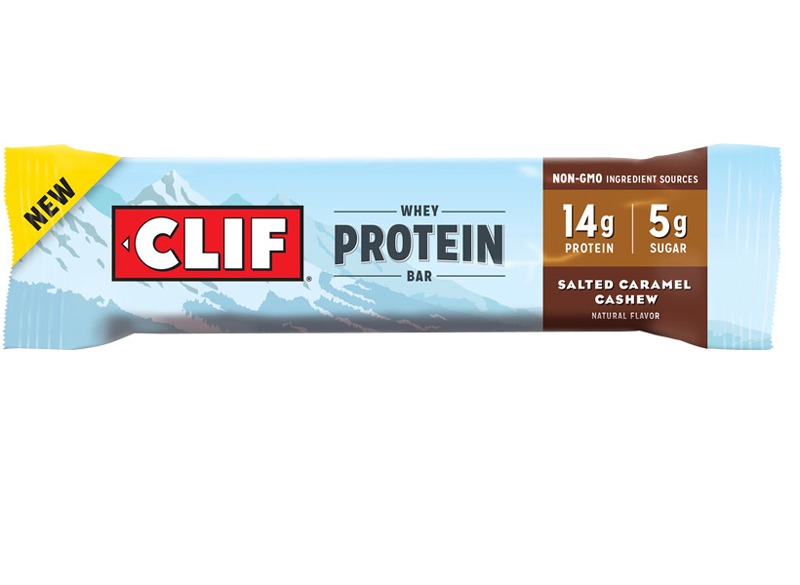 Appearance & Texture: Let's just say, the nut-spiked top resting on a bed of chocolate was very inviting. It even smelled like Crème brûlée. Oh, and it's crispy. Simply put, we have very high hopes.

Taste: Is this a Rice Krispies Treat or a protein bar? Because we really can't tell the difference! The chocolate and caramel took center stage while the cashew struggled to make its cameo.

Clif nailed the nostalgic cereal-like flavor, and with 14 grams of protein and only five grams of sugar, we can definitely agree that this bar "has what you want to get you to your next adventure." The only downside is that that the adventurous founders of this treat decided to throw palm kernel oil into the mix, which has been shown by numerous scientific studies to raise total cholesterol as well as LDL cholesterol levels. 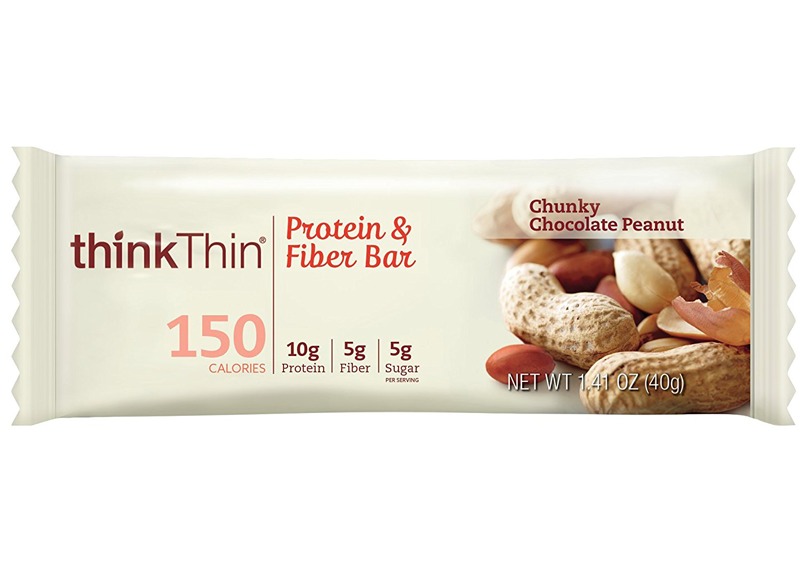 Appearance & Texture: This chocolate-coated bar smells like candy and we appreciate the decorative chocolate ripples on top. The texture: wonderfully chewy, although we expected some chunks after reading the flavor on the label.

Taste: YUM, I believe, is an adequate description. The bar was barely sweet, with both delicate peanutty and dark chocolate flavor notes. I devoured the whole thing.

Given the non-GMO bar's Goldilocks taste and texture, and a satiating 10 grams of protein and five grams of fiber (for only 150 calories!) as well as added vitamins and minerals, this snack is straight out of a storybook. 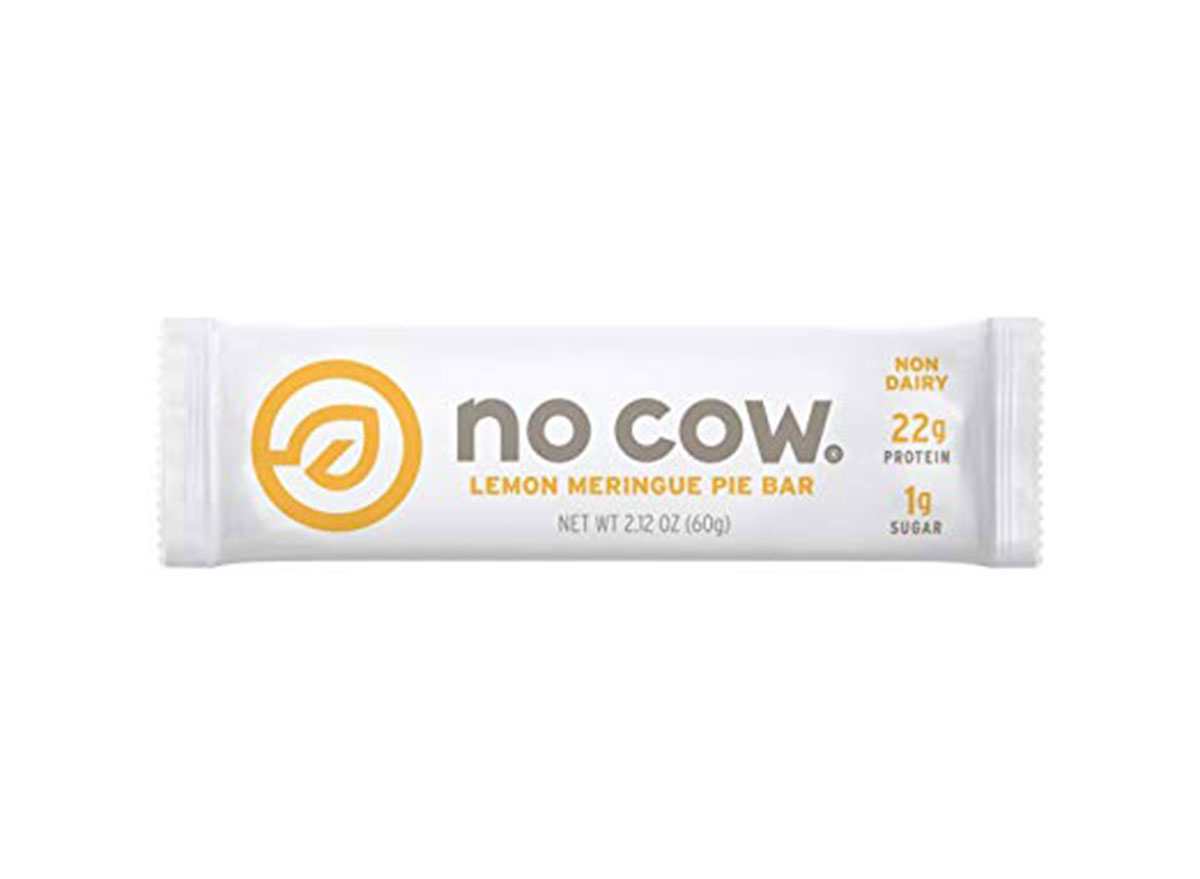 Ingredients: This bar is primarily made of brown rice protein and pea protein and packs in extra protein from almonds. Its sweetness comes from erythritol, monk fruit extract, and stevia.

Appearance & Texture: Thankfully, the super lemony scent wasn't so much like Windex and the bar's color matched the hue of lemon meringue pie crust, and so did the consistency.

Taste: This is where the bar won us over. It literally tasted like lemon meringue, and with only one gram of sugar (in addition to calorie-free natural monk fruit and antioxidant-rich erythritol) and zero animal products such as eggs or butter (it's all plant protein, hence the name "No Cow"), we were beyond blown away!

It was love at first bite. This invigorating bar isn't too sweet or salty, has no weird sweetener aftertaste (major points!), and has beyond stellar nutritionals (just look at that protein, sugar, and fiber count!). Although don't expect a silky smooth texture—this bar boasts a bit of a bite and crumbles in your mouth just like baked crust.