10 Side Effects of Drinking Soda Every Day

Is it really as bad as some say? We asked the experts.

America is obsessed with soda. The sweet, carbonated beverage is the drink of choice for more than half of us on a daily basis. Unfortunately, soda is loaded with added sugars that lead to health issues. Ultimately, you may want to rethink your drink due to some of these negative side effects of drinking soda.

"According to the Centers for Disease Control and Prevention (CDC), sugar-sweetened beverages are a leading source of added sugars in the American diet," says Jerlyn Jones, MS, MPA, RDN, LD, CLT, registered dietitian nutritionist and spokesperson for the Academy of Nutrition and Dietetics. "The latest CDC statistics found between 2011 to 2014, six in 10 youth (63%) and five in 10 adults (49%) drank a sugar-sweetened beverage at any time."

According to Jones, you should choose the following beverages more often when you're thirsty:

Here are the side effects of drinking soda every day, and for more healthy tips, be sure to check out our list of The 7 Healthiest Foods to Eat Right Now.

It can lead to weight gain.

"Sucrose in drinks interrupts our hormones and prevents us from feeling full due to the calories we have ingested," says Amy Shapiro, MS, RD, CDN, registered dietitian with Daily Harvest. "Therefore we tend to eat on top of the calories consumed by soda and this can lead to obesity and other diseases in time."

"The average 12-ounce can of soda provides about 150 calories,and 10 teaspoons of added sugar," says Jones. "The recommended daily intake of added sugar for men is no more than nine teaspoons (150 calories), and six teaspoons for women (100 calories). If you drink 12 ounces of soda daily and don't cut back on other calories in your diet, you could gain up to five pounds in a year. Five pounds in a year may not seem like a lot, but it does add up over the years."

Here are the Soda Habits That Are Shortening Your Life, According to Science.

It can lead to less nutrition overall.

"Soda has little to no nutritional value but does contain calories and lots of sugar," says Audra Wilson, RD, a registered bariatric dietitian at the Northwestern Medicine Metabolic Health and Surgical Weight Loss Center at Delnor Hospital. "Over time, the inclusion of soda in your diet will lead to the exclusion of other, healthier drink and food options. A more varied diet is a healthier diet and doesn't it feel better to eat calories than drinking them?"

Here are the 28 Unhealthiest Sodas That Are Never Worth Drinking.

It causes tooth decay and cavities.

"Sugar doesn't directly harm teeth. Different types of bacteria living on and around our teeth feed on the sugar in sweet beverages and grow," says Jones. "Plaque allows bacteria to stay on the teeth longer until eventually, the bacteria make acids, which wear down the tooth enamel and cause cavities. Bacteria can also lead to other serious gum diseases such as gingivitis and periodontitis. According to a CDC report, more than half of teenagers in the United States have had cavities in their adult teeth. In addition to sugar in sweetened beverages, there are acids that are also harmful to the teeth. These acids lead to dental erosion or tooth wear. Good oral health enhances a person's ability to consume nutritious foods without discomfort or pain."

Here are 12 Foods and Drinks to Avoid If You Have Sensitive Teeth.

It can cause liver problems. 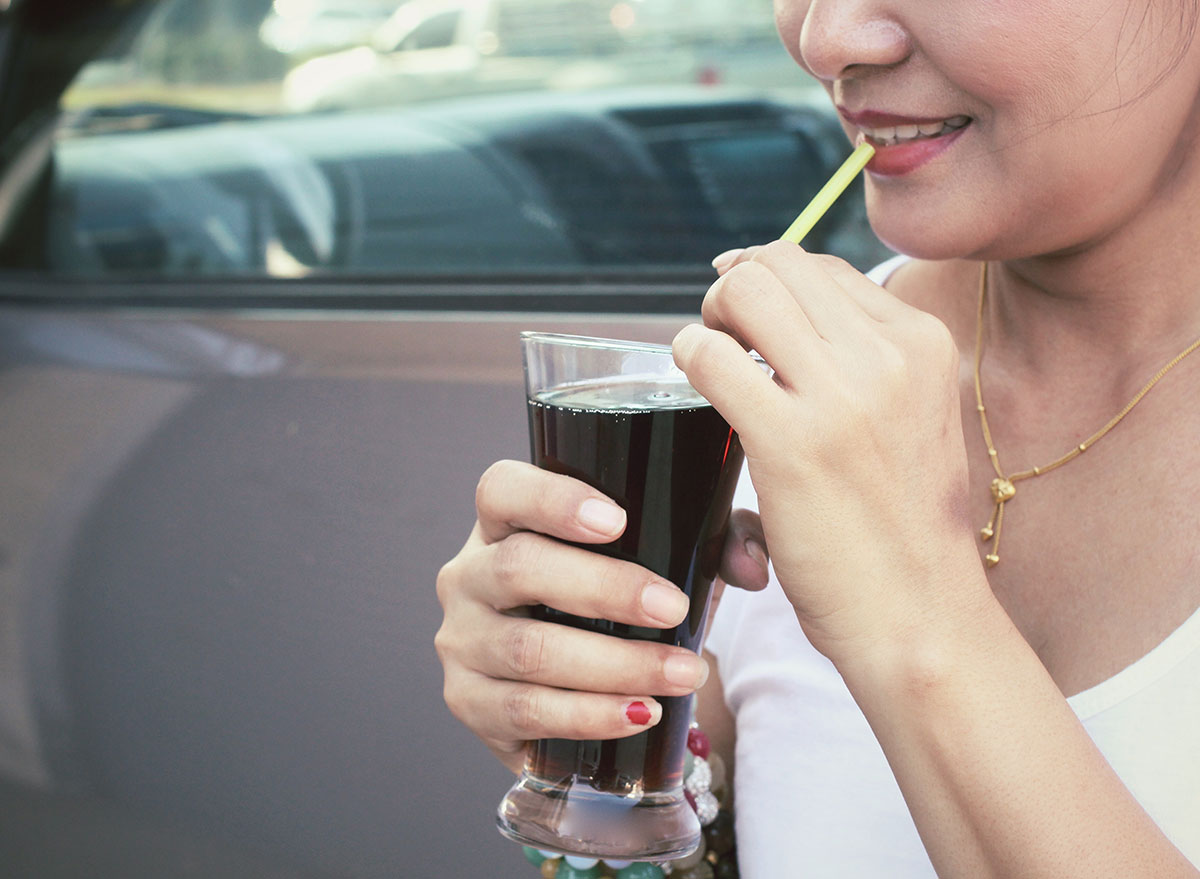 "Excess sugar is turned into fat in your liver, which over time can lead to non-alcoholic fatty liver disease, making it hard to help your body naturally detoxify," says Shapiro. "Soda is often high in high fructose corn syrup, which gets processed through your liver. With too much, it gets overloaded and stored as fat."

It can lead to depression.

"A 2010 study of nearly 5,000 South Australian adults showed a positive association between high soda consumption and mental health problems including depression," says Jones. "These findings have significant public health importance, given the millions of adults who consume soda frequently, and even on a daily basis. The study examined the participants' soda intake. Those who consumed more than half a liter (16 ounces) of soda per day had approximately 60% greater risk of having depression, stress-related problems, suicidal ideation, psychological distress, or a current mental health condition, compared with those not consuming soda. Although soda consumption in the United States has decreased, given the high prevalence of anxiety and depression among adults, especially young adults, there is a strong need for additional studies in this direction."6254a4d1642c605c54bf1cab17d50f1e

These are the 17 Foods That Make Your Depression and Anxiety Worse.

"The average sugar-sweetened soda contains about 40 grams of sugar which translates into roughly 10 teaspoons per 12-ounce can—that's almost one teaspoon of sugar per ounce," says Wilson. "The American Heart Association recommends no more than 25 grams of added sugar per day for women (around 36 more men), so with only one can of soda, an average woman will have exceeded that recommendation by more than 50%. This will likely lead to weight gain over time and increase the risk of developing diabetes."

It is the leading cause of type 2 diabetes.

"Excessive fructose intake has been seen to lead to diabetes mellitus, and since soda contains high fructose corn syrup, research shows even consuming one regular soda per day can lead to type two diabetes," says Shapiro.

Adds Jones, "In a 2010 meta-analysis study, people who regularly consumed 1-2 cans a day or more of sugary drinks have a 26% higher risk of developing type 2 diabetes than people who don't have sugary drinks as often. Risks are greater in young adults and Asians."

It can lead to heart disease.

It can be addictive.

"Research shows the brain responds to sugar as it releases dopamine. Over time we require more and more to feel the same pleasure," says Shapiro. "Soda is high in sugar and for individuals with addictive behaviors, soda can be an addictive substance for them due to the high sugar content."

It may make you more likely to become obese.

"A recent study showed that those who drank sugar-sweetened beverages (like soda) with a genetic predisposition toward obesity were more likely to actually become obese," says Wilson. "Genetics can only predict a tendency and this study illustrates how specific health-related choices and behaviors can promote that genetic predisposition, but do not have to."

Here are the 108 Most Popular Sodas Ranked by How Toxic They Are.