Every Subway Sandwich—Ranked for Nutrition!

Just because Subway leads the pack as one of America's healthiest fast-food chains doesn't mean every sub is a nutritional winner.

When it comes to Subway nutrition, you know the brand's commitment to providing affordable, healthy food is undeniable. In 2014, the chain removed the dough conditioner azodicarbonamide from its breads after public outcry over the same ingredient being used in yoga mats. The chain even one-upped consumers and increased its whole-grain bread options.

In 2015, not only did the sub company announce they were weaning off antibiotic usage in their chicken, but they also set a timeline for acquiring antibiotic-free pork and beef (which are much harder to come across than chicken) as well as cage-free eggs.

And finally, in 2017, when a Canadian company published a study claiming that Subway's chicken was only made of 50 percent chicken DNA, Subway fired back with two independent studies (which, unlike the broadcasting company's, were conducted with tests designed to measure food composition) showing that their chicken is made from 100% white chicken and contains less than 1 percent soy protein. And Subway says all its chicken is raised without antibiotics and is free of artificial flavors and preservatives.

Even though Subway has had to scrub its reputation clean more than once, the company has always emerged more nutritionally sound. That said, you can quickly run into trouble if you assume every offering at the sandwich shop is good for you. Here's how to navigate the nutritional nuances of Subway's mix-and-match menu. Picking the right meats is paramount — otherwise, you won't reap the benefits of all the veggies you're about to load on top. And if you're more of a homemade kinda person, don't miss our exclusive guide on best and worst packaged deli meats. 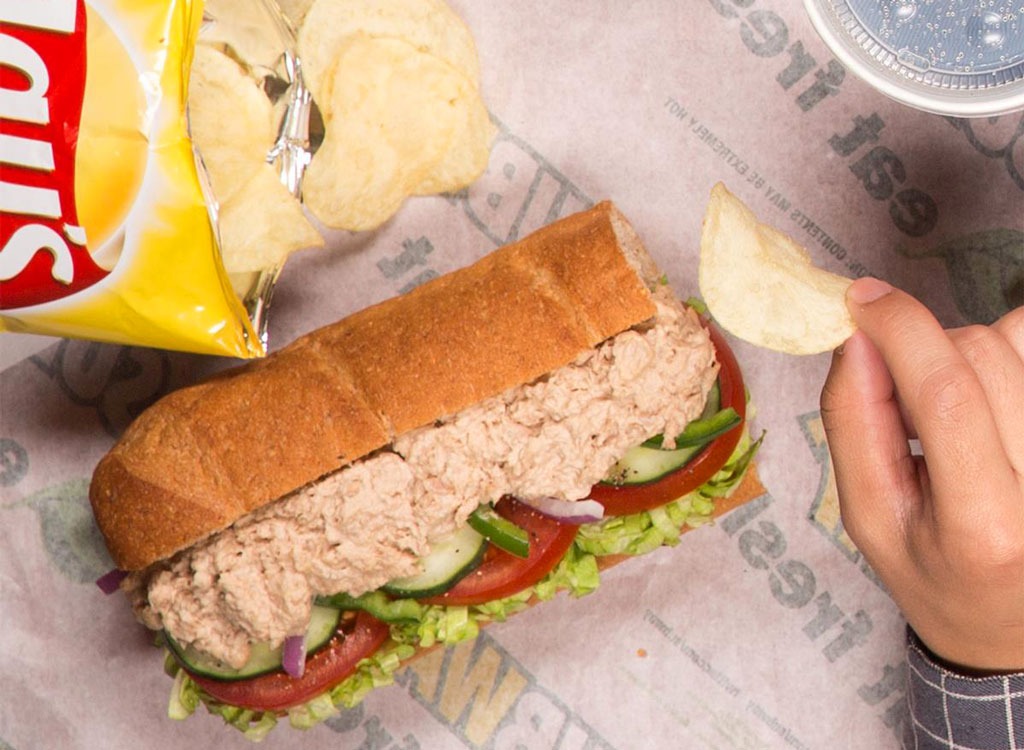 Subway gives customers the option of ten different breads flatbread and three different wraps, but we chose the default option that's automatically selected by Subway, which we'll note for each sub. To simplify things even more, we gathered nutritionals for a 6-inch sub (they also serve footlongs). Unless otherwise noted, each sub is prepared with cucumbers, green peppers, lettuce, red onions, spinach, and tomatoes and is not served with cheese or any dressing.

For our ranking of subs, we primarily looked at calories, sodium, and fat. Bonus points were awarded for protein, and any ties were broken upon closer inspection of an item's ingredient list and nutrients.

A Note on Condiments:

Although we didn't rank based on condiments, we recommend topping your sub with Vinegar and Olive Oil Blend, which adds just 45 calories, 5 grams of healthy fats that will help your body absorb the fat-soluble vitamins from the veggie toppings, and no extra sodium. On the other hand, avoid caloric options like Mayonnaise, Ranch, and Chipotle Southwest, which can add at least 100 calories to your sandwich.

Sorry, Subway, but this monstrosity is worse than eating a Big Mac from McDonald's. (One of the worst menu items at the fast food chain). A single sub has 40 percent of the total grams of fat you should eat in an entire day, according to FDA recommendations. Not to mention, it also exceeds half your day's recommended intake of sodium.

For a sub with no cheese, this Spicy Italian sandwich is very high in fat and saturated fat. In fact, it will fill you up with 45 percent of your daily value of saturated fat in just 6 inches.

This sandwich has more sugar than five Oreos! We bet you weren't expecting your lunch to be sweeter than a sleeve of cookies. The teriyaki glaze is one of the last remaining Subway offerings that still uses preservatives — not really in line with their "Eat Fresh" motto.

It's Subway's best-selling sandwich, but it's higher in fat, saturated fat, and sodium than the other offerings, so you should reserve this sub for a once-in-a-while treat. P.S. Did you know the B.M.T. originally stood for Brooklyn Manhattan Transit? Makes sense since Subway is named after, well, you know, a subway. Now, they claim it stands for "Bigger, Meatier, Tastier".

You may typically associate "turkey" with lean meats, but this sub is a triple threat when it comes to sodium. It's also severely lacking in the protein department compared to other offerings. If you like turkey, you're better off with our number 1 pick below.

Sorry, but eating the carb-laden sandwich isn't going to tide you over more than an hour. You could argue this sub must be rich in fiber-rich veggies, but it actually has less fiber than the sub below. And that's made out of meatballs! If you really want the Veggie Delite, do what Amy Shapiro, MS, RD, CDN, Real Nutrition NYC does: "I add guacamole since it is anti-inflammatory, provides extra calories from heart-healthy fat, and fiber for more staying power and tons of flavor."

It might sound weird at first, but this meatball sub is actually not a terrible choice, nutritionally speaking. The meatballs are free of nitrates (the curing agent added to most deli meats that may be linked to cancer when eaten in excess) and full of protein. Plus, it's all coated in a marinara sauce: one of the best sources of the free-radical-fighting antioxidant lycopene.

If it weren't for the sky-high sodium levels, this Steak and Cheese could have ranked higher on our list. The steak is free of any preservatives or fillers, resulting in a well-balanced sub when it comes to fat, carbs, and protein.

If you can't decide, why not get all three! But rather than the previously listed trios, Subway's Club is lower in sodium and higher in protein.

A lot of that fat you see is from anti-inflammatory omega-3s found in the tuna fish. In fact, that's one of the reasons Elisa Zied, RDN, registered dietitian nutritionist, chose this as one of her favorite Subway sandwiches. Steal her order: "A 6-inch tuna sandwich with one slice of cheddar cheese, some lettuce and a few slices of tomato. It's a good way to get high-quality protein and omega-3 fatty acids, and some calcium from the cheese. The lettuce and tomato provide some bulk and texture to the meal and helps me meet my veggie quota."

Roast beef meat is a great option for those watching their weight because it's lower in belly-bloating sodium than ham or steak. As for condiments? We recommend topping it with spicy, metabolism-boosting deli brown mustard.

This sub would have ranked higher had it not been for its high sodium levels—a classic downfall of many cured ham products. Just be sure to ask your server for an extra helping of fiber-rich, hydrating veggies to help your body counteract that salt spike.

You still get a fair amount of belly-filling protein for so few calories in this classic sub. Speaking of lean meats, turkey is a great go-to. The poultry provides high-quality protein, is rich in selenium—a mineral that acts as an antioxidant, supports immunity, and helps maintain thyroid function—and bursting with energy-boosting vitamin B6. It's as much of a no-brainer as starting your day with overnight oats.

When they say "Eat Fresh," they mean it—Subway's Rotisserie-Style Chicken sandwich is hand-pulled in the restaurant and, as a bonus, is made with all-white-meat chicken raised without antibiotics. The chicken is also free of artificial colors, flavors, or preservatives. We mostly like it because it offers up a solid dose of protein for relatively few calories. Speaking of calories, do you know what 100 calories really looks like? We looked at 25 different foods to see how volume doesn't always equal calories.

"Being an entrepreneur and working 60 hours a week, I need some convenience in my life while keeping on the healthy track," says Jim White, RD, ACSM Health Fitness Instructor, ADA National Spokesman, Owner of Jim White Fitness & Nutrition Studios. One of his go-to picks is this roasted chicken sandwich because it has plenty of lean protein to help build muscle. Don't like to take it bland? Follow Jim's lead and ask for Dijon mustard. "I use Dijon mustard rather than mayo because it's low-cal but still has lots of flavor," he shares.