Surprising Habits That Cause Lasting Damage to Your Body, Says Science

Here's why these "small" daily mistakes aren't so small, after all.

Humans are creatures of habit, and it's easy to see why. There's comfort in having a firm routine, and perhaps—more importantly—a sense of control. Everyone has their own daily schedules, routines, and habits, but have you ever stopped to consider how some of the more trivial aspects of your day may be impacting your health?

We all know that certain habits like eating poorly, spending too much time in front of the TV, and not getting enough sleep can take their toll. But there are some other seemingly innocuous habits you do every day that are causing lasting damage to your body, as well. Keep reading to learn what they are, and for more things you're doing that are affecting your body and your lifespan, don't miss these 4 Bedtime Habits That Are Harming Your Body, According to Science.

Fact: There are some people who just never want their workouts to end. But knowing your limits, and giving your body the proper amount of time to recover, are just as important to fitness success as anything else.

Running can be particularly addicting. A recent study published in the International Journal of Environmental Research and Public Health documented the dangers of runner's addiction. "Most running-related injuries are sustained as a result of overtraining and overuse or failing to adequately recover, merely due to an obsessive passion for running," says that study's co-author University of South Australia Adjunct Professor Jan de Jonge.

Doing too much HIIT—or shorter bursts of rapid-fire, really intense exercises—isn't great, either. According to a new study published in March in the journal Cell Metabolism, exercisers who performed a leg-melting 152 minutes of high-intensity workouts in a single week came away with impaired mitochondria, the organelles in your cells that burn calories. What's more, the study participants also increased their insulin resistance. "It's quite similar to the changes that you see in people that are starting to develop diabetes or insulin resistance," Filip Larsen, of the Swedish School of Sport and Health Science, who oversaw the experiment, explained to The Scientist. For some healthier ways to exercise, see why Walking This Way Can Add 20 Years to Your Life, Says Top Scientist.

Eating lunch at your desk

Enjoying a sandwich or salad while catching up on backlogged emails may seem like a convenient way to save some time, but it's probably a better idea to eat away from your keyboard.

Despite daily, near-constant use, most people rarely if ever clean their keyboards, leading to an incredible buildup of bacteria, germs, and fungi. One study, conducted by researchers at the University of Arizona, found that the average keyboard is much dirtier than any given toilet seat. Various forms of harmful bacteria including E. coli and staph have been collected from keyboards, which means it's advantageous to keep your food as far as possible from the space bar.

What's more, eating at your desk is more generally an unhealthy thing to do. A 2012 study published in the journal Appetite found that people who eat at their desks are far more likely to overeat.

"If you eat at your desk when you're distracted through working and you're not giving yourself a proper lunch break, then the food you eat doesn't fill you up as much," Jane Ogden, Ph.D., a professor in health psychology at the University of Surrey, who led the study, explained to Wired. "You don't remember that you have eaten in the same way, and you don't code food in the same way. You're more likely to feel hungry in the afternoon and then eat more." 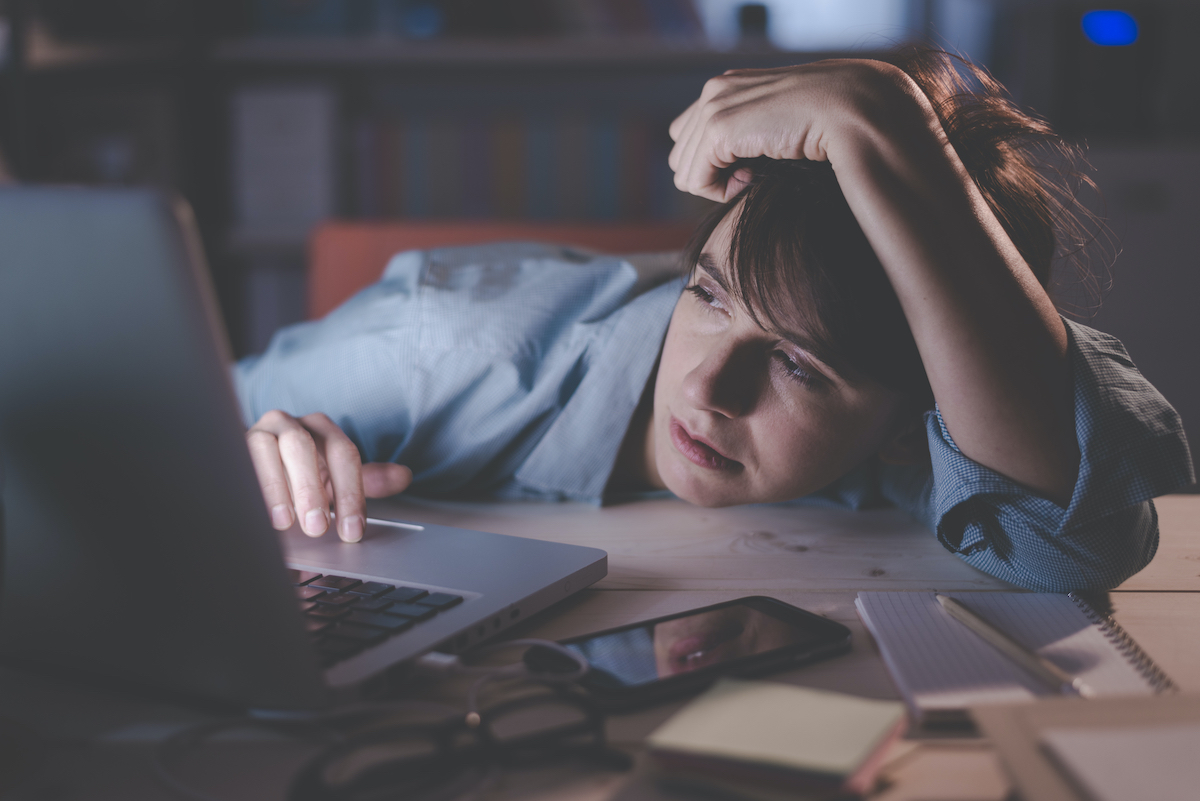 Some of us naturally come alive at night, so the idea of working the night shift might sound pretty appealing. Try not to make it a habit, though. Regularly working all night can throw the body's natural clock out of order, which can lead to an increased risk of heart attack, stroke, and high blood pressure. A change in waking hours will also disorient the production of hormones that are responsible for your metabolism, potentially raising the odds of obesity and diabetes. For more on the side effects of burning the candle at both ends, don't miss What Happens to Your Body When You Have a Busy Job, Says Science.

The human body is interconnected in ways that are hard to comprehend, and your oral health can go a long way toward fostering both negative and positive health developments. It doesn't seem terribly important when we're in a rush to get out of the bathroom, but maintaining a consistent flossing schedule can help protect your heart. There's no arguing that not flossing often leads to gum disease. Well, gum disease is linked to heart disease. Tons of research support this notion.

"Dental health professionals should be aware that oral health is indispensable to overall physiological health, including cardiovascular status," says Davide Pietropaoli, D.D.S., Ph.D., of the University of L'Aquila in Italy, the head author of a research project that discovered a link between your poor oral health and high blood pressure.

Food—and all the wonderful flavors that come along with it—are among life's simplest yet greatest pleasures. Of course, sometimes we're all forced to eat as fast as possible due to packed schedules and busy lives. Occasionally that's no big deal, but if you make it a routine to finish eating in under five minutes flat, it could come back to haunt you some day.

Taking too many vitamins

Many people swear by taking a daily multivitamin. And let's be clear: it's definitely important to make sure you're getting enough vitamins and nutrients into your diet. That being said, too much of anything can turn into a problem.

Now, it's near impossible to take it in too many vitamins while eating regular food, but if you're taking supplements you can get carried away. One study published in the Journal of Clinical Oncology found a "clear link" between high doses of vitamins B6 and B12 over time and lung cancer. Similarly, another study reports too much vitamin A can work against the immune system. And for some great ways to lead a healthier life, make sure you're aware of The Secret Trick That Makes Every Exercise So Much Better.