You're much better off never giving in to the temptation. Your waistline will thank you!

We're just going to go ahead and say it—no one is immune to a snack craving. It happens to everyone, just about every day. There is nothing wrong with turning to a pick-me-up during the day in-between your main meals to keep you going. You do want to make sure you're choosing the right kind of snacks. And there are some that just don't make the cut to be eating regularly.

Specifically, it's those guilty pleasure snacks that are just bad news.

We've rounded up the biggest offenders so you can make a smarter choice when it comes time to indulge in that mid-day snack. Below is a breakdown of the guilty pleasure snacks that just aren't worth it. And for more of what you should be eating, check out The 7 Healthiest Foods to Eat Right Now.

It's no secret that candy really doesn't provide any nutritional value to your daily diet, as much as you might not want to admit it. The issue is that it's very easy to eat more than the recommended serving size. And even then, there's a good chance you'll be consuming far too much added sugar, and added sugar is not your friend, as it's been linked to an increased risk of heart disease.

Anyone who has ever eaten a Sour Patch kid knows it's nearly impossible to just eat one or two as they're just so small. One serving alone has more than 20 grams of sugar—you can just imagine how much is in a whole pack! 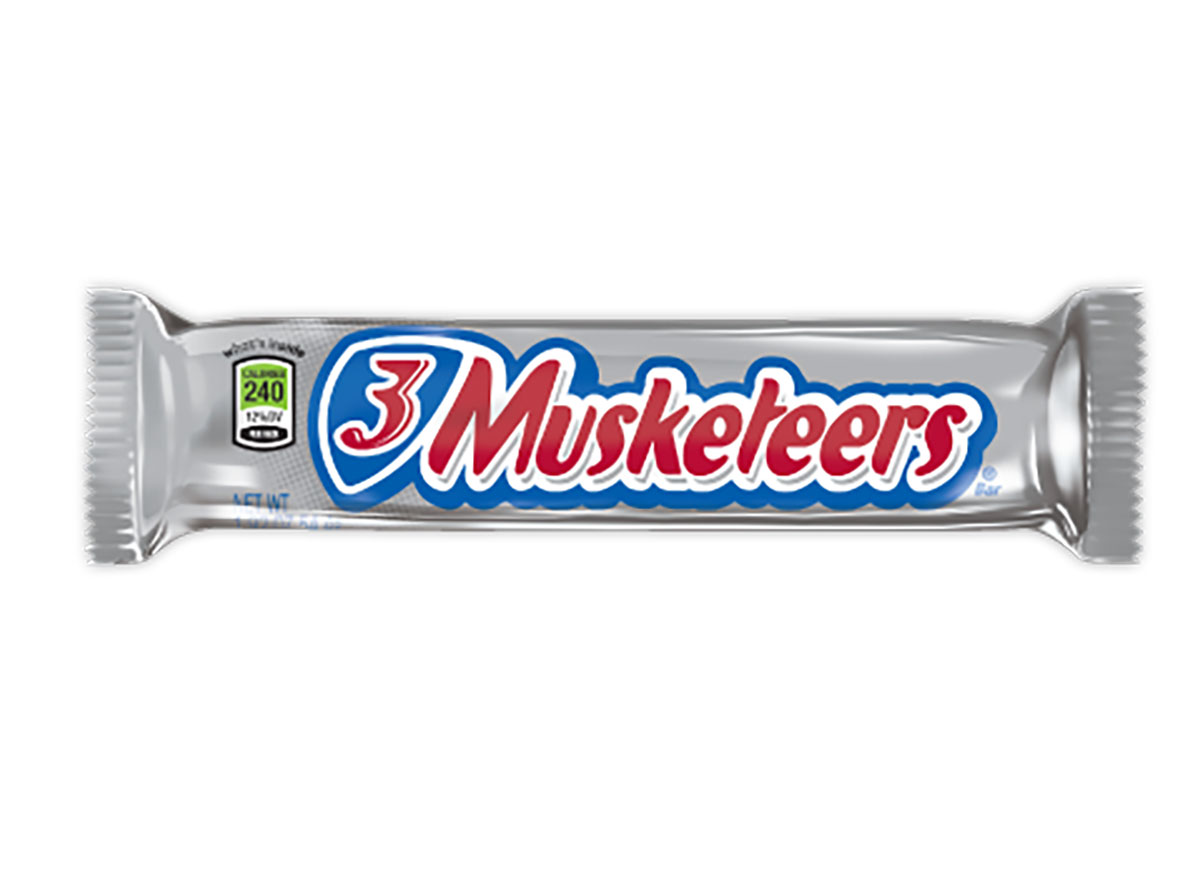 While dark chocolate is known for its health benefits, the same can't be said for milk chocolate. According to a study in the American Journal of Clinical Nutrition, researchers found that eating it can cause you to pack on the pounds, as it was the one food associated with the highest energy density—which means the most with weight gain.6254a4d1642c605c54bf1cab17d50f1e

The worst option? None other than 3 Musketeers. One bar knocks you back 240 calories and has 36 grams of sugar. It's no wonder it landed the top spot in our list of beloved candy bars ranked by how toxic they are.

But if you really want to indulge in this candy bar, all hope isn't lost. Your best bet is to go for the mini 3 Musketeers bars, according to Eat This, Not That! medical board expert, Leslie Bonci, MPH, RD, CSSD, LDN. 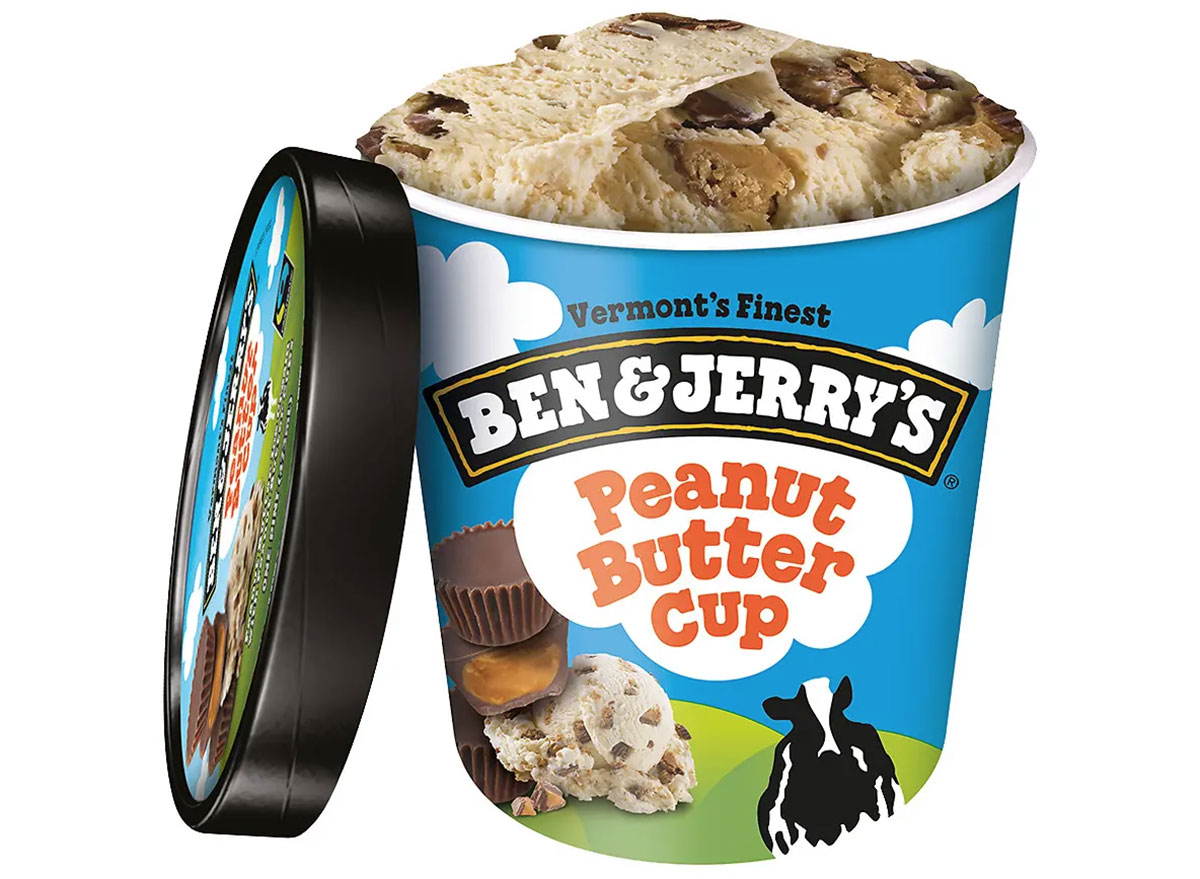 Indulging in a pint of ice cream seems like the ultimate comfort snack, but eating that entire pint can cause you to feel sluggish and bloated afterward, and can even lead to weight gain. (If eating an entire pint in one sitting is something you do often!)

The biggest offender is Ben & Jerry's Peanut Butter Cup. This pint serves up 96 grams of sugar and is packing 1,400 calories. Scary stuff!

Instead of risking eating an entire pint in one sitting, Bonci suggests serving yourself some ice cream into a cone and saving the rest. A solid compromise!

Having boxes of cookies in your kitchen can lead you down a slippery slope, as soon enough you might find yourself going back for one more, followed by one more, and then another! The worst cookie to have on hand is Oreo's Mega Stuff, as it's packed with processed ingredients, and is high in calories, sugar, and fat.

If you're really in the mood for a classic cookie, perhaps go for some Oreo Thins instead, as one is packing just 3 grams of sugar. 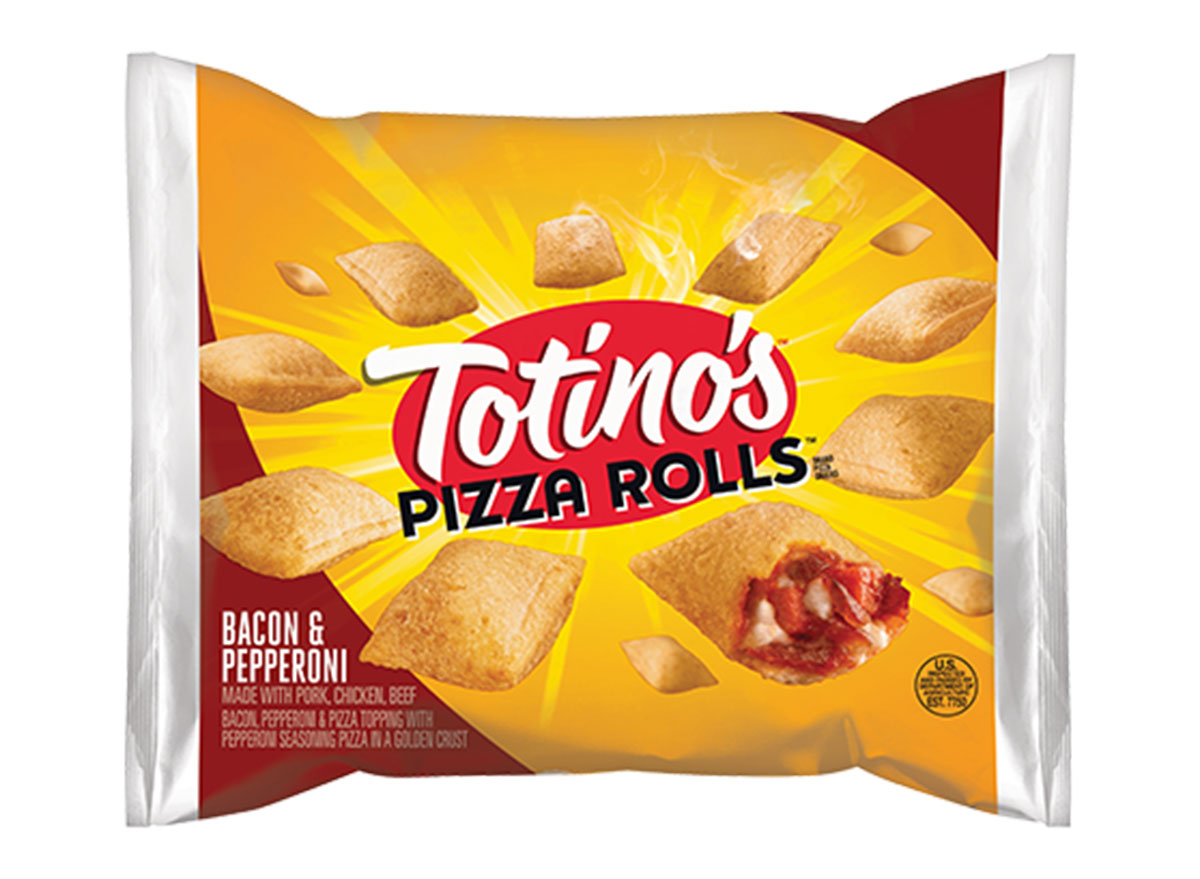 Pizza might just be the quintessential guilty pleasure food, and mini pizza bites seem like a harmless way to get your pizza fix. Well, if you go for these pepperoni and bacon filled Totino's Pizza Rolls, you'll see that's not the case. This is simply a high-calorie, sodium-packed snack!

If you're genuinely in the mood for a slice of pizza, Bonci says you're much better off having that actual slice. If you do end up munching on these rolls, she suggests making your meal after a bit lighter. Go for a veggie omelet, chicken or veggie stir fry, or tuna on a salad. All about balance! 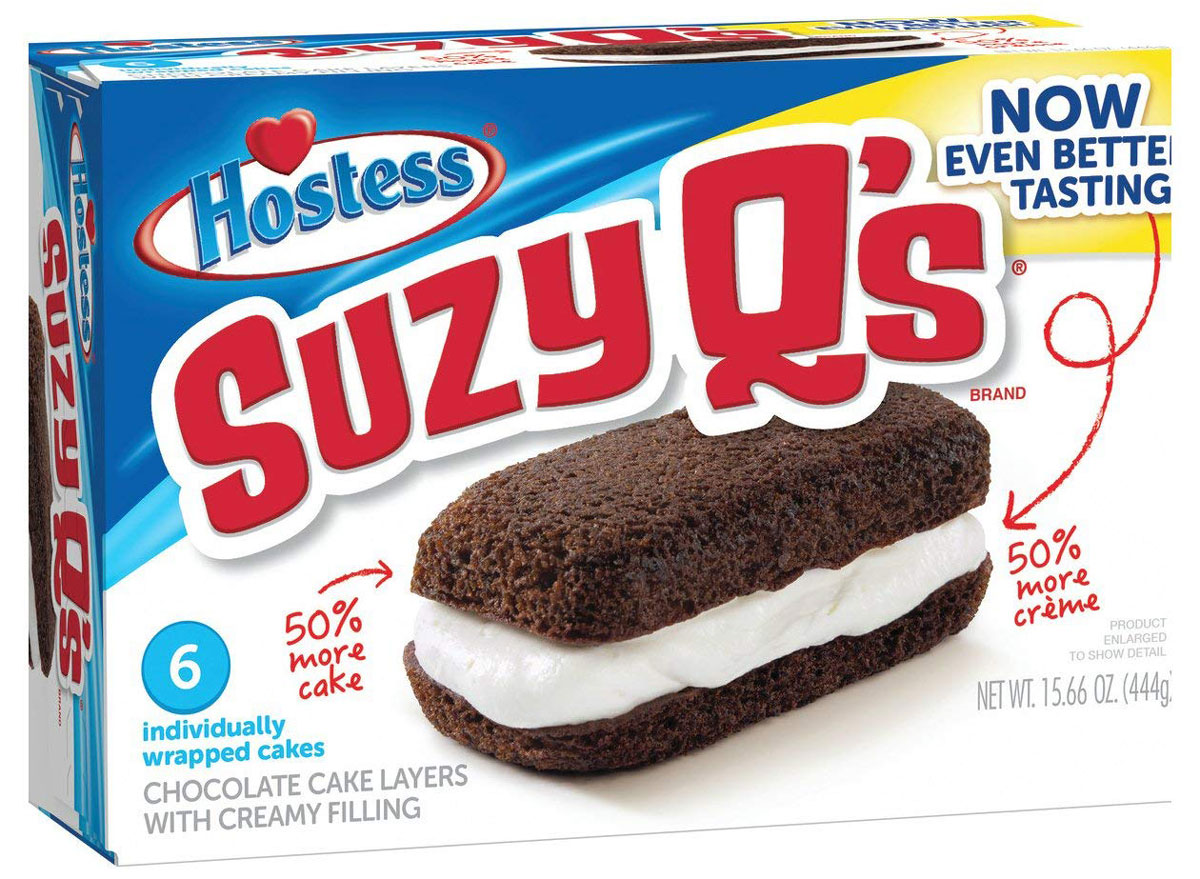 You're most likely catching on to the fact that if a snack is high in calories, fat, sodium, and sugar, it's a no-go. There's a good chance they're not serving up anything good for you. That's what you're going to find in most mini-pastries. Take for example Hostess' Suzy Q's. You'll see first up on the miles-long ingredients list is sugar, followed by high fructose corn syrup. There is virtually no fiber here either, so you'll be hungry not too long after eating one of these sugar bombs.

Not only are potato chips an addictive snack choice so it's nearly impossible to eat just one, but they've been linked to weight gain, one Harvard study found. The worst of the bunch is Herr's Salt & Vinegar chips, as one serving contains a whopping 490 milligrams of sodium per serving. It's no wonder it's on our list of the unhealthiest potato chips on the planet. 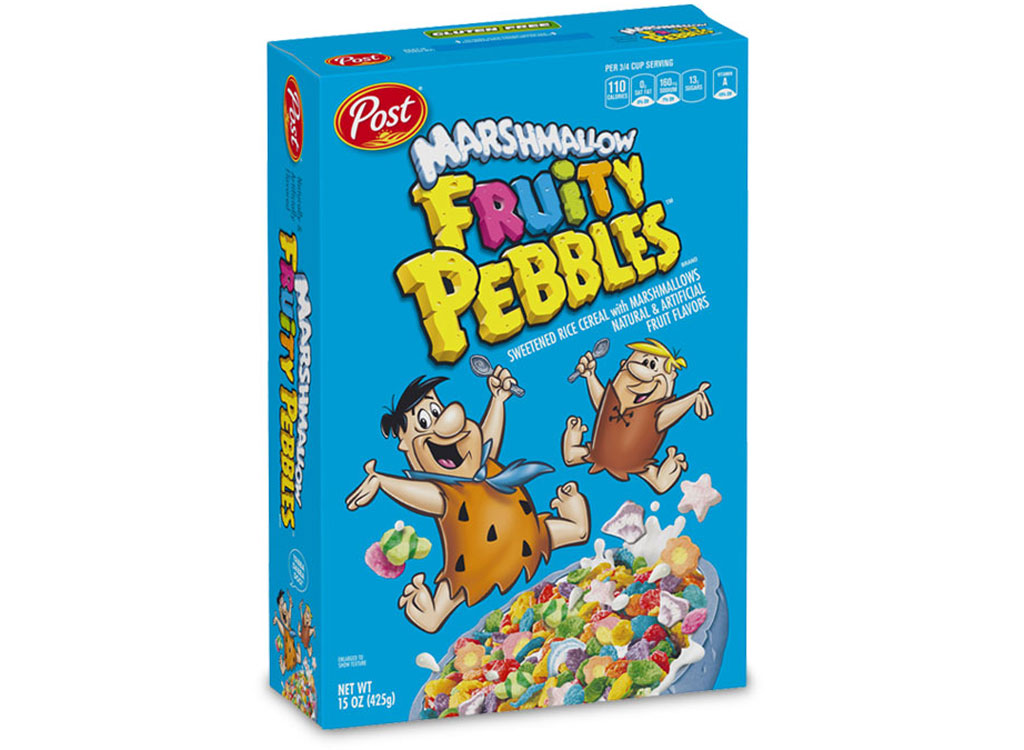 A small bowl of cereal anytime of day is never a bad idea, and there is a wave of nostalgia that comes with eating a colorful, sugary cereal from your childhood. But just because you ate it as a kid doesn't mean you should be eating it now!

Take for example Post's Marshmallow Fruity Pebbles—it's serving up 18 grams of sugar per cup. It also is stacked with plenty of artificial colors including Yellow 5, Yellow 6, Red 40, and Blue 1. No thanks!

You might think a granola bar can't be all that bad, but again, they're lurking with less than stellar ingredients. Plenty of the chocolate-coated bars are just as bad as eating a regular candy bar. This Zone Perfect Chocolate Almond Raisin bar is a perfect example, as it's packing 17 grams of sugar. There are healthier options you can eat instead. 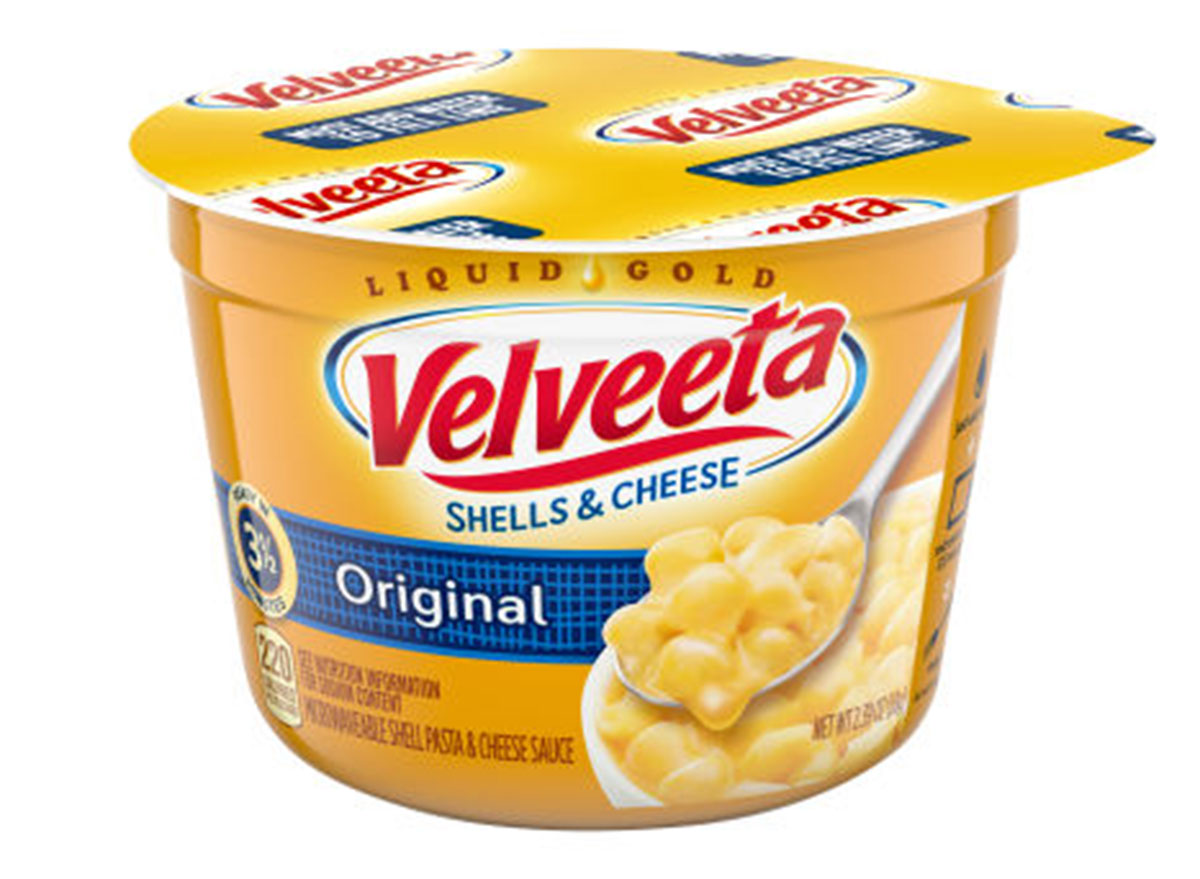 When in doubt, mac and cheese is always there when you need a little pick-me-up. And the instant kind gets the job done. But again, it's a sodium-packed snack and Velveeta's Shells & Cheese with its "creamy taste of liquid gold" is one to avoid.