Packed with omega-3 fatty acids, B vitamins, and lean protein, these are the healthiest fish to eat.

Was it halibut that you ate last night—or haddock? Was it fluke or flounder? Redfish or whitefish? Bluefin or yellowtail? Snow crab or stone crab? Which one was good for the environment? Which is the healthiest fish to eat? And which one was so loaded with mercury it was like chewing on a thermometer?

One thing we do know for certain is that regularly eating seafood as part of a healthy diet can do wonders for your weight loss goals—so long as you choose the right kind. That's where the waters get murky again. So we had our research team here at Eat This, Not That! dive into the science behind your seafood and clear things up with this list of the healthiest fish to eat for weight loss.

You might be surprised to learn that steamed white fish like halibut tops fiber-rich oatmeal and vegetables in the satiety department. The Satiety Index of Common Foods, an Australian study published in the European Journal of Clinical Nutrition, ranks it the number two most filling food—bested only by boiled potatoes for its fullness factor. A separate Journal of Nutrition study that compared the satiety of different animal proteins found a nutritionally similar white fish (flake) to be significantly more satiating than beef and chicken; satiety following the white-fish meal also declined at a much slower rate. Study authors attribute the filling factor of white fish like halibut to its impressive protein content and influence on serotonin, one of the key hormones responsible for appetite signals.6254a4d1642c605c54bf1cab17d50f1e

Scientists have yet to prove oysters well-known reputation as an aphrodisiac, but research has shown oysters' lesser-known potential as natural weight loss aid. A half dozen order will set you back a mere 43 calories (the equivalent of a single Saltine cracker!), and provide 21 percent of your recommended daily allowance for iron, deficiencies of which have been linked to a significant increase in fat gene expression. What's more, oysters are one of the best food sources of zinc, a mineral that works in tandem with the "I'm hungry!" hormone, leptin, to regulate appetite. Research shows overweight people tend to have higher levels of leptin and lower levels of zinc, in comparison to lean folks. One 2017 study found that zinc can help ward off metabolic syndrome and improve blood pressure, glucose, and LDL cholesterol. Get a shuck-load of zinc, naturally, with oysters—just six fulfills your recommended daily need by 200 percent! So make a happy-hour habit of hitting up the raw bar for a dozen on the half-shell; the order will get you into your skinny jeans, even if it doesn't get you into anyone else's. 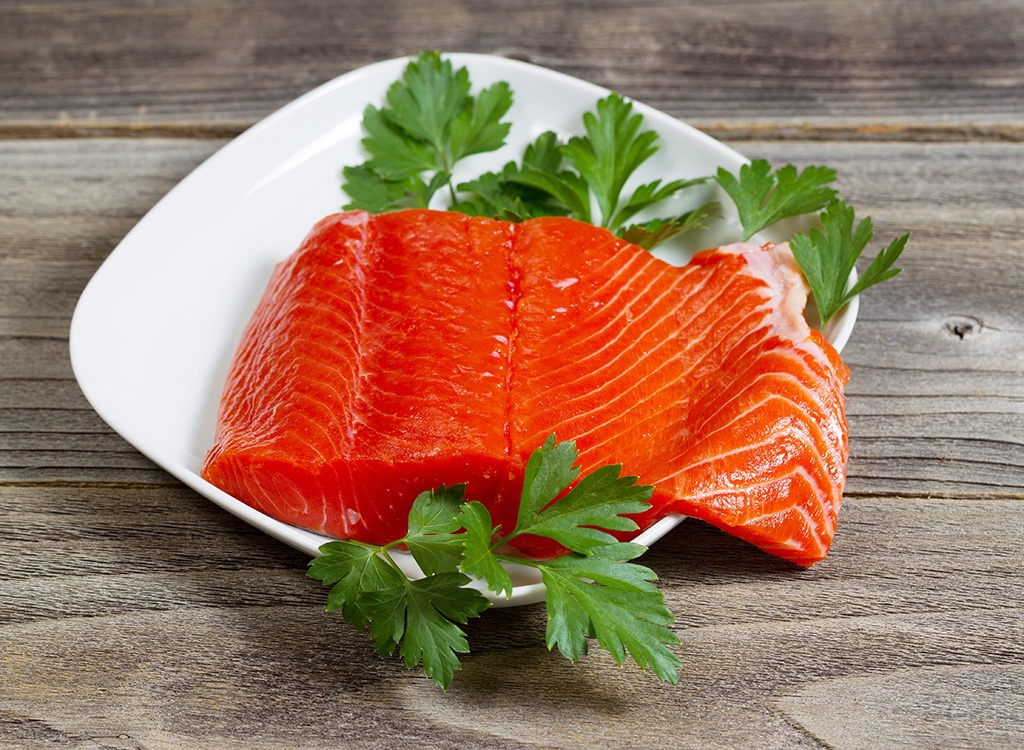 Don't let salmon's relatively high calorie and fat content fool you; studies suggest the oily fish may be one of the best for weight loss. (In fact, it makes our list of the fatty foods that will help you lose weight.) In one study, participants were divided into groups and assigned one of three equi-caloric weight loss diets that included no seafood (the control group), lean white fish, or salmon. Everyone lost weight, but the salmon eaters had the lowest fasting insulin levels and a marked reduction in inflammation. Another study in the International Journal of Obesity found that eating three 5-ounce servings of salmon per week for four weeks as part of a low-calorie diet resulted in approximately 2.2 pounds more weight lost than following a equi-calorie diet that didn't include fish. Wild salmon is leaner than farmed, which is plumped up on fishmeal; and it's also proven to be significantly lower in cancer-linked PCBs. So go wild—literally!

The seafood jury rules scallops shall remain innocent until proven guilty! While they're often guilty as by association with creamy and decadent restaurant sauces (not great for weight loss), the high-protein, low-calorie mollusks themselves are great for your waistline, and even your cholesterol. One study published in the Journal of Food Science found bioactive capsules made from scallop byproducts to show significant anti-obesity effects. Animals fed the capsules—a mixture of scallop and seaweed—over the course of 4 weeks showed greater reductions in body weight and body fat, compared to a control, which authors attribute to scallop's high protein content. (In fact, a scallop is 80 percent protein, and the part you eat is the mollusk's adductor muscle!) A separate study that looked at the effects of different proteins on adipose tissue and glucose tolerance found scallops to reign supreme. Mice fed scallop protein showed lower blood cholesterol and diet-induced obesity levels compared to mice fed equi-caloric portions of casein or chicken protein. 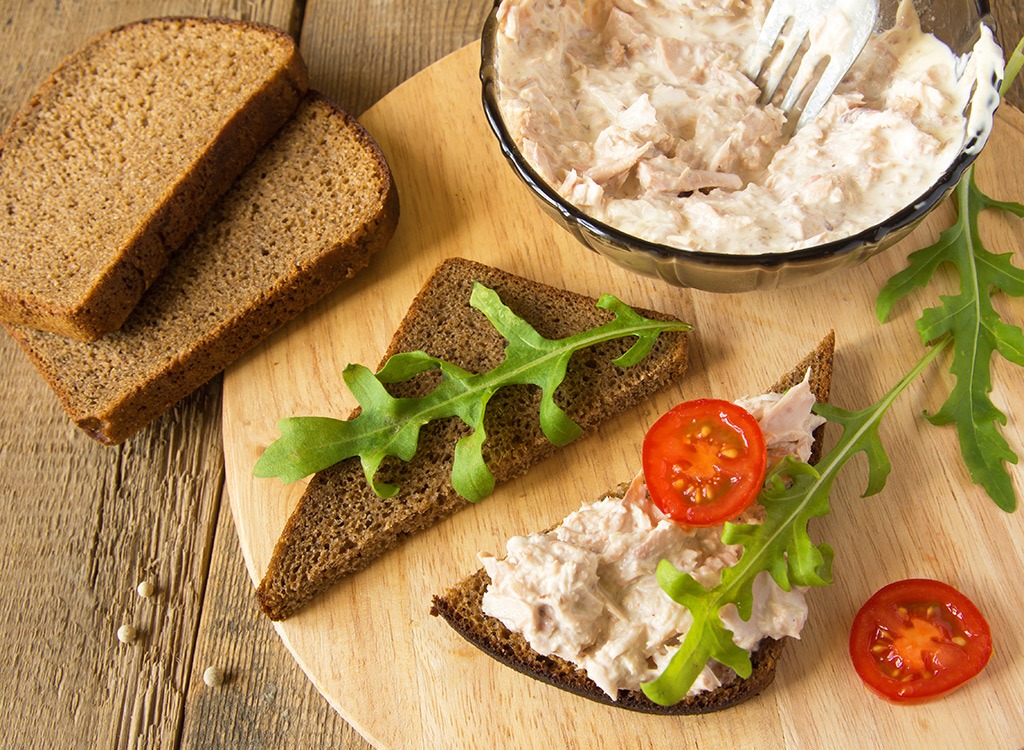 Tuna or to-not? That is the question. As a prime source of docosahexaenoic acid (DHA), canned light tuna is one of the healthiest fish to eat that will slim down your belly! One study in PLoS One showed that omega 3 fatty acid supplementation had the profound ability to turn off abdominal fat genes. And while you'll find two types of fatty acids in cold water fish and fish oils—DHA and eicosapentaenoic acid (EPA)—researchers say DHA can be 40 to 70 percent more effective than EPA at down regulating fat genes in the abdomen, preventing belly fat cells from expanding in size. But what about the mercury? Mercury levels in tuna vary by species; generally speaking, the larger and leaner the fish, the higher the mercury level. Bluefin and albacore rank among the most toxic, according to the Environmental Defense Fund. But canned chunk light tuna, harvested from the smallest fish, is considered a "low mercury fish" and can–and should!–be enjoyed two to three times a week (or up to 12 ounces), according to the FDA's most recent guidelines. 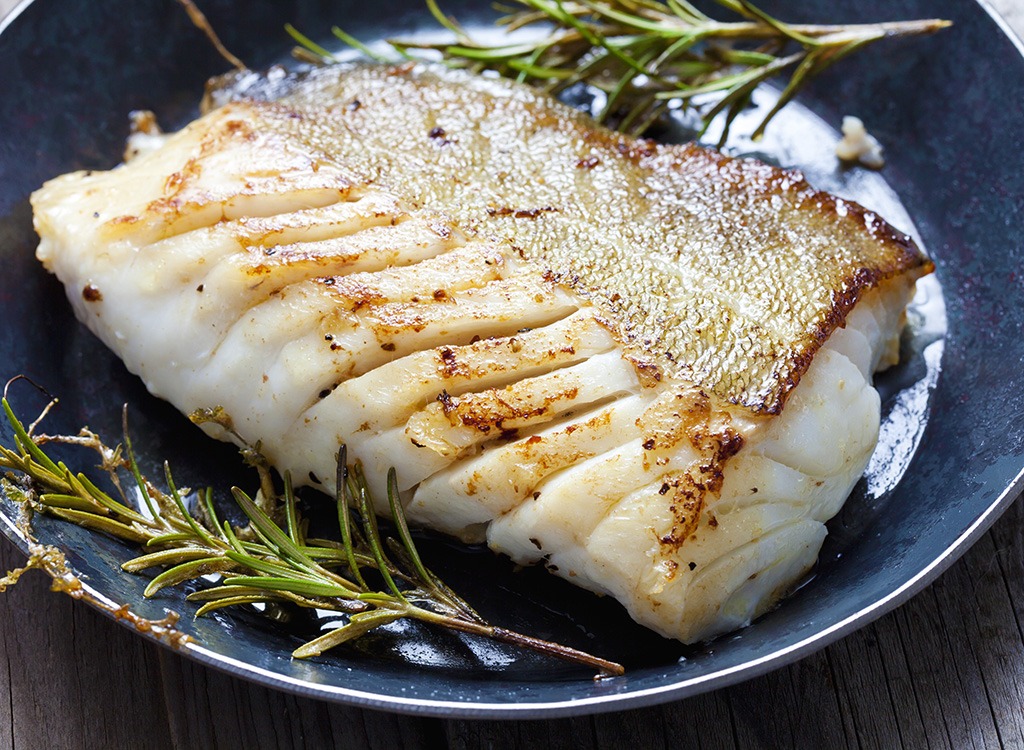 Fish and chips won't help you lose weight, at least not out of the fryer. But research suggests Pacific cod, the fish that's typical of fish sticks, is one of the healthiest fish to eat. One study in the journal Nutrition, Metabolism & Cardiovascular Diseases found that eating five servings of cod per week as part of a low-calorie diet for eight weeks resulted in an extra 3.8 pounds of weight loss compared to a diet with the same amount of calories but no fish. And a second study in the European Journal of Clinical Nutrition found that people ate 11 percent less at dinner after having cod for lunch versus those who ate a beef lunch. Researchers attribute the satiating and slimming properties to cod's high protein content and amino acid profile, which can help regulate the metabolism. No wonder Captain Birdseye looks so smug!