18 of Your Favorite Hot Cocoa Mixes—Ranked!

With the right tin of hot cocoa in your cupboard, you'll stay warm and healthy this season.

By Dana Leigh Smith
FACT CHECKED BY Samantha Boesch
The product recommendations in this post are recommendations by the writer and/or expert(s) interviewed and do not contain affiliate links. Meaning: If you use these links to buy something, we will not earn a commission.

In theory, the idea of drinking hot, creamy, melted chocolate seems almost too good to be true. And sadly, it often is. Most of the mixes in the grocery store are far too sweet to be healthy, and many of the healthier ones taste like someone dropped an old Hershey's bar in a bucket of swamp water.

That's why we decided we'd embark on a quest to find the perfect cup of hot chocolate. We're defining "perfect" as one that's both tasty and not totally horrible for you. To find out which cocoa mixes are the best of the bunch, we studied the nutrition and ingredient information of some of the nation's top-selling cocoas, deducting points for sketchy ingredients and poor fiber-to-sugar ratios. (Fiber helps us feel full and slows the absorption of the drink's sugar.)

Calories also played a role, as did the flavor. There are few varieties we didn't have the opportunity to sample, but we otherwise conducted a blind taste test of the majority of the cocoa mixes you'll find below. Read on to discover where your favorite falls in the ranking and learn which tasty varieties will be the kindest to your health.

Not only does this Walmart brand of sipping chocolate contain an entire day's worth of sugar, but it also has far more chemicals than any one product should ever contain. Like many other hot chocolates on the market, this mix is made with alkalized cocoa, which means the chocolate bean has been treated with an alkalizing agent to balance the cacao's natural acidity. This reduces the flavonoid and polyphenol content substantially, transforming the potent superfood into something that's basically void of any notable nutrition.

Land O'Lakes is known for making butter, and we think they should stick to their specialty. Any drink made with nearly an entire day's worth of sugar doesn't deserve a place in your favorite mug, especially when there are far better options on supermarket shelves. 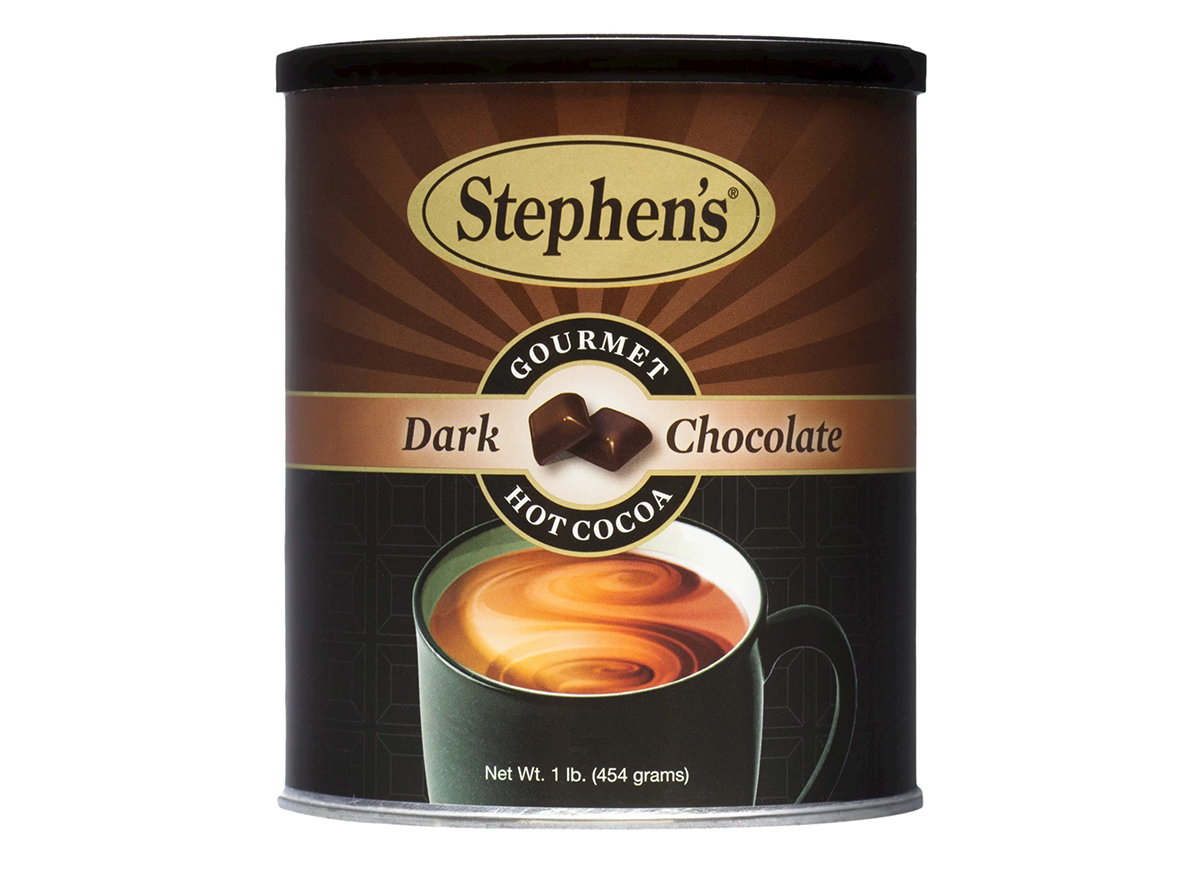 Carrageenan is sourced from seaweed, and it's relatively harmless—aside from the fact that it's known to cause bloat and stomach trouble. There's no reason to risk a bad reaction when there are options at the market free of the freaky stuff added to Stephen's Gourmet Mix (it's not so gourmet after all, so it seems). 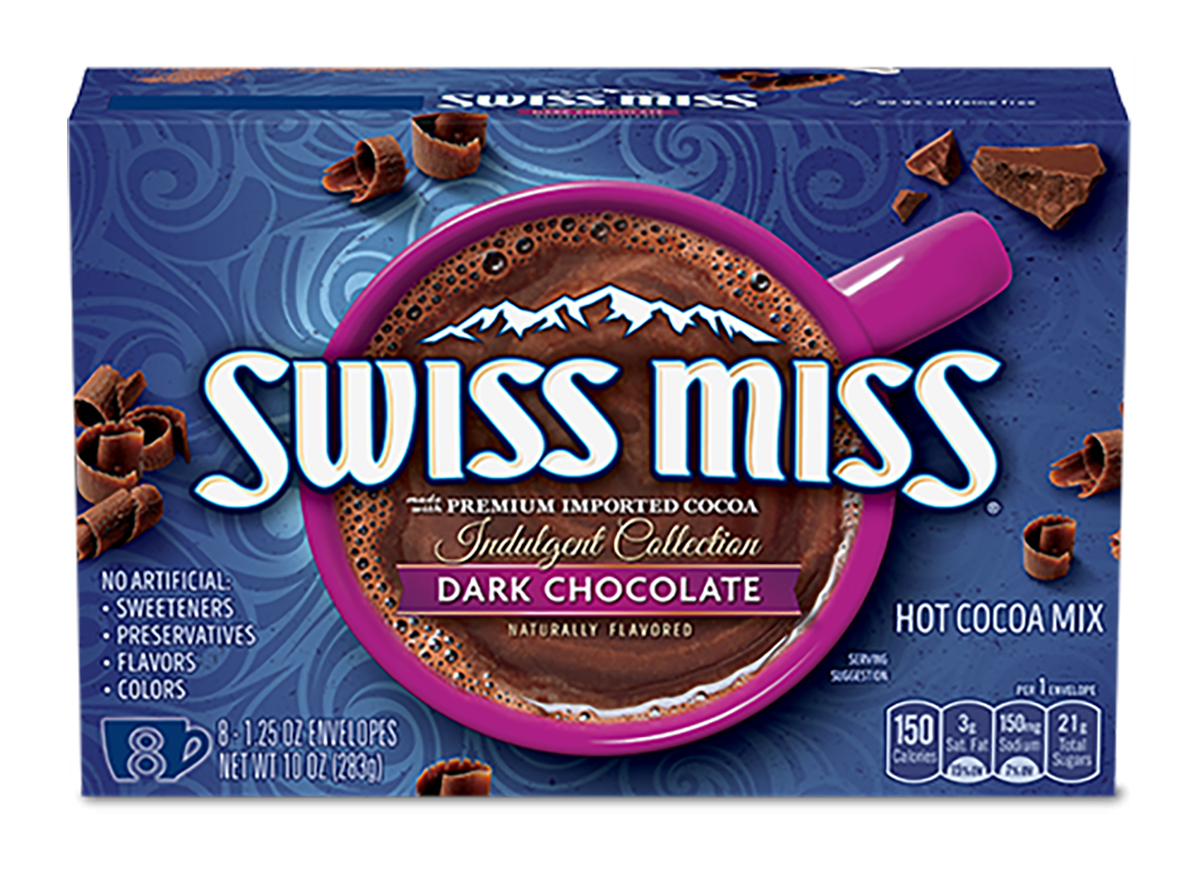 Though most taste testers gave a thumbs up to this drink's thick, smooth, and foamy consistency, the flavor wasn't as on point.

"Drinking this was like sipping the milk leftover in a bowl of chocolate cereal—and not in a good way," said one tester.

Maybe it has something to do with all the chemicals that were floating around in their cup? Although this mix has more calories than Stephen's, we ranked it higher because it has a better fiber-to-sugar ratio. Either way, it shouldn't be your go-to.

Creamy hot cocoa packed for less than 100 calories and zero grams of sodium? Definitely not horrible. However, the sugar content is still high in this hot cocoa mix.

Don't let the low-calorie content of this product fool you. In no way, shape, or form can this cocoa help keep you trim. A study in the journal PLoS One found that acesulfame potassium—aka acesulfame K—can cause glucose intolerance, which ultimately results in confused hormones and weight gain. Not to mention, if you're going to enjoy a cup of hot cocoa, you should really just go for the real deal and truly savor it.

Thanks to the addition of sucralose—the generic name for Splenda—Nestle is able to keep their chocolaty drink to a (relatively) impressive 12 grams of sugar per serving. While scientists have found a connection between sucralose and cancer in mice, the risk posed by overconsumption of sugar and high-fructose corn syrup far outweighs the cancer risk posed by sucralose and most other artificial sweeteners, according to Michael F. Jacobson, president of the Center for Science in the Public Interest.

What you need to know is that sucralose is one of the best of the "bad" sweeteners. There are far worse options on the market—and in hot cocoa mixes. As for the flavor, our tasters were fans of the "just sweet enough," "real dark chocolate" flavor and the "thick and velvety" texture of this supermarket buy. Even so, we couldn't ignore the addition of partially hydrogenated oils, which is why it falls toward the bottom of the barrel. 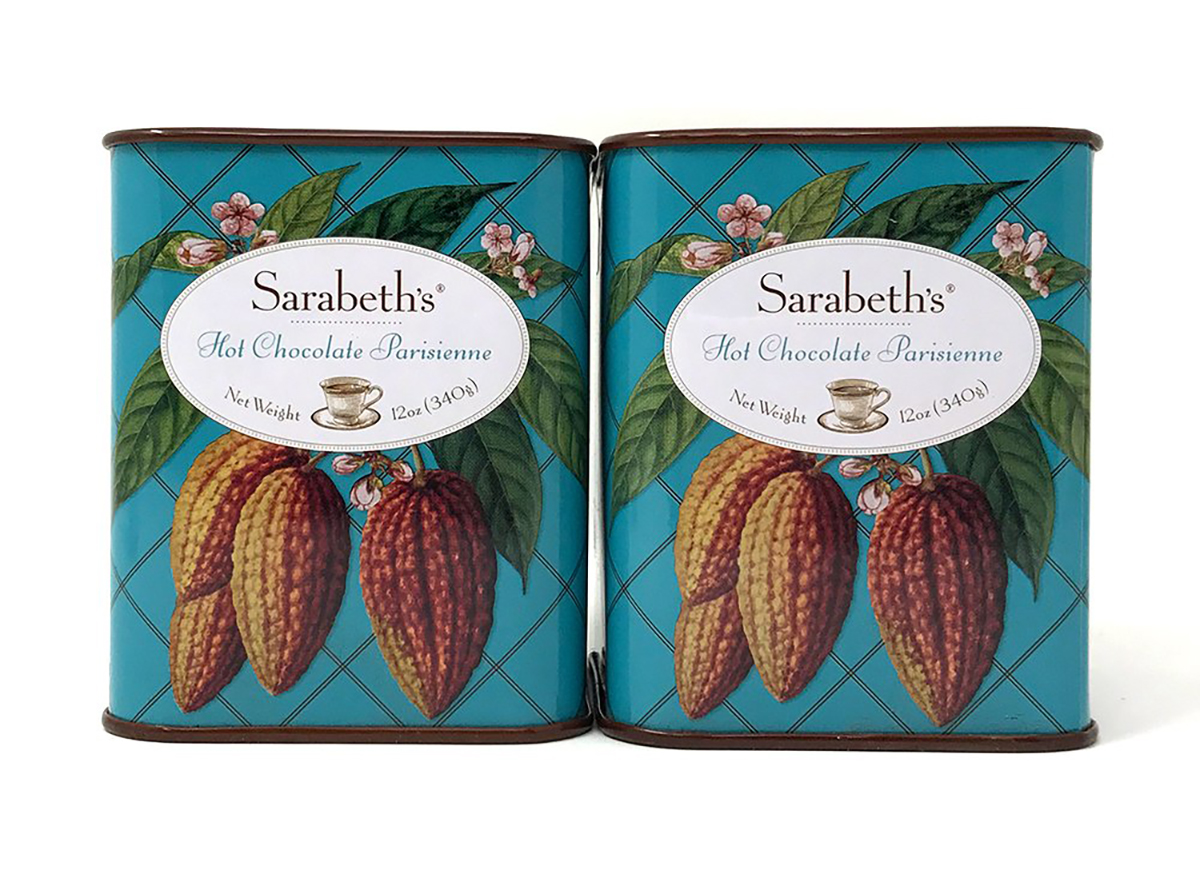 This one certainly has more calories than many of the other mixes. We're also not loving the high sugar count—and our taste testers agreed. However, a number of sippers did appreciate this mix's "woody chocolate" and "hot fudge-esque" aroma. If you're curious and want to indulge, do yourself—and your gut—a favor and cut your portion size in half.

Another benefit that this mix may offer over others is that it has a decently high fiber and protein count compared to some of the other mixes on the list. 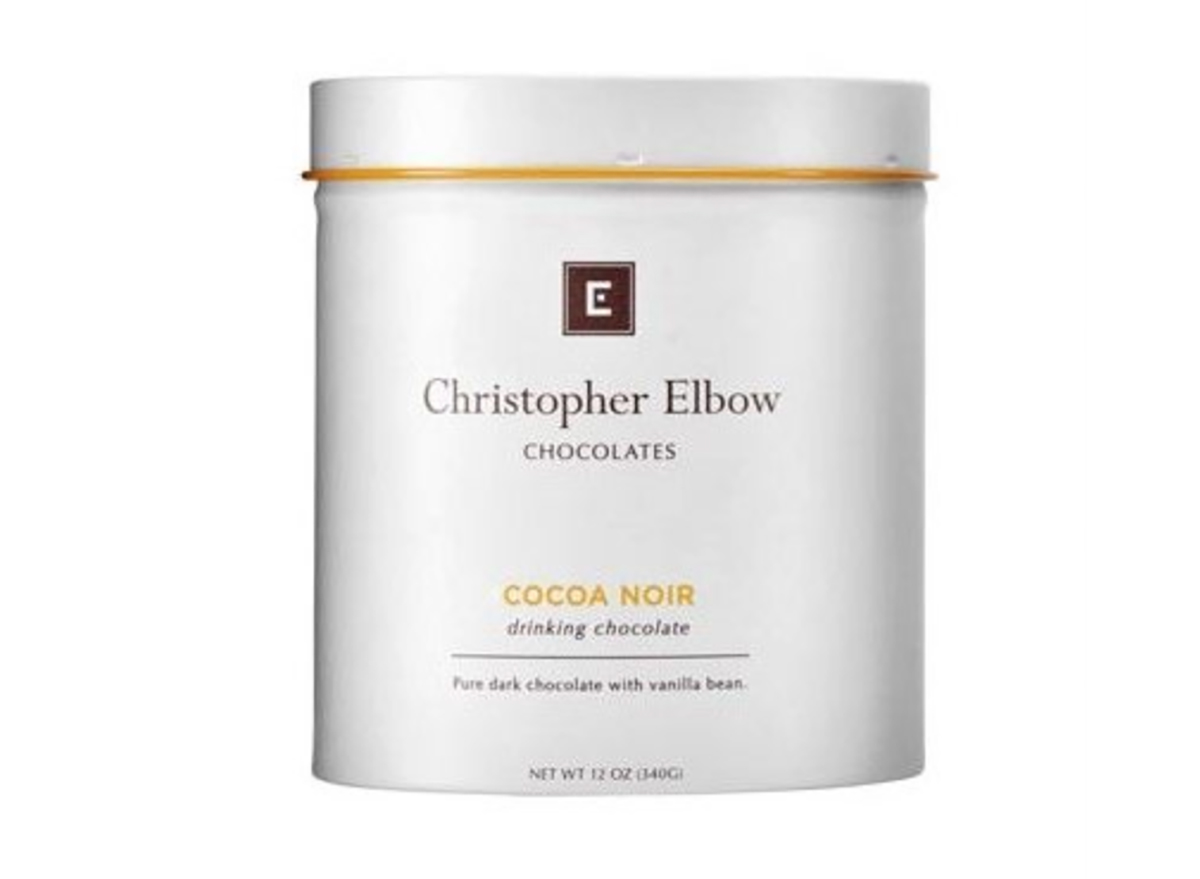 Sure, the ingredient panel is free of any red flags, but our taste-testers weren't fans of this chocolatey concoction. "This is nothing great. It tastes like milk mixed with chocolate sauce," one person said. "Smells like stale milk," said another. There are far better-tasting options—our advice is to skip it.

The fat content of this mix is also really high compared to others, even though there are 3 grams of fiber and 4 grams of protein.

Organic and low in calories it may be, but several tasters found this Whole Foods cocoa "bland" and were turned off by its "thin" and "chalky" consistency. One person even went so far as to describe this mix as "atrocious," while another found the taste to be reminiscent of dirt.

You can find this milk chocolate hot cocoa in a variety pack with peppermint and dark chocolate. A huge hit with tasters, this famous chocolatier's hot cocoa mix was described by some as having a "rich and slightly bitter taste," while others found the flavor "extremely chocolatey—like drinking a chocolate bar."6254a4d1642c605c54bf1cab17d50f1e

Though some tasters didn't enjoy this variety's thick and syrupy consistency, most of our volunteers said that they'd "definitely buy it." We just hope they enjoy it in moderation, because it's fairly high in sugar and doesn't bring much to the table in terms of fiber. If you decide to indulge in this rich, comforting drink, we suggest enjoying it along with one of these tasty high-fiber foods so it doesn't give you a sugar rush. 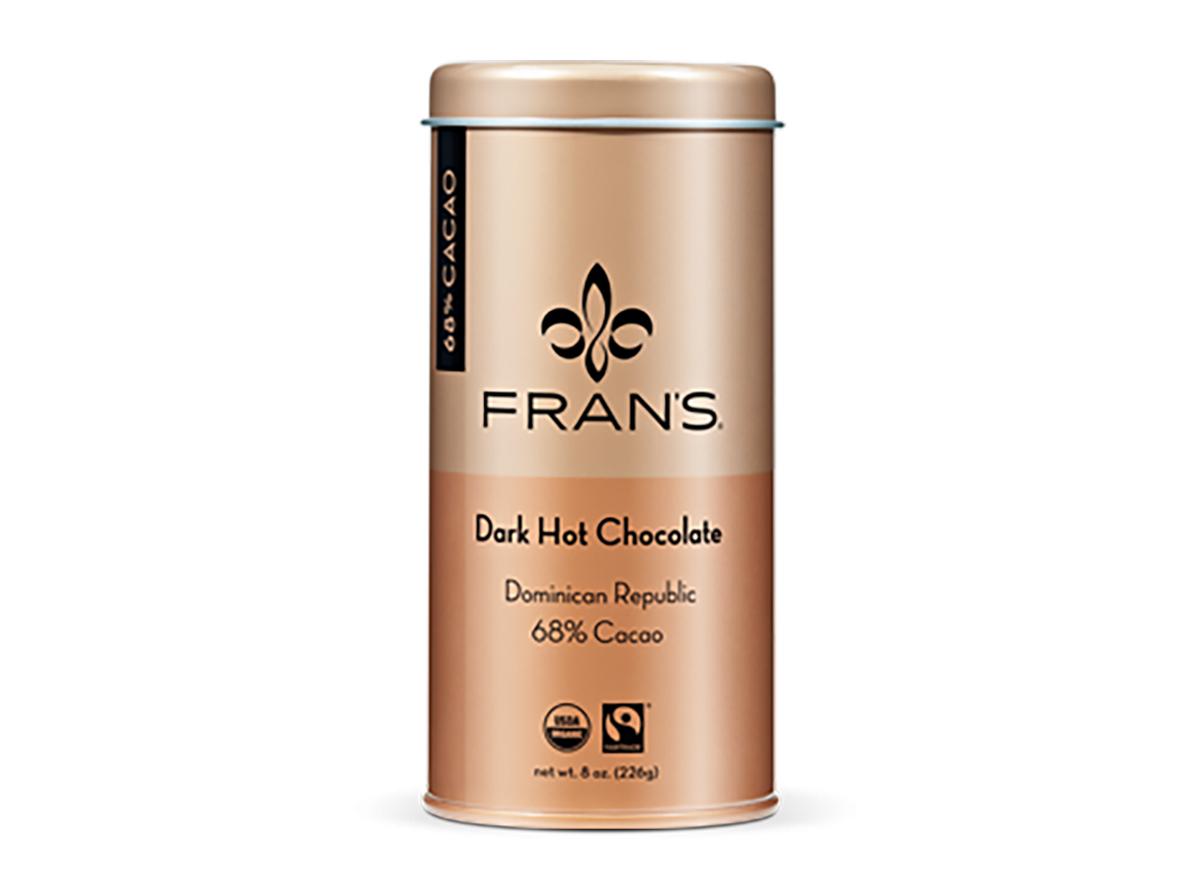 Fran's earned praise for its rich "liquid Cocoa Puff" flavor but dropped a few slots due to its thin consistency and higher calorie count. We've got to admit, though, its fiber-to-sugar ratio is among the best of the lot! Overall, it's not a bad choice in terms of nutrition or flavor. 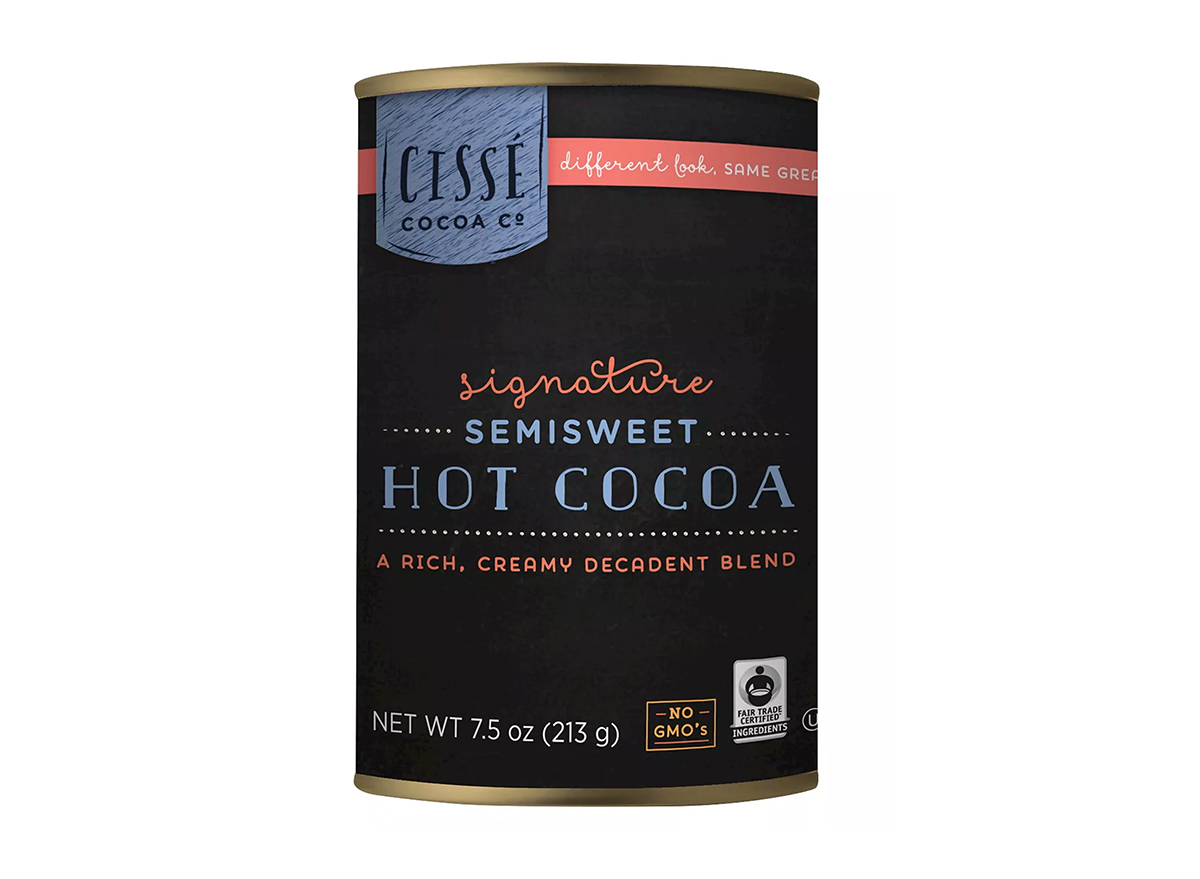 Cisse Cocoa made a good first impression on our volunteers, who commented on its "velvety and creamy texture" and "rich fudgy and nutty notes." However, a few tasters complained that it tasted "artificial" and was "too sweet and syrupy." Considering it has a whopping 20 grams of the sweet stuff, we can't say we're all that surprised. The only reason this ranks higher than Fran's is that it has 60 fewer calories. In reality, though, they are somewhat tied.

This mix is still a bit high in sugar, but the good news is that it has 2 grams of fiber, only 95 milligrams of sodium, and is certified vegan, gluten-free, plant-based, and dairy-free, making this hot chocolate mix a good fit for many different dietary needs. 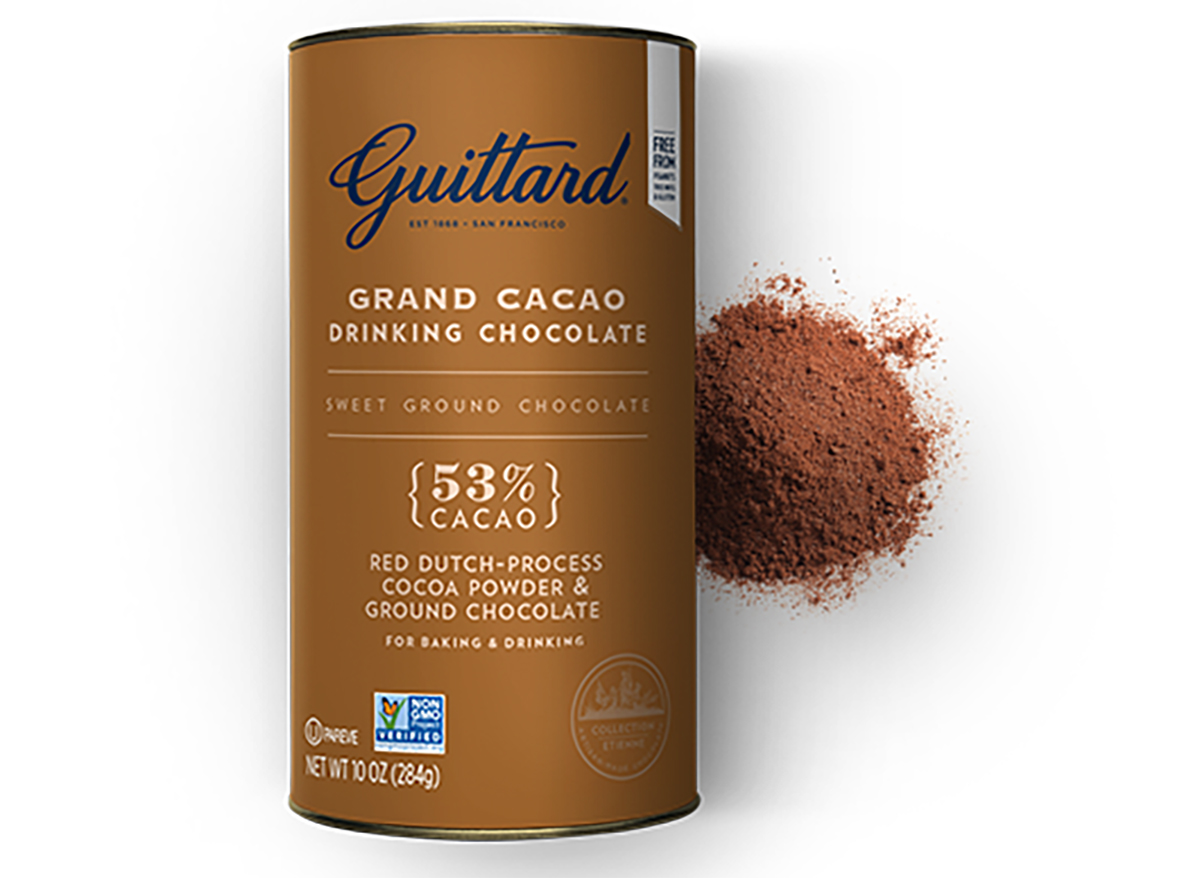 No one could seem to agree on this one: Comments ranged from "a nice velvety texture," "pleasant brownie-lie aroma," and "really delicious" to "way too thin," and, oddly, "smells like a Whopper." Yes, seriously! One thing is for certain, though: The calorie and sugar content is fairly moderate for something that's essentially liquid dessert in a cup.

This Starbucks mix got dinged for being "chalky," "bland," "slightly salty," and "bitter." But a number of the testers were fans of the "just right combination of flavors," which spanned the sweet, bitter, and smoky spectrums. As far as the nutrition facts go, they're actually fairly good, which is why we gave it such a high-ranking spot on our list.

Among the higher ranking hot chocolates on this list, this one is arguably the easiest one to find. This is great news because 100 calories for a cup of cocoa is an impressive stat—way to go, Swiss Miss! Testers' taste buds enjoyed this mix, too. For many, Swiss Miss' Simply Cocoa tasted "just sweet enough" and had a "very pleasant chocolaty flavor," reminding some of "warm chocolate milk." This cocoa possesses a "delightfully milky" texture that many felt would please kids and adults alike. 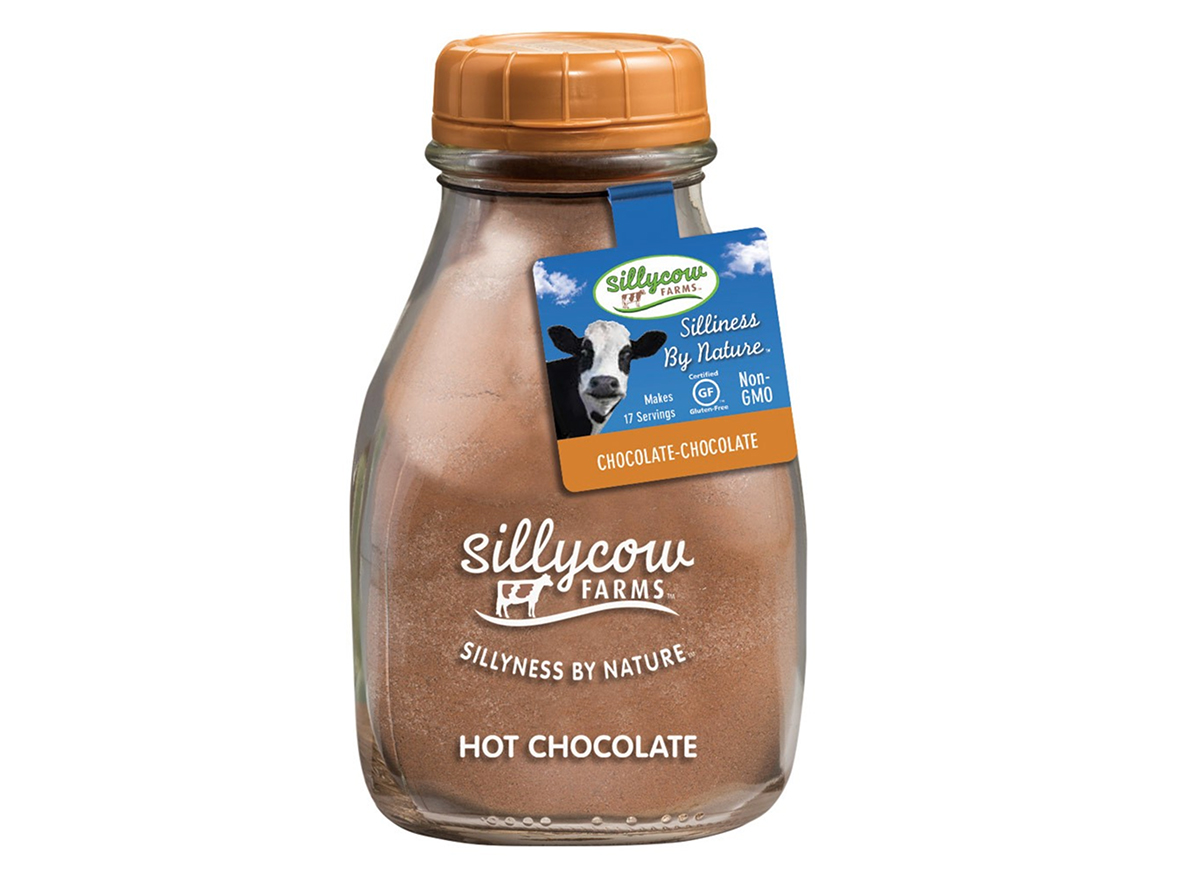 Phrases like "chocolate heaven," "A+," and "perfect for a cold day" were used to describe this low-calorie, rich hot cocoa. Testers noted that Sillycow's sippable chocolate was more of "an adult beverage" than its contenders, thanks to its "amazing velvety consistency." Almost all our testers agreed that it is "definitely worth a purchase."

A previous version of this story was published on January 13, 2020. It has been updated to include the removal of an outdated slide, an additional entry,  proofreading revisions, and corrections to any irrelevant, outdated, or broken links.