Take a peek into the business side of one of the world's most popular beverage.

Coffee is one of the world's most popular beverages, with a staggering 166.63 million 60-kilogram bags of coffee consumed last year, according to Statista. To break that down, a 60-kilogram bag equals 132 pounds, so that's about 22 billion pounds of coffee consumed. Needless to say, coffee is not only popular with consumers, it's also big business.

And there is a fair amount on the business side of the coffee world that companies would really prefer the consumers not know. From dubious cost-cutting measures to the actual amount you spend on the stuff, there are a number of coffee company secrets that you should know before you order your next cup of coffee. Plus, don't miss 30 Secrets Starbucks Employees Wish You Knew.

Restaurant chains prefer dark roasts because they are cheap.

Most quick-service food chains that move a large volume of coffee, from McDonald's to Dunkin' to Starbucks, primarily offer dark roasted coffees. Why? Because they are cheap. When beans are roasted to a darker finish, imperfections tend to be concealed and an even flavor profile created, reports Medium. Never mind that said flavor is often quite bitter.

According to the nonprofit group Food Is Power, many of the workers who plant, tend, and harvest the coffee you enjoy are far from enjoying safe or fair working conditions. In Brazil, the world's largest coffee exporter, for example, most coffee workers earn less than 2% of the final retail price of the coffee they produce. And child labor is a shocking 37% more prevalent in Brazilian regions where coffee is produced. These issues are mirrored in many other coffee-producing regions as well.

RELATED: 28 Secrets About Starbucks, According to Employees 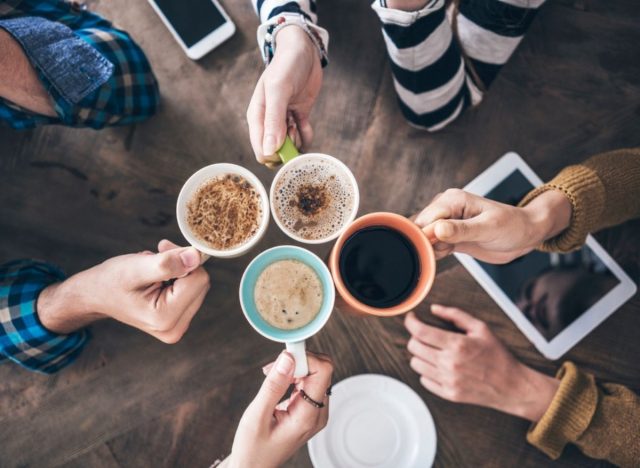 According to Business Insider, a regular-sized cup of coffee from The Coffee Bean & Tea Leaf has 333 milligrams of caffeine, which given the 400-milligram maximum amount of caffeine experts recommend daily, via the Mayo Clinic, is a serving much more potent than you need. It's also more than twice the potency you'd get from a similar-sized cup of coffee from McDonald's, which has 145 milligrams of caffeine. At Tim Horton's, you'll get just over 200. And at Dunkin', expect just over 300.

RELATED: What Happens to Your Body When You Drink Caffeine

You likely spend well over a thousand dollars a year on coffee.

According to numbers collected by The Daily Meal, the average American spends $4.63 per day on a cup of coffee. Assuming you only buy coffee on weekdays, that means an expenditure of $1,208.43 at that average price. So even if you skip a few days now and then, you will still be spending more than a grand each year on coffee if you are buying it outside the home.

The markup on coffee is huge.

Coffee companies charge many times more than their costs for their menu items. While obviously, they need to make a profit, the level of markup is pretty surprising. According to Better by Today (via NBC News), a cup of brewed coffee costs a company about 30 cents to produce, but is usually sold for around two dollars. That's about a 6.6 times price hike.

RELATED: Coffee Habits That Are Aging You Faster, Says Dietitian

Dunkin' wastes an amazing amount of coffee each year.

The official policy for Dunkin' employees is to discard pots of coffee after they have sat for 18 minutes. That can lead to full or nearly full pots of coffee—perfectly good coffee, really—being discarded. Yes, customers get a fresher product, but it's a terrible waste.

Decaffeinated coffee may not be the no-strings-attached alternative beverage you think it is. That caffeine? It occurs naturally in coffee beans, after all, so it takes a rather unnatural process to remove it. Namely, it takes chemicals such as methylene chloride. Said chemicals may have deleterious effects on the nervous system and can even contain carcinogens that can increase cancer risks.

Yes, you really can develop an addiction to coffee. Or to the caffeine in the stuff, that is. In fact, according to Health Line, caffeine is often considered the most widely used drug on the planet. While beneficial for its ability to enhance energy and focus, caffeine becomes a problem when regular consumption of large amounts of coffee changes the brain's chemistry, such as overproduction of adenosine receptors.6254a4d1642c605c54bf1cab17d50f1e

You can overdose on caffeine.

It's not an easy feat to ingest enough caffeine to cause a medical emergency, but according to The Daily Meal, it's not impossible, either. If an adult of average size consumes some 1,200 milligrams or more caffeine in a short enough period of time, the health effects can include a racing heartbeat, headaches, and even hallucinations and seizures.

Ugly Side Effects of Drinking Coffee, According to Science

The Worst Coffee Habit If You Have High Cholesterol, Says Dietitian

Steven John
Steven John is a freelancer writer for Eat This, Not That! based just outside New York City. Read more about Steven
Filed Under
Coffee // Drinks // Fast Food // Health Tips