23 Discontinued Cereals That Deserve a Comeback

Cereal is the best breakfast food. Hear us out on this. The variety is practically endless, and there's a cereal to suit every single taste. Whether you want sweet or healthy or something in between, there's cereal for you—unless your favorite is one that was discontinued at some point.

For many of us, cereal was a staple breakfast growing up. It was easy to eat quickly before running off to school. But so many nostalgic cereals don't exist anymore. Who remembers Sprinkle Spangles? Or Waffelos? These cereals have been taken out of production but will never be taken out of our hearts and memories. So, with that, let's revisit some of the discontinued cereals from our childhoods, going back to the 1970s.

This thematic cereal might be one of the best things to come out of the 1970s. The cereal itself was deliciously sweet for breakfast, but each box had magic tricks inside. Magic tricks! With each box of cereal! If you were one of those kids who demanded your parents buy a box simply to get the magic tricks inside, we wouldn't blame you.

A lot of people seem to have jumped on the trend lately of making tiny cinnamon rolls and turning them into cereal, and we can only assume it's because they desperately miss this '90s cereal. Yes, there used to be a cereal you could buy that was miniature cinnamon roll buns, and we're still sad Kellogg's stopped making it. But now at least we know it's easy enough to recreate at home.

Eating a bowl of Hidden Treasures was quite literally a treasure hunt. The little bite-size pieces were filled with a fruity center—but not all of them! It was the ideal situation because it meant you weren't getting too much filling in each bite, but you were so excited about finding the filling that you kept eating and eating. We're always down for making breakfast into a game.

And for some better-for-you choices, here are The Best Healthy Cereal Options You Can Buy.

Similar to Cocoa Puffs, Crazy Cow cereal turned your milk chocolate. Or, if you had the strawberry flavor, it turned your milk strawberry. The cereal was released in the late 1970s and saw a big push in sales from Star Wars fans when they started putting trading cards in the boxes. Alas, it wasn't meant to last forever, and you can no longer find this fun cereal.

Star Wars and cereal go hand in hand. In the 1980s, we were all enjoying C-3PO's, a honey-flavored cereal similar to cereal but shaped like little B's and 8's. This cereal conveniently came out right after the first Star Wars trilogy wrapped, but it didn't stick around for long. And though this cereal could easily be brought back—Star Wars hasn't exactly gone away—it hasn't been.

Mini Trix came and went in a flash. This cereal was released in the mid-2010s and was exactly what it sounds like: mini Trix pieces. Whereas the classic Trix cereal is small fruit-shaped pieces, Mini Trix were tiny fruit-flavored pellets. Similarly to other small-size cereal, though, it soaked up the milk quickly, so you had to eat fast unless you wanted to eat milky mush.

RELATED: The Most Popular Cereal the Year You Were Born

Sadly, this cereal from the '80s didn't last because it's seemingly the perfect formula for a breakfast treat. Kellogg's creation was quite simply toasted rice cereal with marshmallow pieces. It was basically the ingredients for Rice Krispie Treats, so why did it go away? We're still very unhappy about this and would like this cereal to come back.

And for more throwbacks, check out these 27 Lunchbag Staples from the 1990s You've Forgotten About.

For those days when you didn't have time to make actual waffles, there was Waffelos cereal. The breakfast selection from the 1970s was tiny little crunchy waffle bites flavored with maple syrup, and they were better than any other waffle cereal to come after it. They even made blueberry-flavored Waffelos in the 1980s, but now, they're gone for good.6254a4d1642c605c54bf1cab17d50f1e

What's not to love about Sprinkle Spangles? This cereal was like mini sugar cookie pieces in a bowl. The popular '90s cereal was sweetened corn puffs covered in rainbow sprinkles. Like we said: What is not to love? Also, the box was colorful and had sprinkles all over it, and the name was fun. Despite how popular it might have been in the '90s, though, this cereal did not last.

Pac-Man had his own cereal in the 1980s. Like many kinds of cereal, it was sweetened corn puffs with marshmallow bits. Naturally, the marshmallows were shaped like Pac-Man characters. However, this cereal went the way of Pac-Man himself, who is just not quite as popular now as he was in the '80s.

RELATED: 17 Failed Fast-Food Chains From the '80s You Have to See

Remember when Banana Frosted Flakes existed for a hot second? It was back in the early 1980s, and this early rendition of Frosted Flakes not just had banana flavoring, but there were little bits of bananas too. For those of us who love to put sliced bananas in cereal anyways, this breakfast option was ideal.

Cap'n Crunch has had a lot of cereals in its family. Like, a lot. Quaker billed Choco Donuts as one of its "Oops!" cereals, claiming they were made by accident. And you know what? Maybe originally they were. Maybe Quaker didn't set out to create tiny rings of chocolatey goodness that look like teeny tiny donuts. But maybe once it happened, they threw some sprinkles on for extra convincing and called it a day. We're just glad they did it all and very, very sad they were discontinued in the early 2000s.

General Mills loves its monster cereals. Yummy Mummy was also called Fruit Brute for a bit, but neither iteration exists anymore alongside the other monsters: Count Chocula, Boo-Berry, etc. Yummy Mummy, which we only got to enjoy in the late '80s and early '90s, had marshmallow bats in it, which were the best part of this cereal. 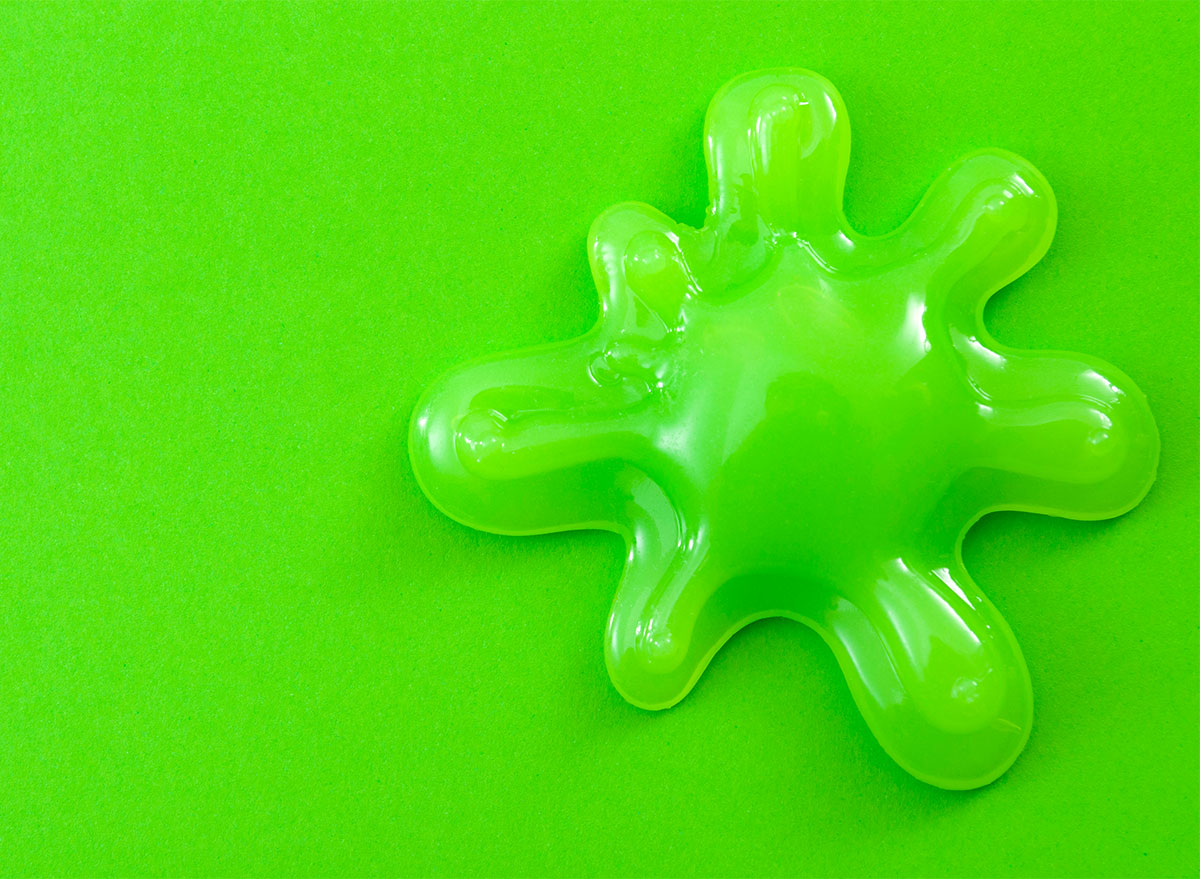 We love a promotional product! To promote the 2003 Kids' Choice Awards, Nickelodeon made this Green Slime cereal that was green and orange—not exactly the most appetizing color combo for a meal. However, when you're a kid, you don't care as long as it's sweet and tasty, and that's exactly what this marshmallowy cereal was.

The 1980s gave us Nerds Cereal, and if you think making a cereal out of a tiny sour candy may not be a good idea, well, maybe you're right, but we loved this cereal anyway. The oddball shape of the cereal pieces was reminiscent of Nerds candy, and the cereal even came split into two bags. We miss the novelty.

And for more nostalgia, check out these 15 Lunch Bag Staples from the 1980s You've Forgotten About.

This cereal box just screams "'80s." The sweet cereal was multicolored, just like our favorite doll, Rainbow Brite. It didn't taste like much more than sweet, but as kids, we didn't care, we just liked that it had the same colors as our dolls.

The 1980s also gave us Powdered Donutz Cereal. These 3D shapes—which just looked like Cheerios—were on the sweet side to go after a younger demographic, which totally worked. They also came in a chocolate flavor, which was the perfect way to start the school day.

There have been many s'mores cereals on the market over the years, but we have a soft spot for this one from the '80s. This one took Golden Grahams and made them chocolate before adding marshmallows to the mix. It was sweet, delicious, and felt like summer.

RELATED: This Is The #1 Most Popular Snack Food in the World

Nickelodeon, yet again, rolled out a thematic cereal, this time in the 1990s to coincide with Rugrats. The cereal, though, was all about the best Rugrats character, Reptar, so it was dinosaur-shaped. Who doesn't love a dinosaur-shaped cereal? This cereal was sweet and delicious but only lasted for a little bit.

These 1970s cereals were "rivals," so we'll put them together. Each was fruit flavored with a ridiculously fun mascot on the front, hence their names. These cereals also included "starbits," and if you can't recall what those are, well, they were just marshmallows. But they sound way cooler as starbits, no?

And for more throwbacks, Only 1970s Kids Will Remember These Restaurants.

The Smurfs were many people's favorite characters from childhood, and we were happy to chow down on Smurf-Berry Crunch in the 1980s. The cereal was blue and red pieces of sweet goodness. But as The Smurfs got less popular, so did the cereal.

The heroes in the half shell got their own cereal in 1989, complete with pizza-shaped marshmallows. The marshmallow shapes also included the turtles' weapons, but the pizza was the real star. The cereal itself was supposed to look like little nets, but it was pretty much just Chex. It didn't matter; we loved it, along with the plastic bowls the cereal was packaged with.

Remember in the good old days, when Trix was shaped like the fruit it was supposed to taste like? While Trix is technically still being produced, it's not in the same shape, which breaks our hearts. We miss the old shapes from the early 2000s, even if the puffs taste the same. The shape matters!

And to keep the nostalgia going, check out: