From fluffy donuts to frozen coffee drinks, here are the least healthy (and healthier) menu items at DD.

Dunkin' Donuts offers some of the most quintessential drive-thru breakfast foods in America. Before work, patrons who pull up or walk in can expect to order something savory like an egg-filled breakfast sandwich and a coffee, or, maybe veer on the side of sweet and pick out a donut paired with a flavored latte off the Dunkin' Donuts menu.

However, like all fast food restaurants, it's important that you be mindful of what it is your ordering because a lot of these menu items are chock-full of calories, fat, sodium, and sugar. We decided to scour the menu and pinpoint some of the least healthy options as well as some of the healthier ones as well.

This muffin is nearly 600 calories and 90 grams of carbs! A Big Mac from McDonald's contains less calories and carbs than this muffin does at 540 calories and 46 grams carbs. Not to mention, this baked good packs 51 grams of table sugar—far more than what you should consume in a day. According to the American Heart Association, women should have no more than 25 grams of added sugar and men should not exceed 36 grams each day in order to maintain good heart health. We suggest you pass on this baked good.

The chocolate chip muffin is no better. Clocking in at a whopping 550 calories, this muffin will cost you about 25 percent (or more) of your daily calories, and all before 9 a.m.

Dunkin' Donuts is known for their, well, vast donut selection, right? One of the worst ones available in that mouthwatering donut cabinet is the maple crème stick. This doughy, cream-filled pastry is packed in calories and fat. If you're following a 2,000-calorie diet, 11 grams of saturated fat kills about half of your daily allotment of the stuff. According to the Cleveland Clinic, you should limit your saturated fat intake to no more than 22 grams per day.

To be clear, this is not the best breakfast option on the menu—it's just better than most of the donuts (and muffins) that are offered on the menu. This cup of oatmeal packs a whopping 35 grams of sugar, a majority of which is added sugar. The second and third ingredients on this list are sugar and brown sugar, and what follows also contributes to the high sugar content: raisins and sweetened dried cranberries. You're better off eating five Cinnamon Munchkin donuts for 300 calories and only 10 grams of sugar. At least you get some antioxidants and fiber from the dried fruit in the oatmeal. 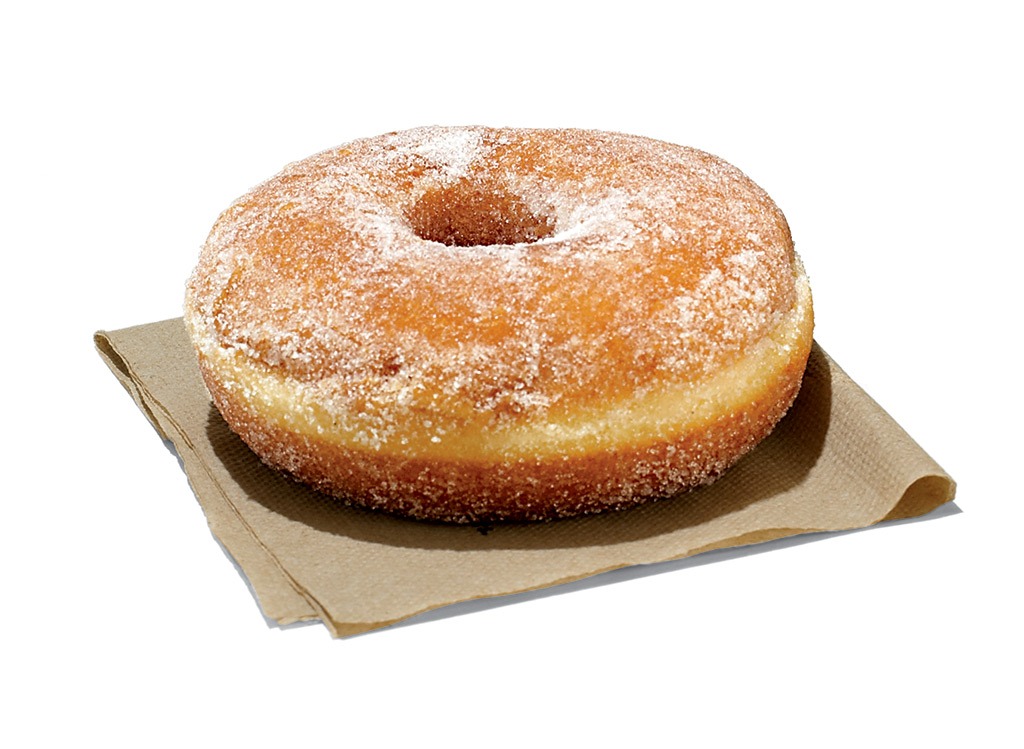 When you go to Dunkin' Donuts, it's hard not to get a donut with your coffee. If you're going to get one, just make sure you get one that leans on the healthier side. The sugared donut is a great example, at less than 250 calories and with only 30 milligrams of sodium and 4 grams of sugar. For comparison, a Chocolate Crème stick donut costs you 480 calories, 360 milligrams sodium, and 33 grams of sugar.

Going off the same tangent as above, it's hard to waltz into a Dunkin' Donuts and not feel allured by the smell of freshly made donuts. Another less caloric and not-as-sugar-laden selection would be the vanilla frosted donut.

This breakfast sandwich is loaded in calories, fat, and sodium. In fact, this sandwich packs about as much saturated fat as you should consume throughout the entire day. For comparison, you could eat about three tablespoons of butter straight for an equivalent amount of saturated fat.

If the calories and fat content weren't alarming enough, the sodium content is even more concerning. The American Heart Association recommends that you consume no more than 2,300 milligrams of sodium each day, and this sandwich alone comprises almost 1,500 milligrams worth, which is nearly two-thirds of your daily intake—all in your first meal of the day!

Craving a sandwich from DD? Order the Veggie Egg White for just under 300 calories and 14 grams of satiating protein!

If you do prefer to eat eggs with the yolk, you still can without hiking up the calories and sodium content too much. Order this Wake-Up wrap to go and pair it with a cup of fruit or serving of veggies from home to make it a more complete meal.

This drink contains 2 grams of trans fat, which raises the harmful kind of cholesterol known as LDL while lowering the healthy kind of cholesterol called HDL. Regular consumption of trans fats increases the risk of developing cardiovascular disease. If you must order a frozen coffee, opt for the small size with skim milk and no added flavors for 280 calories and zero grams of trans fat. It's still not the healthiest choice as it packs 63 grams of sugar, but it's definitely better than this cream-based caramel swirl variety.

This beverage has more calories than the sausage, egg, and cheese bagel and exactly double the number of carbs. Steer clear of this drink, and you'll dodge consuming 4-5 days worth of added sugar.

At Dunkin' Donuts, the Frozen Chocolate is described as an indulgent treat, which must be code for sugar-laden. In a medium, there are 125 grams of sugar—yikes!

If you need a coffee fix but want to dodge added sugar, opt for an iced macchiato with skim milk for only 11 grams of the sweet stuff.

This drink only contains three grams of added sugar, and that's all from the almond milk! Order this to satisfy your caffeine craving.

This latte only comprises two ingredients: skim milk and brewed espresso coffee. This means that the 15 grams of sugar come solely from lactose, the naturally occurring sugar in milk, and the 10 grams of protein also come directly from the milk. Skip the whip and added sweeteners to keep this drink low in calories and sugar.

This latte contains more sugar than two 1.55-ounce Hershey chocolate bars. Need we say anything else?

We get it, this drink looks utterly irresistible, but it will cost you a lot of saturated fat and sugar. If you must get something with mocha in it, try ordering a small mocha swirl latte with skim milk for 180 calories, 0.5 grams of fat, and 35 grams of sugar.

Which will it be, the Oreo flavored hot chocolate from DD or about 11 Oreo cookies? That's right, they both contain the same amount of sugar.

You can order a cappuccino with whole milk, which offers satiating fat and protein, without all of the added sugar from sweeteners.

Sometimes you just have a hankering for a piping hot cup of creamy hot cocoa, and there's absolutely no shame in that. Instead of ordering a medium Oreo-flavored and sugar-filled version, opt for the small original hot chocolate.

There's nothing more classic than a cup of hot coffee with some whole milk stirred in, and it also happens to be one of the healthiest coffee drinks you can order on the menu.