McDonald's keeps innovating to attract new customers, but these former menu items might just have you feeling nostalgic.

For many people, McDonald's holds a special place in our hearts, with visions of Happy Meals, Big Macs, and birthday parties held at Play Places interwoven into the fabric of our childhoods and adult lives. However, while certain items will always be part of our Micky D's memories, like Chicken McNuggets and broken ice cream machines, the menu has actually undergone some pretty significant evolutions since the company was founded in 1958.

Although there may be a few relatively healthy foods at McDonald's, many of their options over the years have been strange, short-lived, or downright bad ideas. Before you grab another McDonald's meal, take a trip down memory lane by discovering what surprising foods the chain used to serve.

And for more nostalgia, check out these McDonald's Is Releasing These 50 Nostalgic Happy Meal Toys.

While the Chicken McNugget remains one of the most-ordered fast food items out there, back in the 1960s, McDonald's tried its hand at another chicken recipe: classic Southern fried chicken. Unfortunately, McDonald's couldn't keep up with other popular chicken chains, like KFC, and eventually took the fried chicken off the menu. And that was before the new king of fast-food fried chicken, Chick-fil-A, came to play. If you're looking for a fried meal that won't break the calorie bank, don't miss Every Item at Chick-fil-A—Ranked!

Back in the 1970s, McDonald's was more than just a place to get burgers and fries—it was a pizza joint, too. The ill-fated McPizza was on and off the menu for over two decades, finally getting ditched for good in 2000. Its main problem? McDonald's has always prided itself on how speedily its food gets from cook to customer, but the McPizza took a whopping 11 minutes to prepare, slowing down restaurant operations and taking their reputation as a "fast" food chain down a few notches.

We've all heard of the Chicken McNugget, but back in the 1970s, McDonald tried to expand its nugget line with the onion nugget. Yes, that's exactly what it sounds like: a chunk of onion breaded, deep-fried, and served with dipping sauce. Unsurprisingly, the onion nuggets weren't a huge hit, and the chain axed them only shortly after they were introduced.

'80s babies may remember the McDonald's McDLT burger, which tried to solve the age-old riddle of how to keep veggie ingredients from turning hamburger buns into piles of wet mush, or, as their advertising campaign suggested, to keep cool items cool and hot items hot. The burger came in a special box that kept the lettuce, tomato, and pickles on one side and the burger on the other, leaving the customer to assemble it themselves. Sadly, the McDLT wasn't as well-received as the chain had hoped, and it was discontinued in 1987.

Back in 1990, McDonald's tried to expand its chicken offerings once again, rolling out the spicy, deep-fried chicken wings known as Mighty Wings. These crispy wings may have been a hit if it weren't for their price, which was significantly higher than virtually every other offering on the McDonald's menu. However, despite their initial failure, McDonald's brought back the wings in 2013 at a discounted price and tried to launch them in Atlanta once again in 2016.6254a4d1642c605c54bf1cab17d50f1e

The '90s were all about going low-fat, which may have been the reasoning behind the launch of the McLean Deluxe. This reduced-calorie version of the Quarter Pounder was made up of largely lean beef, although 10% of its formula was just water and carrageenan, a seaweed binder that is often used to prevent separation and improve the texture of nut milks. Sadly, this supposedly healthy option failed to earn the admiration the chain sought and was subsequently discontinued.

Highlighting just how strange the '90s were is the rollout of the Diet Coke Float in 1991. Weight-conscious consumers could enjoy a scoop of vanilla ice cream in their calorie-free soda and feel like they were doing something good for both their waistlines and the world, with 1/4 of every sale going to Ronald McDonald children's charities. 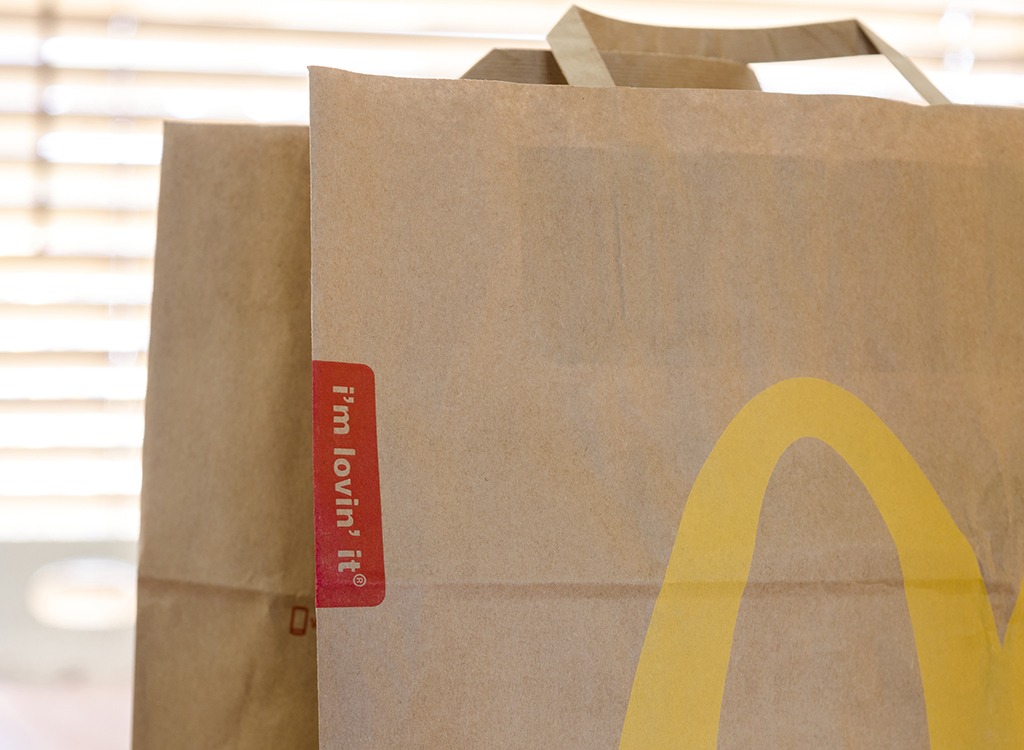 If you were born in 1993, you might just share a birthday with one of McDonald's many '90s rollouts, the McStuffins. Similar to a Hot Pocket, this enclosed sandwich came in a variety of fillings, none of which garnered sufficient popularity to keep the McStuffins on the menu past '93. 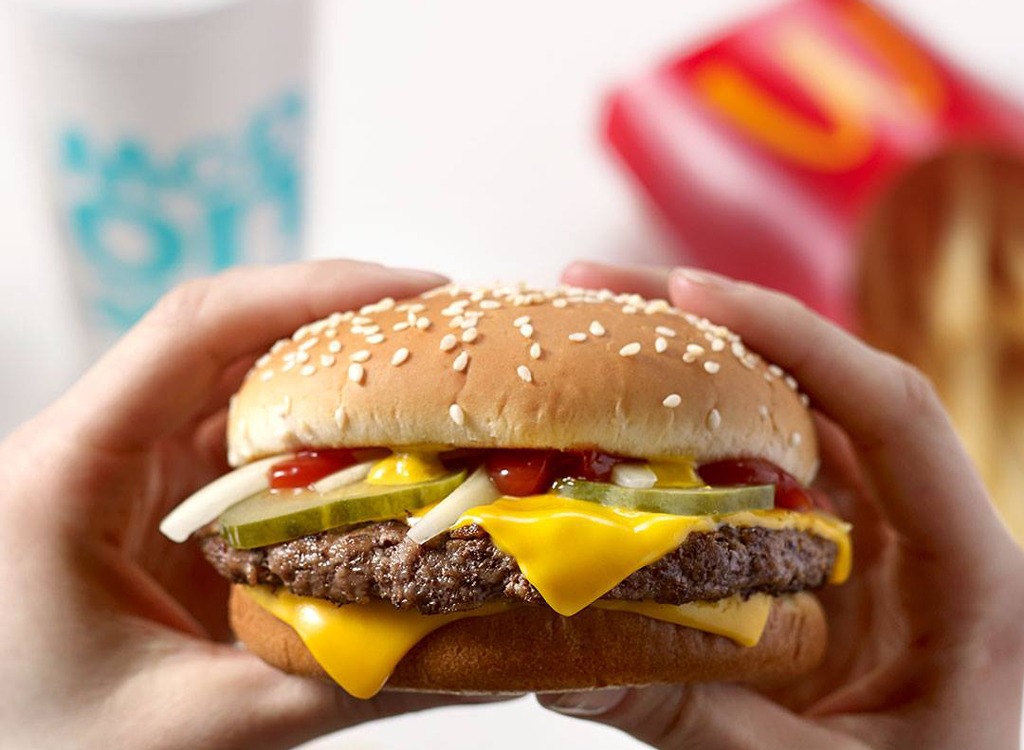 While it's hard to imagine most superheroes chowing down on greasy McDonald's snacks before fighting crime, that's exactly what the company was going for with the Superhero Burger in 1995. This triple-patty burger, launched as a tie-in with Batman Forever, was also sold under the name the Triple-Double Burger, and named after local sports stars in certain markets, like the Boselli Burger, a tribute to Jacksonville Jaguars star Tony Boselli.

And if you're really feeling nostalgic, check out these 30 McDonald's Facts All '80s Kids Remember.

2002 babies share a birth year with McDonald's Mini Corn Dogs, a bite-sized version of this popular carnival snack. However, this wasn't the first time the chain tried to make fair food a part of the menu. In 1991, the same dish was offered as Corn Dog McNuggets, and through 2012, McDonald's sold popcorn chicken, another carnival classic, off and on.

RELATED: 30 Classic Comfort Foods From Your Childhood Everyone Loves

While apple pie is still a staple on the McDonald's menu today, the recipe has changed significantly over the past two decades. So what's different? For many years, McDonald's was deep-frying its pies to achieve a crispy exterior and hot and gooey interior. However, it turned out that deep-fried pie might even be pushing the limits of people who regularly order Big Macs, so the chain opted for a baked version in 1992.

Here are some secrets about your favorite chains you never knew:

Sarah Crow
Sarah Crow is a senior editor at Eat This, Not That!, where she focuses on celebrity news and health coverage. Read more
Filed Under
Fast Food // McDonald's