It's finally summer, which means you're hopefully breaking free of your 9-to-5 and fitting in some well-deserved vacation time. But before the R&R can commence, most of us have to hop on a train, plane, car, or boat—a painful realization for those prone to motion sickness. Motion sickness occurs when the body, inner ear, and eyes send conflicting signals to the brain. For example, if you're on a bumpy plane ride and can't see out the window, your inner ear will detect the movement, but your eyes won't be able to see it. When this happens, your senses and your brain become confused, causing dizziness, headache, nausea, and vomiting. (Fun fact: Some experts think that spewing occurs because the brain assumes the sensory confusion is a result of ingesting a toxin and wants to get it out of your system, stat!)

The good news is that you don't have to suffer. There are a number of steps you can take to ward off motion sickness symptoms before they even occur. Read on to find out which foods to eat before you get moving, as well as which ones to avoid. (Hint: Much of the McDonald's Menu is a no go.) And for those of you with particularly sensitive stomachs, we've also gathered a host of other hacks—nutrition-related and otherwise—that can help keep nausea at bay.

IF YOU'RE GOING ON A ROAD TRIP

For many of us, summer is synonymous with long car trips. With the windows down, the music up, and the world at your fingertips, it seems like the perfect recipe for an unforgettable time away. But with the ever-growing popularity of smartphones and backseat DVD players (both of which are stationary) motion sickness is a side effect few of us can avoid. The best way to reduce queasiness is to sip a protein drink, says motion sickness expert Robert M, Stern, Ph.D. "It used to be thought that things like crackers were best [for car sickness], but from our work, we have decided that protein would be even better," he says. To make sure you're prepared if you get hit with a bout of nausea, bring a shaker bottle filled with a scoop of protein powder and a bottle of water or a shelf-stable milk alternative to mix it with. This way you can prep a shake whenever ill feelings come on. For longer rides, throw a few single-serve powders in your bag (or make your own by scooping out individual servings into resealable sandwich bags) so you can shake up multiple mini-meals during the trip.6254a4d1642c605c54bf1cab17d50f1e

Poor vehicle ventilation can bring on and exacerbate nausea, as can sitting in the back seat. Offer to be the driver or call 'shotgun' and focus on the horizon or a stationary object outside the window (this helps the inner ear and brain stay in sync) and then position the air vents toward your face to keep motion sickness at bay; heat tends to worsen symptoms.

IF YOU'RE TAKING A FLIGHT 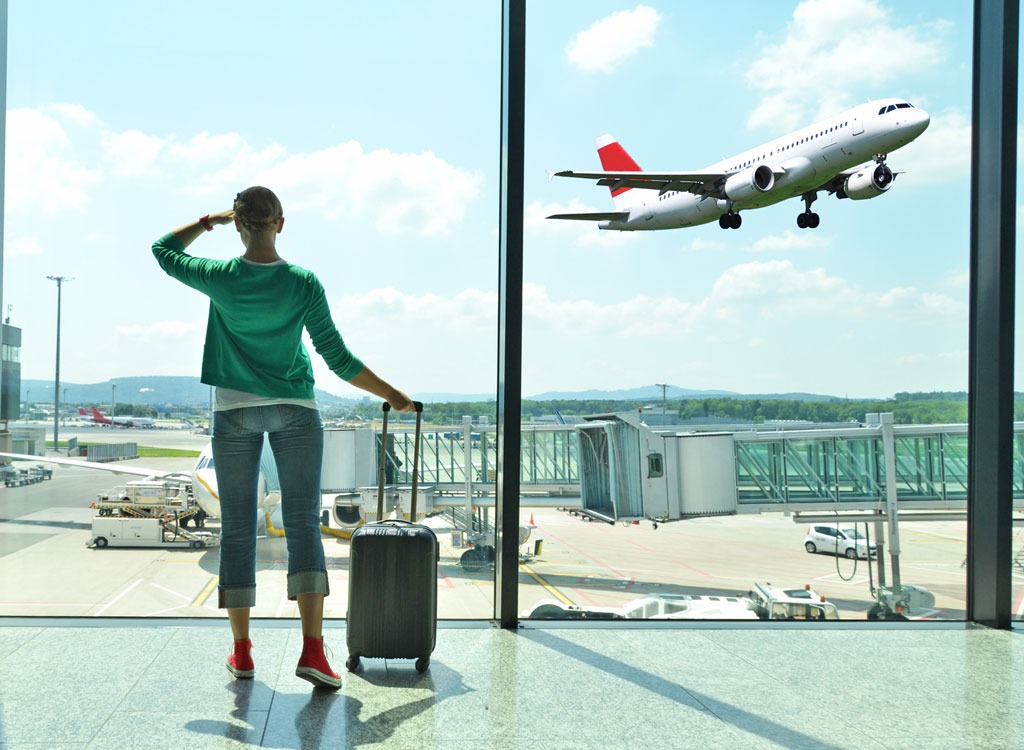 Dehydration is a major trigger for motion sickness so it's best to avoid caffeine, in-flight cocktails, and anything super salty (like food court French fries and those classic airplane peanuts). Your best bet: Grab something that's light yet protein-packed before taking off—like a salad topped with grilled chicken, grilled fish, or hard boiled eggs. In one study, subjects felt up to 26 percent less nauseated when they consumed a protein-packed meal before taking off, compared to those who consumed carb-rich meals or nothing at all. If you'll be on a longer flight, pack a non-perishable high protein snack to nibble on in case you start to get queasy. Despite what you might assume, the TSA isn't interested in confiscating your KIND bar or almonds.

If you're prone to motion sickness when you fly, request a seat that's over the front edge of the wing so you can look out the window and watch the plane move. (You'll also feel less motion sitting in this location.) Also, turn on the air vent and position it toward your face.

IF YOU'RE GOING ON A BOAT 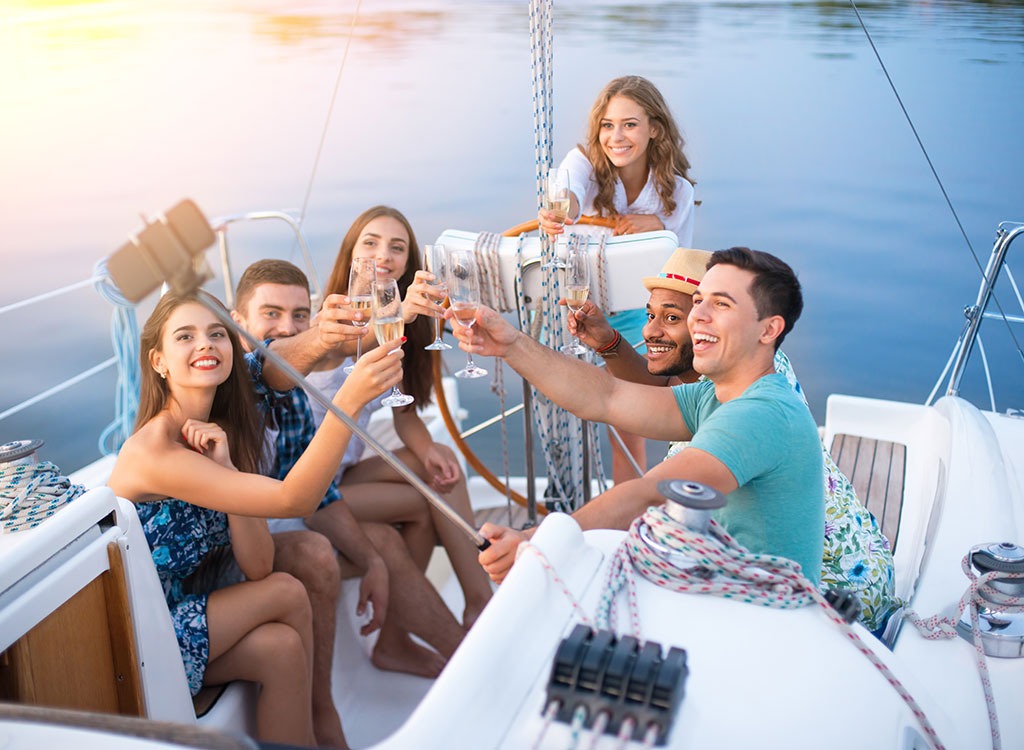 That deep-sea fishing trip or week-long cruise you're taking isn't going to be much fun or relaxing if you're so seasick you want to throw yourself overboard. (Pure coincidence that nausea has the word "sea" in it? We think not.) To keep nausea under control when you're on the high seas, avoid having an empty stomach, as hunger can trigger an upset stomach. Try to eat a small protein-rich snack every few hours. If you're on a cruise, food will never be far away—but it's not always the healthiest options. That said, you might want to stock up on protein-rich options like yogurt and nuts (which many cruise lines provide at breakfast as an oatmeal topping) and keep them in your room. Better yet, bring some of these Plant-Based Protein Bars on board. These grab-n-go nibbles also fare well on boat-based day trips, too. The other thing worth packing:
dried ginger root in capsule form. Studies show they may help ease nausea. (If you have a heart condition, get the okay from your doc before taking ginger as it may have a negative interaction with certain medications. )

When you're cruising, ask for a stateroom that's in the middle of the ship. The same rule applies when you're on a fishing or party boat. The reason: There's less motion in the middle. Also, if you can, try to keep your eyes on the horizon or on land. This will help clear up the confusion between your eyes and your inner ear, easing your symptoms. Another suggestion from Stern: As soon as you feel yourself starting to get getting sick to your stomach take slow, deep breaths to encourage your stomach to contract normally.

IF YOU'LL BE ON A TRAIN 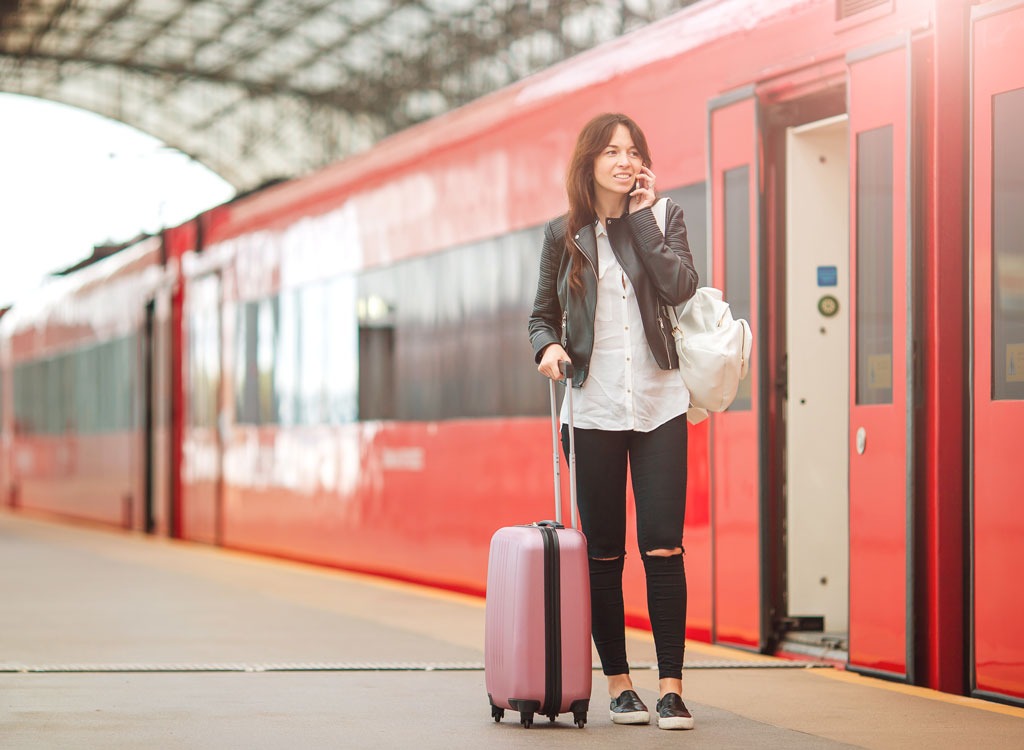 Taking a train to your summer getaway? Be sure to pack some high protein snacks (which you should reach for every few hours) and nibble on something low in fat and high in protein before the conductor calls 'all aboard.' "Greasy meals bring about changes in the body that will contribute to the development of nausea," explains Stern.

Always face in the direction the train is traveling and sit near a window to ward off a headache, sweating, and nausea associated with motion sickness.

IF YOU'LL BE RIDING A ROLLER COASTER 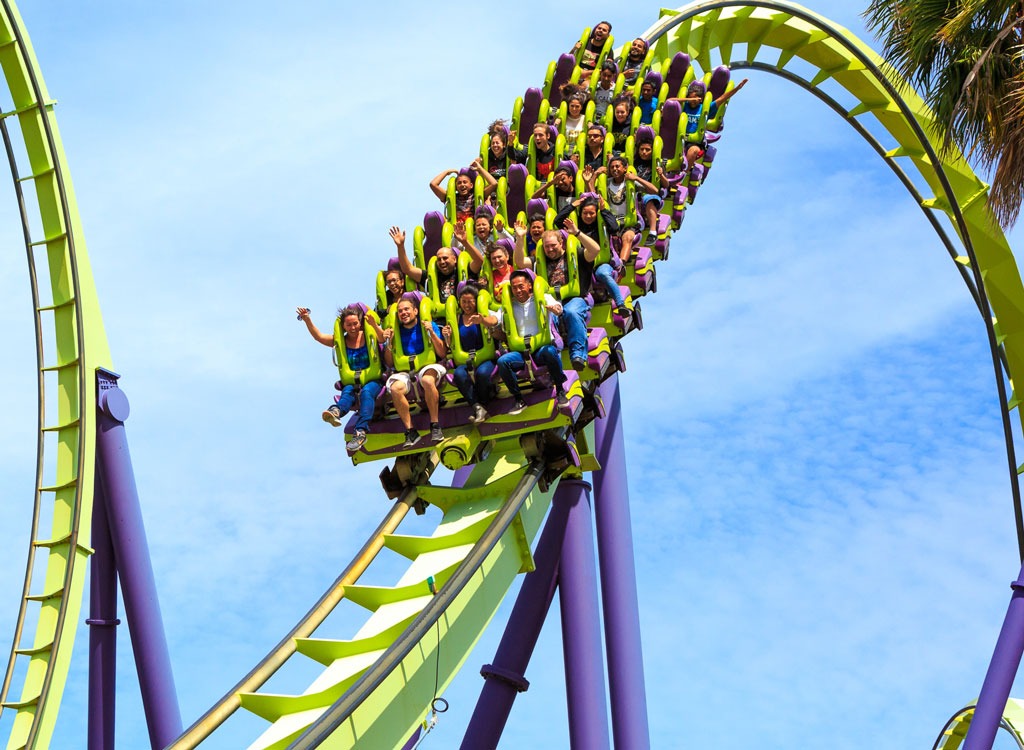 About an hour before you hop on the ride, pop a 1,000- to 2,000-milligram ginger root supplement and eat a small serving of carbohydrates, like popcorn or some dry cereal (which you can easily sneak into the park inside a small Ziplock bag). "When stress hits, your stomach produces acid that can upset it even more [and the] carbohydrates help soak up the acid," explains Dr. Michael Hoffer of the American Academy of Otolaryngology's equilibrium committee. Oh, and be sure to steer clear of spicy, greasy, or fatty meals before heading to the coaster queue—and familiarize yourself with all of these worst theme park foods, too.

To keep you body in sync when you're on a roller coaster, hold on to the handrail, stick up your thumb, and keep your eyes glued to it during the ride. This is the coaster equivalent of looking at the horizon out of a car window.