Coca-Cola Is Launching Several New Flavors of This Beloved Soda

Fans are going to love this innovative new line of sodas.

While Coca-Cola has been busy stretching its reach with new releases, celebrity collabs, and even a revolutionary new coffee machine—it hasn't forgotten about its other beloved soda brands. Right now it is creating some innovative new flavors for its Fanta line, only it hasn't been clear what those taste like just yet.

In a somewhat perplexing release of new Fanta flavors, Coca-Cola has announced an enigmatic launch of limited-edition mystery sodas it's referring to as "What the Fanta?! (WTF)."

RELATED: 8 Oatmeal Brands To Stay Away From Right Now

The new Fanta flavors will feature bright blue, green, peach, and orange shades, however, the corresponding tastes and colors are formulated to "fool the senses." Fans are invited to guess the flavors, which will be a riddle of complex notes to fool your tastebuds. 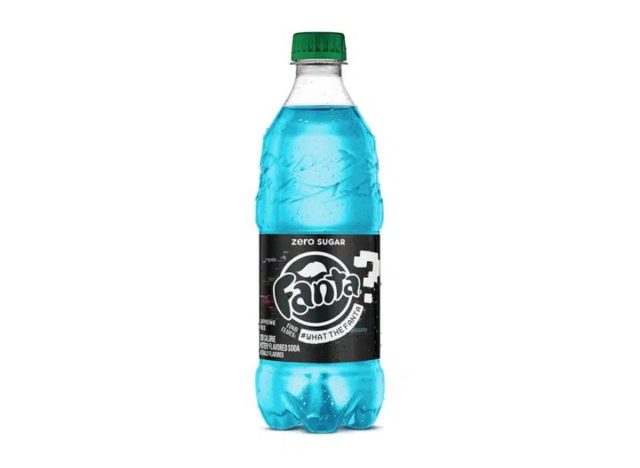 Kicking off the new Fanta lineup will be the blue zero-sugar flavor, available to tase and guess at until early in 2023. After the blue release, more mystery flavors will debut across grocery stores and Coca-Cola Freestyle fountain dispensers over the coming months. The company promises the flavors will be revealed in engaging ways for fans as new drinks are rolled out.

"With 'What the Fanta', we've created a campaign that not only gives our fans new bold flavors to try—we've given them an opportunity to share in the fun and engage with each other across the country in a nationwide guessing game," said Dane Callis, senior brand manager of Fanta in North America in a release on the company's website.

For those not caught up on the latest Coca-Cola news, the iconic company has been busy. The company just released a new Jack Daniel's pre-mixed ready-to-drink (RTD), as well as a strawberry and watermelon drink in collaboration with EDM artist Marshmello, and most recently, announced plans to launch Costa Coffee vending machines called "Costa Smart Cafes" nationwide. 6254a4d1642c605c54bf1cab17d50f1e

Amber Lake
Amber Lake is a staff writer at Eat This, Not That! and has a degree in journalism from UNF in Jacksonville, Florida. Read more about Amber
Filed Under
Groceries // Grocery Shopping // Grocery Stores // News