From recent departures to retro classics.

Take a stroll down burger memory lane, through some of the most popular discontinued burgers of the last few decades.

While most of these burgers were discontinued because they failed to reach the kinds of mass sales that their makers were looking for, they still won over hordes of fans. Fans who, to this day, hope they'll make a comeback.

Here are some of America's favorite discontinued burgers—from recent departures to retro classics.

First launched in 2009, the premium offer that was the Chop House Cheddar Burger quickly became a customer favorite. Even so, the burger never became a permanent menu item, and after several limited-time stints on the menu, it now seems to be gone for good—it hasn't been seen since 2016. However, fans are still holding out hope and have even started a petition for its return. It's gotta be that combo of grilled onions and melted shredded cheddar.

Hardee's original Thickburger went meat-free in 2019. It was part of the chain's trend-chasing push into the plant-based arena, and the burger was only one of four items that were created in partnership with Beyond meat.

But sometime between then and now, Hardee's decided to remove all the Beyond items from the menu, and currently seems to be focusing more on chicken and real Angus beef. 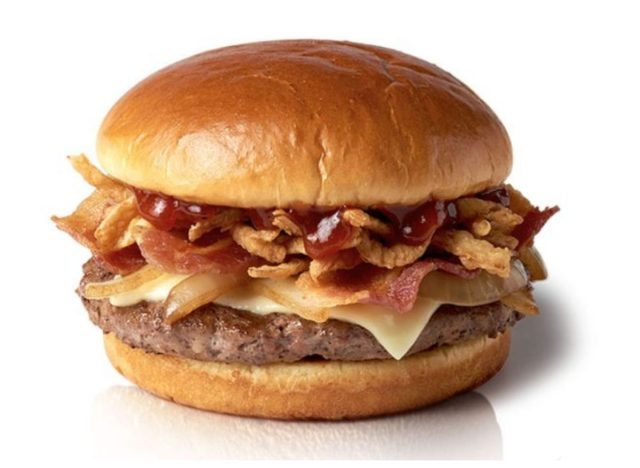 In 2019, when McDonald's decided to simplify its operations and reduce the number of products its kitchens had to stock and make, the fancy, much-hyped line of Signature burgers was the first to go.6254a4d1642c605c54bf1cab17d50f1e

The Maple Bacon Dijon, Sweet BBQ Bacon, and Pico Guacamole burgers, as well as their chicken sandwich counterparts, were discontinued because they slowed operations and didn't bring the kinds of sales McDonald's was hoping for.

Once upon a time, when sliders were all the rage, Jack in the Box tried its luck with Mini Sirloin Burgers. The mini burgers came in three per order, each topped with American cheese, grilled onions, and ketchup. Unfortunately, there can only be one White Castle, and Jack in the Box discontinued the minis for lack of sales in 2011.

Another higher-end burger that couldn't make it on the McDonald's menu was the Angus Burger. Available in three varieties and featuring one-third pound of Angus beef, the item was meant to attract younger customers that gravitated toward premium burgers at sit-down restaurants. But the chain ended up cutting the $4 creation in 2013.

Burger King tried to lighten up the calorie load of its Whopper by offering the first-ever turkey burger by a major fast-food chain. This was in 2013 and, needless to say, the item didn't last on the menus very long.

The Gouda Bacon was another popular limited-time cheeseburger at Wendy's circa 2015. But the chain likes to keep its LTOs fresh and interesting, so it's quite unlikely we'll see this burger again in the same iteration.

Burger King's Big Whopper caused such a stir at McDonald's that the chain ended up creating several burgers to go up against it in the '80s and '90s. First, there was the McDLT, discontinued due to its ridiculous two-sided styrofoam packaging, then came the equally unsuccessful Arch Deluxe. And then there was the last try, the Big N Tasty, which launched in 1997. But even this creation with a catchy name didn't quite catch on, and after being demoted to the dollar menu, the Big N Tasty was finally discontinued in 2011.

In 2008, Burger King wanted in on the slider market, so it re-released its long-gone Burger Buddies as BK Burger Shots. These little burgers came in pairs, attached to the bun, and were undeniably adorable. Still, they ended up disappearing from the menu a few years later.

The first national chain to add blue cheese to a burger, Wendy's was riding the artisanal cheese trend of the 2010s like a pro. The same burger was later brought back in an even better version—nestled in a brioche bun, smothered in blue cheese and blue cheese aioli. Sadly, it hasn't been seen since 2015.

RELATED: This Is the #1 State by Burger Consumption, New Data Shows

Decades ago, Taco Bell tried to compete with fast-food burger slingers by creating its own version of a burger-slash-Sloppy Joe. There was taco beef between a burger bun, topped with diced onions, shredded lettuce, and—if you got the Supreme version—cheese and tomatoes. The sandwich debuted on the menu in the '70s and managed to stick around until the '90s. Still, fans who remember it say it was delicious, and its absence, while understandable, is mourned to this day.

A previous version of this post was originally published on January 28, 2022.