Should you try them? We talked to a registered dietitian to find out.

The right coffee creamer can take a black cup of homemade java and turn it into a barista-blended treat. But, your creamer's ingredients are just as important as the body of your coffee beans—which may cause some hesitation when you're standing in the creamer aisle at the grocery store. Which one should you buy if you're going to be using it every day?

Before the caffeine wears off, here are 12 new coffee creamers you can consider. All are relatively "healthy," but we had award-winning nutrition expert and Wall Street Journal best-selling cookbook author, Toby Amidor, MS, RD, CDN, FAND, take a hard look at the ingredients in order to provide the best (and healthiest) recommendations for using them. Keep reading for her expert nutritional guidance on using this new batch of coffee creamers on grocery store shelves.

And for more shopping news, check out these Grocery Item Shortages To Expect in 2021, According to Experts.

This new coffee creamer's ingredient list is off to a good start and boasts prebiotic fiber, but cane sugar and coconut oil up the sugar and fat content, Amidor notes.

"Once you start adding 4 tbsp of the creamer, the added sugar is 14 grams and the saturated fat is 2.5 grams," she says. "This should be taken into account when pouring your creamer and should count towards your daily added sugar and saturated fat intake."

RELATED: Sign up for our newsletter for the latest healthy eating news.

"This creamer has the exact same issues as natural bliss's Vanilla flavor, with the same nutrient profile for added sugars and saturated fat," Amidor says. "In addition to coconut oil, it contains palm kernel oil which is designated by the 2020-2025 dietary guidelines by Americans as a saturated fat."

Although, it has one nice addition: pea protein! Adding four tablespoons will give your cup o' joe 5 grams of protein, which isn't typically found in a cup of coffee, but it will also contain 14 grams of sugar.

RELATED: Side Effects of Eating Too Much Sugar, Say Dietitians

It's tempting to start the coffee maker when thinking about the flavor of this new gluten-free creamer, but you may want to hold off. Brown sugar may seem healthier, but it's just granulated sugar and molasses, Amidor says. "Added sugar for one tablespoon is four grams, which is equal to the added sugar in one teaspoon of granulated sugar," she says.

In order to keep the sugar on the lower side, try measuring out this creamer and pouring it into your cup before adding coffee. That way, you know exactly how much you're consuming. For more helpful tips, here are the 8 Healthiest Ways to Drink Your Coffee, According to Dietitians.

Like natural bliss's oat milk creamer, the brand's Almond Sweet Crème Creamer is gluten-free. However, it contains one additional gram of sugar per tablespoon. "If you choose to pour more than 1 tablespoon, the added sugars and saturated fat can add up quickly," Amidor notes.

RELATED: 9 Mistakes Everyone Makes When Brewing Coffee, According to Experts 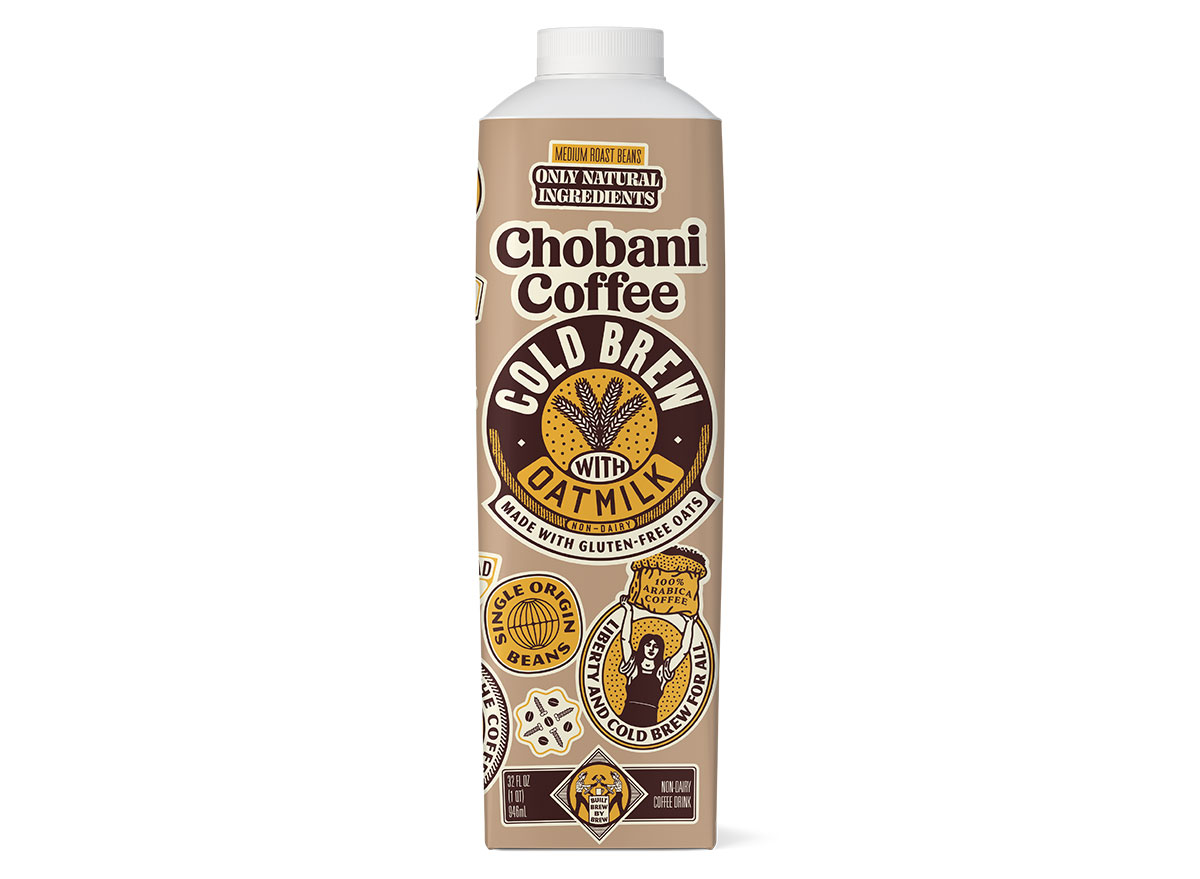 Sure, this isn't technically a coffee creamer, but rather, a premade combo of both coffee and creamer. Conveniently, it's also cold brew (meaning, you don't need to brew your own hours in advance).

Amidor says the rapeseed and canola oils on the ingredient list are great for your heart. Stick to drinking the 12-ounce serving size, and you won't be consuming any saturated fat. But, "it does provide seven grams of added sugar—equivalent to close to two teaspoons of granulated sugar," she notes. 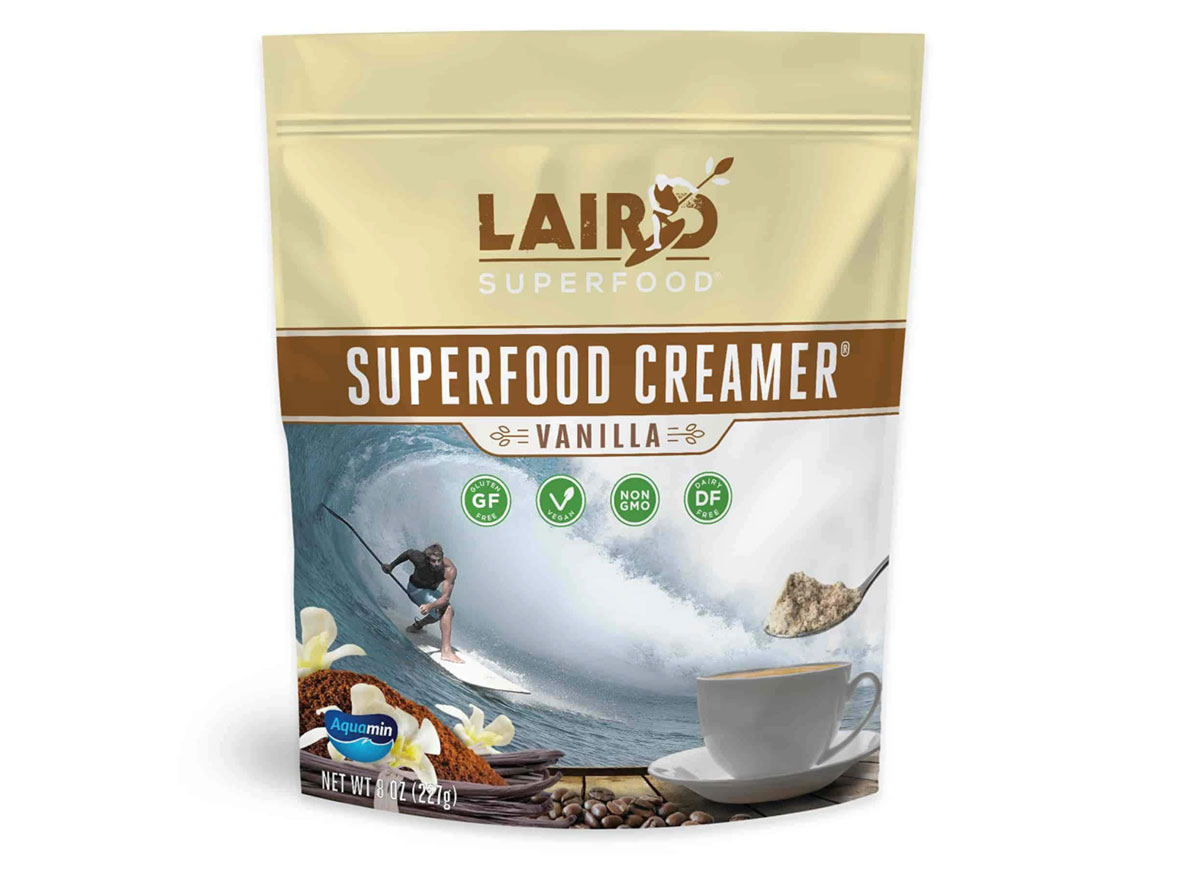 This new coffee creamer only contains seven ingredients and a small amount of sugar, which is a plus. "The first ingredient is coconut milk powder, which provides saturated fat, and the second ingredient is organic maple sugar. Whether it's organic or not, sugar is still sugar," Amidor says. "The added sugar is quite low at two grams, but I do wonder about the taste."

RELATED: 11 Most Popular Foods That Are Loaded With Sugar 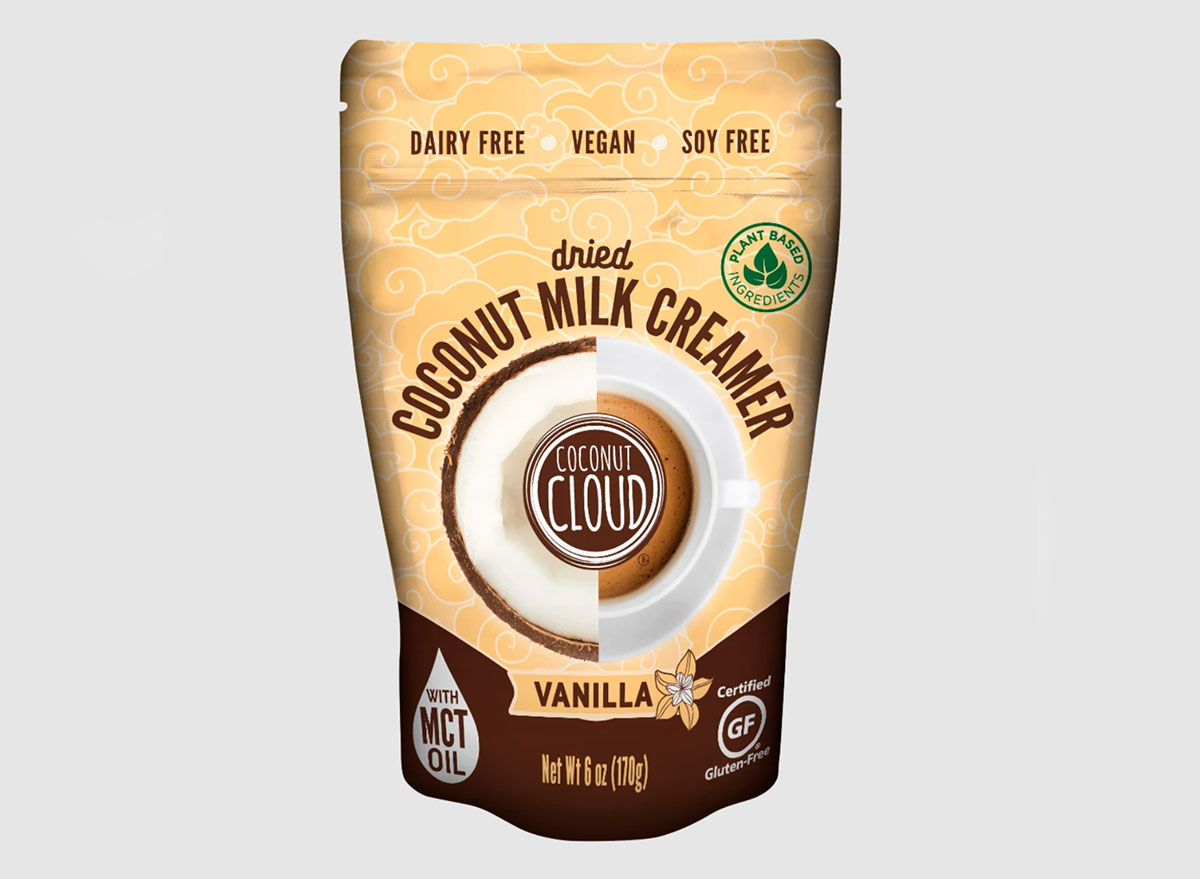 Although the added sugar is also low in this dried coffee creamer, "the use of coconut cream powder increases the saturated fat of this product to two grams for one tablespoon," Amidor says.

Overall, the minimal ingredients make it a good choice to add to your light, medium, or dark roast coffee.

RELATED: One Major Side Effect of Drinking "Several Cups" of Coffee a Day, Says Study. 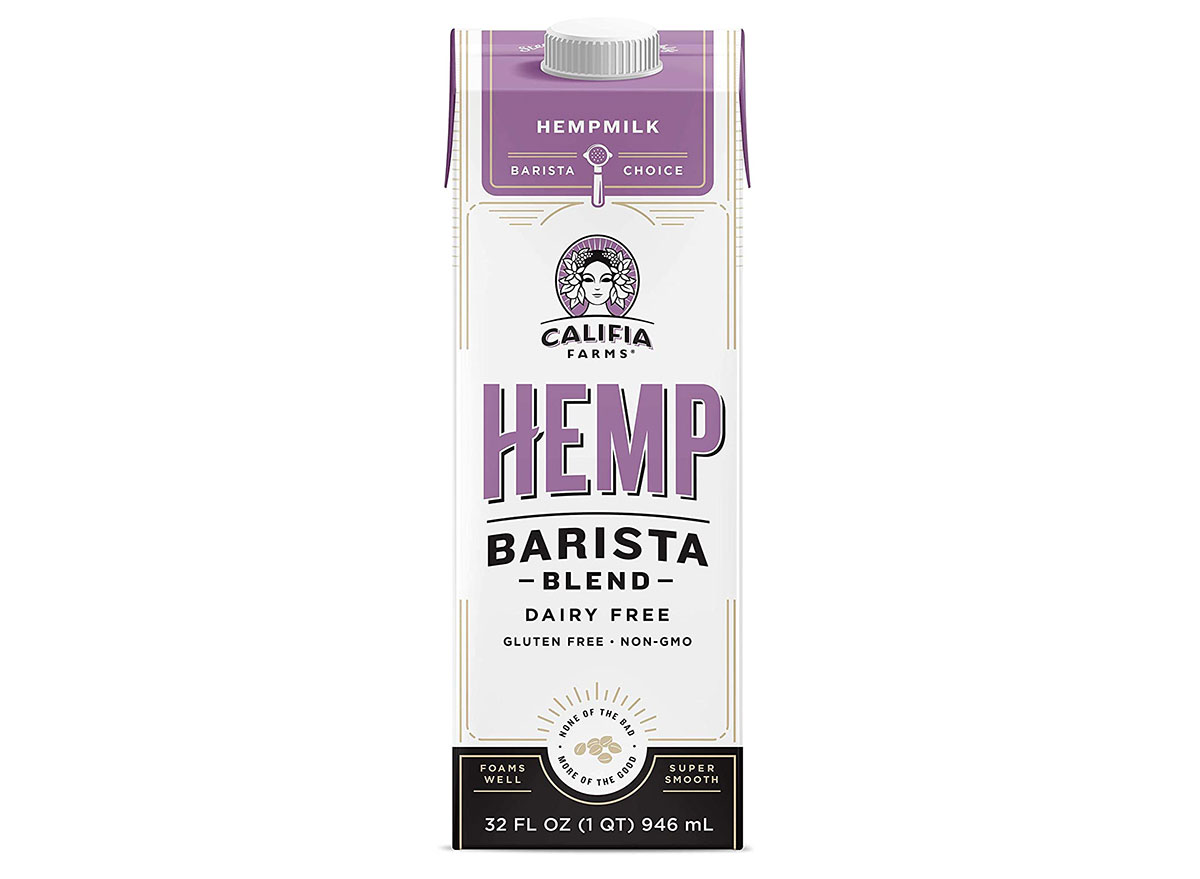 Yes, you read that right… this blend contains no sugar! "Monk fruit is used as the sweetener and that's why the added sugar is zero grams per eight fluid ounces," Amidor says. Keep in mind, though, that the serving size is 8 ounces (or 1 cup) since this is a milk and not a thicker creamer. That said, it does give you quite a bit of calcium with 30% of the daily recommended value while also being vegan. 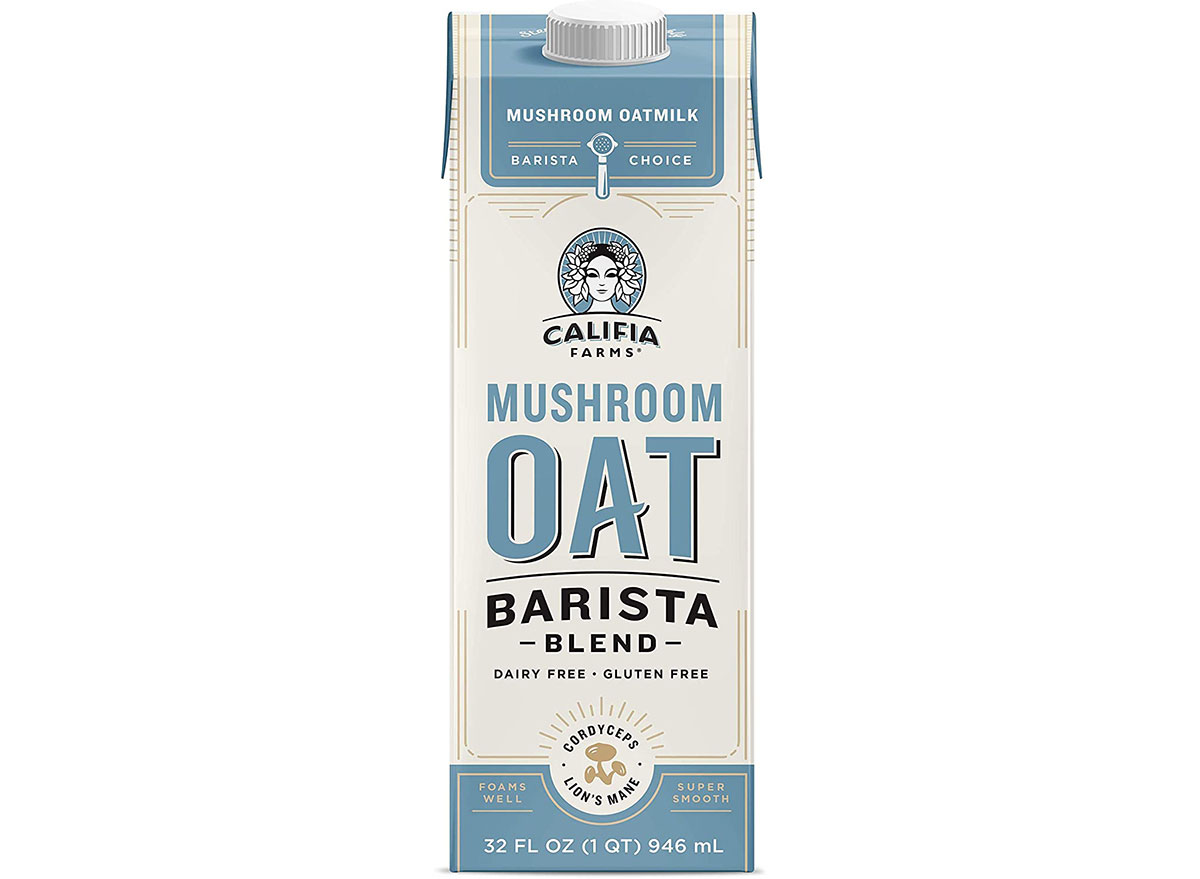 Who would think to put mushrooms and oats together to create a milk? Who knows… but still, it's a match made in health heaven. "This blend uses oat milk and sunflower oil, which is a polyunsaturated fat," Amidor says. "Both the saturated fat and added sugar are zero grams, which is one of the lowest for both these nutrients."

The mushroom comes into play in the form of Cordyceps Extract and Lion's Mane Extract, which Amidor wonders what that does to the taste, but you can be the judge of that. 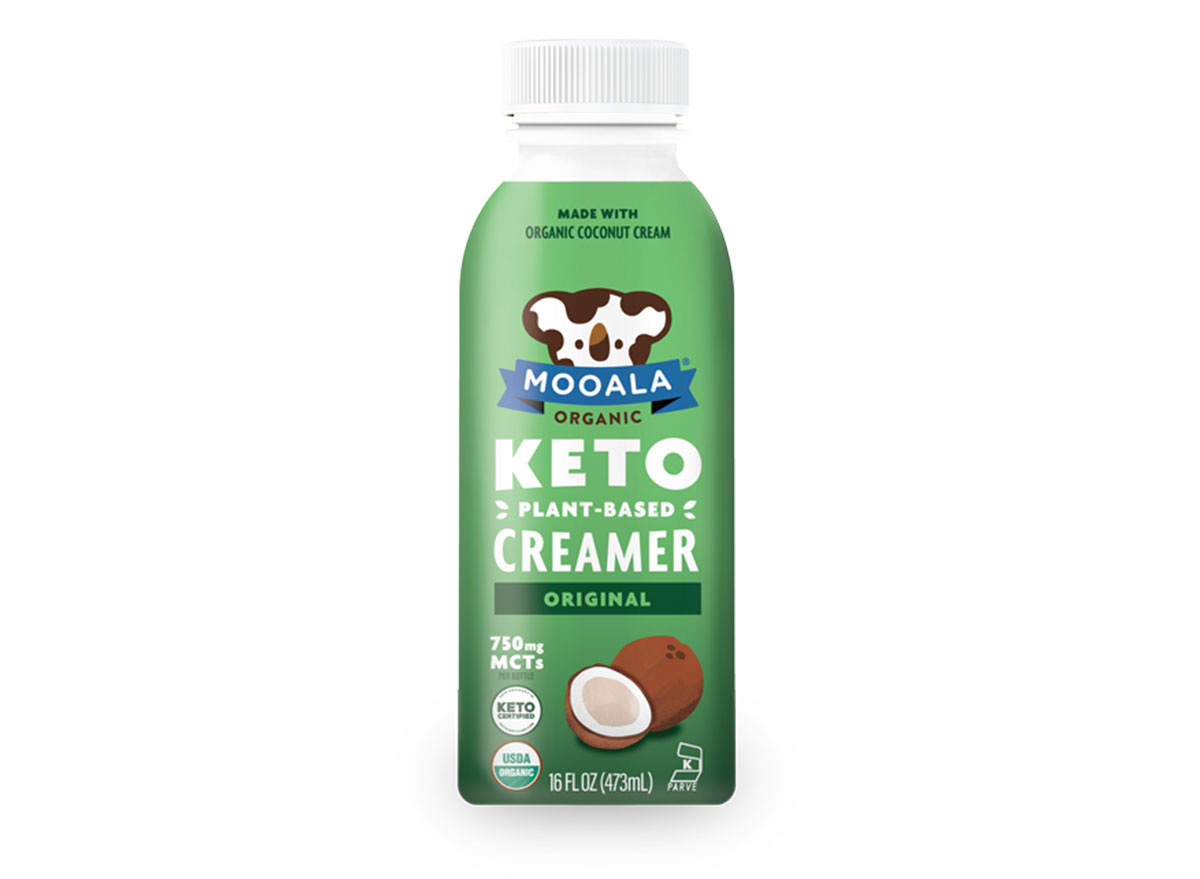 "This keto-friendly creamer is made with coconut cream which is why one tablespoon provides half a gram of saturated fat," Amidor notes. However, "It contains no other macronutrients except fat, which is in line with the keto diet." Keep this in mind if you're looking for a keto-friendly option. 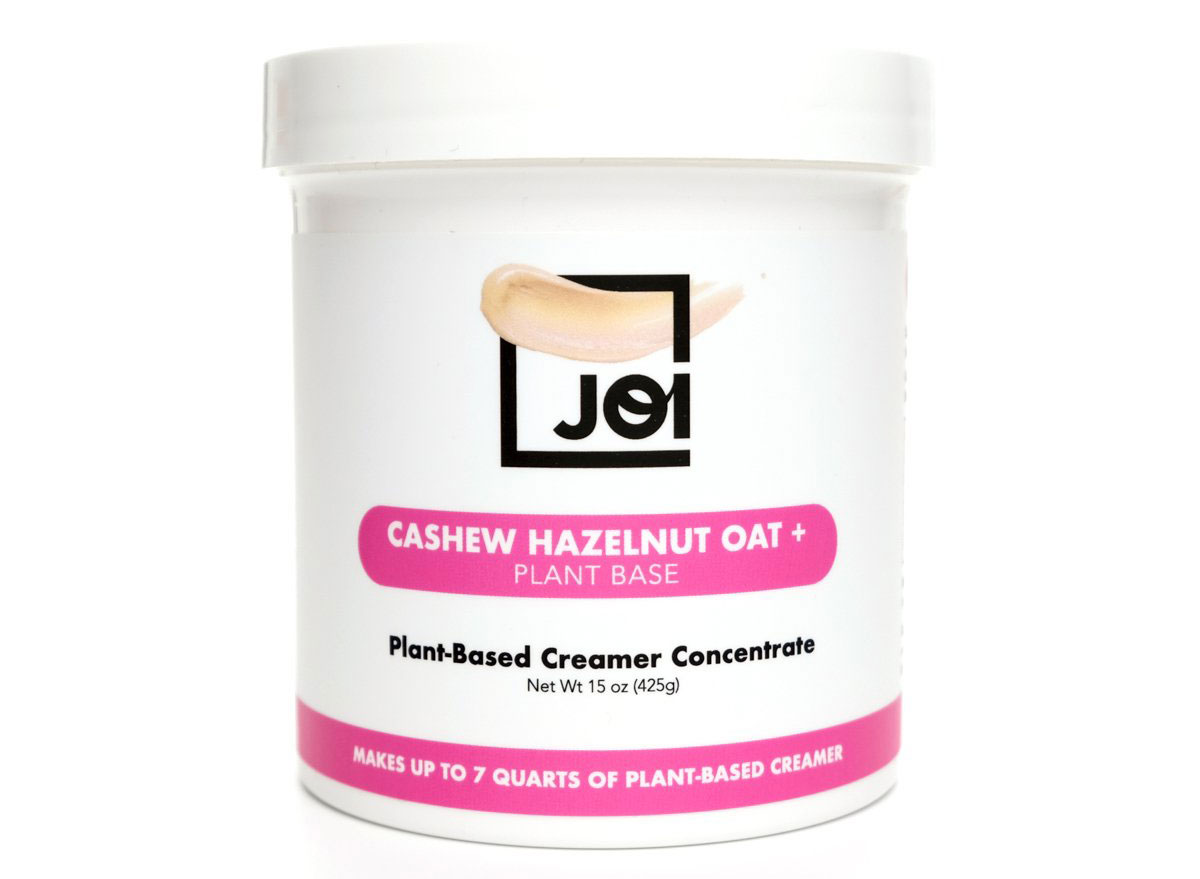 This is another new low-sugar coffee creamer that contains few ingredients. Amidor notes that there are no oils and the only preservative in it is Himalayan salt. Thanks to pea protein, it also has 4 grams of protein per serving, which can help keep you full. 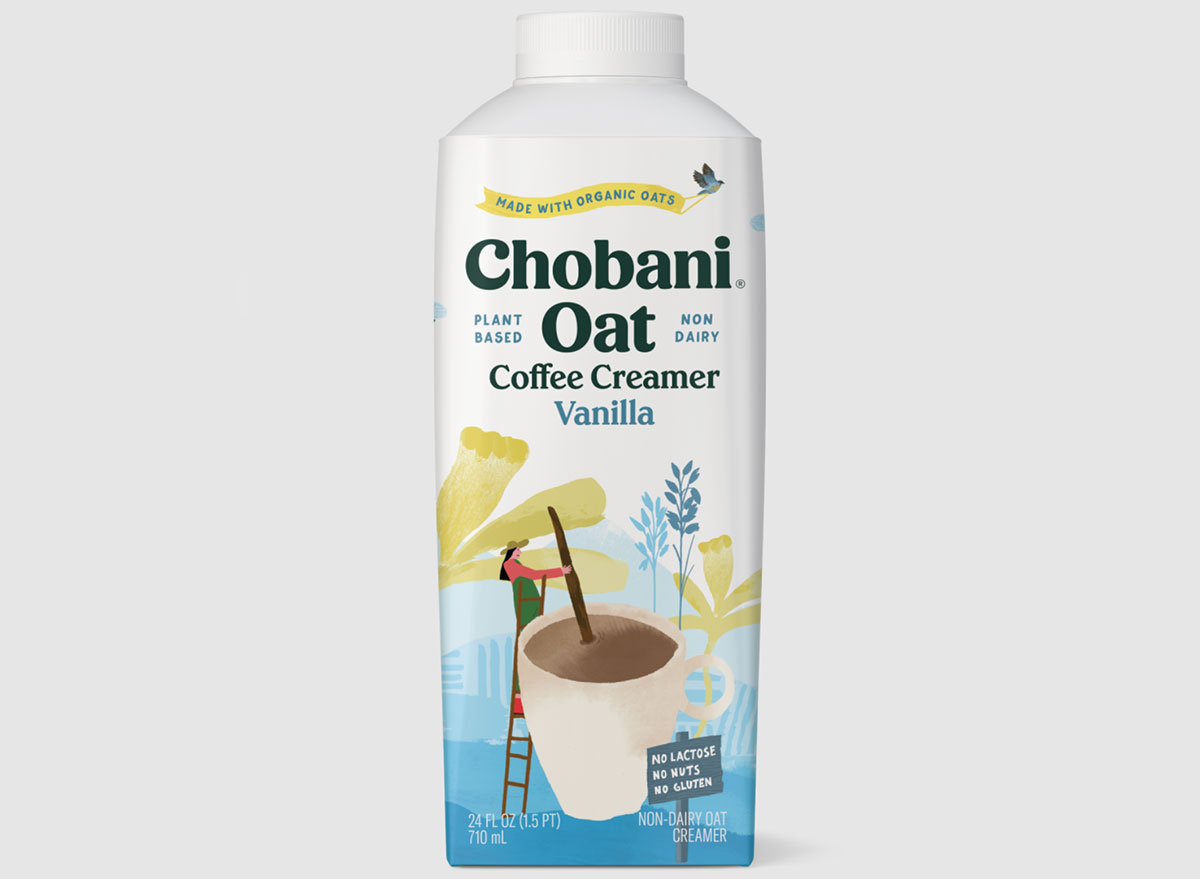 As we've said before, organic sugar is sugar, and it's the second ingredient listed for this new coffee creamer. But the good news is that "It also uses rapeseed oil (AKA Canola) which is a heart-healthy monounsaturated fat," Amidor says.

So, now that you know all the details about these newcomers, which coffee creamer are you going to be looking for in the grocery store?

For more on what you should (and shouldn't) put into your coffee, read up on The Worst Coffee Habit You Need to Quit Right Now.