Find out if this gluten-free alternative is worth swapping your go-to almond milk for.

Non-dairy milks are making a splash this year with endless cartons swarming into supermarkets, cafes, and vegan households alike. In fact, by 2024, the global dairy alternatives market is expected to exceed the $34 billion mark, according to a ReportBuyer report. (That's nuts!) While almond milk is one of the fastest growing segments, health-minded buyers are growing aware of the drink's lackluster nutritionals while eco-conscious folks are becoming increasingly concerned about its unsustainable sourcing methods. So what's the latest plant-based alternative in the lactose-free world? Enter oat milk.

Its core production process is similar to that of almond milk: gluten-free oats are soaked in water, pulverized in a blender, and then strained to produce subtle-tasting plant milk that can be used in anything from coffee to cereal and baking. Sounds too intimidating to DIY it? Oatly, a Swedish brand that's been in the biz for two-and-a-half decades, debuted the first-ever oat milk and introduced it to the U.S. about two years ago. Now, the tricolored cartons are popping up at your local Whole Foods and specialty coffee shops, introducing latte lovers to a new dairy-free delight.

So, you're probably wondering how oat milk stacks up against its almond competitor. Let's take a closer look.

Oat Milk Vs. Almond Milk: How Their Nutritionals Stack Up 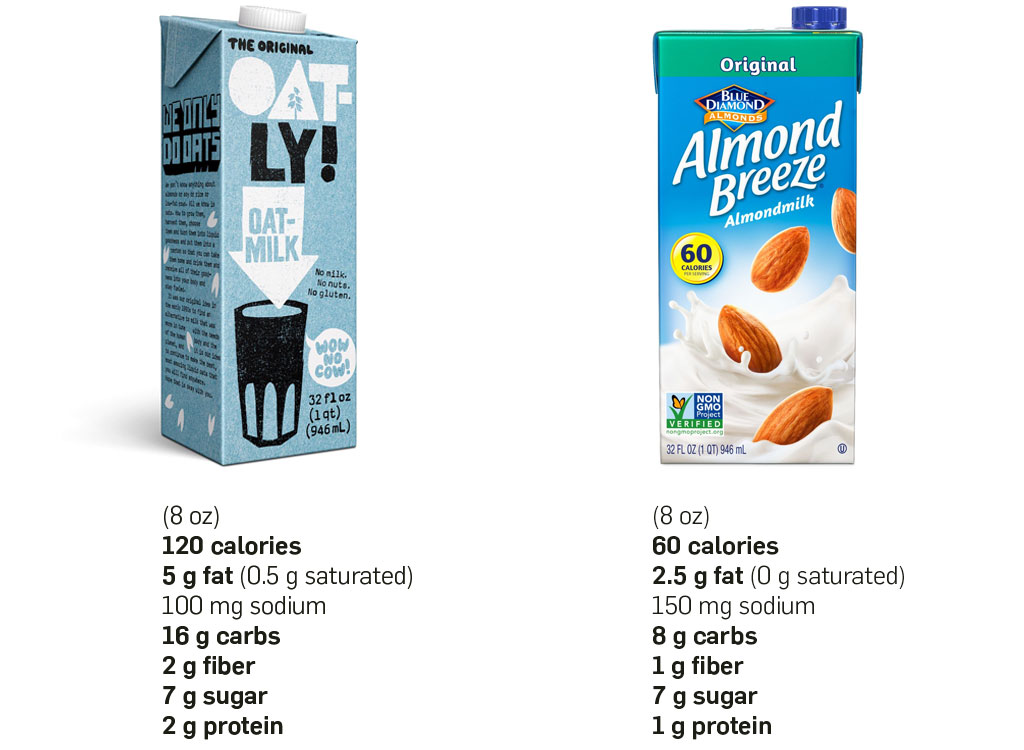 Compare that to Blue Diamond's Original Almondmilk, whose same serving size contains 60 calories, 2.5 grams of fat (0 grams saturated), 150 milligrams of sodium, 8 grams of carbs (1 gram of fiber, 7 grams of sugar), and 1 gram of protein per cup.

While oat milk typically contains a bit more fiber and protein per serving, Oatly's calorie and fat count is double Blue Diamond's—which is not necessarily desirable if you're looking to cut down on calories to lose weight.

As for micronutrients, if you're opting for Blue Diamond's option, you'll get 45 percent of your daily value of bone-building calcium and 50 percent of your DV of vitamin E. On the other hand, Oatly offers only 35 percent of calcium (which is still higher than your average dairy milk's 30 percent calcium content). However, Oatly takes the cake when it comes to metabolism-maintaining vitamin B2, energizing vitamin B12, disease-preventing vitamin D, and DNA-forming phosphorus.

Convinced you should add the whole-grain-based blend to your pantry? There's one thing to consider before you shell out cash: Oatly's ingredient list packs in more than just oats, water, added vitamins, and a bit of rapeseed oil; the recipe also contains acidity-regulating phosphates, which have been linked to ailments such as kidney disease. Phosphates are a common additive in ultra-processed foods such as processed meats and fast food meals. If these foods are staples in your diet or you suffer from advanced chronic kidney disease, phosphate-containing oat milk might not be the best go-to dairy-free creamer for you.

However, if you eat a well-balanced diet, Oatly's oat milk can certainly earn a place in your milk alternative rotation. If you're worried about phosphates, consider giving Elmhurst's Milked Oats a go. While its recipe isn't enriched with vitamins like Oatly's is, Elmhurst shuns phosphates and packs in 20 fewer calories and double the protein. Experiment by splashing it into your morning Joe and adding the drink to your morning oats. (Overkill? We think not!)

April Benshosan
April is a born-and-raised Brooklynite who has a passion for all things health, wellness, and tastebud-related. Read more about April
Filed Under
Drinks // Gluten-Free