Quality oatmeal has lots of health benefits, but that doesn’t mean you should eat it every day.

Oatmeal is properly recognized as a healthy food. It boasts many admirable nutritional qualities, such as being rich in needed vitamins and minerals including vitamins B1 and B5, manganese, copper, iron, and more, according to HealthLine. It's rich in protein and fiber and low in fat. It's nutrient-dense for its per-serving calorie count. Oatmeal is delicious, too, especially when it's paired with fresh fruit, nuts, yogurt, and other healthy additions.

The problem with oatmeal is that often the stuff you buy is laden with not-so-healthy additions, primarily sweeteners. In order to ensure all those health benefits just mentioned are not offset by unwanted ingredients, you have to be discerning and selective when it comes to the oatmeal you eat. And even then it's actually not a good idea for most people to eat oatmeal every day.

Here are 11 secrets oatmeal companies would rather you not know about these globally-popular hulled grains. Plus, don't miss these 22 Meals to Melt Belly Fat in 2022.

Instant oatmeal is laden with sugar. 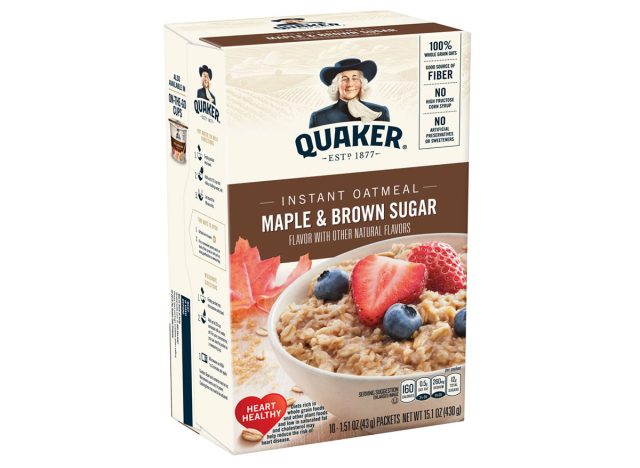 Most mainstream brands of flavored instant oatmeal, such as those from the heavy-hitter in the category, Quaker Oats, are so sugary they just shouldn't be eaten. You'll often find between 10 and 12 grams of sugar per a serving size well under 200 calories. This means you'll be eating nearly a quarter of the total sugars experts recommend in a portion that provides less than a 10th of your average daily needed calories.

Your best bet is to make unflavored oatmeal and to add your own fresh fruit and light sweetener of choice.

Oatmeal can cause bloating.

Starches, glucose, and fiber, all of which are naturally occurring in oats (and some of which may be in even higher concentrations in more highly processed oatmeals) are all on the menu for gut bacteria. And when the bacteria in your system consumes these substances, one byproduct can be gas that leaves you in discomfort or outright pain, and can make your body look and feel swollen. 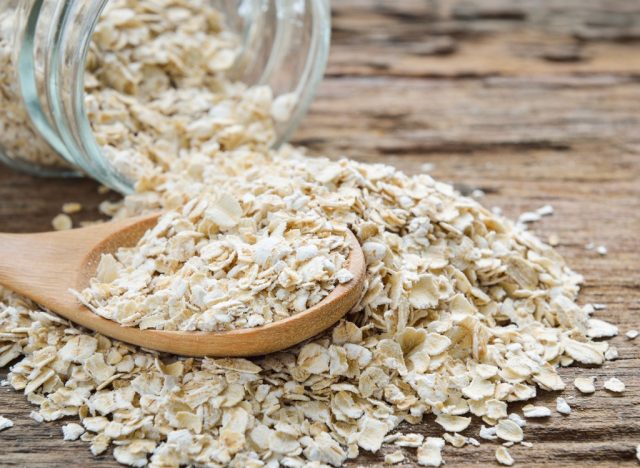 Oatmeal might seem like the ultimate shelf-stable food, and provided you store it properly, it can remain safe and tasty for a number of years. But according to My Recipes, store-bought oatmeal can and will turn rancid, and often in a matter of a year, if you leave it in its original packaging. That's because oatmeal is often packed in paper baggies and/or cardboard packaging, both of which allow humidity, bacteria, and yeast to denigrate the quality of the food.

Oats are often contaminated with gluten.

You know how foods that are technically free of a given ingredient often still list that they were processed in a facility that may have caused exposure to said food? Often that's just an abundance of caution for legal protection, but in the case of oatmeal and gluten, the issue is often real. According to HealthLine: "Oats are often contaminated with gluten because they may be processed in the same facilities as gluten-containing grains like wheat, rye, and barley."

Oatmeal can be dangerous for diabetics.

To be clear, a high-quality, low-sugar oatmeal eaten in proper portion sizes is a perfectly fine occasional food choice for someone with diabetes. However, even a low-sugar oatmeal can cause a blood sugar spike if too large a portion is eaten, according to HealthLine. And because oatmeal can cause slow stomach emptying, it can affect the timing and way in which other nutrients are absorbed, which can also be an issue for diabetics.

RELATED: The Worst Drinking Habits if You Have Diabetes, Say Dietitians

Not all oatmeal is created the same

There are three common types of oatmeal you'll find for sale: steel-cut oats, rolled oats, and quick/instant oats. All of these types of oats have the inedible hull removed and all have health benefits to a varying degree, but they are not created equal. Steel-cut oats are the least processed thus take the longest time to cook yet have the most nutritional value. Quick oats are steamed, crushed, and toasted, so they cook fast but have less fiber and rank higher on the glycemic index. Rolled oats are in the middle ground in terms of processing and health.

RELATED: Are Rolled Oats Just as Healthy as Steel Cut?

Oatmeal can cause muscle mass shedding

You might think of a food that keeps you full for a long time as a good thing, but there can be too much of a good thing in the case of oatmeal. Because eating oatmeal can leave you without hunger for so long, your body may end up shedding muscle mass as it doesn't have the needed nutrients to maintain muscle tissue, not to mention to grow more of it.

It may contain glyphosate

Glyphosate is a chemical compound commonly used to kill off weeds and grasses, according to the EPA. The herbicide is used in proximity to the production of food crops like soybeans, corn, fruits, and, as you likely surmised, oats. Thus the stuff occasionally turns up in oatmeal. Choose a certified organic brand whenever you can to help avoid this compound.

Some oatmeal products are high in saturated fat. 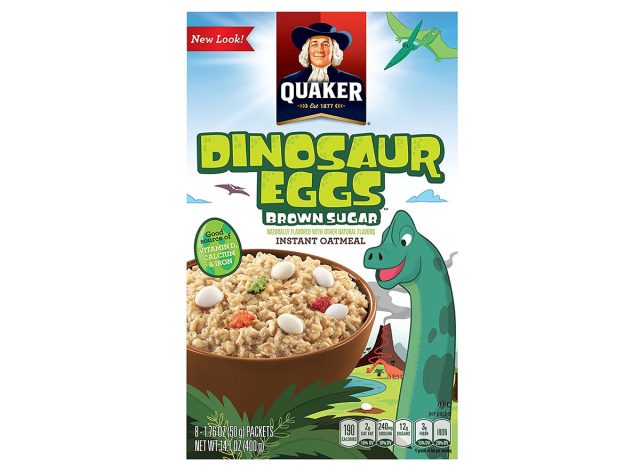 Many parents choose oatmeal as a healthy breakfast choice for their kids, and if the right brand and product is served, it can be. On the other hand, many oatmeal products are high in sugars, as noted, and they can even be high in other unwanted things, like saturated fat. One serving of Quaker Instant Oatmeal Dinosaur Eggs, for example, has 11% of the daily recommended limit for these fats, and in a food genuinely considered low fat.

It may lead to weight gain.

According to Prevention.com, eating oatmeal can lead to weight gain in several insidious ways. First and foremost, unless you are using pre-packaged oatmeal or you are carefully measuring out a portion, you may be eating too much of the stuff and getting many more calories than you need. Second, the blandness of many types of oatmeal can cause you to add to many other ingredients–and unhealthy ones like syrup or sugar at that. And finally, as noted earlier, because oatmeal can leave you feeling too full for too long, it may throw off a regulated eating schedule, which is a surefire way to cause weight gain issues.6254a4d1642c605c54bf1cab17d50f1e

Read more about the best ways to eat oatmeal for good health:

Steven John
Steven John is a freelancer writer for Eat This, Not That! based just outside New York City. Read more
Filed Under
Body Health // Breakfast // Easy Healthy Dinner Recipes